The .380 ACP is little in a lot of ways. But is it big enough where it counts?

Roughly 16 million Americans have obtained permits to carry concealed firearms, and each year more criminals end up on the wrong side of a law-abiding citizen with a personal defense weapon. With the rising tide of CCW permit holders has come a wave of new products to suit their needs, everything from holsters to cleaning kits to sights, to lasers and ammunition. And, of course, there is a whole new crop of defensive auto-loading pistols, too. 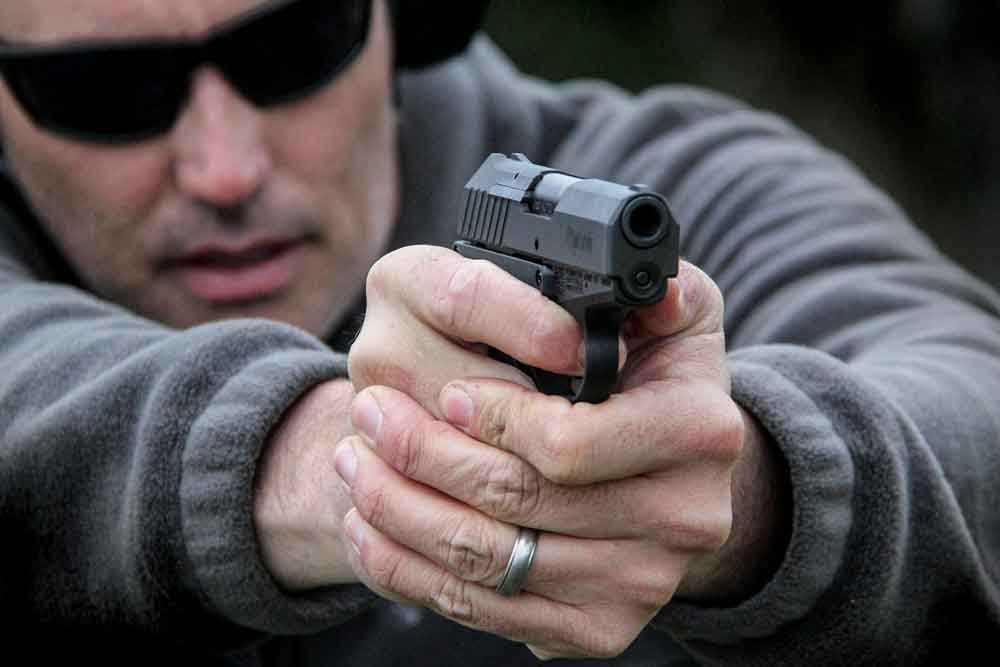 One caliber that has gotten a lot of attention in recent years is the .380 ACP. Designed by John Moses Browning and first chambered in the 1908 Colt semi-automatic pocket pistol, the .380 has been cussed and discussed more than just about any other defensive caliber on the market. Fans of the caliber believe that it’s the ultimate concealed carry caliber because it’s small enough to be chambered in ultra-compact pistols and generates moderate recoil while offering plenty of energy to drop an attacker at close range. There’s another camp, though, that believes the .380 is underpowered and overrated.

So, where does the truth lie?

Probably somewhere in the middle, and that’s due to a number of factors. First, not all .380 pistol options are created equal. Some have better triggers than others. Some are striker-fired, while others are double-actions … and barrel lengths vary. Likewise, not all ammo is created equal. The shooting public is learning that bullet performance (or lack thereof) is critical in a personal defense situation. Lastly, many shooters simply decide on whether a cartridge is effective or not based on personal tastes, and they don’t have any real evidence to back their claims.

With the right ammunition, a .380 can produce effective results based on objective test data. Is it as versatile as a double-stack 9mm? No, but it’s also easier to carry, and that’s the limiting factor for many shooters.

So, how do you choose the right .380 for you and your needs?

Choosing the one that works for you is largely a matter of personal taste, but there are some important differences among the guns listed above. Barrel length was already mentioned; the LCP, RM380 and Bodyguard all have barrels that are relatively short and make them easy to conceal. At 4.25 and 3.66 inches respectively, the barrels of the Browning (full-size version) and Walther guns offer a longer sight radius. I’ve never found that an extra half-inch of barrel length negatively affects concealability (grip design is more important when choosing a gun that won’t print), but it does help with accuracy.

The Angle On Actions

Gun design and action operation are also important considerations. The guns listed above are double-action, double-action-only (DAO), single-action and striker-fired pistols. And while all of these will work, you’ll need to examine the pros and cons of each when selecting the gun for you.

Striker-fired guns, for instance, offer a consistent trigger pull. Double-actions, though, offer more assurance against hard primers; if a round fails to fire because of a hard primer, you can simply pull the trigger once more, and the hammer will strike again. That’s not an option with striker-fired guns, but, thankfully, hard primers are quite rare. Single-action guns require the shooter to operate the safety before firing, but with some practice that becomes intuitive, especially if you only carry one firearm.

No .380 semi-auto is heavy by pistol standards, but there are some real lightweights in this group. Ruger’s diminutive LCP weighs in at a scant 9.6 ounces without an empty mag, and the Remington, Smith & Wesson and Kahr all weigh around 12 ounces. The “heaviest” guns mentioned are the Walther PK380 and Browning 1911-380 (full size), both of which tip the scales at just 18 ounces.

In short, you can rest assured that none of the guns listed here will be too heavy for daily carry. But a little extra heft isn’t always a bad thing; some people, especially new shooters, are recoil sensitive and don’t like the muzzle flip inherent with short-barreled lightweight guns. The .380 doesn’t produce the kick of larger calibers, but in general terms, the lighter the gun, the less effective it is at handling recoil. The guns on the list measure from 5.1 inches to 7.5 inches long and vary from just under to just over an inch wide. Concealment with any of these firearms is only an issue under the lightest, tightest clothing.

Magazine capacity on these firearms runs from six to eight. Again, larger guns such as the Walther and Browning have higher capacities, and that’s important in personal defense. Having two extra rounds offers more time between reloads, which is a serious consideration in a self-defense situation.

Of the many .380 fans I’ve met, only one said they carry a spare magazine, so those two extra shots suddenly become even more significant. One great feature of most .380s is easy slide operation, something not always true of larger-caliber firearms. In fact, I know of at least one individual who has suffered nerve damage, resulting in limited hand strength, and the only semi-auto he can comfortably manipulate is a .380.

The Fit, Feel And Finances

It’s no secret many new CCW permit holders select their new carry gun based on two factors: how the gun feels and the price. You can discuss nuanced features separating one pistol from another, but ultimately a gun that sits well in the buyer’s hand is the one they’ll choose — so long as it is in their budget.

In terms of cost, the guns listed here have MSRPs that range from $229 to $800. Street prices are likely a bit lower, so odds are there’s a pistol in your price range.

Deciding which of these is comfortable is largely personal, but because most of the guns listed include a magazine with a finger extension (or offer these mags as an optional accessory), then only shooters with the largest hands will find they don’t have enough grip space. Shooters with really long hands and fingers might find that it’s difficult to keep from “wrapping” the trigger, so it’s best to spend time at the local gun shop handling each of these guns. Better yet, head to an event like the NRA Annual Meetings where you can examine every gun and get expert advice without the pressure to buy.

Is the .380 an effective self-defense cartridge? Evidence says it can be if the distance is close and you choose the right bullet. Compact, lightweight .380s have the advantage of portability and convenience … and any gun that you have with you in a deadly encounter is far better than one that you’ve left at home.