Choose your EDC knife with as much diligence as you did when selecting your concealed carry companion.

If you carry a gun for protection, chances are good you want a knife to go with it. While your everyday carry piece serves to protect you and your loved ones from a potentially lethal threat, a knife is there to handle an assortment of other tasks, and it can also be used defensively if circumstances require.

I recently traveled to Atlanta to attend the 2017 Blade Show, an event that’s billed as the largest knife show in the World. Among the vast array of blades, I found eight new knives by some of the top knife manufacturers designed for everyday carry.

Some of these blades represent the cutting edge in blade tech. Others are the newest great buys for the money, and good American manufacturing made the rest.

Whether tucked into your jeans pocket, tossed into your car’s glove box or tucked in your briefcase, here’s what these knives have to offer. Automatic knives will only become more popular thanks to the recent trend of states legalizing the carry of switchblade knives within their borders. Bear and Son’s automatic Bold Action V is the kind of knife that invites everyday use thanks to its subtle tactical features with a price that won’t break the bank. With an MSRP of $149.99 to $154.99, the Alabama-made knife is an inexpensive buy for an automatic, which requires tighter manufacturing to create a mechanism that will fire again and again.

It’s easy to find the button that fires this side-opening auto, and the lock to prevent the accidental discharge of the knife in, say, a pocket, lies millimeters away. With the dual-colored G10, the Bold Action V doesn’t have the full-on tactical look. The one-hand opening knife with tanto blade means that it’s a knife comfortable at home, on the gun range or for a nice night out on the town. Over the years, Benchmade has developed a reputation for crafting high-quality, American-made blades, although some of the manufacturer’s pieces do cost a few Benjamins. But one of the newest knives the company brought to the Blade Show was the Freek, a utilitarian knife with an MSRP of $130 — and a notable handle.

To create the grey Grivory and black Versaflex over-molded handle, Benchmade looked to grease monkeys and their high-end hand tools, nothing that mechanics use those tools for long periods of time in environments that don’t exactly contribute to secure grips.

“We worked with hydraulic mechanics on their preferred ergonomics and materials for tools that are easy and comfortable to use, as well as more durable than the competition,” said Madelyn McGill, marketing coordinator at Benchmade.

Additionally, the 3.6-inch blade on the knife is made from S30V stainless-steel, a metal designed for high-performance knives. Finally, the knife locks up with Benchmade’s proprietary Axis lock, which is as easy for a southpaw as it is for a righty to use.

As a result, “The Freek is 100 percent EDC [everyday carry],” McGill said. “It was designed for someone who regularly uses their blade, looking for comfortable, lightweight performance and a good value.”

The helicopter crash broke Green Beret Jeremy Valdez’s shoulder and injured his head. It was 2009, Western Afghanistan. Crew and soldiers were still in the burning wreckage when Valdez climbed back in to save as many as he could, according to his bio on the Green Beret Foundation website.

Ten people died in the crash. Although Valdez rescued five lives, the small folder the Green Beret carried didn’t meet the demands of the situation. It failed, according to CRKT. Afterward, Valdez designed the Septimo to create a better soldier’s backup blade, and it’s named Septimo as a tribute to the Seventh Special Forces Group.

The lone serration at the base of the blade is designed to rip through seatbelt webbing. The flipper opening mechanism on the knife allows the 3.622-inch blade to come into quick play and gives a hefty finger guard while in use. An aluminum handle, with an inlay to provide grip combined with a black oxide finish, gives the Septimo a get-it-done attitude. And, the tanto-style blade made from 8Cr14MoV stainless-steel brings a tactical sensibility. Hogue is already a well-known name in the gun world thanks to its accessories such as pistol grips and stocks. When it rode into the Blade Show, it wasn’t hawking its lineup of great boom-stick products, though. Instead, the company was introducing the world to some of its latest and greatest knives, including the automatic Hogue EX-A05.

The EX-A05 has the feel of some tight designing and even tighter manufacturing behind it. It’s a blade designed by custom knifemaker Alan Elishewitz, and the spear-point blade features the lines of a futuristic shark while the crisp curves of the handle are constructed from 6061-T6 aluminum. Press the large button to the side of the pivot pin and then the blade — either 3.5 or 4 inches, depending on the type of EX-A05 — snaps to attention. Closing the knife is equally as intuitive: Unlock the knife by pressing the push-button lock and fold the blade under spring pressure back into the handle.

Hogue grinds its blades from CPM154 stainless-steel, which is part of the reason why the MSRP on this American-made blade ranges from $229.95 to $279.95. Price all depends on whether consumers want a spear-point or Wharncliffe blade, an insert in the handle or a different color of aluminum. 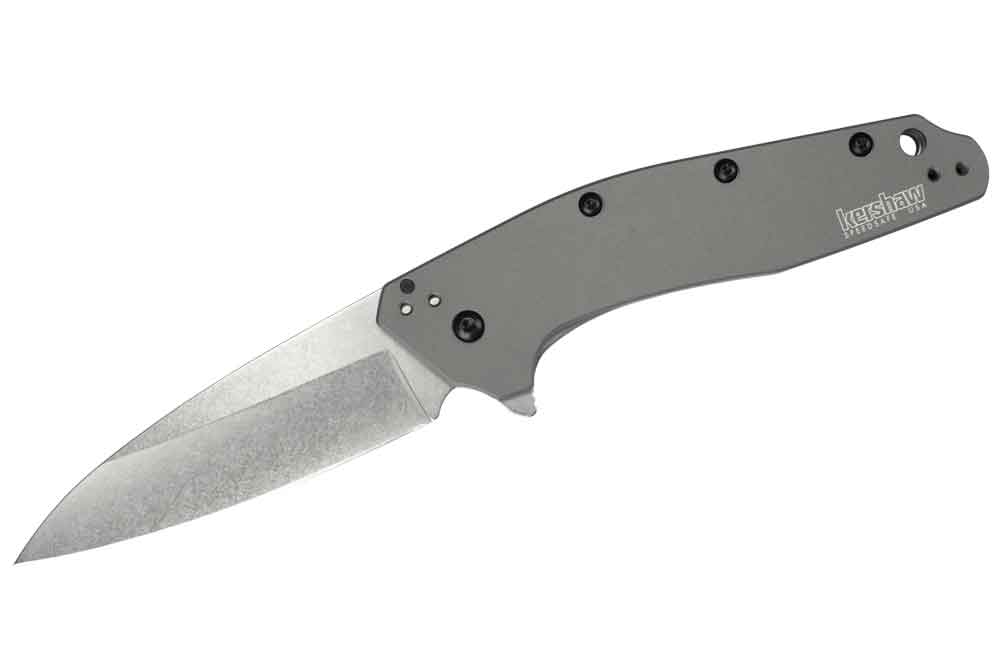 For people who only want to pay a few dozen dollars when purchasing their knives and still buy products made in the good ol’ United States, knives that fit their criteria are few and far between. It’s no secret that China and Taiwan have most of that market all locked up.

This year, however, Kershaw Knives won 2017 “Best Buy of the Year” award at Blade Show for its American-made Dividend.

“In 2016, we challenged our Kershaw designers and engineers to come up with a knife that we could produce in our Tualatin, Oregon, manufacturing facility — and that could also be built at an affordable price,” said Thomas Welk, director of sales and marketing for Kershaw and ZT Knives.

The result is an aluminum-handled knife with a 420HC blade with a stonewashed finish. Kershaw designed the new Dividend to be light and easy to carry with its 2.8-ounce weight. MSRP for the Dividend is about $70, but it will have “a street price of about $39.99,” Welk said.
To open the knife, simply press the flipper opening mechanism. Once the arc begins to spin, Kershaw’s assisted opening takes over and the 3-inch blade snaps straight. The SR-11 is a Ferrari of a knife. The blade created by Italian manufacturer LionSteel earned the 2017 “Overall Knife of the Year” award at the Blade Show.

The SR-11 is an update to a design that LionSteel took to the 2010 Blade Show. That design won the best overall award then because LionSteel machined the handle from a single piece of metal — one of the first production knives to do so. The SR-11’s lines flow more aggressively than the SR-1, though, and it has a different design machined into the surface of the handle. It also opens with a flipper mechanism.

“Beyond the expensive materials used, the time, precision mechanics and technology needed to work on the solid pieces, what makes a knife high-quality is the attention for the details during every step in the manufacturing process,” said Andrea Mazzoli, who works with the Consorzio Coltellinai Maniago Srl (Maniago Knife Makers Association), which helps represent LionSteel.

The 3.7-inch blade of Sleipner tool steel flies open on a set of IKBS ball bearings, and a tungsten carbide glass breaker sits in the pommel. To make it your constant companion, buying a titanium-handled SR-11 will cost you 330 Euros … or about $370. My first impression holding the Ontario Knife Company’s Dozier Arrow was the lightness of the knife. It’s got a slender blade and G10 handles that are not weighed down with metal liners. The result is one of those knives that melt away in your pocket only to reappear when you need something cut.

With its symmetry like a dagger, the Dozier Arrow stands out in a world proliferated with asymmetric knives. Yet this knife designed by famed knifemaker Bob Dozier isn’t double edged — which keeps you on the right side of the law in many locales.

Buying this knife from Dozier’s shop costs more than four times Ontario Knife’s MSRP of $79 for the design. To make it, Ontario Knife grinds the 3.63-inch blade from D2 tool steel, the same steel that Dozier uses because it’s proven to hold an edge. The Taiwan-built knife opens with a thumb stud on the blade, but the stud sits nestled in the handle — almost flush with it — until a push with your thumb guides the blade along its arc. Sometimes, a small knife just won’t do. Most people carry something with a 3- to 3.5-inch blade, and they do so for good reason: Lots of states and cities restrict blade length. But in places where the law allows larger blades, you might prefer to carry something bigger. After all, the Bowie knife was an everyday carry knife in its time. And as the character Crocodile Dundee said in the 1986 movie, “That’s not a knife … this is a knife.”

The first model of the Spyderco Police, issued in the 1980s, was one of the first knives to feature a pocket clip and a hole in the blade so that users could open it one handed. As the name implies, Spyderco designed it for those who walk the thin blue line.

In the updated design, the blade comes in K390 steel. Gone is the stainless-steel handle; instead, the Police 4 comes in a black G10. And although the Police 4 is slightly larger than its predecessor, it loses more than an ounce and a half of weight, coming in at 4.3 ounces. Open, the Police 4 features a 4.4-inch blade and a knife that stretches 9.95 inches overall, which is enough to make Crocodile Dundee proud.