Pistols chambered for .380 ACP have grown in popularity due to their compact size and concealability. But does the round bring enough to the table to be viable for self-defense?

Nearly three-quarters of a century ago, on January 30, 1948, Hindu nationalism advocate Nathuram Godse carried out an assassination. At 5:17 p.m., he used a possibly stolen Beretta M1934 to shoot Indian independence leader Mahatma Gandhi three times in the chest, point-blank. In doing so, Godse sealed his own fate — he would be hanged in 1949 — and made Gandhi a martyr to his cause. The Beretta used was chambered in 9x17mm Corto, another designation for the cartridge more commonly known stateside as the .380 ACP.

Gandhi’s assassination is just one of many instances — famous and otherwise — where the cartridge has been utilized with deadly results. Does this mean the .380 ACP is a powerful round, or is it only fatal in rare instances? When John Moses Browning designed the .380 ACP in the early 1900s, he built it for the era’s blowback pistols, specifically the Colt Model 1908 Pocket Hammerless. Blowback-operated pistols lack a barrel-locking mechanism; the combination of the slide’s mass and the recoil spring’s strength bear the brunt of recoil.

Today, many pistols chambered in the cartridge follow the original blowback design, but others use a locked-breech action in which the slide and barrel initially recoil in tandem, but then the barrel stops moving while the slide continues rearward (of course, variations abound). Browning’s design might be more than one century old, but it continues to influence the firearms world to this day.

When it comes to the .380 ACP, gun owners tend to love it or hate it — middle ground is uncommon in the “great caliber debate.” Many claim it’s too small, and it is, indeed, a diminutive cartridge. It has an overall length of .984 inch, a bullet diameter of .355 inch and a maximum pressure of 21,500 psi.

When compared to a cartridge such as the 10mm with its SAAMI overall length of 1.250 inches, bullet diameter of .400 inch and maximum pressure of 33,000 psi, it appears even smaller. However, the .380 vs 9mm, with its matching bullet diameter of .355 inch, the issue becomes more complex.

So, what it comes down to is real-life performance. In the gun world, ballistic knowledge is power, so let’s take a look at how the .380 ACP performs in gel tests and wound studies.

Ballistic gel is the medium used by manufacturers and writers to test the terminal ballistics of various bullets. Protocols for its use are typically based on the FBI’s ammunition test, which the agency undertook almost 30 years ago following the Pyrrhic victory of the 1986 FBI Miami Shootout, during which two agents were killed and five were wounded in a firefight against a pair of serial bank robbers. The shootout brought up questions regarding caliber capabilities, and the ammunition testing protocols the FBI created a few years later remain the guidelines to this day.

According to the protocol, bare gel or gel covered by heavy clothing, automotive sheet metal, wallboard, plywood or automotive glass is shot from a distance of 10 feet. Bullets must then penetrate to a minimum depth of 12 inches to be considered effective, a number based on anatomical averages and the belief that erring on the side of too much is better than too little. When the FBI performed their tests in 1989, they used 24 tons of gel, and measurements were made blind — agents didn’t know what caliber they were measuring — for statistical accuracy.

As for ammunition, there are untold numbers of manufacturers in the United States, thanks to startups and relatively unknown or new companies, but there are only a few dozen that are well established and even fewer well-known manufacturers. For the purposes of this test I used defensive .380 ACP loads from Federal Premium Ammunition, Hornady, Barnes Bullets, Dynamic Research Technologies (DRT) and Snake River Shooting Products (SRSP) Team Never Quit. The variation of loads among these established brands made them ideal for comparison. Handguns used included the Ruger LCP II, Kimber Micro Advocate, Remington RM380, Glock 42 and Browning Black Label. Some data was supplied by manufacturers.

So, what do all these numbers mean? Going by the FBI’s protocol requiring a minimum penetration depth of 12 inches, frangible HPs such as DRT and SRSP Team Never Quit come close — but not quite — while rounds such as Barnes’ TAC-XPD fall noticeably short.

Analyzing Wound Cavities
Although ballistic gel is designed to simulate the density of human tissue and potential resulting wound cavities, nothing beats going to the source. Numerous gunshot wound studies have been done by surgeons, coroners and, of course, the FBI. This means there’s a decent amount of data readily available.

As reported by Dr. Andreas Grabinsky, the program director for emergency and trauma anesthesia at Harborview Medical Center, which is the only Level I trauma center in Washington State, approximately 76 percent of gunshot wounds are from handguns. Dr. Grabinsky also states relevant wounding factors include bullet diameter and penetration depth, both of which correlate to tissue damage. Tissue damage refers to the temporary and permanent wound cavities a bullet creates; the immediate, temporary cavity occurs when the bullet enters, but it quickly collapses, resulting in the permanent cavity. Dr. Grabinksy repeatedly states the significance of penetration, saying even millimeters matter when it comes to damaging vital organs, blood vessels or arteries. He references experiences of gunshot wound victims shot by calibers 9mm and smaller — which includes the .380 ACP — having had no problem walking around and functioning anywhere from seconds to minutes after being shot.

In 2006, a coroner wrote a report titled, “Terminal Ballistics as Viewed in a Morgue.” He stated he performed an average of 8.2 autopsies a day and chose to be blunt in his findings. “I absolutely despise a 9mm for defensive situations … and a .380 ACP as well,” he wrote, adding he will “take a slow-moving .45 ACP to a gunfight any day.” In addition, he stated that when a gunshot wound victim crossed his autopsy table with multiple rounds in their bodies, those bullets were typically .380 ACP or 9mm, while single-shot gunshot wound victims were usually shot by .40 S&W or .45 ACP.

Finally, there’s the real-life experience of now-retired police Sergeant and US Army veteran Tim Crawford. Sergeant Crawford made his feelings immediately clear: “Never .380 ACP as a defensive round. I made a run one night on a guy who had been shot 7 times with a .380 ACP. It was a drug deal gone bad. [After being shot] the guy whooped the shooter’s ass and took his gun away from him. Made my mind up on it. And the guy lived.” From a medical perspective — and here I delve into my own relevant experiences in my past life in emergency veterinary medicine — there’s no denying that a bigger hole drops an assailant faster, as they lose vital fluids. Hydrostatic shock is an oft-argued reality influenced by factors such as velocity, proximity, placement and bullet diameter. Larger diameter bullets also mean a better likelihood of striking vital organs and breaking through bone, rather than potentially ricocheting harmlessly away. Other factors also come into play, such as psychological state and the ingestion of drugs capable of spiking adrenaline and strength.

Ballistics has come a long way in recent years, with vast improvements in propellants and bullet designs. But even with those improvements, some things haven’t changed. For example, bullet diameter for a given round hasn’t suddenly increased. From a self-defense perspective, the .380 ACP performs to its greatest ability at close ranges, and by close I mean less than 3 yards — closer is even better.

And, as always, shot placement is king.

Trauma center studies report cranial shots to be the deadliest, with multiple close-range center mass shots —those striking vital organs or arteries — being second deadliest. In short, a .380 ACP is best served as your BUG (backup gun), the pistol you pocket or ankle carry as insurance. 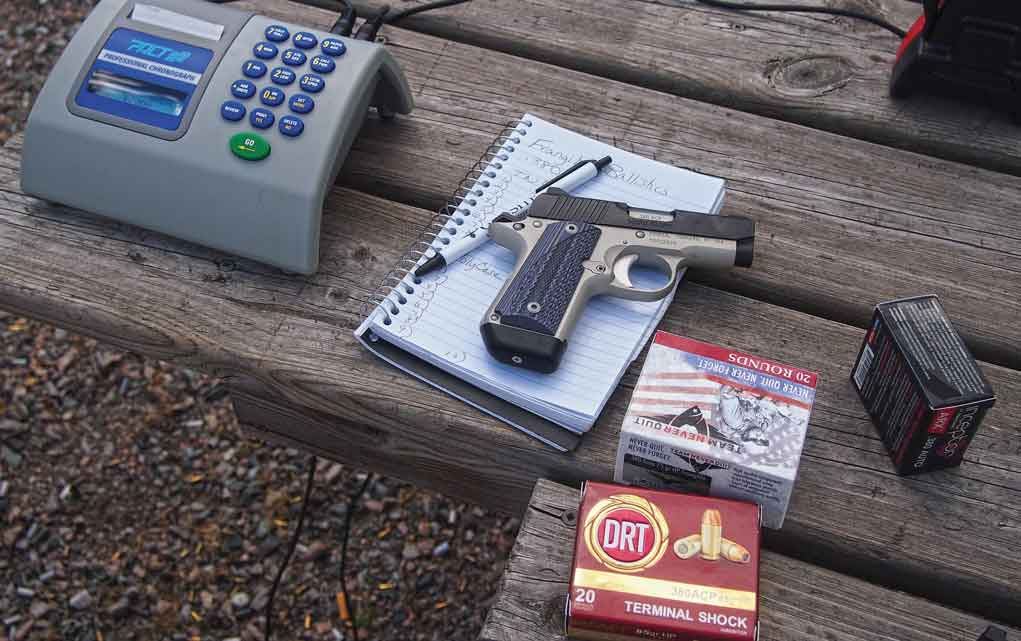 This is not to disparage the .380 ACP, but it’s simply to state the facts medically, in terms of ballistics and based on the personal experiences of law enforcement officers and doctors. It’s enjoyed popularity for some time now based largely on affordability and concealability — which are undeniably fantastic — but where gun owners tend to go wrong is in utilizing it as their EDC (every day carry). There are situations where a pocket pistol is the only option due to legalities or other matters, but throughout our 50 states, those scenarios are the exception to the rule.

The late Col. Jeff Cooper once said, “The first rule of gunfighting is to have a gun.” It’s a good rule to follow, meaning any gun — even one of a smaller caliber — is better than no gun at all. A gun collecting dust in your safe does you no good, so get the gun you’ll actually train with and carry. Of course, Cooper also said, “Perhaps the first thing you should demand of your gun is that it be unfair.” Do you think a .380 ACP gives you an “unfair” (read: good) advantage over an attacker? Based on the aforementioned facts, I don’t think it does. Not at all.

And I, for one, want that unfair advantage.