In the modern era of firearms, one type of gun seems to dominate all others — the semi-automatic pistol.

The fast-shooting handguns allot superior firepower, fast reload times and dead-on accuracy. And nowadays, they’re everywhere — from concealed carry holsters to the deer woods. The development of the semi-auto pistol has been marked with some icons that stir the imagination of any true firearms nut. With that in mind, we're going to look at Six Must-Have Classic Centerfire Semi-Auto Pistol that are solid additions to any holster or gun safe.

What are some of the true classic semi-auto pistol designs?

Aside from the Colt Single Action Army, no other pistol stirs more emotions than the M1911. Then again, few firearms have seen the action and performed as valiantly as John M. Browning’s short-recoil miracle.

The dominant sidearm for the U.S. military for the majority of the 20th century, the M1911A1 stormed the beaches of Normandy and patrolled Vietnam’s Mekong Delta. Even after its retirement as the military’s official service pistol in 1986, an act of sacrilege to some members of the armed services, the .45 ACP has remained a staple on the modern battlefield.

Adopted in 1911, the original M1911 was a response to the poor showing by the Colt M1892 revolver against the Moro guerrillas in the Philippine-American War. The .38 Colt just couldn’t put down these determined adversaries, so the military called for a new service pistol, one that would be at least a .45 caliber. Browning’s pistol performed nearly flawlessly in the ensuing military trials, not failing once in the torturous last leg. Despite its already strong design, the M1911 was tweaked in the inter war years with the relatively minor modifications, and then designated the M1911A1.

The iconic single-action semi-automatic lives on today in nearly perfect renditions of the original models and tricked-out versions purpose built for everything from concealed carry to competition. Heck, even if you demand the real McCoy, there are plenty of the original military models floating around. But any way you go, no gun safe is complete without this true American classic. 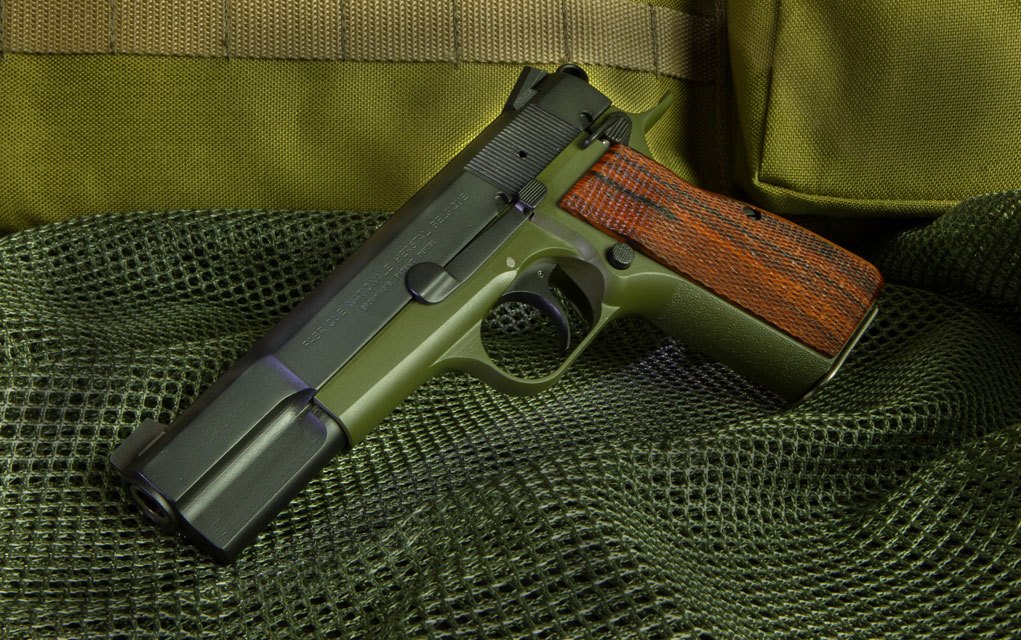 This is yet another pistol with John Browning’s fingerprints all over it. But the gun genius doesn’t get to take sole credit for one of the most prolific military sidearms of all time. Browning died well before the Hi-Power was finished, leaving his protégé at FN, Dieudonné Saive, to put the final touches on the pistol and see it through to production in 1935.

The 9mm had a rocky road from drawing board to cold, hard steel. Much of this was due to the French Military dragging its feet on adopting the pistol, which turned out to be a blessing in disguise. This indecision allowed time for patents to run out on another Browning classic — the M1911 — that Saive borrowed heavily from to come up with the Hi-Power we know today.

Like the 1911, the Hi-Power is a short-recoil, single-action semi-automatic, in principle operating identically to the American icon. But there is a notable difference between the pistols, in particular how their barrels unlock. The Hi-Power uses a cam arrangement actuated by a hardened bar in the frame, opposed to the 1911’s toggle link. As minor as it might seem, this point would have a major ripple effect on the gun world, dominating semi-auto pistol design up to present date.

Arguably the major factor for the Hi-Power’s profusion, adopted by more than 50 militaries across the world, is capacity. With 13 rounds of peppy Parabellum — nearly twice that of other semis of the day — the pistol gave operators a decisive advantage.

In America it might not hold the same prestige as Browning’s 1911, but everywhere else the Hi-Power is king of the world.

With its connections to the Third Reich, this semi-automatic has more sinister overtones than perhaps any other pistol created. But purely from a firearms enthusiast’s standpoint, the P08 is a near work of art. The Luger, as it’s better known, saw extensive combat in both World Wars, was a major factor in popularizing the 9mm, and might be the coolest pistol to come down the pike.

What makes it so dang appealing to gun cranks is its toggle-lock action. The Luger was perhaps the best-known example of this form of short-recoil operation, but it is not the sole one to utilize the design. Georg Luger’s close friend Hugo Borchardt developed his C-93 pistol around the toggle lock, inspired by the Maxim machine gun’s use of it. As an aside, the toggle-lock mechanism is found in much earlier firearms designs, such as the Volcanic rifle.

The system made the Luger deadly accurate, since there was very little barrel movement in the course of firing. And it allowed for a certain amount of resiliency in the system. The Luger could still operate even with a budged barrel, since it wasn’t shrouded by a slide.

But as is always the case in any engineering endeavor, there were tradeoffs with the Luger. In this case it was complexity and cost — one led to the other. The slick little 9mm cost as much as three Mauser rifles out of the box, with perhaps half or a quarter of the battlefield utility of the bolt action.

Still, the German soldiers couldn’t get enough Lugers, with millions produced up to it being replaced by the Walther P-38 in 1938. And today, collector and shooters with a yen for true classics still flock to this wicked little pistol.

Carl Walther had a tall task ahead of him in 1930s Germany — build an economical military pistol that would outperform the beloved Luger. He went one better and changed the combat pistol world.

The P38, adopted by the German military in 1938, was the first service pistol outfitted with a double-action/single-action trigger. And by all accounts, it was the first pistol to combine this fire control with a locked breech. The configuration has since swept militaries and police forces around the world, even going so far as replacing the U.S. Army’s beloved 1911 in the form of the Beretta M9.

The P38’s DA/SA trigger gave it a leg up on many of its contemporaries. Generally, pistols such as the M1911 were supposed to be carried in condition 3 (hammer down, chamber empty), meaning the slide must be racked to get it into action. On the other hand, the P38 only took a squeeze of the trigger to send a round down range.

The P38 configuration was groundbreaking for its time. Before, DA/SA was strictly a blowback operation affair, found in near equal Walther classics, the PP and PPK. Carl Walther actually made a run at the military contract with a scaled-up version of the PP — Model MP — also chambered in 9mm. But the round proved too powerful for the design.

The eight-round 9mm was well-regarded by the troops as a reliable and accurate pistol that delivered when called upon. And unlike its predecessor — the Luger — it was painfully simple to troubleshoot in the field.

The P38 definitely stole some aesthetic points from the Luger. But there is no arguing Walther’s service pistol stands in a class of its own. If imitation is truly the highest form of flattery, then there are plenty of gunmakers fawning over what this pistol brings to the table. Few other handguns in the modern era have spawned more clones and outright copies than this Eastern European masterwork.

Sure, much of copycatting is do to the CZ 75’s designer, František Koucký, hamstrung when it came to international patent protections. But it also had a great deal to do with his 9mm being one heck of a pistol in and of itself. It wasn’t called a “Wonder-Nine” for nothing.

What the CZ 75 brought to the table was large capacity mated with a well-designed double-action/single-action trigger. The Czech masterpiece could rattle off 15 rounds like it was telling bad jokes, which, especially in competitive circles, turned heads immediately. And, overall, its trigger got high marks — smooth in double action and snappy in single.

On top of that, it had a unique aspect when it came to DA/SA pistols — it could be carried in condition 1. Going “cocked and locked” appealed to many (once again, think competitors) and is a rare feature on this style of pistol.

While the CZ 75 clones are innumerable, it is easy to see the pistol’s roots are sunk deep in another classic design — the Browning Hi-Power. This includes the Czech gun’s lines and cam system to unlock the barrel. But Koucký put his own twist on the pistol, such as the slide riding inside the frame rails, counter to most semi-automatics.

While there is ample opportunity to get a hold of a CZ 75 in function only, it’s worth holding out for the actual number. After all, there’s a reason why everyone wanted to copy the original.

What can an engineer with no background in firearms and a familiarity with cutting-edge materials do to the gun world? How about turn it on its ear.

Gaston Glock’s Glock 17 wasn’t the first polymer-framed pistol to hit the market, but it certainly was the first successful one. Though, in all truth, the word success misses the mark, because the little 9mm, initially designed as an Austrian service pistol, did a whole bunch more. It essentially redefined the market from 1982 on.

The Glock 17’s reduced weight, simple design and natural shootability made it a worldwide sensation and an instant classic. And it took a blink of an eye to achieve. After assembling a team of European shooting and firearms experts to offer design points, it was only months before Glock came up with the prototype he’d submit to the military trials.

Aside from materials, the other revolutionary design point is the Glock 17’s trigger. The double-action-only trigger (called ‘Safe-Action’ by Glock) offered one of the most consistent pulls to that date. Squeeze after squeeze, the striker-fired trigger breaks at a predictable 5.5 pounds — a big boost to any shooter’s accuracy potential.

Of course, shooting a Glock comes at a cost — the 17 and its blocky black cohorts have all the charm of a sod house. But when your life is in the balance, Glock’s ugly is plum beautiful.