The .45s are a very versatile group of cartridges, ranging from the .45 Colt on the bottom end up to the high-velocity champ, the .460 S&W Magnum, at the top end. My personal favorite is the smallest and lowest pressure producer, the .45 Colt. Lower pressure leads to lower recoil and lower noise levels. I don’t place a premium on velocity potential, but there is no denying that increasing velocity increases the range of effectiveness, if you want to reach out a bit farther than typical handgun hunting distances.

What are the hard-hitting .45s?

This segment really is the story of two cartridges. Born in 1873, this old black-powder cartridge never seems to get its just due. Think of the .45 Colt as the Rodney Dangerfield of big-bore handgun rounds (a reference older readers will get!). Rarely is it loaded to potential from the factory because of the vast number of older revolvers in circulation that are incapable of handling the higher pressure, modern smokeless loads that would most likely reduce them to shrapnel. Basically, full-power loads in those old guns are lawsuits waiting to happen. So, due to liability issues, the .45 Colt is rarely ever viewed in the same vein as the .44 Magnum.

No slouch even in black-powder form, the .45 Colt in modern times really takes on a different persona. Load it to its full potential, and it will give the much-vaunted .454 Casull a run for its money and leave the .44 Magnum sucking wind in its rear-view mirror. But before you roll out the hate mail, keep in mind that I own at least a half-dozen .44 Mags of all shapes and sizes. It’s just that I am a bigger fan of the modern .45 Colt. If there ever was a do-it-all cartridge, the .45 Colt would be at the top of the heap.

Gun scribe Ross Seyfried is also a big fan of the .45 Colt and chose one to use against Cape buffalo in the mid-1980s. Seyfried evidently had a great deal of confidence in the capabilities of the round — when loaded to potential — and his own ability on the trigger. In an article in Handloader magazine, while discussing the merits of the .44 Magnum, Seyfried said, “In the midst of this I began working in Africa. It was a handgunner’s paradise. Plenty of deer- and elk-like critters could be stalked within honest handgun range. Many could be taken with the .44 Magnum, but I always felt like I was asking a boy to do a man’s job.” Almost losing a trophy kudu shot with his trusty .44 Magnum further exposed that round as an underachiever of sorts on really huge game, and Seyfried’s confidence in the .44 Magnum fell. About this time, a gentleman by the name of John Linebaugh began pestering Seyfried with letters and phone calls touting the .45 Colt as a significant step up and over the legendary .44. The two finally met, and Linebaugh offered Seyfried the chance to shoot his .45 Colt over the chronograph. Ross declined, stepping back an adequete distance and taking cover, as he truly expected the revolver to come apart like a grenade in Linebaugh’s hands. But, the chrono’ told the true story — six times in a row, the 310-grain bullets traveling at 1,500 fps. Remarkable!

The biggest shock came when Seyfried, expecting to pound the surely mangled cartridge cases out of their chambers, was able to lift them out with minimal effort. Linebaugh was definitely on to something, and Seyfried immediately commissioned him to build one of these super .45 Colts. As for my love affair with the cartridge, what’s good enough for Ross Seyfried is certainly good enough for me.

One need not load the .45 Colt to Casull levels to enjoy a leg up in effectiveness. Loaded to much lower pressure levels, the .45 Colt will not leave you needing more.

In the early 1950s, while Elmer Keith was hot-rodding the .44 Special, Dick Casull turned his attention to the .45 Colt and building special five-shot cylinders on Colt Single Action Army revolvers. In those days, with limited gunpowder options, one had to get creative in order to achieve high velocities. Casull was able to get a full 2,000 fps out of a 230-grain (one designed for use in the .45 ACP round) bullet by loading two grains of Unique, 25 grains of H2400 and three grains of Bullseye. At the time, highly compacted triplex loads were the only path to achieving the pressures necessary to reach the velocities he sought.

Manufacturers of .454 Casull ammunition have remained true to the original design parameters, offering some very high-velocity loads. However, with modern powders, the .454 is loaded to lower levels than the SAAMI maximum spec, as they are able to achieve the desired velocities without touching the maximum pressure ceiling. The pressures are still high, relatively speaking, but lower than the max allotted levels. The Casull also shines with heavy-for-caliber bullets, though care must be taken when loading them at high velocities, for such recipes have a propensity for testing the integrity of the crimp.

In 1983, the Freedom Arms Model 83 was introduced in Dick Casull’s souped-up .45-caliber cartridge. Never before had such a high-pressure revolver round been produced nor a gun that could live under the abuse generated by it. Other manufacturers, such as Ruger and Taurus, followed suit years later with their own super-strong revolvers chambered in .454 Casull, as this round required a revolver of much stronger construction than any made for the .44 Magnum.

This was not only because of the higher pressures, but also because Dick Casull specified a longer case to prevent the accidental use of .454 Casull ammunition in .45 Colt revolvers of inadequate strength. Additionally, Casull specified a small rifle primer pocket to strengthen the head of the case by virtue of leaving more material in this area. I think of the .454 Casull as the .378 Weatherby of the revolver world, as neither is really pleasant to shoot when loaded to spec. The .454 Casull generates horrendous recoil and has caused its fair share of injuries. Most .454 Casull ammunition manufacturers load the cartridge short of its full velocity and pressure (SAAMI specification) potential. However, paper ballistics sell, and even loaded down a bit, the .454 can still boast potent numbers. There is no other commercially available handgun cartridge that has a maximum SAAMI pressure specification as high as the .454 Casull, though the .460 and .500 S&W Magnums come close.

At the end of the day, the .454 Casull is a very flexible cartridge, which was Dick Casull’s vision from inception. What he wanted and what was ultimately delivered was a cartridge and revolver combination that can be loaded from mild to extremely wild, as the shooter’s desires and needs dictate. I think Dick Casull succeeded impressively.

Smith & Wesson’s long-range wonder cartridge was introduced in 2005, housed in the company’s X-frame platform. Boasting a case length of a full 1.8 inches, the .460 is basically a stretched .454 Casull. This new cartridge was designed in the same vein as the .454 — high pressure, high velocity, long range. The .460 S&W Magnum has the distinction of being the highest-velocity production revolver cartridge in existence, with some factory loads able to exceed 2,300 fps.

With an overall cartridge length of 2.30 inches, the .460 XVR will also safely chamber and fire .454 Casull and .45 Colt ammo. However, I have not been able to extract acceptable accuracy shooting various loads of .45 Colt or .454 Casull through my test XVR. Not a terribly efficient round, the .460 excels with both light and heavy bullets, but it will not outshine the .454 Casull by much when mid-weight bullets are loaded. Similar pressures can be achieved, and, by increasing the payload, the results aren’t dramatic. That said, in most factory loads, the .460 pushes a lightweight bullet at high speeds, just as intended. In this iteration, it does well on thin-skinned game, but light, frangible bullets at high velocity are a recipe for disaster on truly large animals. Fortunately, the .460 is very effective loaded with heavy bullets as well.

The price you pay for choosing the .460 S&W Magnum is the size of the revolver necessary to hold the oversized cartridge. Then again, every decision you make comes with a price.

.45-70 Government
I know I’m going against the fabric of this by including a rifle round in the lineup. Having said that, this is another cartridge worth mentioning, as it is popular in the one production revolver produced in this old workhorse of a caliber. That revolver is Magnum Research’s BFR — Big Frame Revolver. This super-sized offering is big on size and power with surprisingly moderate recoil. 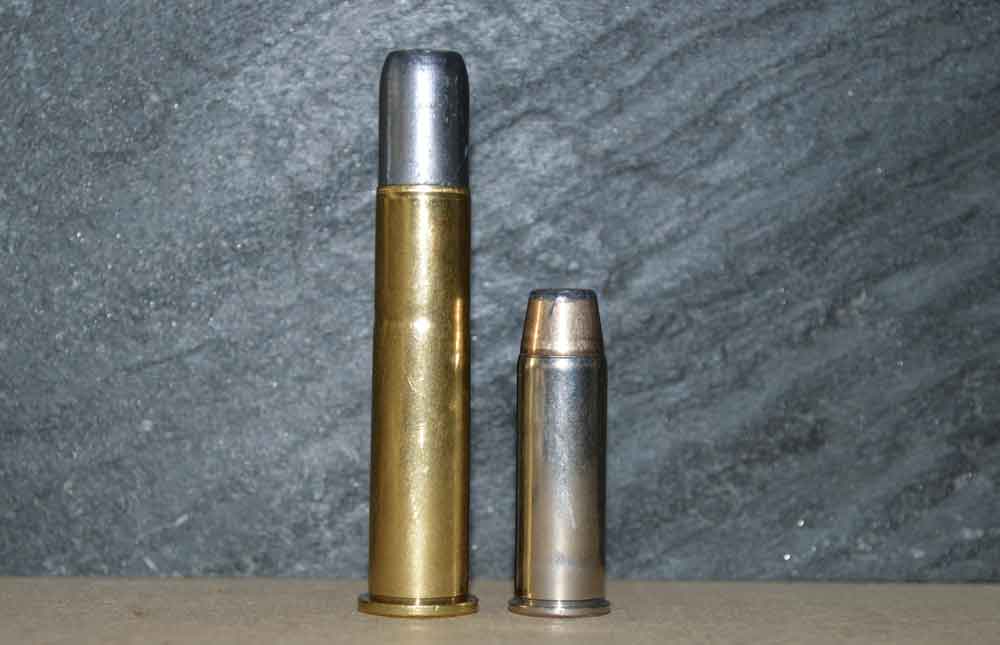 In its nomenclature, “.45” denoted the caliber and “70” the number of grains of black powder. This old warrior is still hanging around, more viable and youthful than ever. Introduced in 1873 at the U.S. Army’s Springfield Armory, the .45-70 in modern form is quite the performer, one able to mimic the .454 Casull in a handgun, but at much lower chamber pressures. We are talking about modern smokeless powder loads here, not the .45-70 in black-powder form. Granted, it takes a lot of revolver to house the big .45-70 round, but the bulk of the BFR serves to tame the cartridge quite a bit over a lighter revolver loaded to similar levels as the .454 Casull. The nominal bullet diameter is .458 inches, and the case length 2.10 inches.

I took delivery of a BFR in .45-70 with a 7.5-inch barrel. The long-framed revolver has surprisingly good balance, despite its exaggerated proportions. The trigger was good and broke cleanly at about 3.5 pounds. All BFRs have a free-wheeling pawl, and the fit and finish is very good.

This article is an excerpt from Gun Digest Book of Hunting Revolvers.