ROBAR Guns helps to revive and revitalize a standard surplus Browning Hi Power, and the result is a beautiful, functional pistol.

Some classic or historical firearms of value probably shouldn't be customized, but if you do want to go that route with a standard surplus Browning Hi Power, here are some options:

How many times has the following statement been made? “I wish this gun could talk. Think of the stories it could tell.” There’s a mystique about a well-used, old gun that spurs the imagination. Where was this gun during its service? Who carried it? Has it been fired in combat? Those are just some of the questions such a gun evokes.

While some wish to keep a vintage gun in its aged condition, others want more. So some firearms with a history, however obscure the history may be, are reworked to bring them back to even better condition than when they left the factory. Doing such work on a gun with a verifiable connection to a particular historical event or famous person is probably not a wise choice, but taking a run-of-the-mill old firearm, resurrecting it and turning it into a work of beauty is sometimes a worthwhile pursuit.

The Browning-designed Hi-Power, or High Power, was adopted as a military sidearm by Belgium in 1935. Originally built by Farbrique Nationale (FN) and eventually called the Grande Puissance (High Power), it was also manufactured in the U.S. by Browning Arms Company.

To avoid confusion with Browning’s High-Power rifle, Browning called its pistol the Hi Power. So technically, a gun made by FN is a High Power and one made by Browning Arms Company is a Hi Power. Because most readers are used to the name Hi Power, that will be used here.

In continuous production somewhere in the world since 1935, it has been adopted for use by military and police units around the globe. And as older Hi-Powers are replaced, they often find their way into the U.S. surplus market, like the one featured here that was purchased from AIM Surplus (AIMSurplus.com).

It is a Mark II version, and according to the serial number decoder found on the Browning website (Browning.com), it was originally built in Belgium by FN in 1985. AIM Surplus’ price was $430. Not bad for a functioning handgun made by FN. 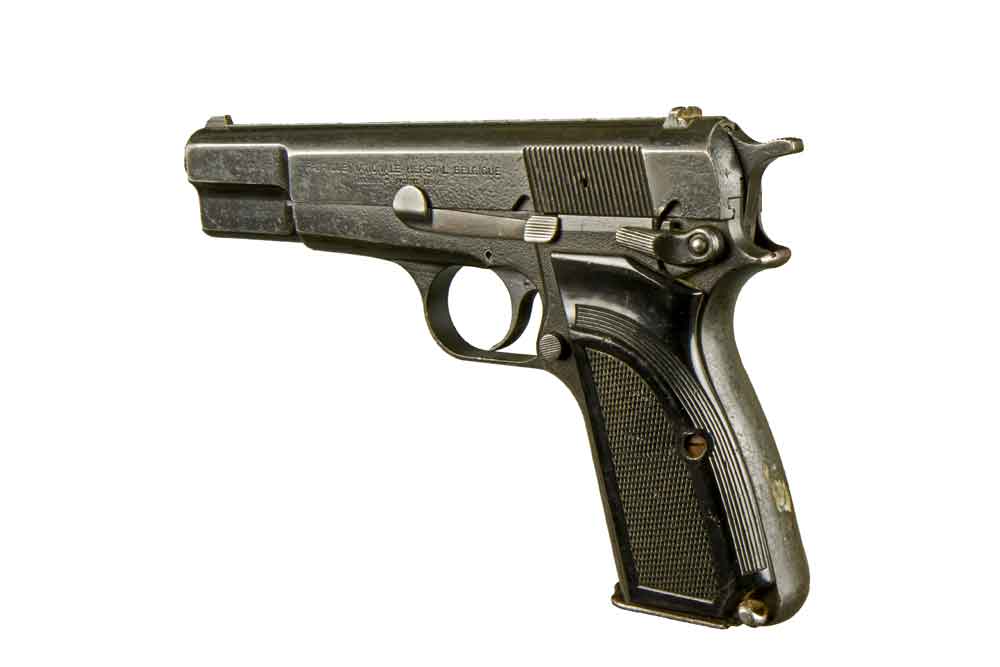 The Before
In full working condition when received, it had obviously led a rough life as evidenced by scratches and gouges on the surface. The trigger broke at about 6 pounds after a bit of creep, followed by some overtravel. It was not a really bad trigger, but the shooter needed to concentrate carefully on the press to obtain good results. Groups at 25 yards from a rest averaged from just less than 5 inches to a little more than 9 inches. The gun was reliable and adequate, with no malfunctions encountered in testing.

But the gun could be improved, so it was taken to ROBAR (ROBARGuns.com), a specialty gunsmithing company located in Phoenix, Ariz. Among other areas of expertise, ROBAR can take a well-used Hi Power and make it into a like-new gun that’s a better shooter than when it left the factory. ROBAR’s Hi Power specialist is gunsmith Jodi Gritus.

Despite the rough appearance of the gun when turned over to ROBAR, Gritus displayed no hesitation in taking on the task of turning the vintage Hi Power into a gun its owner would be proud to display and that could be used in confidence for self defense.

Upgrading A Classic
Sights on the Mk II Hi Power are less than optimal, so a set of three-dot LoMount Carry tritium night sights were obtained from Novak (NovakSights.com). These are superb sights that have become an industry standard but required ROBAR to cut dovetails into the slide in order to install them. To give the gun a truly custom look, other features were added. Hi Powers have a small beavertail, allowing the hammer spur to bite some shooters, so ROBAR extended the beavertail, shaping it to accommodate the custom Cylinder & Slide Type 2 hammer with its skeletonized spur. Despite welding additional metal to the frame and then shaping by hand, the frame appears to have left the factory with the extended beavertail.

Another unique custom feature is the lanyard ring. Lanyards served a valuable purpose years ago, and kept a dropped gun from disappearing. They lost favor for a period but have seen a comeback. Many original Hi Powers had a lanyard ring, and the ring on the surplus gun featured here was misshapen and of little value. But ROBAR designed a new one that fits sleekly into the heel of the gun.

ROBAR lightly stippled the frontstrap to provide a more secure gripping surface. Light stippling was chosen because heavy stippling can abrade the hand, especially during extended training sessions where the gun is drawn and holstered repeatedly.

Light stippling on the frontstrap provides just enough friction for a solid grip without drawing blood. Nicely checkered Cocobolo panels were installed and also improve the grip. And the beautiful grain compliments the gun’s two-tone finish.

ROBAR is well known for metal finishes; its sister company, Coating Technologies, Inc., specializes in that field and is located in the same building. Three finishes were applied to the Hi Power.

The frame was coated with OD Green Poly-T2, which is a modified epoxy coating that is embedded with polytetrafluoroethylene (PTFE) — commonly known by the trademarked name of Teflon. Available in different colors, Poly-T2 provides both lubricity and corrosion resistance, being able to withstand over 1,000 hours of salt spray.

The slide was finished with black Roguard, a tough molybdenum-disulfide based polymer finish that also provides lubricity and is corrosion resistant. It is very thin, about .0005 inch, so it does not significantly change the dimensions of gun parts. Like the Poly-T2, it has a lifetime warranty.

Internal parts and the magazine were finished with NP3, an electroless nickel finish, which is very hard, corrosion resistant and is embedded with small particles of PTFE to provide lubricity. NP3 is so slick that most residue from shooting wipes off with a soft cloth. Incidentally, NP3 is used on critical parts of the International Space Station. Even the outside of the new, match-grade Bar-Sto barrel was finished with NP3.

ROBAR also performed a trigger job, removed the bothersome magazine disconnector, polished and installed a new sear and installed a Cylinder & Slide trigger pull reduction spring kit. Those new parts and the NP3 finish resulted in a much better trigger pull. Although the pull weight is only a little less than the original, the creep has disappeared and the break is very crisp.

A Cylinder & Slide extended strong side safety replaced the old stock safety, making activation much easier and more positive. Dings and dents acquired over the years were removed, and the feed ramp and breach face were polished to improve feeding. The After
Range testing was done using two holsters available off-the-shelf from Comp-Tac (Comp-Tac.com) and Blade-Tech (Blade-Tech.com), into which the customized Hi-Power fit despite the installation of the larger Novak sights. The customized gun now displays much better handling characteristics, and accuracy off the bench has improved dramatically — from the previously mentioned 5 to 9 inches to about 3 to 4 inches.

The price for customization depends on the parts and features ordered, but retail for the test gun, including the cost of the original surplus gun, was just under $3,000. Sure, a new Hi Power will cost less, and not everyone can afford the custom touches, but for others, the end result is worth it. And the gun is impressive.

This article is an excerpt from the Summer 2017 issue of Gun Digest the Magazine.