The classic Smith & Wesson .357 Magnum is a stunning piece with an intriguing history, and it’s still a very popular item with collectors.

What makes the Smith & Wesson .357 Magnum so collectable?

When the .38 Special cartridge was introduced in 1902 it was a considerable improvement over the earlier black-powder .38s of the 1870s — the .38 Long Colt and .38 Smith & Wesson. The .38 Special was a well-balanced, all-around cartridge and quickly became popular with law enforcement and the military, as well as with civilian shooters. Before long it became the standard to which all other revolver cartridges were compared.

For much of the 20th century, any time you saw a revolver on a policeman’s belt, it was a probably a .38 Special. But there were exceptions. By the early 1930s, the automobile began to change life in the U.S. Unfortunately, among these changes was a surge in bank robberies, with the bad guys making their getaways in fast cars. Lawmen saw a need for a more powerful cartridge than the .38 Special, something that could penetrate the steel doors and bodies of an automobile. This was not to replace the .38 Special but to give an option to lawmen in various agencies.

One option was the .38 Super in Colt’s 1911 semi-auto pistol. For several reasons, however, many in law enforcement had not yet accepted this great cartridge/gun combination. This was a time when the semi-auto was still not fully trusted, and the same could be said about expanding bullets in automatics (though the FMJ .38 Super penetrated auto bodies very well). But in the 1930s, the revolver was still king.

For several years, gun writers Elmer Keith, Philip Sharpe and others had been experimenting with powerful .38 Special handloads. Their results encouraged the engineers at Winchester’s ammunition division to take on the project, and by 1934, the .357 Magnum was born. By adding about a tenth of an inch to the case length of the .38 Special, velocity almost doubled to 1,515 feet per second for a 158-grain bullet out of an 8.375-inch barrel. The first handgun cartridge worthy of the name Magnum was a reality. It was an immediate success.

The cartridge and the Smith & Wesson revolver were both introduced in 1935, with the handgun given the same name as the cartridge. Essentially a custom-made, hand-fitted gun, it could be ordered with virtually any barrel length from 3½ to 8¾ inches. Standard features included adjustable rear and post front sights, blue or nickel finish and a checkered rib atop the barrel. Six different rear sights were available, and an interchangeable front sight blade was included for use with .38 Special ammunition.

Many of the first .357 Magnum models were registered in the name of the original owner and came with a certificate listing the serial number and any custom features. According to Standard Catalog of Smith & Wesson, 4th Edition (Gun Digest Books, 2016) by Jim Supica and Richard Nahas, it is believed that about 5,224 Registered .357 Magnums were made between 1935 and 1939, and 1,142 Non-Registered models were made between 1938 and 1941.

S&W .357 Magnum Gun Values
The Registered .357 Magnum models are the most collectible of all Smith & Wesson revolvers today, and there is nothing to indicate that this is likely to change in the near future. Non-Registered .357 Magnums are also very much sought after by collectors, in part because fewer of them were made. Estimated values for Registered models in Very Good to Excellent condition with registration certificate and original box range from $7,500 to $10,000, and for Non-Registered guns from $4,500 to $7,500. New-In-Box models can demand $18,000 to $20,000. Of course, special models and celebrity-owned examples can go for much more. Elmer Keith’s personal prototype, for example, brought $28,750 at a James D. Julia Auction in 2015. 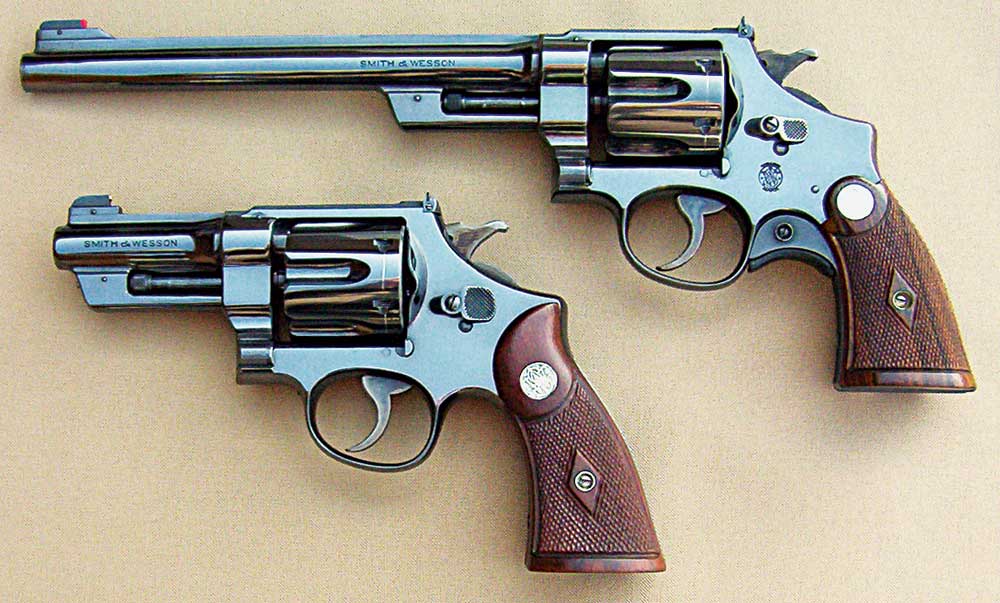 Most students of Smith & Wesson know that serial number 1 was presented to J. Edgar Hoover, the first Director of the F.B.I. This was in April of 1935. Currently, the location of this gun is a mystery, but in collector’s circles it is believed to still exist. What’s its value? One can only guess.

Among the rare features that can significantly increase the value of a .357 Magnum model is a nickel finish. It is believed that no more than 150 to 175 nickel guns were made. Some value estimates say these guns are worth double what blued models would bring. Special grips can also make a big difference. Less than 50 .357 Magnum revolvers are believed to have been shipped with factory ivory, pearl or stag grips. Factory engraved models are very rare; less than a dozen were made.

Keep in mind that before buying or selling any of the models mentioned here it is very important to obtain a letter of authentication detailing the features of the gun in question and when and to whom it was shipped. For more information, contact Smith-WessonForum.com, where you can download a form to use for the letter. Cost for this service currently is $75, which is money well spent.

The serial number range for the pre-war .357 Magnum revolvers started at 45756 and ended with 62489 in 1941 when the U.S. entered World War II. This range of numbers also includes those for other N-frame models. After the war, production resumed in 1946 with an “S” prefix added to the serial number at S71801. These early transitional post-war models of the .357 Magnum are quite collectible, especially those with longer barrel lengths.

Smith & Wesson made a few changes to the .357 Magnum in 1950, including the new short-throw hammer design. In 1957, the company went to a numbering system for each handgun, and the .357 Magnum became the Model 27. The name had changed, but it was still a beautiful example of the gunmaker’s art. When I was a young lad, I remember a photograph of a Smith & Wesson .357 Magnum with a 3½-inch barrel in my early '50s edition of Shooter’s Bible. I would frequently pick up the book and turn to the S&W section to look at the photo again and again. That was a gun!

Editor's Note: This “Collector's Corner” column is an excerpt from the June 2017 issue of Gun Digest the Magazine.