Are .357 Magnum snubnose revolvers still a good choice for those who carry? There's no sign that big-bore snubnose revolvers like the .357 Magnum are going away any time soon, especially with manufacturers continuing to introduce new models. Really? We use smartphones today, not rotary dial phones. Aren’t snubnose revolvers today’s equivalent of rotary dial phones? In an age of polymer striker-fired semi-automatic pistols with double-stack magazines that you can get in nearly any color you want, it seems an odd phenomenon that revolvers still exist.

Why are so many snubnose revolvers still being manufactured? With all the compact semi-automatic pistols available, it seems that revolvers would be almost irrelevant — lethal paperweights, a dust-collecting wall hanger. But manufacturers like Charter Arms, Smith & Wesson, Ruger and Taurus keep churning them out, and we still keep buying them. Even Kimber, an innovator in semi-automatic pistol platforms, recently introduced the K6s revolver. Ruger’s LCR platform now includes the LCRx revolver in .357 Magnum.

Meanwhile, Smith & Wesson, Taurus and Charter Arms have been tweaking their snubnose models in an assortment of calibers, but mostly in .38 Special and .357 Magnum. S&W also introduced a new Model 360 J-Frame revolver to its line, and Colt even got back in the snubnose game with a new Cobra made for the 21st century.

So, what gives? The simple answer is manufacturers are supplying demand for these hand cannons. Revolvers are dated, but they are a proven platform with lots of virtues. These include their ease of use, their inherent safety, their self-contained design which doesn’t leave a mess behind, and — probably the most important virtue in some models — their use of the potent .357 Magnum cartridge. Those virtues create a bottom-line advantage, which is simplicity. Just load, point and shoot. There’s no slide to rack, no magazine to load, no safety or de-cocking levers like with a semi-automatic pistol. Just load the cylinder, snap it back in place, and it’s good to go. The design is self-contained in the fact that there’s no magazine to insert or lose in tall grass, snow or sand. Because you need to manually unload a revolver, there's no mess or empty cases rolling around to leave behind unless you want to; this is particularly advantageous to those who choose to reload.

A revolver is also often the perfect firearm for new shooters, with fewer moving parts, easier loading and no need to pull back a slide. Snubnose revolvers are small and easy to place in alternate positions such as ankle holsters, and they are often chosen as a reliable and powerful back-up gun for defensive work.

Revolvers offer functional advantages over semi-automatics, too. They don't require a strong grip to ensure reliable function; they function reliably when in contact with clothing, which can restrain a semi-automatic pistol’s slide from cycling properly and fully returning to battery. Clearing an ammunition-induced stoppage with a revolver is as simple as pressing the trigger again. Tweaking The Snubnose Magnum Design
From Kimber’s and Ruger’s perspectives, this old technology needed a fresh set of eyes. Their new revolver redesigns offer key features today’s firearms owners and concealed carry holders are looking for — reduced weight, better ergonomics and a smoother and consistent trigger with no stacking. There's no doubt that the K6s and LCRx allow a shooter to be more effective than with conventional snubnose revolvers. The designs also help in managing recoil, which is especially relevant with the .357 Magnum. The LCRx, for instance, allows a user to grasp the revolver higher so the trigger is easier to press and there's less muzzle flip.

The .357 Magnum round is not new either. When the .357 Magnum cartridge debuted, it was nothing less than awe inspiring. It’s been around since 1935, and it quickly became one of the most popular revolver cartridges for hunting, target and police work prior to LE transitioning to semi-automatic pistols. The .357 Magnum has a lot of history and street experience. Many law enforcement agencies issued .357 Magnum revolvers because the round provided better penetration than the .38 Special.

When hollow-point bullets became more popular, the .357 Magnum helped prove the concept of a small entry hole with expansion that doubles the diameter size of the projectile. In a snubnose revolver, the cartridge brings excellent firepower with nearly double the penetration and more velocity than a 9mm load with comparable bullet weight. The sweet spots for the .357 Magnum are 125- and 158-grain bullet weights. I can hear what you're thinking: I can carry and get more bullets downrange with a 9mm with less recoil and better shot recovery. Yes, those are valid points. Read the FBI data closely and you’ll find that in most officer-offender shootings — similar to what a CC holder will encounter — there are typically two to three rounds fired at a distance of 5 feet. At 5 feet, the .357 Magnum round is formidable even though the round is plenty lethal out to ranges that tax the abilities of a snubnose revolver. With fixed sights and a short barrel, the snubnose is a close-range weapon, which makes it a perfect candidate for concealed carry holders.

For fast reloads, I carry a Quickstrip from Tuff Products. It’s a flexible strip of rubber that holds five cartridges. I’ve found that if I load two at a time, the process is quick. The weight of the Quickstrip is the same as five cartridges, and there’s no bulk. It’s not as fast as loading a pistol with a magazine, but comes in just a few seconds behind. They also come in eight-round strips. I keep one Quickstrip loaded with shot cartridges for snakes.

Shooting a snubnose chambered in .357 Magnum is an experience. Stout is a polite way to refer to the recoil. I’m embarrassed to write the expletive phrases that spewed from my mouth the first time I fired .357 Magnum loads through a lightweight snubnose. I’ll paraphrase: Ouch.

These are not revolvers you want a novice shooter to begin with. These are hand cannons … but I truly believe that if I need to fire one of these lightweight cannons during a violent encounter, I will have no recollection of the recoil. Adrenaline will do that to you. The Ruger LCRx weighs 17 ounces unloaded. Do you remember inertia from high school physics? Right. All that energy from the fired .357 Magnum round needs to go somewhere, and the Hogue Tamer does a good job of helping you hang onto the revolver. With lighter .38 Special loads, the recoil is tolerable. 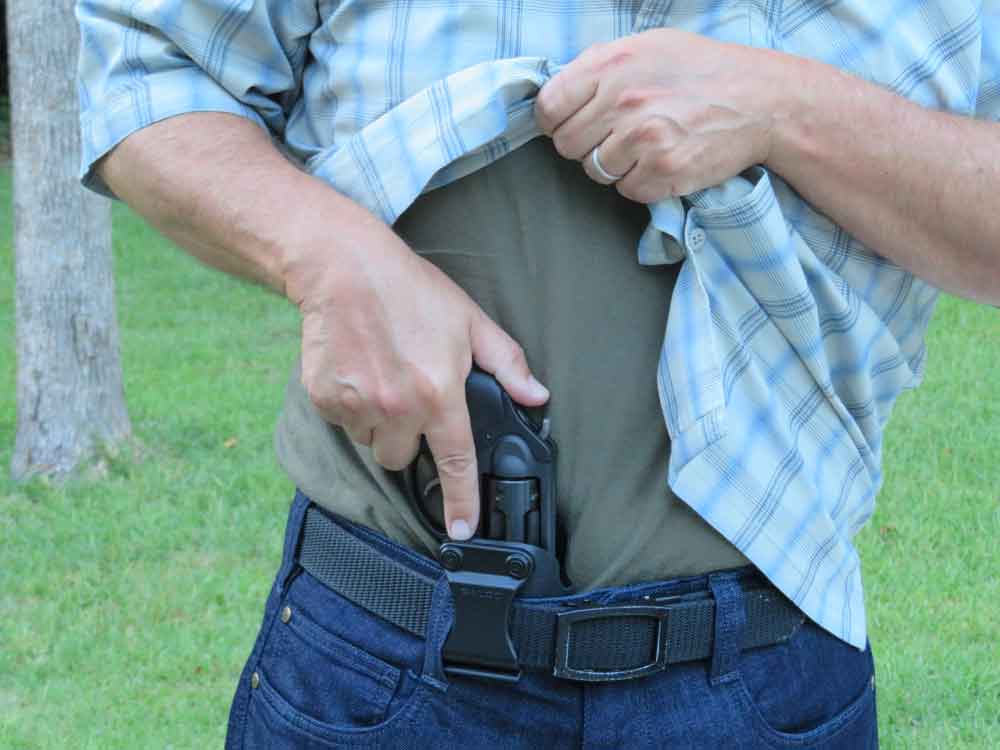 Snubby Revolvers To Bet On
My S&W J-frame Model 649 is a full-metal revolver with a 2.125-inch barrel. Slightly larger and heavier than the LCRx, it manages recoil better. Both have exceptionally smooth triggers in double action and the ability to cock the revolver to fire it single action. They also slip into a coat or pants pocket. I’ve been carrying the LCRx in a Galco Triton Kydex IWB holster. In appendix or behind the hip, I like this setup because it is lightweight and I can slide it on or off quickly. I’ve been wearing 5.11 Defender-Flex jeans because the fabric offers a little stretch, making IWB carry more comfortable.

One of my favorite .357 Magnum snubbies is the S&W Model 327. The Model 327 is made with a scandium N-frame, steel barrel sleeve and a titanium cylinder and barrel shroud. This is a very lightweight revolver at only 24.7 ounces loaded. It holds 8 rounds. That’s a round capacity similar to many single-stack 9mm pistols.

S&W’s 686 and 627 models offer 7- and 8-round capacities, respectively. These are heavier and larger, but that liability is also an asset since they are easier to shoot. Although a concealable N-frame is almost an oxymoron, with the correct holster — I use a Galco Combat Master holster — the 327 is easy on the hip. The holster’s open-top design allows fast access to the revolver. Because it's a belt holster, I wear an unbuttoned shirt or a coat to conceal it.

Since I’ve moved south of the Mason-Dixon Line, there are plenty of snakes that have wanted to make my acquaintance. Although the .357 Magnum is a formidable round, it's also versatile because you can fire .38 Special cartridges in a .357 Magnum revolver. A revolver loaded with CCI shot cartridges helps keep the viper relations on good terms and at distances of 10 feet. I would much rather train and practice with .38 Special loads in these small snubnose revolvers. 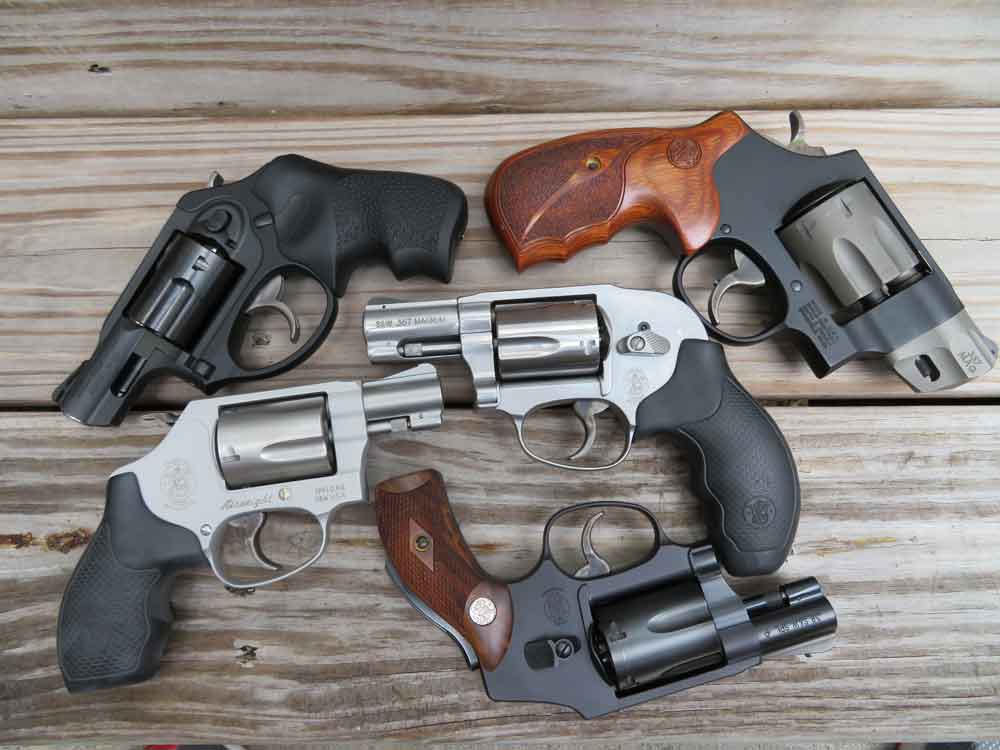 The LCRx and S&W 649 are both lightweight, so it’s very comfortable to conceal carry either of them. The Model 327 takes slightly more effort. I’ve also encountered my first black bear down here, and the Model 327 is what I wear when hiking in the woods. Nature or manmade deadly encounters are easily met with a .357 Magnum. Sure, the smaller models only hold five shots, but stoked with .357 Magnum cartridges, they still make the 9mm look anemic. I still carry my 9mm often, but my stable of .357 Magnum snubbies are routinely rotated into my daily carry, depending on my activity.

It might seem odd that snubnose revolvers are still alive and kicking — especially in .357 Magnum — but once you shoot one and carry it, you understand the understated simplicity of the revolver platform. In my opinion, there’s no compromise carrying a .357 Magnum snubnose.

Go to any gun shop and you’ll find a massive assortment of semi-automatic pistols — full size to subcompact, and micro and in calibers that range from .380 ACP and 9mm to .45 ACP. Then you will see them. The snubnose revolvers will be tucked away, not given a lot of display space, as if they’re almost an afterthought. Really? I say the .357 Magnum snubnose revolver is going through a renaissance. Reports of their death have been greatly exaggerated.
Editor's Note: This article is an excerpt from the Fall 2017 issue of Gun Digest the Magazine.