John M. Browning’s last design before his passing, the Browning Superposed, is a fine over/under shotgun that holds a good deal of collector value.

What makes the Browning Superposed a collectible item?

That amazing genius John M. Browning gave us many of America’s most revered firearms: several Winchester lever guns, Colt pistols like the 1911 and the first successful semi-auto shotgun, the Auto-5. Around 1920, he started making plans to design something not available to American shooters: a high-quality, affordable over/under shotgun, which was his last design and final legacy to the gun world. 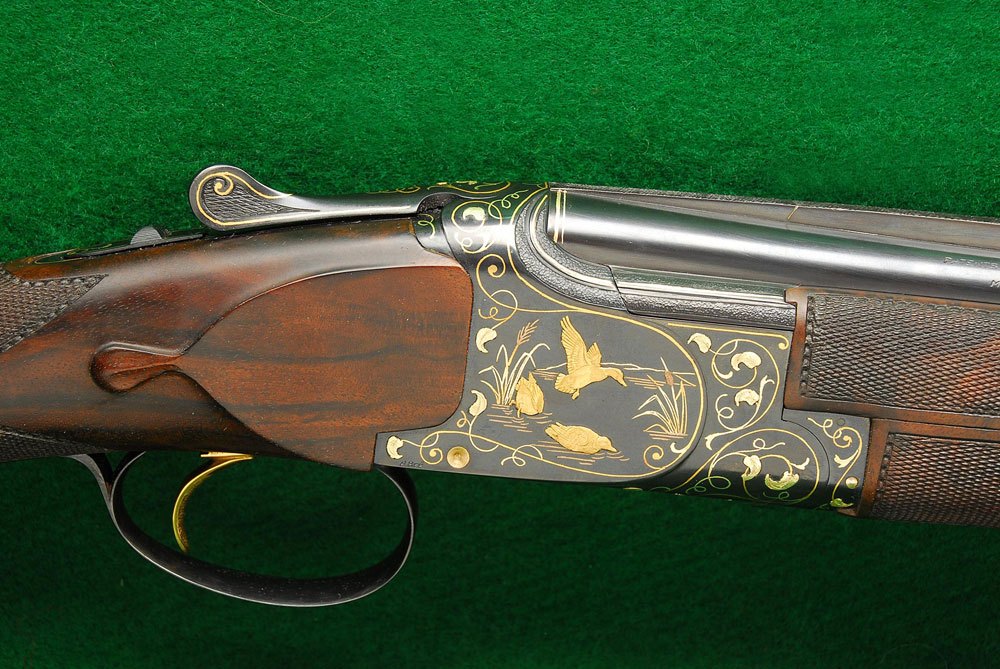 The side-by-side shotgun was still very popular at the time, but the over/under had never developed a large following in the U.S. Browning liked the over/under’s single sighting plane and was convinced American shooters would too, as the country was often called “a nation of riflemen.” The over/under was popular in Europe, where guns were custom made and expensive.

Browning wasn’t just a great designer, but also a smart businessman. For this shotgun to be a success, he knew it needed the best workmanship possible for high-quantity production. His goal was a price under $150, much less than handmade European guns but still a lot at a time when prices for many classic American side-by-sides were less than $50.

In the early ‘20s, Browning started on his Superposed shotgun. He was familiar with the various European designs and wanted to make improvements. It was a slow process, and it was 1926 before his design was finished and a patent applied for and granted.

Browning had a long relationship with FN in Belgium. It had manufactured several of his designs, and had agreed to produce the Superposed. In late 1926, he traveled to Liege with his son Val to work on the final details of his design, but he never lived to see it produced. On November 26, 1926, Browning died of an apparent heart attack in his office at FN.

There was still work to do before production of the Superposed could start, and Val Browning overtook the project. There were problems with several key features that needed to be addressed, including the trigger system, the selective automatic ejectors and the fit and finish quality. Another was the unique fore-end system by which the barrels could be removed from the action without detaching the fore-end. These issues were resolved, and in 1931, the gun went into production. It was offered in four grades: standard or Grade 1, Pigeon, Diana and Midas, each with higher levels of engraving and grades of wood. The Grade 1 base price was $107.50, with the higher grades ranging from $175 to $374.

The Grade 1 model had double triggers. For $137.50, the buyer had a choice of a single trigger (selective or non-selective) or a new design by Val Browning called the Twin-Single trigger. This system had two triggers, each of which essentially a non-selective trigger firing one barrel with the first pull and the other with the second. The front trigger fired the lower barrel first, and the rear fired the top barrel first.

The Twin-Single was clever and offered shooters a quick choice of chokes, depending on the distance and direction of a target. However, it was not a popular option with many shooters and was phased out when a new single-selective trigger was developed, again by Val Browning.

Another variation came along in 1936 with the Lightning Superposed. It weighed around 6.75 pounds, compared to 7.5 pounds for the 12-gauge.

The Superposed’s timing was not great. The Depression was well underway in 1931, and to remain competitive, in 1934, the base price was reduced to $99.50, and the next year to $69.75. The pre-war price stabilized at $79.80 until Germany invaded Belgium and took over the FN factory.

After World War II, FN returned to the manufacture of Browning sporting arms, first with the Auto-5 in 1946 and then the Superposed in 1948. The 12-gauge over/under was basically the same as the pre-war version but available only in Grade 1. It was priced much higher, at $241. Then, in 1949, the 20-gauge was introduced with a slimmer frame and a lighter weight of about 6.5 pounds. The ‘50s saw an expansion of Superposed variations, including magnum, trap and skeet models. Some collectors consider the 1950s to be the period of the best quality for the Superposed.

In 1959, fans of the smaller gauges were thrilled when the .410 bore and 28-gauge models were introduced. For some reason, other than one prototype, no Superposed was ever chambered for the 16 gauge.

Prices for Browning firearms saw big increases in the 60s, mostly due to labor problems in Belgium. By 1969, the Superposed Grade 1’s base price started at $435. To hold prices down, Browning made changes, mostly cosmetic. These included things like reducing the length of the trigger guard tang and the shape of the grip in 1966. Collector interest today is affected by these changes, with slightly higher values given for the “long tang, round knob” models.

In the '70s, inflation was a problem in much of the world, including Belgium. The Grade I price reached $1,100 by 1976. Browning had unveiled the made-in-Japan Citori in 1973, a well-made production gun priced at less than $400. The writing was on the wall. Browning executives realized that for the Superposed to continue at the same level of quality, it would need to become a presentation grade, limited production item. In 1977, four grades were introduced, Presentation Models P1 to P4, with increasing levels of engraving, gold inlays and wood quality. Prices ran from $3,000 to $6,000. The P-series Superposed remained in production until 1985. From the mid-80s until today, the Browning Custom Shop in Belgium has continued to build numerous variations of John Browning’s favorite creation.

Editor's Note: This “Collector's Corner” column is an excerpt from the July 2017 issue of Gun Digest the Magazine.