From steel to Bakelite to polymer, surplus to new production, these are the AK magazines to avoid and the ones to seek out.

A gun is only as reliable as its best magazine. The action can run flawlessly, but if the next round to be fed is not where it needs to be, the gun will fail to cycle. Half of the AK’s famous reliability can be attributed to their magazines. Originally constructed from steel, their curve was perfectly engineered to accommodate 7.62×39’s significant taper, and the staggered-feed design makes them as easy to load as they are reliable. Not all AK magazines are created equal, however, and there are several things you should know before shopping for them.

Like AK rifles themselves, there are far too many variations and exceptions to cover every AK mag ever built. In this guide, we will highlight the most common 30-round 7.62 AK mags that can be found in the United States. 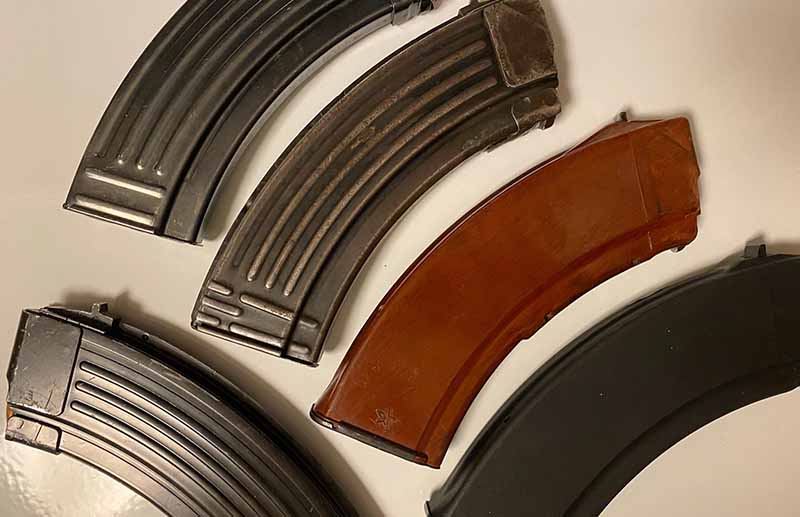 For those who plan on relying on their AK in an SHTF scenario, you should have as many magazines as you can realistically afford and store. In serious situations magazines are disposable, so they should be thought of as such when planning out your kit. Because of this, price plays a big factor for most when selecting magazines. Many seek out the cheapest mags available so they can purchase as many of them as possible. Unfortunately for them, the cheapest AK magazines have problems with reliability and fragility, meaning that they should only be used for plinking at the range or avoided entirely.

There are good AK mags that are too expensive to hoard as well, but they mostly fall under the collectible category in the U.S.

What all this means is that there is really only one kind of AK mag worth considering for most people due to its balance between price and quality, but thankfully these are also some of the most common to find. Stamped steel, ribbed, military surplus AK mags were made by just about every country that made AKs. They are so abundant that despite everything else happening in our country at the moment, they can still be regularly found online for about $20 to $30 depending on the condition and country of origin.

The most common surplus steel AK mags you will find are from Romania, Poland, Yugoslavia, Hungary, and Bulgaria. Some slightly rarer variants are Russian, Chinese, East German, and Egyptian. All these types are essentially of the same quality, which is good because they can be hard to distinguish at times. Many do not have roll marks visible, meaning one must resort to things like finish type and weld mark details to determine their origin. The only outliers here are the Yugo mags which feature a bolt hold open follower.

When shopping for surplus steel AK mags, there are a few things to look for. After determining that the magazine is indeed surplus and not new production, the magazine’s condition should be inspected. First, look for any visible dents in the body of the mag or bends on the feed lips. These mags are built like tanks, so it may actually require a tank running over one to dent it, but it's still something to check for. If there are no dents or only minor ones, move on to checking if the follower can move freely. I like to do this by taking a large screwdriver and depressing the follower with it. If you can press the follower all the way to the bottom of the magazine, release it, then see the follower return to the top without getting stuck, it should be good to go. If the magazine is very sticky and smelly, however, it has been packed in Cosmoline which will likely impede this test. The upshot of this is that Cosmoline-packed mags are usually very well preserved and function flawlessly after all the goop has been cleaned off. Cosmoline helps prevent rusting, so if the surplus mag you are inspecting is dry, check for rust as well. A small amount of surface rust can be cleaned without issue, but significant amounts can affect their function and structural integrity.

If you ever plan on using your AK for survival, these classic surplus steel mags will serve you well. A proper fighting rifle setup should have at least one of these in the rifle and four to five spares somewhere on your person.

If you can only afford a few good surplus steel ones, the AK mags in this category are the next best option. These cost less than functional surplus mags and are of almost the same quality.

There are new-production steel magazines that are available from both Bulgaria and South Korea. The Bulgarian ones are the better of the two, but the use of thinner gauge steel and different construction techniques make them not quite as robust as their surplus military counterparts.

There is one polymer mag that falls in this category, but something in common between all the magazines recommended here is the presence of a steel locking lug. Magazines with plastic rear locking lugs have been known to shear off during heavy use if too much force is exerted on them. Only magazines with steel lugs should be fully trusted to withstand serious abuse.

Keeping that in mind, the new-production polymer Bulgarian mags with steel locking lugs are also decent options that are priced below surplus steel. These also have an advantage of being lighter, but are obviously less durable as well.

AK Mags For Range Use Only

These are the cheap plastic magazines that have no steel parts to speak of. The rear lug cannot be trusted for serious use, and they have been known to get chewed up and deformed after repeated insertions. Many of these are also thicker than the steel mags the AK was originally designed around, resulting in them being difficult to lock into some models. The omission of steel also makes these mags cheaper of course, making them the most common variety to be included with new AK purchases today.

Whether it’s an American Tapco, a Polish WBP, or a Bulgarian ISD, if it doesn’t have a steel reinforced lug it should be relegated to your range bag.

These are the only common AK mags to outright avoid, and it's because of fitment issues. The magazines that fall into this category have been known to be made out of spec, meaning that modifications must be performed to either the mag or the rifle in order to mate the two. This simply isn’t worth doing with so many in-spec options available.

The AK magazines that are most commonly found to be out of spec are steel mags from either Croatia or from American manufacturers like ProMag.

Most AK mags in this category are also of excellent quality, with the only thing keeping them out of the “SHTF” category being their rarity and resultant price.

The best of these to keep an eye out for are the iconic “Bakelite” mags that are not actually made from Bakelite, but from another type of early plastic. The 7.62×39 variety of these were first developed in Russia in the late 1960s and are known for their distinctive colors and patterns that are reminiscent of wood. There are also Chinese-made variants that are even rarer than the original Russians. Russian Bakelite mags have been selling recently in the U.S. for about $100 each, something driven completely by false scarcity. It is true that these magazines are rare in America, but in Russia where they made millions of them, they sell for about $8 USD.

Some other honorable mentions to keep an eye out for are original Russian slab-sides, Russian aluminum waffles, Bosnian “fleur des lis” mags, and steel North Koreans.

The world of AK magazines can be confusing, so hopefully, this helped to provide some context. For the average American AK-shooter, the takeaway from all this is that the best mags to shop for are European military surplus, made of steel, in functional condition, and fairly priced. Check back for future guides on AK drum magazines and mags for other popular AK calibers.

Check Out These 7.62 AK Pistol And Rifle Imports