Massad Ayoob confesses that the SIG P220 is his very favorite SIG pistol, and indeed, one of his all-time favorite handguns. Extraordinarily accurate, very reliable, and easy to handle and shoot, one of the P220’s cardinal attributes is the cartridge for which it is chambered: the .45 ACP. 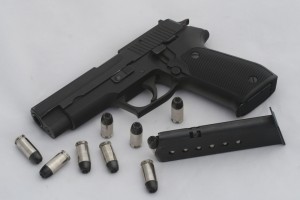 The P220 always fit most hands well. It always had good sights compared to most of its competition. And, of course, there was the reliability factor. The gun was and is extremely reliable.

But the gun had other advantages, too. High among these was the double-action first shot mechanism. Police chiefs had been leery about carrying cocked and locked guns.

The long, heavy double-action pull required to initially unleash the firepower of the P220 was much like that of the revolvers that were so much a part of their institutional history. Cops in general and police chiefs in particular were and still are much more comfortable with a double-action like the 220.

Most 1911 pistols of the period were not “throated” by their manufacturers to feed wide-mouth hollow-point bullets, the choice of most police and gun-wise private citizens. Engineered with a nearly straight-line feed, the P220 was reliable with almost every hollow-point bullet.

There was also the accuracy factor. The SIG-Sauer pistols are famous for accuracy across the board, but the P220 may be the most accurate of them all. I have twice put five rounds from a P220 into one inch at 25 yards. Both times, the ammunition was Federal 185-grain JHP, which the manufacturer used to mark on the box as “Match Hollow Point.” It was certainly truth in advertising. One of those guns was a well-worn P220 European, the other, a brand new P220 American. I later hit the 1-inch mark at 25 yards with a 5-inch SAO P220 and inexpensive MagTech 230 grain FMJ.

Almost every credentialed tester has noted the P220’s extraordinary accuracy. In his book The 100 Greatest Combat Pistols, defensive firearms expert Timothy J. Mullin had this to say about the P220. “All SIG pistols and products are fine weapons, but this one is particularly impressive.

My groups were so remarkable that I tested again at 25 and at 50 yards – and the results were just as superb. I placed five shots into a little more than 2 inches, and I pulled one of those shots. Four shots went into roughly 1-1/4 inches.” (1) A fan of SIG’s compact single-stack 9mm, Mullin added, “Although the P220 is not as good as a P225, I would rate it the top weapon that I tested in .45 ACP.” (Mullin’s emphasis.)

My friend Chuck Taylor is one of the leading authorities on combat handguns and the author of a great many articles and multiple books on the topic. When he wrote the fourth edition of The Gun Digest Book of Combat Handgunnery he had the following to say about the P220 .45. “First appearing almost two decades ago as the Browning BDA, the P220 in its current American version is regarded by many as being the state-of-the-art .45 auto. Indeed, its popularity is exceeded only by that of the Colt M1911 Government Model, whose king-of-the-hill status the P220 is now seriously challenging, especially in law enforcement circles.” Chuck continued, “The P220 is a simple design, perhaps as simple as a handgun can be and still work.

Its human engineering is excellent because, like its baby 9mm brothers, the P225 and P226, its controls are placed where they can be readily operated, something exceptional for a DA auto. Furthermore, its mechanical performance leaves nothing to be desired. It is probably the best DA self-loader around…In summary, the P220 is an excellent example of how good a DA auto can be. As such, it is well worth its not-inconsequential price and clearly a handgun upon which one could with confidence bet his life.”

Many double-action semiautomatics had a DA trigger pull that was heavy, rough, or downright lousy. The SIG’s double action pull was excellent, probably “best of breed.” It was the standard by which the competition was judged.

Once the first shot had been fired, it went to single-action, where the trigger press was a clean, easy 4 to 6pounds or so. The distance the trigger had to move forward to re-set the sear was just enough to give a buffer against unintentional discharges under stress, but not so great that it appreciably slowed down the shooter’s rate of fire.

With a 4.41-inch barrel, the SIG was a little longer in that dimension than the 4.25-inch Colt Commander, but more than half an inch shorter than the 5-inch Government Model. The Commander, originally introduced in lightweight format in 1949, weighed 26.5 ounces unloaded and held the same number of .45, .38 Super, or 9mm rounds as the P220. Later offered as the steel-framed Combat Commander, the Colt put on an additional 10 ounces in that format. The lightweight Commander was dubbed by one of its greatest advocates, Col. Jeff Cooper, as “a gun designed to be carried much and shot seldom.” Most who had fired it considered it much more unpleasant to shoot than its big brother, the full-sized, all-steel Government Model.

Thus it was that the cops and the shooting public were delighted to discover that the SIG P220, which like the lightweight Commander had an aluminum frame, wasn’t anywhere near as difficult to shoot as the alloy-framed Colt.

A major reason for the perception of the Commander’s vicious recoil was that, until the 1990s, its manufacturer furnished it with a short, stubby-tanged grip safety that bit painfully into the web of the hand whenever the gun was fired.

By contrast, the P220 was much rounder and more friendly to the hand. Nothing bit the shooter. In the P220, the low-pressure .45 cartridge simply drives the slide back with a gentle bump. Even though the slide of a 1911 pistol sits lower to the hand and should jump less since it has more leverage, anything that causes pain to the hand will magnify the shooter’s sense of recoil, and increase his likelihood of flinching and blowing each shot.

The P220 weighs a tad less than a lightweight Commander, 25.7 ounces unloaded. Yet most officers found it at least as pleasant to shoot as the full size 1911A1 in the all-steel configuration, which weighed some 39.5 ounces.

Only when a custom gunsmith (or, beginning in the 1990s, the manufacturers) put a beavertail grip safety on the lightweight 1911 did it become as comfortable to shoot as a P220, and allow the shooter to take advantage of the reduced muzzle jump potential afforded by its lower bore axis. However, none of this changes the other SIG attributes that made the P220 a favorite. A lightweight service pistol is especially important in law enforcement. The duty belt carries a great deal of equipment. The author has seen duty belts weighing in the 15- to 20-pound range once festooned with multiple handcuffs, a full-sized baton, heavy flashlight, portable radio, and ammunition.

The pistol is a significant part of the load, and any reduction in weight is appreciated. The weight of the duty belt is one reason why back problems in general and lower back problems in particular seem to be an occupational hazard of the street cop.

The pistol in its uniform holster rides near the edge of the hip, and on some individuals with some uniform designs, can directly contact the ileac crest of the hip. The potential for fatigue and discomfort is obvious.

Reducing the weight of the duty .45 from 39.5 ounces to 25.7 (the same round-count of the same ammunition adds the same weight to either) results in a 13.8-ounce weight saving – almost a pound – at a critical point.

Now, let’s look at plainclothes wear, whether in a detective assignment or off duty. The dress type belt, even a dress gunbelt, does not support the weight of the holstered gun as efficiently as the big, 2-1/4-inch-wide Sam Browne style uniform belt. A heavy gun becomes all the more noticeable. For generations, officers carried little 2-inch .38 caliber revolvers as off-duty guns, simply for their light weight and convenience. Now, the P220 .45 gives the plainclothes officer a much more attractive option. While not so small overall as a snubby .38, it is very flat. It fires the much more powerful .45 ACP cartridge, but despite its greater power it kicks less and is more pleasant to shoot than most snubbies.

It is about the same weight as the six-shot Smith & Wesson Model 10 or Model 64 Military & Police revolver with a 2-inch barrel. And, of course, it is much faster to reload, and its flat magazines are much more discreet and comfortable to carry than speedloaders for a revolver when concealment is the order of the day.

With an inside-the-waistband holster and proper clothing, the P220 virtually disappears into concealment. With a well-designed scabbard riding on the outside of the belt, it is almost as easy to hide. The fact that a single pistol with which the officer is intensively trained could be used on or off duty, in uniform or in plainclothes, is another big factor in the P220’s favor when police departments look at purchasing new sidearms.