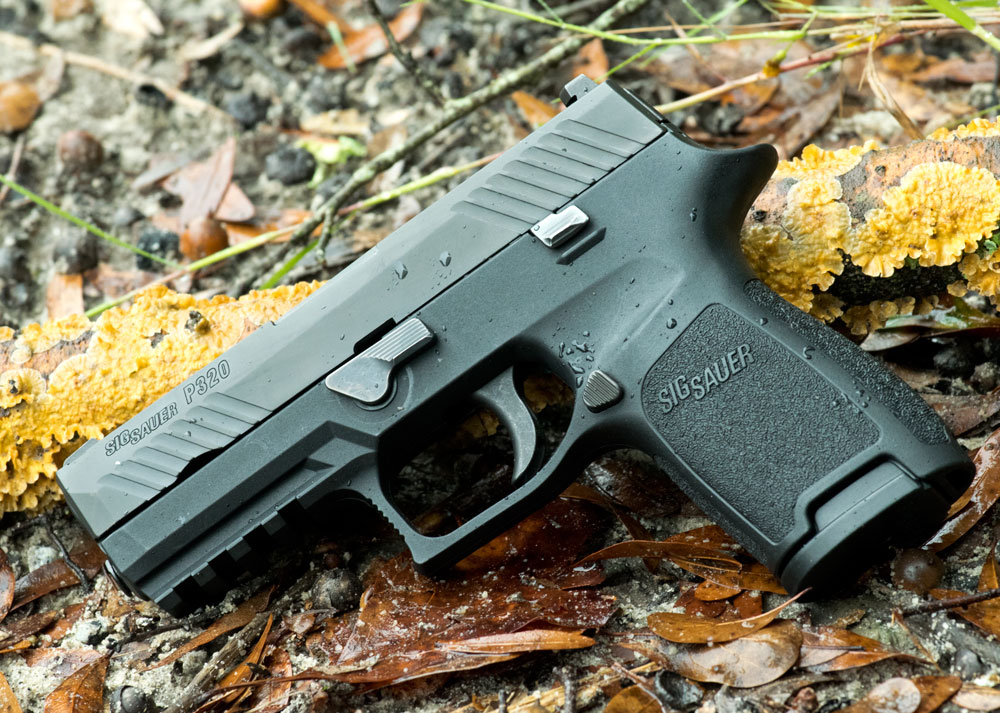 The new SIG Sauer P320 shifts shape and caliber with stunning ease, offering shooters a level of modularity never before seen with pistols.

If the AR-15 has taught manufacturers anything, it’s that Americans love modularity. Hell, people have been customizing cars, shoes and everything under the sun since antiquity. So it’s strange that no pistol has been as configurable and customizable as America’s favorite black rifle. At least, that was the case, until the recent introduction of SIG Sauer’s ultra-modular polymer-framed handgun, the SIG P320.

Skeptics out there are already bemoaning the impossibility of matching the AR-15’s countless array of aftermarket parts and ability to change calibers at will. They’re not wrong, but SIG is circumventing the limiting nature of pistol designs regarding caliber by redefining what the pistol legally is. As with any firearm, the ATF classifies the serialized part as the de facto firearm. That serialized part cannot be sent directly to an individual’s home without a proper FFL.

This is important because for most polymer pistols, shooters wanting a different color grip or a new variation must buy a new handgun. SIG’s solution is to create a modular internal frame component consisting of a trigger group and serialized receiver that can accept different grip types, colors and even calibers. Because those parts aren’t considered “firearms,” they can be sent directly to the shooter’s home. SIG even renamed the grip component as a Grip Shell to further distinguish it from the serialized portion.

I know what you’re thinking: I mentioned the word “serial” a lot in the previous few paragraphs, and also, the concept of modular Grip Shells sounds familiar.
It should. SIG introduced this idea back in 2007 with its P250 line of handguns. The major difference between the two is the method of cartridge detonation; the P250 is hammer­-fired, while the P320 is striker-­fired. The reason SIG made this change is because they found, like so many others, that Americans are now fully accustomed to striker-­fired handguns. Between their ever-consistent trigger pull, snag­free internalized design and idiot­proof simplicity, these pistols are an easy sell to new shooters and veteran handgunners alike.

The model reviewed is the P320 Compact. It differs from the full-sized model in three regards: It has a smaller grip shell, shorter slide/barrel and takes reduced capacity magazines. However, the Compact’s grip shell still accepts full-sized magazines and even the full-length slide assembly. Alternatively, the full-sized barrel can be installed in a compact frame, but it protrudes out past the end of the frame.

The obvious advantage of this modularity is for shooters who want to buy a carry pistol that can also be converted into a full-sized bedside gun or competition handgun. The less obvious benefit is the translation of skills and muscle memory from range plinker to carry gun. Most people don’t get enough trigger time on their concealed carry pistol to be as effective as possible in a life or death situation. The reasons are many, but for most it boils down to carry guns being unpleasant to fire.

They choose something too powerful, too compact or both. The P320 alleviates this by making the choice less permanent. Shooters who bought the P320 Subcompact in .357 SIG can change their pistol’s configuration to a compact model in 9mm Parabellum if the recoil and cost of .357 SIG is too great.

Another benefit of the interchangeable Grip Shell system is it also takes pressure off new shooters looking for a first pistol. Many newbies don’t yet understand what constitutes a properly fitting handgun, but after weeks or months of shooting experience, they may find their chosen handgun could be better. Now, these shooters can purchase additional Grip Shell sizes as their taste matures.

For example, I’m a small-handed shooter, and my first handgun was a second generation Glock 17—basically a polymer 2×4. After thousands of rounds downrange, I became proficient with the handgun and learned to work around the ill-fitting grip, but I could have been much better served with a thinner or smaller-gripped pistol. With the small diameter grip on the P320, even my petite wife can reach every control on the pistol without shifting her grip—something she can’t even do on a 1911.

The number of controls on the P320 is also very limited. There are four controls on the entire firearm: the trigger, magazine release, slide stop and disassembly lever. Notice the lack of external safety on the handgun. To the uninformed, this may seem like a recipe for disaster, but truthfully it shows SIG understands what combat or concealed carry pistols need most. Simplicity.

Lethal force experts like Massad Ayoob speak at length on tachycardia and the resulting loss of fine motor skills during firefights. With a shooter’s heart beating loud enough they can’t hear their surroundings, the last thing an adrenaline-fueled, shaky-handed defender needs is to mess with a safety lever.

Self-defense theory and tactics aside, the P320 lives up to SIG’s reputation for creating solid, dependable handguns without compromise. In testing, the P320 Compact was shot with all frames and two variations of magazines (full and compact length) and ran without issue across 600 rounds of various ammo types. This included Hornady TAP, Wolf, Tula Brown Bear, Winchester White Box, Winchester +P NATO spec and even some Buffalo Bore rounds.

Additionally, since SIG was kind enough to include their P320 Compact Conversion Kit, I ran all the variations of barrel and slide assemblies possible and never managed to cause the pistol to malfunction. I even had a chance to run the P320 Compact with an extended, threaded barrel topped with a SilencerCo Osprey 45 sound suppressor. Surprisingly, the SIG made an excellent host—not simply because of its great ergonomics and stellar reliability, but also due to its reduced weight. This is surprising because I was initially concerned the light heft of the P320 Compact would balance strangely with the oversized suppressor. In reality, the handgun’s insubstantial mass helped counter the added heft of the can, making for a quick-shooting, fast-pointing dynamic duo.

Accuracy from the P320 is on par with other handguns of the same size, performing better than most shooters can manage. The fixed sights were thankfully dead on from the factory and—much to the delight of defensive-minded shooters—are photoluminescent for fast sight acquisition in low-light settings.

The pistol ships with a kydex holster, two 13­-round Mec-Gar magazines and a fitted polymer carrying case. Additional Grip Shells, holsters, magazines, barrels and other accessories can be purchased either directly from SIG or other resellers. The P320 Compact retails for between $628­-$713 depending on configuration and package. Additional Grip Shells run a little under $50, which is significantly less expensive than a new pistol.

With an MSRP under $700 and street prices even lower, the SIG P320 is one of the least expensive ways to get a high quality SIG pistol. Add to this its ability to incorporate different frames, calibers and colors, and shooters get an ultra-modular pistol from a trusted manufacturer with decades of experience building combat-ready pistols. Shooters torn between various sizes and capacities of pistols can’t find a better solution to their pistol woes than the SIG P320 Compact.

This article appeared in the November 2015 issue of Gun Digest the Magazine. Click here to download the full issue.