One of the Glock's first subcompact pistols, the Glock 26 set the standard for concealable double-stack 9mms.

How the subcompact Glock 26 excels as a carry pistol:

The Glock 26 and Glock 27 were introduced at the same time in July, 1995. They were the first of the subcompact Glocks, often affectionately called “Baby Glocks.” The Glock 26 is chambered in 9×19 and the G27 is chambered in .40 S&W. It was only natural to go with these two calibers for the first of the subcompacts, for two reasons. First, these are the two most popular calibers in total Glock sales. Second, these are the two most popular issue calibers for police departments. 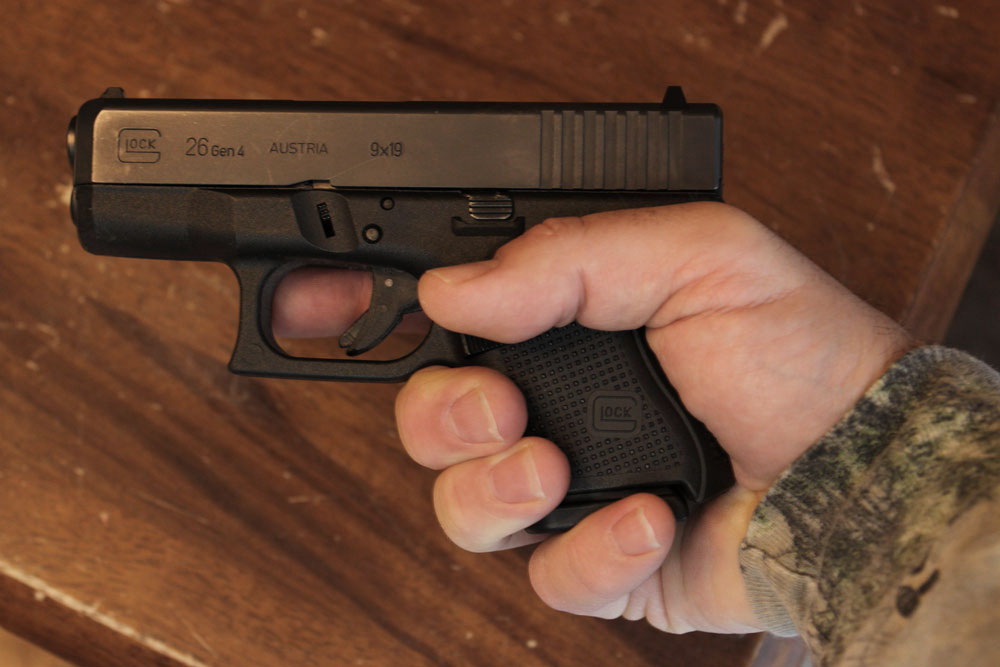 As with all standard-frame Glocks, the beauty is in the universal controls. It doesn’t matter if you’re handling the long slide G34, the G17 or G19, the G26 or G27, the .45 GAP pistols, .357 pistols, or any other standard-frame pistols, the controls are in the same location. The only Glocks that are different are the large-frame Glocks (like the G20), and the slimline Glocks (like the G42). Even those have the controls located in the same relative place on the frame, the only difference being that the differing thicknesses of the respective frame changes how your thumb interacts with those controls.

The Glock 26 is my current everyday carry (EDC) pistol. Wisconsin is pretty new to concealed carry, and being a writer I’ve had the luxury of testing out many different concealed carry pistols. I started with wanting the smallest pistol I could find, which ended up being a little .380. Then I wanted something with more horsepower, which landed me a compact .45. Except that it wasn’t that compact, and I tired of trying to prevent it from printing. That’s about the time all the micro-nines hit the market, and I’ve tried most of them.

My initial carry 9mm was a nice little pistol, and reliable. But some of the parts on it seemed to wear out fast. The second one I tried is one of the fanciest on the market, but is the least reliable pistol I’ve ever owned. One failure per magazine is terrible, and this wasn’t just mine, but a widespread problem. I tried a couple of other micro-nines, and found one that is really great, except I don’t care for the trigger.

About that time rumors were swirling about the new Glock G42 coming out, which everyone thought would be a single-stack 9mm. If it was, it would be exactly what I was looking for. If you know one Glock, you pretty much know them all, and I like what I know about Glock pistols. But when it was released, it wasn’t a 9mm. So I turned to the Glock 26, and I love it. I can’t picture carrying anything else for my EDC. It’s not quite as thin as I would like, but in exchange, it holds ten rounds in a standard mag, with the ability to use full-size G17 magazines (and will also work with G19 magazines). So I carry the 10-round magazine loaded, with a 17-round magazine on my belt.

How The G26 Measures Up

For the most part, though, there’s not going to be a lot of weight difference, and there shouldn’t be. There are three parts to the Glock that are reduced to make for the compact and sub-compact models: the frame (the bottom of the mag well and the front of the dust cover), the slide, and the barrel. The only part that can be shortened with impunity is the frame, but that’s only half an inch of polymer shell in two different places. The weight difference between the three frames is 3/8 of an ounce each.

The thing is, the 9mm cartridge creates basically the same recoil when fired, whether it’s from a G26, G19 or G17, which means you still need the same force to counter the force of recoil. The barrel and the frame comprise one of the two ways to counter the force of recoil, the other being the slide spring. You can’t have a significant reduction of weight in the slide and barrel, because you still need that counterweight.

Each model has a specific slide weight that it needs to cycle properly, and to achieve that, a portion of the slide wall is reduced so that it is thinner. The G17 reduces the slide wall about three-fourths of an inch from the front of the ejection port. The G19 doesn’t reduce it until after an inch and a half. The Glock G26 doesn’t reduce it until as far forward as possible, which actually ends up being at the same place as the G19. To make up for the extra mass it needs, it uses the slide spring.

Unlike the compact and standard-frame Glock models, the G26 and other sub-compact models do not have an accessory rail on the dustcover. This means that you won’t be able to mount a flashlight on it, and if you’re looking to add a laser it will have to be mounted in a different manor, such as on the grip or the slide spring. The front of the slide is also beveled, which I think makes it look nice, and not so boxy. The lack of a rail (and thus accessories) and the beveled slide front make for a really smooth, easy slide into a carry holster.

For more information on the Glock G26, please visit www.glock.com.

Editor's Note: This excerpt is from Glock Reference Guide.