While other makes and models have come and gone, Glock 10mm pistols have been stalwarts for the caliber from nearly the start.

What Are The Glock 10mm Options:

Wickedly powerful and more versatile than a Swiss Army Knife, the 10mm has mesmerized the shooting public early this century. Yet had a few things played out differently, the “Big Ten” might have gone the way of the .44 Auto Mag, a gun safe curio and dust gatherer. 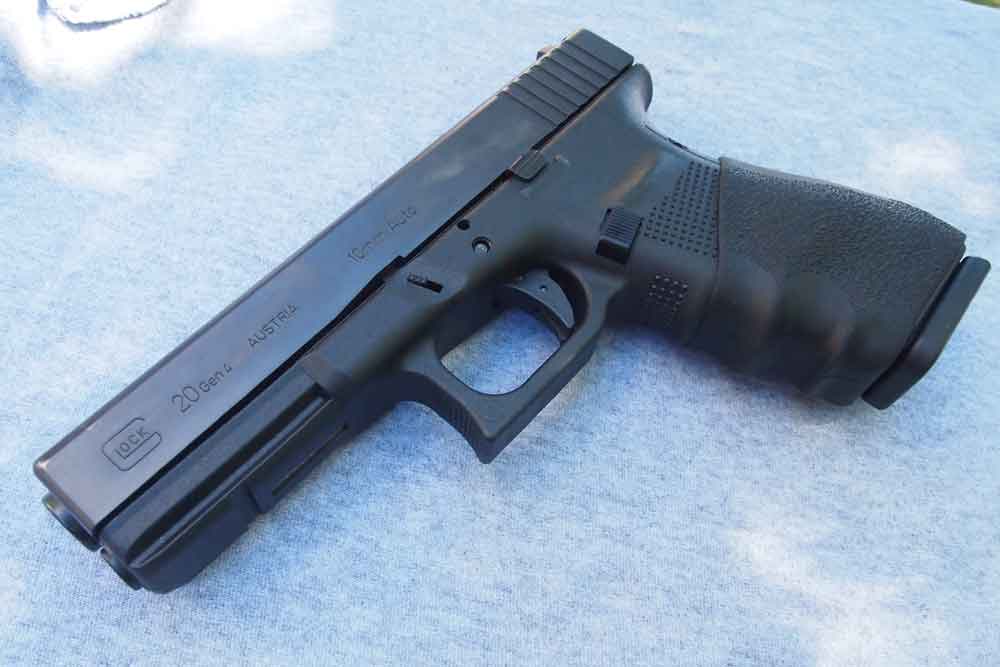 A riches-to-rags story, the powerful .40-caliber burned dog-days hot to start in the 1980s, and all but petered out a decade later. By 1994, the FBI jettisoned its experiment with the cartridge, after a mild 10mm service load prompted the advent of the .40 S&W. Smith & Wesson called it quits on the 1000 Series (in part due to reliability issues of some models) by 1993. Colt followed suit three years later, jettisoning its Government Model 10mm, the Delta Elite, which the company has reissued. By all accounts, Col. Jeff Cooper’s brainchild was on the verge of a Puritan-level shunting and didn’t have many friends in the world … well, almost.

One stalwart emerged, perhaps when the 10mm needed it most — Glock. The Austrian gunmaker doubled down on the near-magnum, semi-automatic pistol cartridge when others were running away. The first Glock 10mm hit the scene in 1991, the standard-bearer G20, the company’s effort to capitalize on U.S. law enforcement’s interest in the hard-hitting cartridge. Along with the .40 S&W G22 and .45 ACP G21 (released that in '90 and '91), it was among Glock’s first forays away from the comforts of the 9mm — which all its guns have been previously chambered. More daringly, it expanded its 10mm catalog seven years later, when the cartridge seemed on the outs, with the sub-compact G29.

Thrown lifelines at absolutely the right time, the Glock 10mm options kept the cartridge’s heads above water. One might even argue the pistols helped save it and laid the groundwork for today’s renaissance. While the calibers availability was hit an miss with other companies, Glock stood true and always offered an affordable option for those curious about the 10mm. There was a lot of muscle behind the company embracing the cartridge, one it continues to flex today.

A prairie fire, the 10mm has swept across the gun world recently. At companies where the cartridge was a second- or never-thought, there now resides at least one model that feeds on it. The past decade has been particularly fruitful, with a good swath of major manufacturers, all coincidently, finding it high time to put a 10mm in their catalog. However, each of them is playing a game of catch-up with Glock.

Going on 30 years of producing 10mm pistols, the manufacturer cultivated among the most extensive catalogs on the market today. In a caliber where one model is standard for most gunmakers, Glock boasts five, each tailored to cover nearly any conceivable application. These include:

G20 – The standard-sized pistol with a 4.2-inch barrel that started it all, now enhanced with Gen4 accouterments.
G20SF – Same as above, but with a short frame that offers a better grip for those with smaller hands (a little lighter too).
G29 – 3.78-inch barreled sub-compact model with full 10+1 capacity.
G29SF – Again, same as above, except with a short frame.
G40 – Long-slide model aimed at hunters, with MOS system that makes mounting an optic a snap.

Yet selection isn’t the only asset Glock 10mm pistols have in their corner, nor the only reason why they should at least be a consideration if the supercharged .40-caliber bug has bitten you.

In most cases, the 10mm isn’t exactly betting at the $2 window. Given the majority of the guns chambered for the cartridge are 1911, they tend to draw a premium.

There are, particularly in the semi-custom end of the spectrum, specimens that demand up to $3,000 or more — not necessarily within every shooter’s budget. Even the more “affordable options” from companies typically not known to scour your wallet, you’re still looking at around $1,000 investment, give or take $100.

Mercifully, with a Glock 10mm you’ll spend almost half the coin. Most fall in the $550 to $700 range, putting them within reach of nearly every shooter. The high end is a bit spendy for a plastic pistol, admittedly, but that’s the G40, which comes with some high-end extras rare in this price range.

Glocks aren’t modular pistols, even the 10mm iterations. Yet, their ease of upgrade shares a similar level of versatility.

Take the G20 for instance. With its standard 4.2-inch barrel, you have a capable plinker with mild loads and a pistol that’s still manageable for concealed carry (though a tad on the heavy side). Make a modest investment in a 6-inch Lone Wolf or even a factory barrel, and you’ll upgrade the G20 into a first-rate hunting pistol more than happy to digest the hottest rounds available.

That’s just the tip of the iceberg when it comes to aftermarket Glock parts. There are upgrades for nearly every inch of the guns. In many cases, even if you go the whole hog, you’ll spend less than other 10mm base models.

Yes, there is gritting of teeth out in the gun world in uttering “Glock” and “tradition” in the same sentence. It’s expected, given the Colt Single Action Army and 1911 remain among the most coveted guns out there, despite their 100-plus year vintages. Yet few companies can boast a longer or more dedicated affiliation with the 10mm than Glock. Additionally, Glock has become renowned for its reliability — no matter the model — for a reason. They are boringly dependable. Glock is indelibly entwined with the 10mm and most likely will be as long as the cartridge continues currying favor. And that’s good news for anyone who loves the hard-hitting cartridge — even if they never pull the trigger on a Glock 10mm.