Long anticipated, the Colt Python relaunch has finally come and looks well worth the wait.

How Has The 2020 Version Of The Colt Python Been Enhanced:

Day one of the return of Colt’s “snake guns” the lingering question has been: When will the gunmaker bring back the Python? For many, the belief was never. Sure the market interested was there for perhaps the greatest double-action revolver ever created, but there was no way they could produce one affordable enough. Color the naysayers (me included) wrong.

The New Year has been kicked off with the relaunch of the Colt Python, a version the company promises stays true to the original, while offering some need enhancements. To that end, where those familiar with the line will notice the biggest difference is in the 6-round .357 Magnum’s trigger pull. While smooth, the old Python tended to have a somewhat capricious trigger pull shot-to-shot, due to the high amount of hand fitting the handgun required. The Colt solved this by re-engineering the fire-control so it has a predictable and consistent break both in double- and single-action.

In addition to an improved trigger, the new Colt Python also boasts a beefed-up frame above the cylinder, a user-replaceable front sight from the Colt King Cobra (hex-screw attached), a redesigned target rear sight and a recessed target crown on a one-piece barrel. The company also said it's using stronger stainless steel in the gun's construction. Outside of that, the Colt’s new king snake has the same look and feel of the original. It’s fairly obvious the company tried to stay true with the gun’s aesthetics, especially with full underlug and a vented rib on top of the barrel.

As to the tale of the tape, the Colt Python will be available in two barrel lengths: 4.25 and 6 inches. The 6-inch model measures out at 11.5 inches in overall length, 5.5 inches in height and tips the scales at 46 ounces. The 4.25-inch barrel model is 9.75 inches in overall length, 5.5 inches in height and 42 ounces in weight. As to trigger-pull weight, the revolver trips at around 7 to 9.5 pounds in double action and it has six-groove rifling features a 1:14-inch twist to stabilize a majority of .357 bullet weights. The Python is finished off with checkered walnut grips, topped with a Colt medallion.

The big question that remains is the price. As expected, Colt isn’t handing them out, but an MSRP of $1,499 shouldn’t prove a major obstacle for those champing at the bit to add a Colt Python to their collection.

If you fall into the pins and needles category regarding the re-release of the Colt Python, there will be a complete muzzle to butt review of the iconic revolver in the February 2020 issue of Gun Digest the Magazine. Look for it on newsstands or Subscribe Now!

WEST HARTFORD, CONN., (January 1, 2020) – After years of research and development, Colt releases a refined and upgraded Colt Python. The legendary double-action revolver, which originally debuted in 1955, returns in stainless steel in 4.25” and 6” barrel lengths.

“We know the Colt Python is one of the most beloved and collected firearms in American history, and its re-release has long been demanded by enthusiasts,” said Justin Baldini, Product Director at Colt. “We took our time on R&D – we needed to be sure the look and performance of this redesign lived up to its legendary name and kept its impeccable reputation for quality and accuracy. This new Python lives up to the legend in every way.” 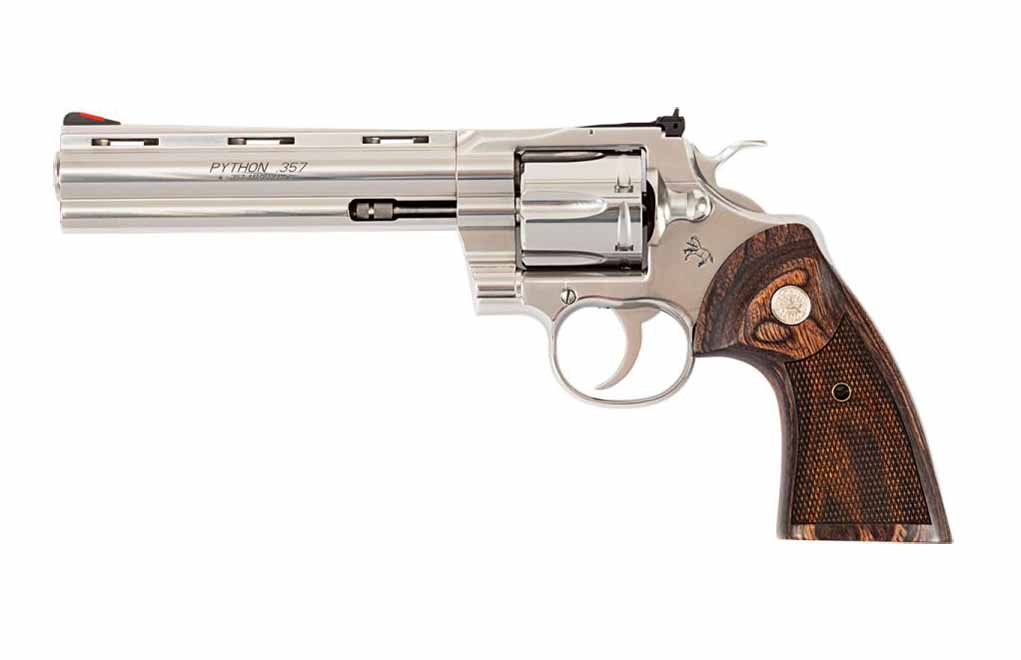 The Colt Product Innovation Team refined the design of the new Colt Python and performed rigorous testing, ensuring it meets the demands of shooters and collectors. Numerous improvements were made to reinforce the revolver, including the use of stronger stainless steel alloys and a re-designed rear sight which allows for a 30% increase in the cross-sectional area of the top strap — meaning more steel beneath the rear adjustable target sight, for a stronger revolver and more robust shooting experience.

Minimizing the amount of parts in the trigger action has simplified the mechanism, elevating its reliability and allowing for more straightforward maintenance. The testing process included over 40,000 trigger pulls on a single Python. Trigger pull scans show lighter trigger pull weights, less friction and increased consistency, re-enforcing the Python’s reputation as a gun that can be heavily used and passed down through generations.

Finally, Colt builds on the modern Snake Gun legacy by adding features such as a recessed target crown, user-interchangeable front sight, and an updated Walnut grip to make this the most user-friendly Python ever. The DA revolver is chambered in .357 Magnum and also accommodates 38 Special cartridges.

For more information on the Colt Python, please visit www.colt.com.