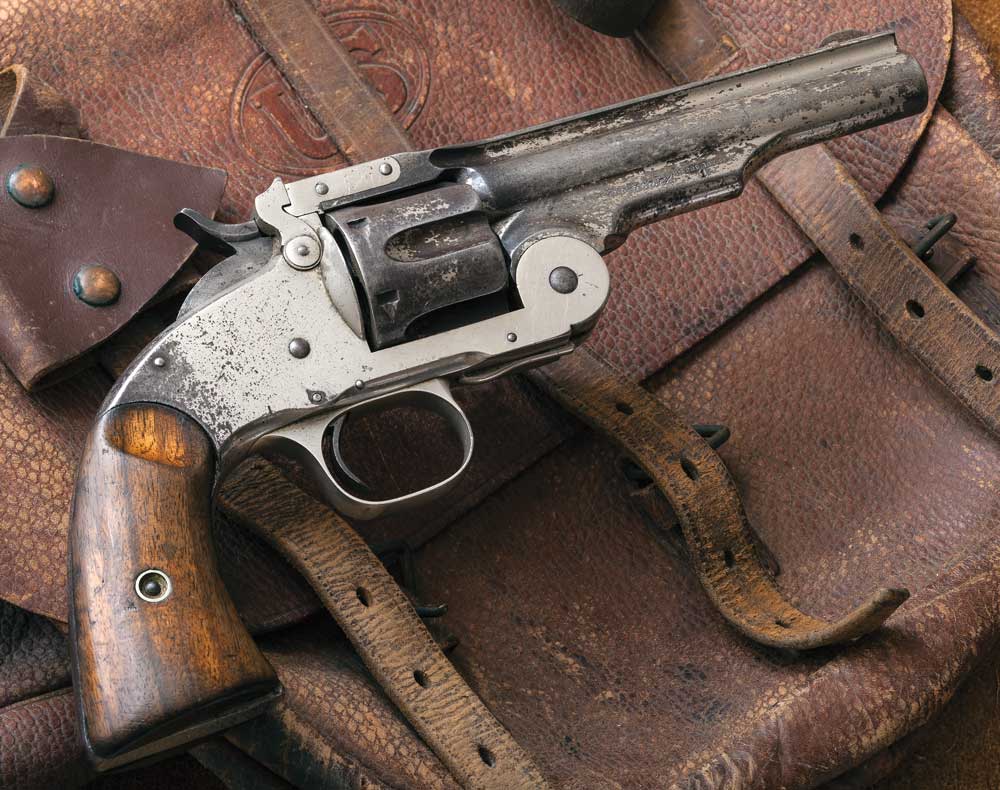 Smith & Wesson's Schofield revolver has captured firearms enthusiasts' imaginations since its inception and has played an impressive role in American history.

The Smith & Wesson Schofield (usually pronounced SKO-field rather than SHOW-field) revolver is probably the best known by the general public of any of the Model Threes, and the one most associated with the Old West in the collective American imagination. Such is its popularity that some gun enthusiasts who are not familiar with the older S&W’s will tend to call any large frame S&W top-break a “Schofield.” It has received some exposure in movie and TV westerns, most notably and recently in Clint Eastwood's “Unforgiven,” but also in earlier efforts such as “Nevada Smith,” “Trackdown,” and “Alias Smith & Jones.”

The Schofield revolver originated with the efforts of Col. George Schofield to improve the American Model Three for military usage. The American was the first cartridge revolver adopted by the military in 1870, with a purchase of 1,000. However, in 1874 the Army purchased 8,000 Colt Single Action Army models, noting a preference for their strength and simplicity. In Army tests of this era, S&W Americans and Russians passed the firing and functioning criteria, but were criticized for their complexity and number of parts. The greater ease and speed of reloading was noted, but was not given much credence as a tactical advantage. The Russian model was criticized for the awkwardness of its grip, hammer, and trigger-guard spur.

As early as 1871, Schofield had been working on improvements to the S&W American that he felt would render it more suitable for military usage. The most obvious of these consisted of changing the latch from barrel mounted to frame mounted. The Schofield model was tested and met with military approval. They requested that it be produced for the .45 Colt cartridge. S&W demurred, noting that the rim of the .45 Colt was inadequate for positive extraction in the S&W design, and no doubt considering that the cylinder and frame of the Model 3 would have to be lengthened to accommodate the long round. Instead, S&W offered to redesign the military cartridge to a .45-caliber round that would function in both types of revolvers. This was found acceptable, and 3,000 S&W Schofield’s were initially ordered in 1875. Further minor modifications were made, and an additional 5,000 in the Second Model configuration were delivered in 1877. By the end of 1877, the Army had purchased around 8,000 S&W Schofield’s, and around 15,000 Colt SAAs. A few guns were made for the civilian market, but the vast majority of Schofields were military guns.

Many Schofields were issued to active units, reportedly including the 4th, 9th, and 10th Cavalry. The 4th was involved in the Geronimo campaign. The 9th and 10th comprised the famous “Buffalo Soldiers” – African American troops stationed in the American Southwest. There they fought in the Indian Wars, including campaigns against the Apaches, and served in civil disturbances such as the Lincoln County War.

A Schofield revolver believed to have been used at the Battle of the Little Big Horn is owned by the Smithsonian Institution, although it has never been clear which side its owner was fighting on. After the annihilation of Custer and his men, there was some argument in print that the outcome might have been different had the troops been armed with Winchester repeaters and the fast loading Schofields instead of single-shot Trap doors and slow-reloading Peacemakers.

Col. Charles Pate, noted authority on S&W military revolvers, writes that the big S&W was still in use by regular army units as of 1887. Several Pate articles on Schofields will be found in the 25th Anniversary reprints of the SWCA Journal. Springfield Research Service reports that some Schofields were apparently still in service with volunteer units in 1898 during the Spanish American War. However, many had been retired earlier. Many of the surplus Schofield revolvers were purchased by dealers such as Bannerman and Schuyler, Hartley & Graham. They were then offered for sale, often with the barrel cut to a handier 5-inch length and the gun nickel plated to withstand the rigors of Western usage. The combination of quick reload-ability and big .45-caliber power made them popular with lawmen, outlaws, and others who were serious about their sidearms.

It’s estimated that several hundred Schofields with the cut down 5-inch barrels were purchased by Wells Fargo to arm its messengers. The guns were marked by the company on the right side of the under barrel ejector housing by stamping over the Schofield patent. The marking reads “W.F. & COS EX” along with a re-stamping of the guns serial number. The S was dropped from the company name in 1898, and guns are found marked both ways, suggesting the period of use. It’s believed that all authentic Wells Fargo Schofields known to date have serial numbers under 6000. Schofield serial number 1 was among those used by Wells Fargo.

Three different sizes of numerals have been reported in the Wells Fargo serial number markings. Most common is the small size, about the same size as the company name abbreviation. A medium size was reportedly marked by the Chicago office, with a large size numeral being the scarcest.

Unfortunately, whenever a relatively simple marking adds interest and value to a gun, there is a temptation to forgery. This is the case with Wells Fargo Schofields, with faked markings not uncommon. A quick tip off to some fakes is the stamping of the company name. It is believed that on all authentic WF guns a line stamp was used. W.F. & CO EX stamped in uneven individual letters should raise immediate suspicion. The numerals in the stamping, on the other hand, were individually stamped, and their spacing may be uneven.

Schofields are sometimes found with a large two- or three-digit number, usually under 300, stamped on the backstrap. These have been called “San Francisco Police” Schofields. It is believed that these guns were shipped to San Francisco at the time of the Sandlot Riots, and eventually wound up with the California militia. An article by Charles Pate in Man at Arms magazine discusses this variation.

This article is from the Standard Catalog of Smith & Wesson, 4th Edition.