What Are The Best 300 Blackout Pistol Options:

Ah, the AR-pistol. Is there anything sweeter than these mighty mites? Fun as all get out to rattle off the range. Perfectly tailored to man the ramparts of your home. The abbreviated configurations of America’s favorite firearm are practically perfect in every way. OK, so they want in sending rounds waaaay downrange. But that’s what your 20-inch barreled baby is for, right?

Concerning these small-but-potent arms, they're pretty dang slick in 5.56 NATO, but sing when chambered 300 Blackout. After all, the eminently suppressible, hard-hitting .30-caliber was tailored for such guns—carbine and smaller that is. This is why the gun world is awash in top-notch 300 Blackout pistols.

Most familiar with ARs know you don’t have to go out and buy one specially chambered for the want-to-be 7.62×39mm clone. Completely compatible with average, every day 5.56 ARs, the 300 Blackout upper is a viable route into the caliber (though if you shoot suppressed you might have to up your buffer weight). However, given the options available, there are plenty of reasons and opportunities to buy a complete firearm.

Why The 300 Blackout Pistol?

Before we jump headlong into what the market holds, perhaps we should touch upon why you might want to go a 300 Blackout pistol. Certainly, you get all the nimbleness and convenience of the configuration in 5.56. But there are a few key reasons why the .30-caliber is better suited for compact ARs.

Essentially it boils down to performance and suppressibility.

Relatively speaking, the 300 Blackout is better suited to shorter barreled guns; in fact, it was designed for exactly this task. With most loads, a 9-inch barrel is enough bore for a complete powder burn. That said, like every cartridge, it gains velocity out of longer barrels to a certain point. Don’t be fooled, a 16-inch carbine in Blackout will outperform a 9-inch Blackout pistol. Dependent on load, firearm and environment, expect anywhere from a 250 fps to 350 fps difference between the lengths. Substantial in some circumstances. As to suppressibility, few centerfire rifle cartridges do it better. Though it’s important to enter this aspect of the cartridge with eyes wide open. Decibels don’t drop like flies with every load. Want to optimize the hush on a 300 Blackout pistol—or carbine—it’s a subsonic ammunition affair. Like all things in life, this entails tradeoffs.

Subsonic ammunition, as its name suggests, pushes bullets below the speed of sound. This eliminates the crack that coincides with the bullet leaving the muzzle caused by the projectile breaking the sound barrier. Additionally, given the use of heavier bullets (200-grains plus and thereabouts), the loads have a smaller powder charge compared to their supersonic counterparts. Essentially, this makes the suppressor’s job easier, since it has less expanding gas to dissipate.

A quick note on sub- and supersonic ammunition and suppression. General guidelines dictate a 1:7 twist rate (there are also the odd 1:5 examples) for subsonic 300 Blackout and a 1:8 or slower for supersonic. Logical on the surface, given faster twist rates are generally required for heavier bullets, but there is debate on the matter.

Many contend a 1:8 twist will stabilize heavy subsonic bullets. This may be true for some configurations, in certain environments, with particular loads. The issue is, get it wrong, send a bullet yawling at the muzzle and you’re contending with endcap and baffle strikes in your suppressor. Given the paperwork and money you spent on the can, is it worth testing twist-rates theories yourself? Short and sweet, the 5.5-inch barreled MCX Rattler is as compact as 300 Blackout pistols come. Granted you give up some ballistic performance, but gain a gat easy to transport and, yes, conceal (say in a backpack).

The Rattler runs a very dependable gas-piston system, which eliminates all the fouling typical in these short-barreled configurations. Additionally, the gun has one of the best brace systems going, a fast-deploying affair that cuts the size of the firearm nearly in half when folded in.

Interestingly, Sig is one of the gunmakers that subscribe to faster-than-usual twist rates for 300 Blackout—1:5. Thus, stabilizing subsonic ammo … not an issue.

The only spot on the Rattler is its trigger. The Sig Enhanced is heavy and not as responsive as you’d expect in a gun of this class, somewhat akin to a mil-spec job. However, the company’ Match Duo, with a 5.5 break, does a much better job of getting the most out of the pistol.
MSRP: $2,720; sigsauer.com 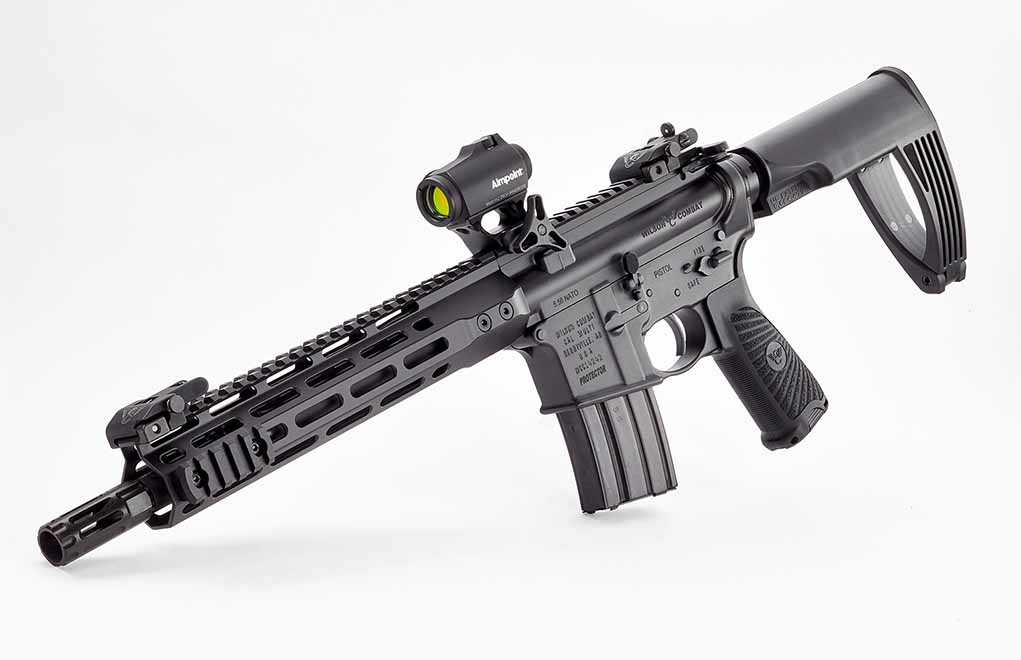 To the average shooter the price tag doesn’t quite reflect it, but the Protector is top-shelf Wilson Combat’s “entry-level” 300 Blackout pistol option. That said, and this being Wilson, don’t expect some off-the-rack experience with the gun. Compared to most everything else on the market, the 10.5-inch barrel (1:7 twist) pistol is an absolute Cadillac.

You get what you pay for, in this case a pistol loaded with the company’s high-performance custom parts and extras you won’t find on “economy” models. To this end, the Protector boasts Wilson’s excellent M2 two-state TTU trigger, factory set to between 4.5 to 5 pounds. Boasting nice crisp break, the trigger also has a short reset allowing the gun to run fast.

Furthermore, the gun is outfitted with Wilson’s proprietary handguard, a fairly light affair that is M-Lok compatible and features a 4-inch accessory rail, as well as quick-detachment sling mounts. As to the brace, it’s a Tailhook Mod 2, an adjustable model that does an excellent job of settling in the gun.

A final note, the Protector is a very shootable pistol, thanks in part to its heft (a shade under 6 pounds). But Wilson’s Q-Comp flash hider/muzzle brake also does its part in keeping the gun manageable.
MSRP: $2,000; wilsoncombat.com A late adopter of the AR, Springfield Armory has since risen to the top of mid-priced configurations. Fitting right into this slot is the Saint Victor 300 Blackout Pistol. In the same breath, the gun is compact enough to enhance its nimbleness, yet big enough to ensure the cartridge’s ballistic integrity. Also, it’s loaded with frills not often found at this price point.

Some of these “extras” include a top-end self-lubricating nickel-boron trigger, suppressor-ready heavy tungsten buffer, adjustable SB Tactical SBA3 brace and forward hand stop. Even though the Victor has a 9-inch barrel (1:7 twist), the last feature is a nice piece of mind.

The only complaint is the 300 Blackout’s A2 flash hider. Pretty standard, yes, but the 5.56 rendition comes with Springfield’s forward blast diverter. The company’s thinking must be a suppressor is going on there anyway, so cut costs with the standard muzzle device.
MSRP: $1,100; springfield-armory.com Another latecomer to AR manufacturing, Ruger has proven fast in picking up the rules of the game. Build a gun that works and, by gum, the world will beat a path to your door. So goes the AR-556 line of ARs. The 300 Blackout pistol model is no different, but few shooters miss the bells and whistles with a gun that goes bang with every trigger pull and hits the mark.

As to the tale of the tape, the gun has a 10.5-inch cold hammer-forged barrel (1:7 twist) and comes in at a very agile 5.8 pounds. Combine the heft with a quality suppressor and the Blackout’s recoil is negated to next to nothing, giving the pistol excellent follow-up shot accuracy. Hampering this a bit out of the box is a mil-spec clone trigger, easily rectified with your favorite upgrade model. As far as stabilization, it features the fairly standard SB Tactical SBA3 brace.

Honestly, there’s not a ton to ballyhoo on the pistol other than it runs, dependably so. What more can you ask for?
MSRP: $949; ruger.com 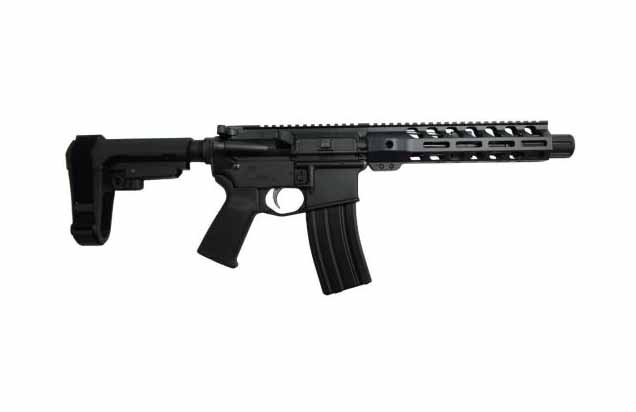 When it comes to affordability, most figured Palmetto State Armory was going to show up sooner or later on this list. The company has several 300 Blackout pistols worth considering and fairly comparable in construction. We tend to the 7.5-inch SBA3 model, given it’s the rare smallster in the caliber that doesn’t demand a king’s ransom.

The gun is boringly reliable and is sized to be a near-constant companion—at least anywhere you’ll tote a rucksack. It boasts the nice extra of a forward flash diverter, clearing the line of sight for fast follow-ups and target acquisition.

Though, the pistol is a 1:8 twist rate affair. Depending on where you stand in the stabilization debate, this could prove a dealbreaker. However, if you’re shooting supersonic, it’s right on target.
MSRP: $700; palmettostatearmory.com