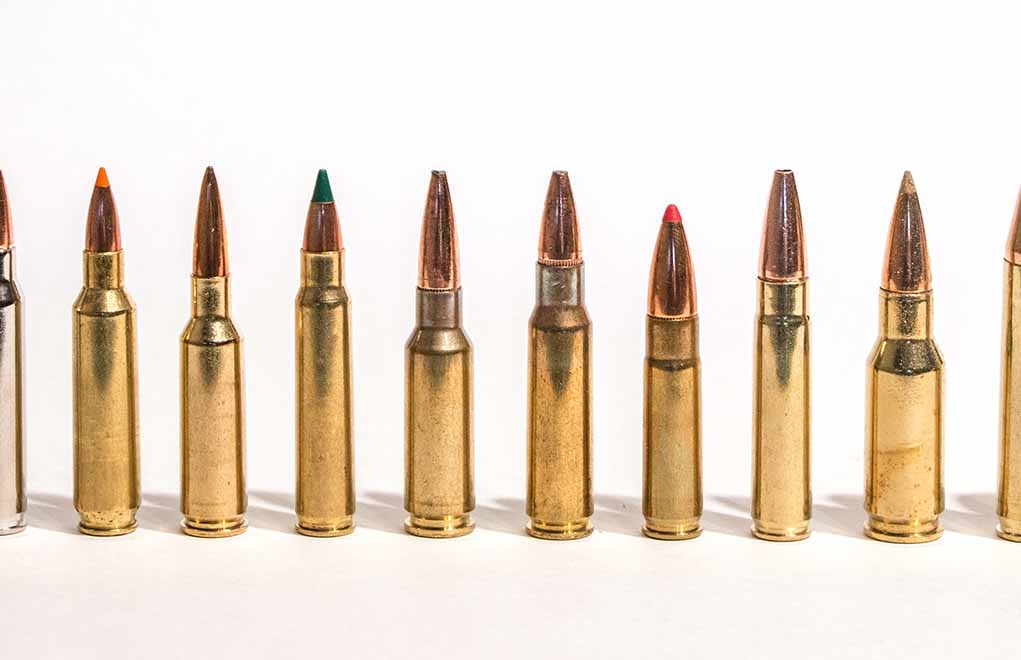 AR-15 calibers and cartridges are legion. Finding the right one is a matter of matching it to the job you want your rifle to perform.

What Are the AR-15 Cartridge Choices:

You want to buy an AR-15 but can’t decide for which cartridge it should be chambered. Well, maybe this rundown will help. The key to getting the right cartridge for an AR-15 is to perfectly match the cartridge to the jobs you’re going to ask the rifle to perform. Choose wisely, or you might have to choose again. However, in the end, choosing more than one might actually be the best and the right answer.

Introduced by Hornady in 2004, the .204 Ruger’s parent case is the .222 Remington Magnum. It’s loaded with a 0.204-caliber bullet typically weighing between 32 and 45 grains. Intended as a fast-stepping varmint cartridge, it’s capable of pushing the lightest bullet weights to well beyond 4,000 fps. Early on, it seemed that the .204 Ruger would be very popular, but a lack of rifles available for it has led to a diminished attractiveness.

These days, you’ll have trouble finding complete rifles chambered for the .204 Ruger, with the DPMS LR-204 being one of the few currently available. If you want one, your best bet is to build your own rifle or upper, which, given the modularity of the AR-15 platform, is not all that hard to do. The .204 Ruger is ideal for prairie dog shooting and target work. Given the minimal recoil, it’s especially pleasing to watch your bullets impact these little vermin.

Because the .223 Remington is unquestionably the premier cartridge for the AR-15, you’ll find more ammunition options for it than any other. To some extent, this cartridge is interchangeable with the 5.56 NATO. However, 5.56 NATO ammunition should not be fired in rifles marked “.223 Remington.” On the other hand, feel free to shoot .223 Remington ammunition in a 5.56 NATO rifle.

With a wide selection of factory loads, and with bullets ranging in weight from 35 to 75 grains and available in many styles from frangible to monolithic, the .223 Remington is the most versatile AR-15 cartridge. It’s ideally suited for varmints, home defense and even game as large as feral hogs and deer (bullet selection is paramount).

Load Up On More AR-15 Knowledge:

Based on the 6.8 SPC case and necked down to .224 caliber — but with a rebated rim the same size as the .223 Remington — it’s easy to convert an AR-15 in .223 Remington/5.56 NATO to .22 Nosler. All the conversion requires is a new barrel and 6.8 SPC magazines. Unfortunately, Nosler is the only company offering ammunition for this cartridge.

With almost 25 percent more powder capacity than the .223 Remington, the .22 Nosler has the ability to push bullets devilishly fast. Depending on the bullet style, it can be argued that the .22 Nosler is the fastest- and flattest-shooting AR-15 cartridge. It will push a 55-grain E-Tip bullet to 3,300 fps, which is more than sufficient for deer hunting. The 55-grain Ballistic Tip at about the same speed is ideal for varmints, coyotes and such.

With a case shape inspired by the 6.5 Creedmoor, the .224 Valkyrie is one of the newest AR-15 cartridges. The 75-grain Hornady hollow-point load has a muzzle velocity of 3,000 fps, and the 90-grain Federal Sierra Match King load will leave the muzzle at 2,700 fps. The first is ideal for varmints, and the latter is great for long-range shooting. However, Federal also offers a 90-grain Fusion soft-point load that will work splendidly at extended ranges for hogs, deer and pronghorn.

Like the .22 Nosler, the .224 Valkyrie is based on the 6.8 SPC case. However, the Valkyrie retains the 6.8’s 0.422 rim diameter; but the case is highly modified to work with long and slender bullets with high ballistic coefficients. The cartridge seems to be gaining lots of traction with those who wish to push the distance with an AR-15. And, with a wider variety of loads from several sources, it looks to soon outperform the .22 Nosler, at least from the standpoint of sales.

Created in 2008 to make the AR-15 big-game legal in every state that allows bottlenecked rifle cartridges for deer hunting, the .25-45 Sharps is nothing more than a .223 Remington case necked up to .257 caliber. It approaches the ballistics of the time-proven .250 Savage with an 87-grain bullet, and it allows the AR-15 to be used in the few states that will not allow .224-caliber cartridges for deer hunting.

The .25-45 never really got off to a good start commercially; no major manufacture is offering ammunition for it, and what little popularity it had seems to be in decline. Regardless, it’s an ideal cartridge for the AR-15. It offers varmint and big-game capability and minimal recoil, and because it uses the .223 Remington case, handloaders should never be short of ammunition.

If there were ever a cult cartridge for the AR-15, the 6.5 Grendel is it. Based on the .220 Russian/7.62×39 Soviet case, the 6.5 Grendel was introduced in 2003 by Bill Alexander of Alexander Arms. It’ll push a 120-grain bullet to 2,700 fps; and because of the naturally high ballistic coefficient of 6.5-caliber bullets, the Grendel shoots very flat.

Interestingly, the Grendel has never really caught on with mainstream AR-15 aficionados. This is somewhat perplexing, because it’s one of the best multipurpose cartridges for the platform. And, factory ammo is offered by a variety of manufacturers, such as Hornady, Federal, Alexander Arms and Underwood Ammunition. If you’re looking for a do-all AR-15 cartridge, the Grendel will suffice … and you can belong to a cult group that thinks it’s the best cartridge of any kind that has ever been invented.

Designed between 2002 and 2004, the 6.8 SPC was created by Remington with assistance from the Army Marksmanship Unit to possibly replace the .223 Remington as the primary small arms cartridge for the military. Initially, it was very popular, and those who used it claimed it was superior to anything else that could be fired from an AR-15.

However, as of late, the popularity of the 6.8 SPC has waned. And, too, now there’s a 6.8 SPC II version with different chamber dimensions — and this totally confuses potential buyers. (6.8 SPC ammunition shoots just fine in a rifle with a 6.8 SPC II chamber.) Ballistically, the cartridge cannot compete with the more modern .224 Valkyrie, which will handle much more-aerodynamic bullets.

One thing the .300 Blackout does have going for it is minimal recoil with supersonic ammunition. This makes it a great cartridge for young or new shooters who are looking to hunt with the AR-15. And, there’s a good selection of supersonic hunting loads to choose from. However, the true forte of this cartridge is subsonic work, and there, it reigns as the supreme subsonic cartridge for the AR-15.

Introduced in 2018 by Wilson Combat, the .300 Ham’r might be the best general-purpose cartridge for the AR-15 platform. It essentially duplicates the external ballistics of the .30-30 Winchester, which makes it suitable for most of the big game on the planet … at least at modest ranges. Wilson Combat offers a wide variety of factory ammunition for the .300 Ham’r, with loads that are suitable for varmints, personal protection and big-game hunting.

Right now, the cartridge’s weakness is that ammunition is only available from one source; and, given its .30-30-like ballistics, it’s only suited for moderate-range engagements — regardless of the target. Still, unless you want to play on the other side of 300 yards, it’s a fantastic multipurpose cartridge for the AR-15.

Introduced by Remington in 2008, the .30 Remington AR is, indeed, the best big-game cartridge for the AR-15. The problem is that Remington screwed it up, and few could see past what they feared was a looming ban on their favorite rifle. First, it was introduced right about the time the AR-15 craze hit America, and the masses were only — mostly — buying ARs chambered for the .223 Remington. Then, Remington did a terrible job marketing the .30 Remington AR. For example, it released external ballistic data that listed the cartridge’s 300-yard velocity as its muzzle velocity. Not good!

Created specifically for deer hunters in states now allowing straight-wall centerfire rifle cartridges, the .350 Legend is essentially a .223 Remington case with no taper and a .35-caliber bullet. At the muzzle, it can produce more energy than the .223 Remington, .30-30 Winchester and .300 Blackout, and it recoils 20 percent less than the .243 Winchester.

Winchester is offering a wide array of factory loads for the .350 Legend, with bullet weights ranging from 145 to 265 grains. Make no mistake: This is a cartridge designed for deer hunting. Could it be used for other things? Things such as feral hogs? Sure. Personal protection? Sure. Will it find the love and affection of AR-15 aficionados, or will it go the way of the .30 Remington AR? That remains to be seen.

Introduced about a decade ago, it looked as if the .450 Bushmaster was going to be the hottest new thing for the AR-15. It was for about a year. Then, it seemed as if no one cared anymore. It’s a powerful cartridge; it will push a 250-grain bullet to 2,200 fps. But, it has a trajectory like a rainbow, and the recoil will get your attention in a lightweight AR-15. Until last year, it looked as if the .450 Bushmaster was the .450 “Forgotten.”

But then, the same new laws that spawned the .350 Legend brought the .450 Bushmaster back to life. Hunters in states now allowing straight-wall centerfire rifle cartridges for deer are flocking to the hard-hitting .450 — and not just in the AR-15: Several manufactures are offering bolt-action rifles for the Bushmaster, and they’re selling as fast as they can be made.

If you’re looking for an AR-15, the best thing you can do is consider the tasks you’ll be asking the rifle to perform. You can never really go wrong with the .223 Remington, unless you’re in a state in which it’s not permitted for big-game hunting and big-game hunting is what you want to do. If that’s the case, the 6.5 Grendel or .300 Ham’r is likely your best option.

For varmints, the .224 Valkyrie is probably the best choice, and if a straight-wall cartridge is what you need, the new .350 Legend might just be the bee’s knees. But here’s the thing: With the AR-15, you can always have multiple upper receivers, which means you can have multiple cartridges at your disposal at all times. That’s the real beauty of the AR-15. It is the most versatile and adaptable rifle ever created.

ADM Spek: A Red-Dot To Go With Their Mounts