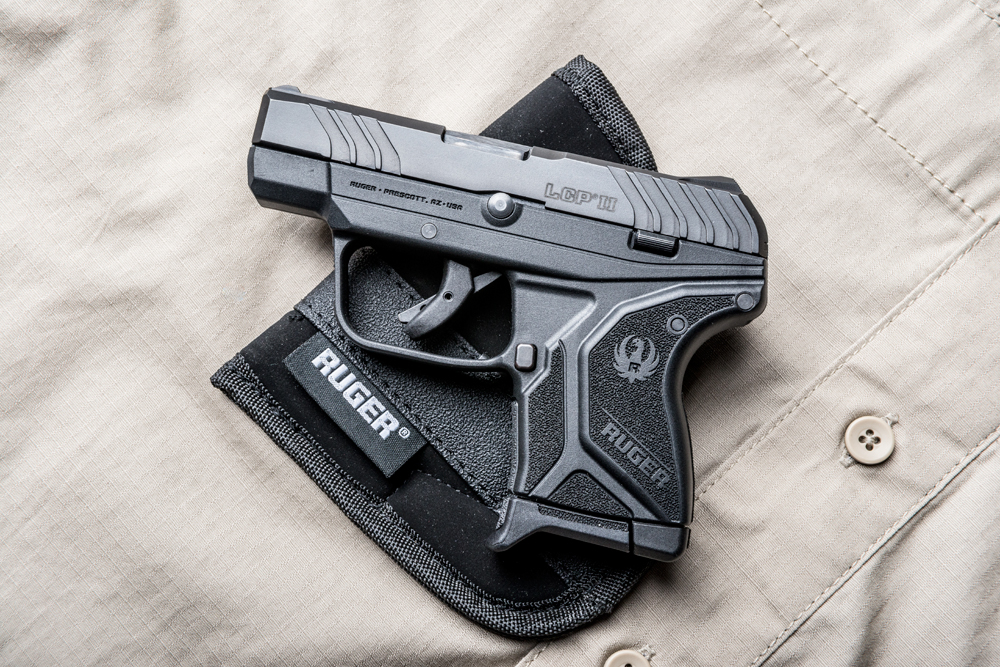 What Are The Top .380 Pistol Options For Concealed Carry:

Until the world recently started truly going to hell in a handbasket, the .380 ACP pistol was all the rage. Not that it still isn’t. Any gun is better than no gun in the past couple of years. That said, full-sized 9mms with readily available extended-capacity magazines are looking pretty dang good right now. Who cares if it prints? But I digress.

Raising the humble .380 from the dead was one main factor: ammunition. Improvements in bullet design, providing consistent penetration and expansion took what was once a marginal self-defense cartridge and made it, well … marginally better. This is to say, the debate over whether it’s a smart move to carry a .380 ACP as your primary self-defense gun is alive, well and hot as ever.

So, before we ramble on to the top .380 pistol options available today, we should hit some of the pros and cons of the demure 9mm and its handguns.

Peruse .380 pistol options and it becomes evident the caliber has a huge advantage over almost every other. They’re small, downright minuscule. Over the years, the ubiquitous 9mm has made up ground. The likes of the Sig Sauer P365’s dimensions encroaches on .380 territory. Still, this is the exception, not the rule … yet.

Since the key to concealed carry is concealing your firearms, these pocket pistols have a leg up. If you reside in a shorts and T-shirt climate, a Government Model 1911 is awfully difficult to keep under wraps. A Ruger LCP not so much. In turn, keeping a .380 pistol concealed is a somewhat easy task. However, the clandestine nature of .380 handguns isn’t the main selling point. Fostering program compliance is. In layman terms, this means a gun you’ll carry every day. Easier said than done. Though, smaller, lighter guns tend to promote diligence.

A big plus for the .380, yet, there are some less than desirable facets to the caliber and its guns that deserve thought.

The size of .380 pistols is a major advantage, but it isn’t wholly a bed of roses. By and large, small guns are difficult to shoot well. Not impossible mind you, but to become proficient with a micro .380 takes more practice than say with a Glock 17.

There are some blatant reasons for this discrepancy:

Short Sight Radius: Sight radius is the distance between the front and rear sights. The less of it there is, the more difficult it becomes to hold on a target.

Abbreviated Grip: Most .380 pistols have a small grip, both in height and circumference. In turn, the guns prove difficult to keep firm control over, particularly in faster shot sequences.

Lightweight: It sure it is nice to have a featherweight on the hip, until the time comes to pull the trigger. The lack of heft in most .380 pistols amplifies recoil. Add in the smaller grips, you’ve created a downright bucky handgun.

Low Capacity: The tradeoff for a highly concealable gun is lack of rounds on tap. Expect 6-round magazine to be the norm. 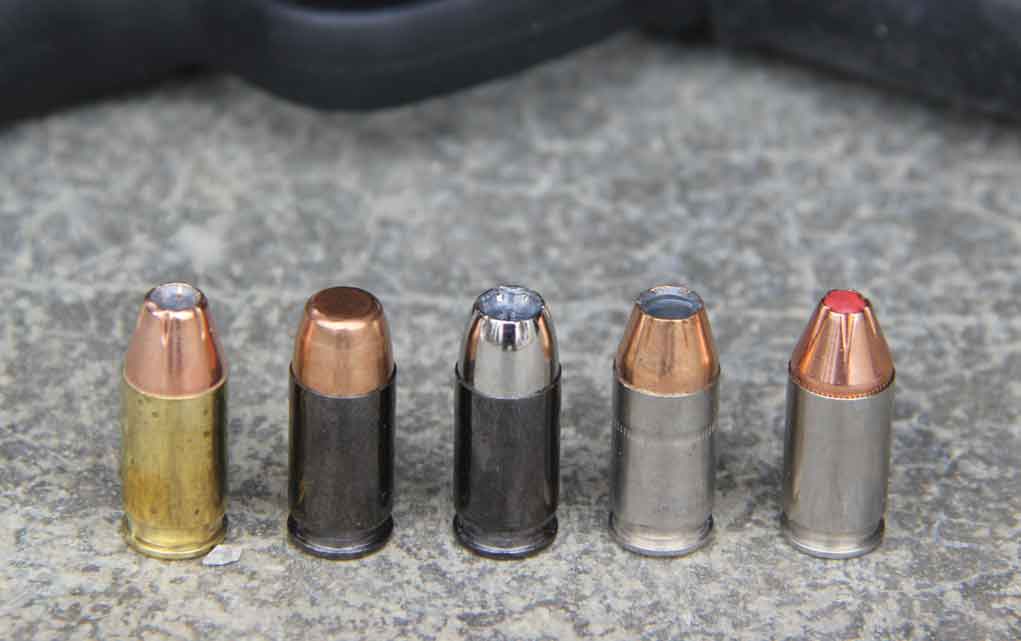 Ammunition is also a concern. While its indisputable .380 ACP has improved over the years, it still suffers from one major fault—middling velocities for the caliber. Worrisome, given velocity is the main variable dictating modern bullets' performance. Not enough of it, the projectile won’t penetrate deep enough nor expand properly, if at all.

Does this mean the .380 isn’t legitimate for self-defense? Far from it. But it does mean doing your homework on the ammunition you’ll use to guard your life. Choose carefully. Truly one of the classics, the PPK/S still holds its own in modern concealed carry. Larger than the original PPK, it’s easier to shoot and is accurate as the day is long.

At the same tick, the .380 pistol is plum concealable in every sense of the word. More suited to tote around on the hip—it is 19 ounces after all—the PPK/S can pull pocket-carry duty in a pinch.

As far as accuracy, two words sum up the pistol: dead nuts. Much of this is thanks to a fixed barrel, a feature that eliminates any barrel wiggle and makes the dashing heater a natural pointer. Though, it is a straight blowback action, which means it tends to produce stouter felt recoil. Additionally, the PPK/S has a DA/SA trigger. A good one, mind you. But you must remember that first trigger pull is a hefty 13 pounds or thereabouts.

Incidentally, now might not be a better time to get into a PPK/S. Walther once again is the exclusive manufacturer, which adds up to excellent fit, finish and quality control. 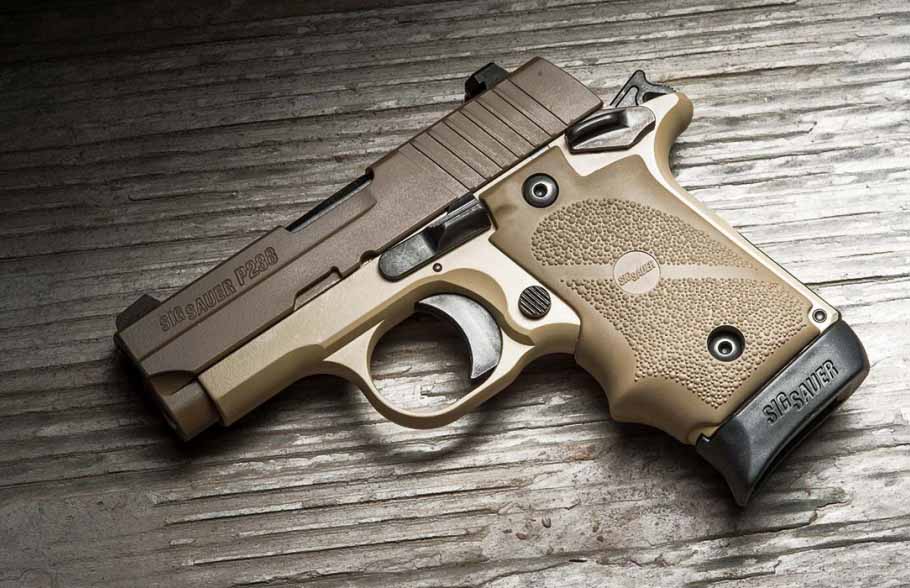 Ticking like a Swiss-made timepiece, the P238 had folks looking .380 ACP long before the cartridge regained popularity. Of course, Sig invested some sound engineering to conjure up a pocket pistol that runs like a full-size iron.

At its essence, the .380 pistol is a micro 1911 offering all the assets John M. Browning intended in perhaps his most famous design. A good example, a smashing single-action trigger that works overtime in ensuring the 2.7-inch barreled gun’s accuracy.

As far as concealability, few beat the P238. At 3.9-inches in height and 15-ounces unloaded it is legitimately a pocket pistol and would do well in this role.

Though, for some, there are sticky points to the pistol. The thumb safety is one, the cost is the other. The 6+1 capacity P238 runs on the spendier end of the spectrum. Take solace, few ever feel the pistol is a waste of money. 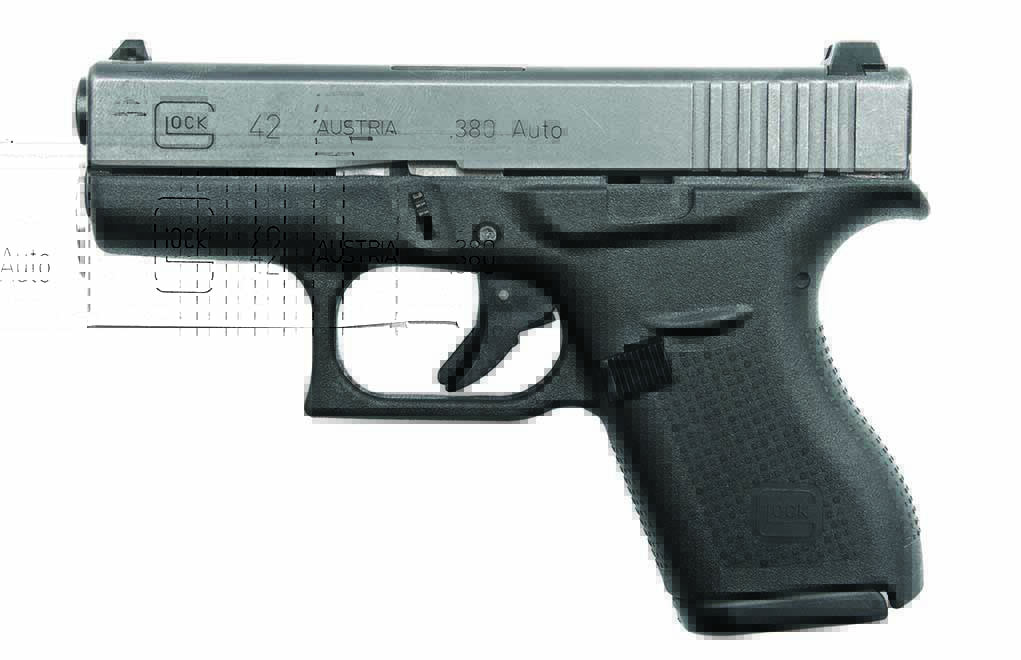 Among the most highly anticipated guns in the past decade, the G42 didn’t disappoint. Concealable, familiar and, above all, reliable, the .380 pistol ticked all the boxes of a deep-cover concealed carry piece. In short, it’s a Glock.

Admittedly, the G42 has been overshadowed in recent years by Glock’s petite 9mm offerings. But it still has a place in on-person defense. Particularly due to its shootability. It’s larger size relative to other .380s is partly to thank for this, with the gun measuring in at 4.13 inches in height and .98 inches in width.

Like most Glocks, the striker-fired has a decently crisp trigger out of the box and a short reset. In turn, those familiar with the gun can run it fast, accurately so. Though, if it or any other part of the G42 isn’t up to your standards, the Glock aftermarket is huge and the pistol upgradeable. Semi-auto pistols prove prohibitive to some. The hitch, heavy springs make manipulating the slide nearly impossible. Recognizing this issue, Smith & Wesson dealt with it head-on, deftly so, with the M&P380 Shield EZ.

Compared to a standard pistol, the .380 requires a fraction of the force to rack the slide making it accessible to a greater swath of the shooting world. Smith & Wesson accomplished the feat by breaking from the herd. Opting for an internal hammer instead of the dominate striker-fired design, the company was able to use lighter springs, thus reduce the force required to manipulate the slide. For good measure, Smith & Wesson added a few other assets, such as aggressive slide serrations and flared section at the rear of the slide.

Truly, there are few nits to pick on this 8+1 capacity .380 pistol. If you had to gripe, the oversized grip safety doesn’t win style points. Beyond that it’s a tidy and welcome concealed carry system. 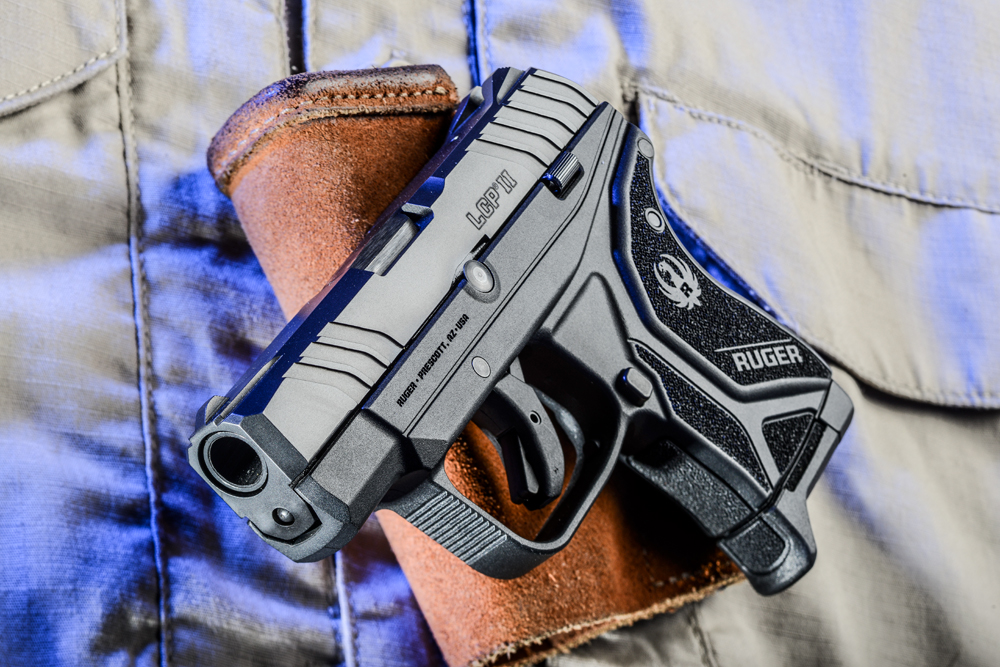 Even years after its release, the LCP II is still something to marvel at. How did Ruger squeeze so much into so little?

An improvement on the original Light Compact Pistol, the LCP II is an ideal backup or deep-carry gun. To that end, it’s plum minuscule, weighing in at a scant 10.6 ounces and measuring .75 inches in width and 3.71 inches in height. That’s small.

But the LCP is no compromise, holding 6+1 rounds and shooting like a dream. Much of this is thanks to Ruger’s improvements on the trigger, giving the double-action hammer-fired gun a single-action feel. The other part of the equation, excellent ergonomics that fit even the large mitted.

Again, this is a small gun and featherweight. In turn, many new to handguns will need time to master the LCP II. But as far as picking a piece that’s a no-brainer to carry every day, few beat Ruger’s little .380 pistol. 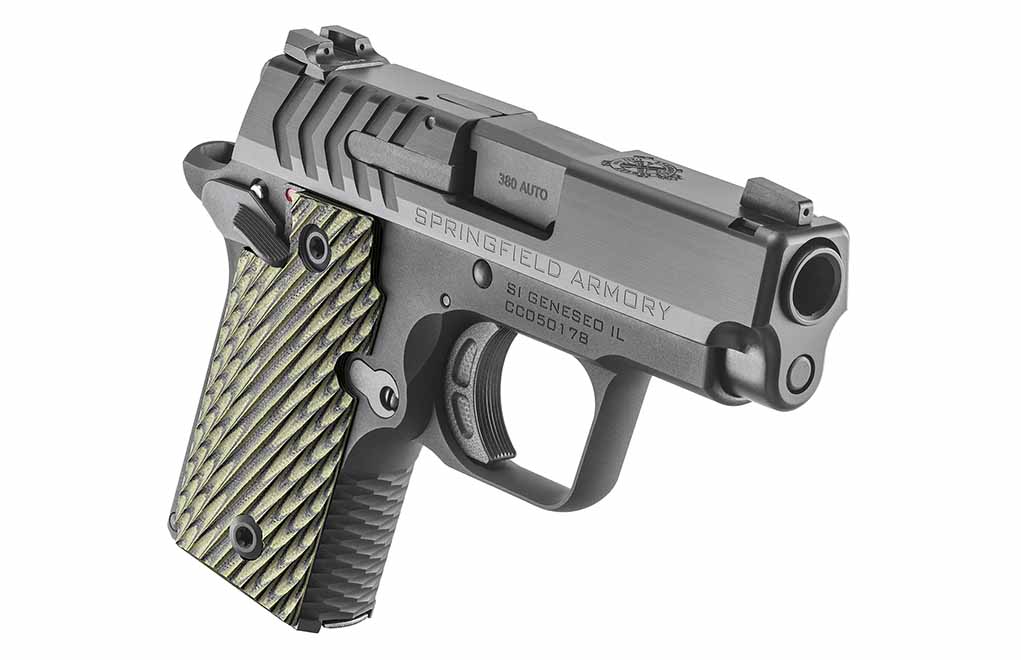 Value and performance, oftentimes it’s in an inverse relationship. Not the case with Springfield Armory’s petite, effective and, yes, dashing .380 pistol.

Before we get to the 911’s brass tacks, however, yes it does have a striking resemblance to Sig’s P238. If Springfield just knocked off the pistol and left it at that it’d be an issue. However, the company improved upon a proven design giving it legs of its own to stand on. In particular, the pistol is lighter (12.6 ounces) than the P238, arguably has better sights (Pro Glo day/night), nicer standard grips (G10) and is considerably more affordable. Not to mention, the aluminum-frame mite is fully capable of shooting the lights out.

Though, there is at least one bone to pick—the trigger. If there’s any one thing to raise eyebrows it’s the 911’s G10 switch, an effort to cut weight and costs. This isn't to say, the pull and the break aren't excellent. They are what you’d expect from a single-action of 1911 linage. Yet, for some, it just doesn’t have the same feel as cold, hard steel. A deal-breaker? No. Still, something to keep in mind if you’re finicky.