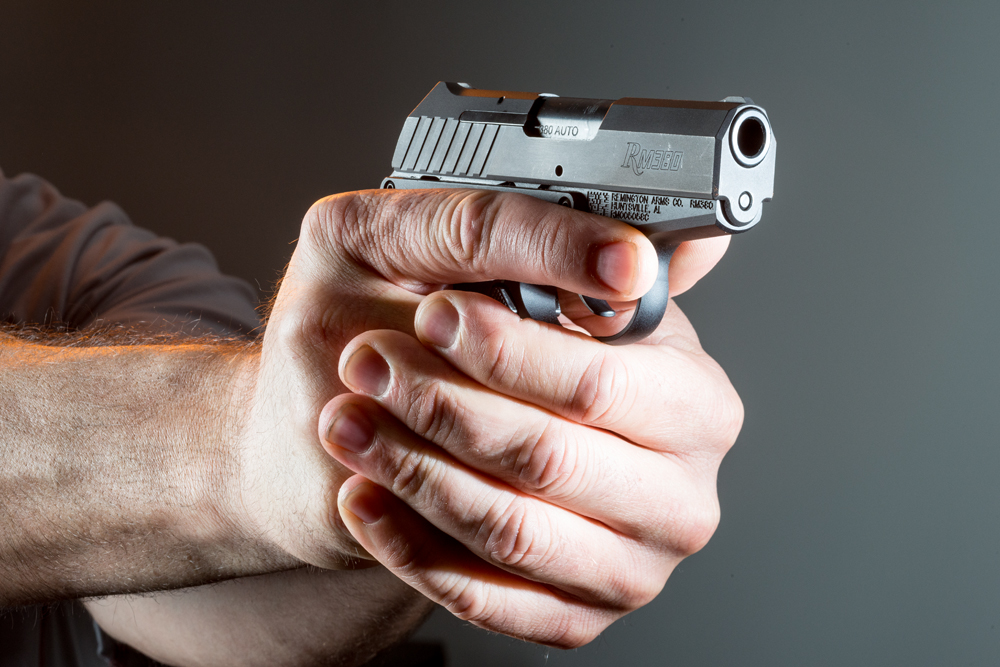 Remington’s little RM380 might be small, but it delivers plenty of performance when called upon.

I really wasn’t impressed at first. Yes, Remington staff told us their new pistol was small, a “micro,” as they called it. But when I got my first look at the new semi-automatic pistol, all I could think was: This baby boy is tiny. Palm-sized. Sure, that meant great concealability, and certainly Remington made the RM380 for the concealed carry market.

But I guess my love of the 1911 pistol has created certain biases in my thinking about handguns, like the notion that really small can’t be really effective. And then I shot the RM380—several hundred times in fact—over the next two days at the Gunsite training facility in Paulden, Arizona, in March 2015 at Remington’s early launch of this new pistol. I pretty much drilled everything I aimed to hit. Admittedly, I was shooting at close range, 10 yards and under for most of the shots, and some within just 3 yards.

My time at Gunsite let me examine those 1911 biases of mine and then begin to move beyond them. I had to admit that, just as you don’t expect a sub-compact car to run the Indy 500, the RM380 wasn’t designed as a long-range handgun capable of taking down a water buffalo at 150 yards. It is what it is: a small and very concealable handgun quite capable of quickly putting six rounds into the center mass of a target/aggressor at 10 yards or less. Seven rounds if you put one in the chamber and then slap in a fully loaded magazine.

In fact, at Gunsite my RM380 printed silver-dollar-sized groups of four and five shots at 7 yards and kill zone hits out to 15 yards, again and again.

One potential problem I saw: The RM380 I used at Gunsite was a pre-production model, not a production model a person could actually buy. Which led me to potential problem number two: Remington’s other small handgun, the R51, a 9mm sub-compact, was also a pretty decent little shooter in the pre-production phase. But when the pistol was actually released to the public in 2014 it had many, many quality control issues—so many that Remington issued a complete recall on it.

So I was interested to see what would happen with the RM380 when it went from pre-production to an actual factory-run. I was able to answer that question in October 2015 when I received a RM380 that had come right off the production line at Remington’s new facility in Huntsville, Alabama. After 100-plus rounds, using five different types of ammunition, I concluded that my production RM380 preformed as well as the pre-production model I’d used earlier. It’s a solid, accurate little handgun, very concealable, and one I plan on carrying at times when a bigger pistol just won’t fit my clothing or the situation.

There are a number of small semi-automatic carry pistols on the market today, and the majority of them are single action. Not the RM380. It’s a double-action. The trigger pull Remington rates at 10 pounds, which means you have to give the trigger a very purposeful squeeze for the hammer to come all the way back and then release. So you can pull the RM380 out of a pocket or holster with few worries about it accidently going off. This also makes the trigger pull fairly long, and some of the people who test fired the RM380 with me at Gunsite definitely didn’t like that feature. They were used to single actions, which traditionally have much lighter, easier to pull triggers (3- to 4-pound pulls). But you also have to carry them locked and loaded with the safety on.

If the RM380 looks familiar to some, that’s because the design is based on another pistol, the Rohrbaugh R9, a small semi-auto once produced by Rohrbaugh Firearms of New York. Last year, Remington bought Rohrbaugh and set about revamping the little pistol.

While keeping the basic design, Remington reworked the recoil system to make it much more durable, and added a slide stop lever and fixed front and rear sights.

Weighing in just a bit more than 12 ounces, the all-metal (minus the grips) RM380 has a 2.9-inch stainless steel barrel; the entire pistol measurers just 5.27 inches long. It has a fully functional slide stop that holds open at the last round, an ambidextrous magazine release and an extended beavertail grip.

Disassembly is very easy. Turn the RM380 at a 90-degree angle on its left side and gently pull back the slide until the takedown pin is aligned with the appropriate holes in the frame. Give it a jiggle and the takedown pin will fall out and the slide will disengage from the frame.

By the way, the takedown pin will not fall out if the RM380 is fired while being held sideways, a concern some shooters voiced when the first RM380s hit the market. The slide must be held back in place for the pin to be removed. Problems? The slide release holds back the slide fine and is recessed to avoid it snagging on clothing and gear. However, like a number of small pistols, the slide release is difficult to work when you want to actually release the slide. It’s much easier to pull back on the top of the slide to rack in a round.

The sights are small. Very small. You could argue that a .380-caliber micro need not have great sights. At micro pistol distances, you are going to be pointing and shooting, correct?

I still would like a better sight picture. Smaller caliber bullets mean bullet placement is even more important. I don’t know if Remington has plans to upgrade these sights or not, though I’d bet some manufacturer will produce an aftermarket sight or sight upgrade kit for the RM380.

Speaking of aftermarket accessories, several manufacturers are now making holsters for the RM380, both inside and outside the waistband. Crimson Trace has also made a laser sight for the pistol, the Model LG-479.

The RM380 looks to be a strong seller for Remington, especially with the $417 price tag.

Editor's Note: This article is an excerpt from the 2016 Concealed Carry Special issue of Gun Digest the Magazine.