There's no need to go full-sized in a defensive smoothbore with bullpup shotguns around. We give you six of the best to guard hearth and home.

What Are The Top Bullpup Shotguns:

Gun design is fairly rote. By that I mean, there is an excepted configuration to a particular style of firearm, which is generally adhered to. Sure, there are tweaks here and there—different grip rake or fore-end—but overall anomalies aren’t tolerated. Unless you’re talking about the bullpup.

In 1901, Thorneycroft Carbine turned gun design on its ear reconfiguring the standard rifle design in a bid to shorten the overall length of British military rifles. It certainly did the job, but proved unwieldy in almost every other respect. Given this, the bullpup design should have been just another footnote. Except as materials and mechanical design advanced, so did the feasibility of the shortened system. Now today we have quite a few choices when it comes to these odd-ducks, particularly bullpup shotguns.

If you’re unfamiliar with what’s available in this unique gun niche, we’ve gathered up five of the best bullpup shotgun options available today. But before we touch upon them, perhaps we should go over some bullpup basics.

What Is A Bullpup And Why Would I Want One?

Essentially, the bullpup—be it bullpup shotgun or bullpup rifle—is simply a design that moves the action from above the trigger to behind it. It’s as uncomplicated as that and has a profound effect on performance. At the same time, it shortens the overall length of the firearm, while maintaining its ballistic potential. It’s quite a feat when you consider it.

The easiest way to shorten the length of a firearm is to trim down the barrel. Just like that, the gun is shorter. But you potentially pay a price in ballistic performance given most cartridges (or shotgun shells) produce more velocity through a longer bore. Conversely, the bullpup ignores barrel length and shortens the system by kicking everything back a few inches.

There are pros and cons to this approach, which we go in-depth on in our piece about bullpup rifles.
But in thumbnail the ups and downs of the design are these:

Like any firearm design, the bullpup shotgun has its good and bad points. Some shooters might find it the perfect tool for their particular application. Others might chalk it up as just another useless twist to proven designs. If you don’t know where you fall but are interested in a bullpup shotgun or rifle, it’s worth doing your homework.

More than reading an article, try to find a gun range or dealer that have specimens you can test fire. Only after you’re behind the business end of a bullpup will you truly know if it’s the loyal companion you’ve been searching after.

Now onto the good stuff. 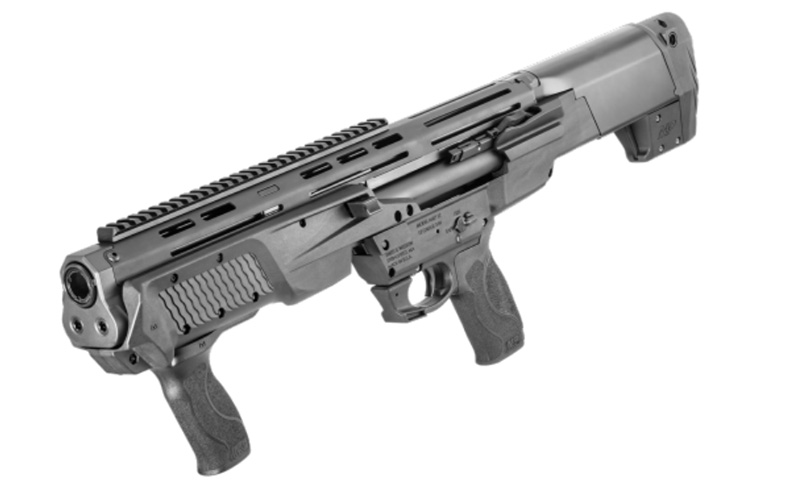 Released in 2021, this is the newest bullpup shotgun on the list, but it has a lot of promise to be one of the best, too. This pump-action 12-gauge boasts dual magazine tubes, providing a total capacity of 14+1 when loaded with 2 3/4-inch shells. The M&P 12 does feature a 3-inch chamber, however, so it can also be loaded with 12+1 3-inch shells for those who value power over capacity.

The M&P 12 also sports two pistol grips for better control, one rear and one forward on the pump, and both are modeled after the M&P pistol series which include the ability to swap backstraps according to user preference. The total package is 27.8-inches long and weighs just over eight pounds unloaded, making its heft comparable to many of the other bullpup shotguns on this list. Unlike some of the other listed models, however, the M&P 12 sports fully ambidextrous, AR-15-style controls and its muzzle is compatible with Rem Chokes.

Other features on the M&P 12 include a loaded chamber indicator, Picatinny rail for optics, M-LOK for mounting accessories and a push-button assisted loading/unloading system. That being said, the complex loading process means that you will never want to top off in the middle of a defensive scenario, so hopefully the shotgun’s generous 15-round potential capacity proves large enough to get you through the fight. 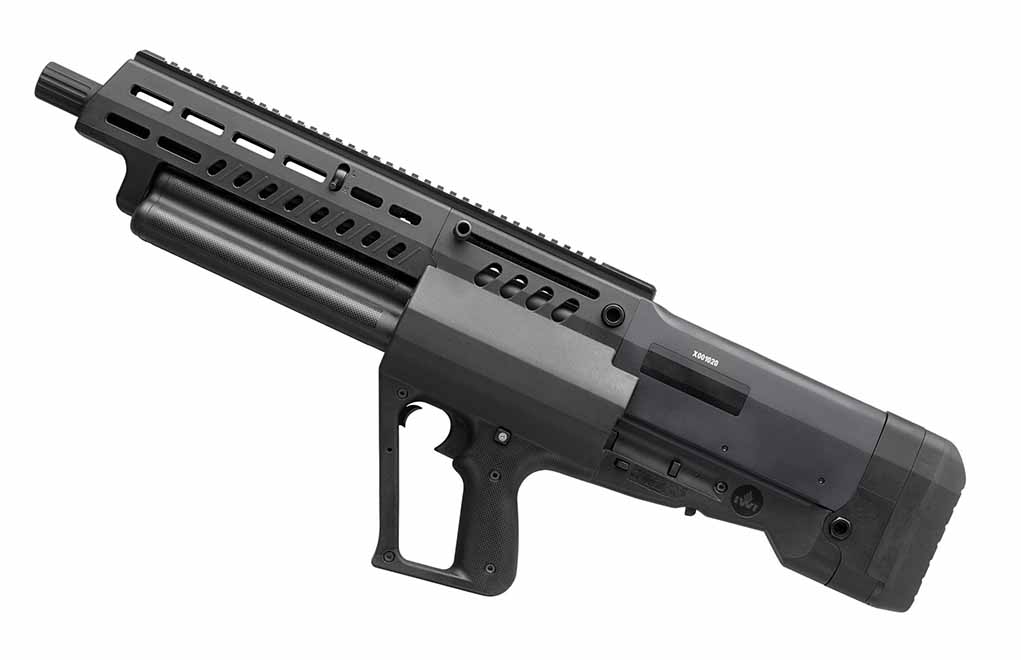 The elephant in the room is this is a mammoth bullpup shotgun. Not in length—it measures in at 28-inches (for reference, that’s 2-inches longer than a Mossberg Shockwave). But in bulk. Despite this, the TS12 is surprisingly easy to manage and pays you back for adapting to its size.

First and foremost, the gas-operated semi-automatic 12-gauge does not want in firepower. How about 15+1 shells on tap in a three-tube rotating magazine. Unfortunately, tube rotation is manual, but is a procedure that can be mastered through familiarity with the firearm. The only way to onboard more ammo is to go drum magazine, which by all accounts is as impractical as it is heavy.

IWI’s design makes for a true fighting shotgun, easy to maneuver and relatively comfortable to operate. Particularly obliging is a reversible charging handle that’s accessible and modifiable to dominant hand or shooting style.

The TS12 is astonishingly light for its size, a scant 8 pounds thanks to a polymer chassis. While you might think this adds up to more recoil in the 18.5-inch barreled bullpup, the gas-operation makes the gun rather polite. Other notables include a 3-inch chamber, M-Lok compatible rails, compatibility with Benelli/Beretta chokes and cross-bolt safety. Don’t let its size scare you away, the TS12 is a top-of-the-line defender and among the best bullpup shotguns. 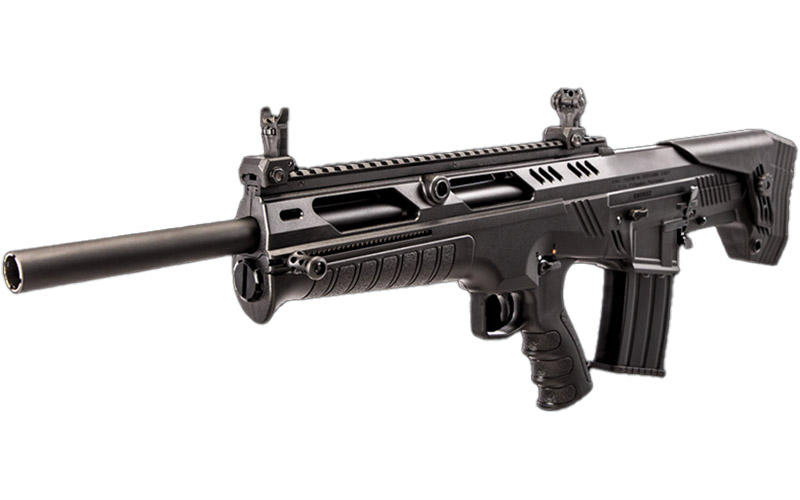 Known for its economical 1911 pistols, Rock Island Armory has made a lot of noise as of late on the shotgun front. While much of this has been accomplished in the AR-style shotgun realm, the gunmaker has expanded in bullpups with the VRBP-100. Shooters are lucky they have. The 12-gauge is a stout shooter, but inexpensive and effective.

The main draw of this bullpup shotgun is it’s a gas-operated semi-automatic, in turn, quick shot-to-shot and highly reliable. Rock Island enhances this with excellent ergonomics, particularly its Travor-esque fore-end that’s quick target to target. Furthermore, the non-reciprocating charging handle is located conveniently forward on the left-side (sorry, not reversible) making it highly intuitive to operate with your support hand. That is if you happen to be a righty.

Additionally, it feeds off 5, 9 and 19-round detachable box magazines. While bullpups are notorious for slow reloads given the mag well position, this feature at least allows you to keep plenty of ammo on hand.

The con to the VRBP-100, if you can call it that, is the shotgun is a bit long. It measures in at 28-inches in overall length, mainly due to its 20-inch barrel. The extra bore, however, balances the gun and seems to mitigate any muzzle rise, which is a plus. For the price, Rock Arms arms you well. 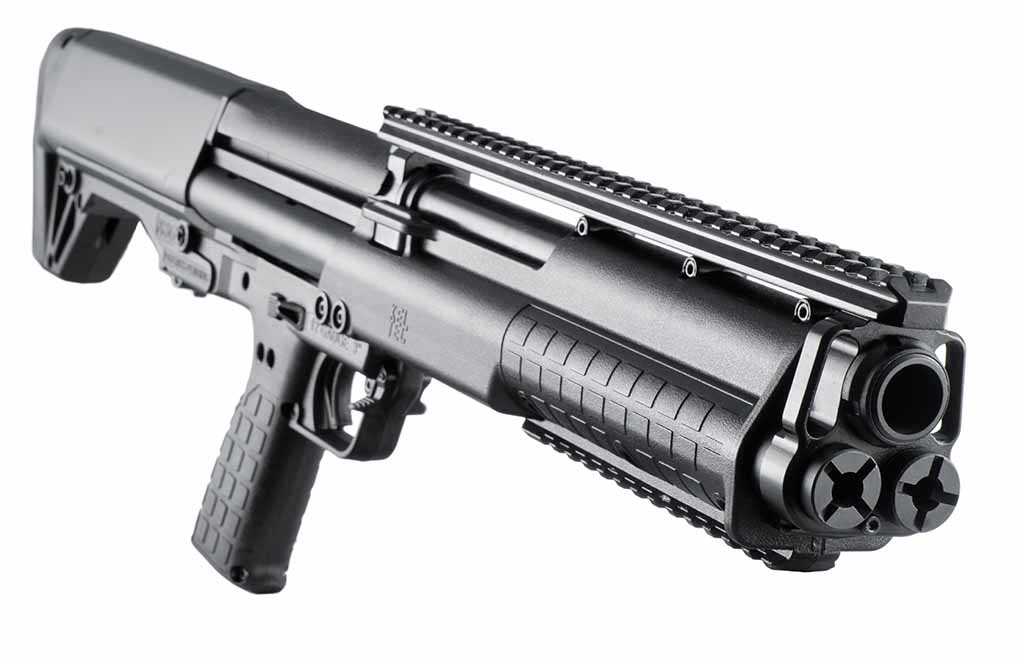 Think the bullpup shotgun is purely a semi-automatic affair? Think again. Pump-actions are perhaps the best known in this class of scatterguns, in no small part thanks to the KSG. Causing all sorts of waves—good and bad—when it first arrived, the distinctive 12-gauge really put the design on the map.

The gun’s compact 26-inch design was one of the factors lighting a fire, its capacity was the other. Twin tubular magazines give the shotgun impressive firepower, 15+1 2 ¾-inch shells 12+1 3-inch shells. More than enough ammo on tap to get most jobs done. And Kel-Tec made it easy to jump one magazine to another via a selector switch behind the grip. Perhaps more convenient, the KSG loads very similarly to a traditional pump-action, though a bottom port. Conceivably, this should make it simpler to load on the fly. As a bonus, it also makes it lefty friendly, given spent shells eject out of the same port downwards.

As to any bad correlated with the gun, it mainly had to do with feed issues early on. Much of this has been ironed out by Kel-Tec redesigning the troublesome parts. Now if it occurs, it’s generally an operator error. In particular, short-stoking the slide. The KSG is not your everyday pump-action, work the slide back hard and strong-arm it forwards and likely you won’t run into any problems. 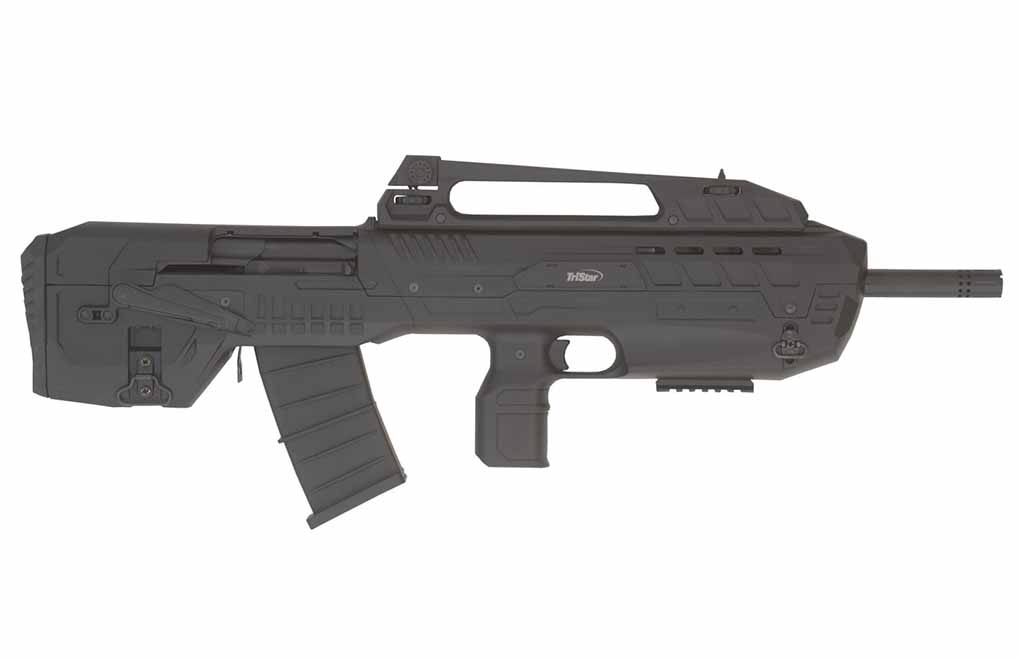 Better known for its classy and economical field and range shotguns, TriStar has also tried its hand in the tactical end of the market. The Compact Tactical is the result and offers shooters a fairly tidy package with one of the most affordable price tags on the market.

As things go, the Compact Tactical is perhaps the lest compact bullpup shotgun on the list, measuring in at 30-inches. However, this isn’t a deal-breaker. Compared to traditional 20-inch barrel 12-gauges, the semi-automatic is substantially shorter and proves plenty nimble at the shoulder. Gas-operated and 8.6-pounds, the bullpup also tends to be relatively manageable shot to shot.

Interestingly, in addition to flip-up sights, the Compact Tactical is also available with a carry handle with front and rear adjustable sights. While this is reminiscent of AR-style designs that’s where the similarity ends. The gun’s action is based on the AK-style Siaga action, in turn, it shares the same controls, including paddle magazine release, lever safety and reciprocating charging handle. For those more versed in ARs, this could throw them for a loop. But does nothing to take away from the capability of this bullpup. 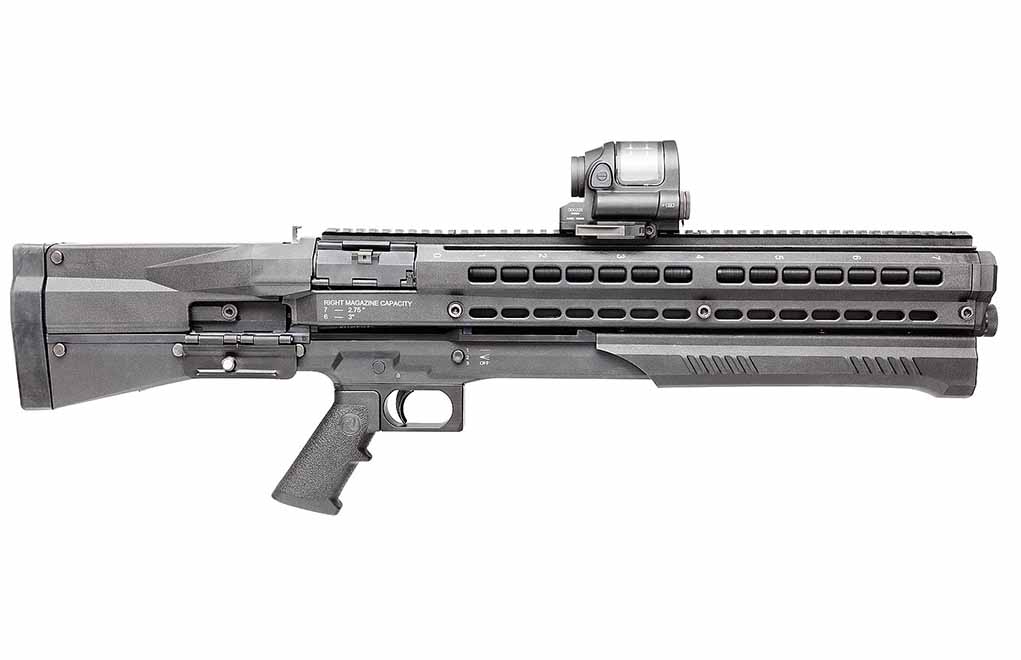 Wait, didn’t we just look at this gun? While the UTS looks very similar to the Kel-Tec KSG and is also a pump-action, the bullpup shotgun is quite different. In particular, its twin tubular magazines sit atop the barrel instead of below. Though, the gun went through comparable growing pains to its American counterpart.

Feed issues and jams were the order of the day when the UTS-15 hit the scene around a decade ago. A redesign later, UTAS has ironed out most of the bugs. Similar to the KSG, if there are problems its generally due to improper slide manipulation—you’ve got to work it!

As to its unique design, there is method in the madness—it lowers the bore axis. In turn, the shotgun’s recoil impulse is directed back into the shoulder, reducing muzzle rise and making the 12-gauge more pleasurable to shoot. It also improves the accuracy potential, particularly shot to shot. The UTS-15 certainly doesn’t want for firepower, holding 14+1 shells, but given its complex feeding system can’t be easily loaded on the fly.