To gain the full tactical advantage a shotgun offers in a self-defense situation, it takes a strategic game plan. Here are four tips to boost your tactical shotgun skills.

Shotguns have a long and successful history. The first use of the term shotgun dates back to the late 1700s. The military has used shotguns extensively. They were popular with cavalry on both sides during the War Between the States, Germany filed an official complaint against the U.S. during WWI for the use of “trench guns,” and both French and U.S. forces used shotguns in the jungles of Vietnam. Almost every law enforcement agency issues “riot guns,” although AR’s seem to be steadily replacing them. Ask homeowners what weapon they have for home protection and the answer was and usually is a shotgun. It is truly a versatile weapon, especially considering the wide variety of ammo available today. The key to shotguns is setting one up for proper home defense and having mastery of basic tactical shotgun skills to be able to use it well. 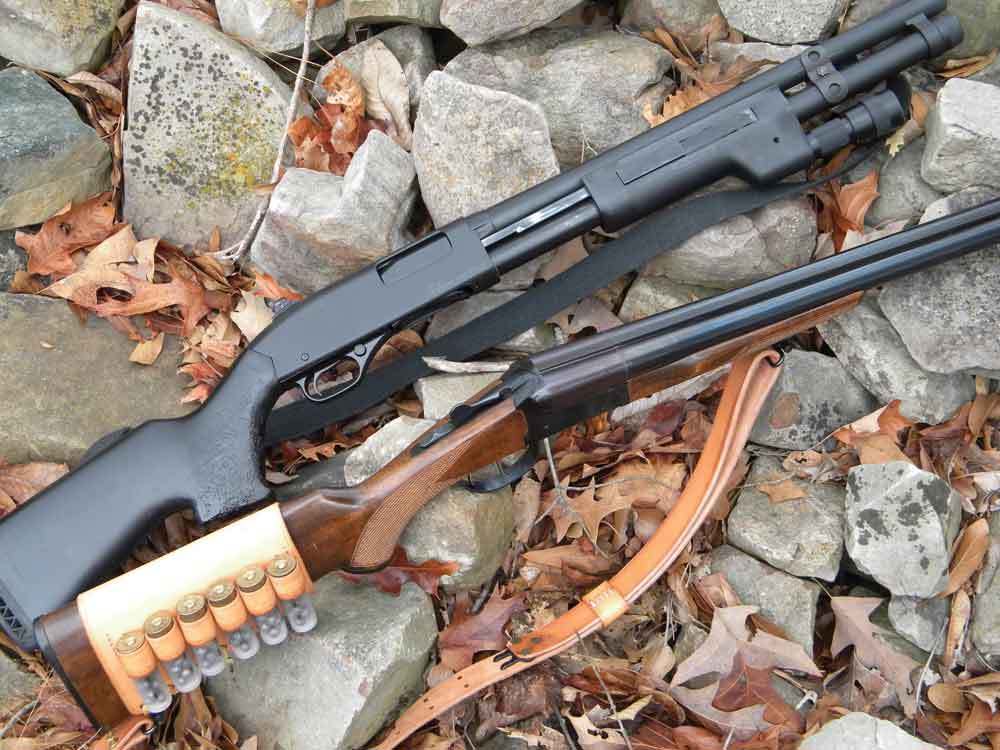 Shotguns come in all types, from single-shot and double-barrel break tops, lever, bolt and pump actions to semi- and even full-auto. The most versatile shotguns are pump actions. A lot of the semi-auto guns are ammo sensitive; a pump gun works with reduced recoil rounds, “dragon-breath” flame-throwing rounds, non-lethal rounds and, of course, standard tactical and home defense loads. Single and double barrels will also work with the various rounds; you’ll just have to learn to reload more efficiently.

Rig It For Defense When it comes to setting up your home defense shotgun, a sling is mandatory. The sling for the shotgun is like the holster for your pistol. I prefer a simple two-point sling, which can be looped around my neck for a hands-free mode. “Tactical” slings, the term I use for anything that loops around the body, have their place, just keep in mind in the middle of the night when you’re grabbing the gun there may not be time to loop it up. Practice some without having the sling looped around your body.

The standard front sight is a round bead. For fighting we need a sight that’s quick to pick up in the daylight as well as when it’s dark. Again, there are a lot of options. My favorite is the XS brand sights. They offer replacement front sights, and sets with front and rear sights. Adjustable sights are good, especially if you’re shooting slugs for accuracy. Another option is the red-dot sight, which works as well on shotguns as they do on carbines.

Equipping the shotgun with a light is a good idea. You can run a handheld light with a pistol or carbine, but operating a pump shotgun with a handheld light never works out very well. Just keep in mind that the recoil of a shotgun places a lot more stress on the light system, so do plenty of research to find out what your best option is. It’s also a good idea to carry extra ammo. I use either a butt-cuff, strapped around the stock, a side-saddle, which holds extra rounds on the side of the receiver, or both. There are a lot of other accessories for shotguns, but not everyone needs all of them. I prefer to lean toward simplicity and light weight. As you train and begin to improve your tactical shotgun skills, don’t be afraid to experiment with different parts and accessories until discovering the right combination for you.

To use a shotgun properly requires training and practice. Training is an introduction to the shotgun skills you need; practice is the repetition necessary to actually learn these skills. You start with loading, which is more complicated than most people actually think, particularly in a high-stress situation.

After that, you learn unloading without cycling the action back and forth and dumping your rounds on the ground. You’ll also learn how and why to cycle the pump action aggressively, using the elbow instead of the shoulder joint.

Racking the action correctly prevents the action bars from binding, or locking up, and “short-stroking,” which is a major cause of most shotgun malfunctions. You need to know how to clear malfunctions and most importantly how to reload. 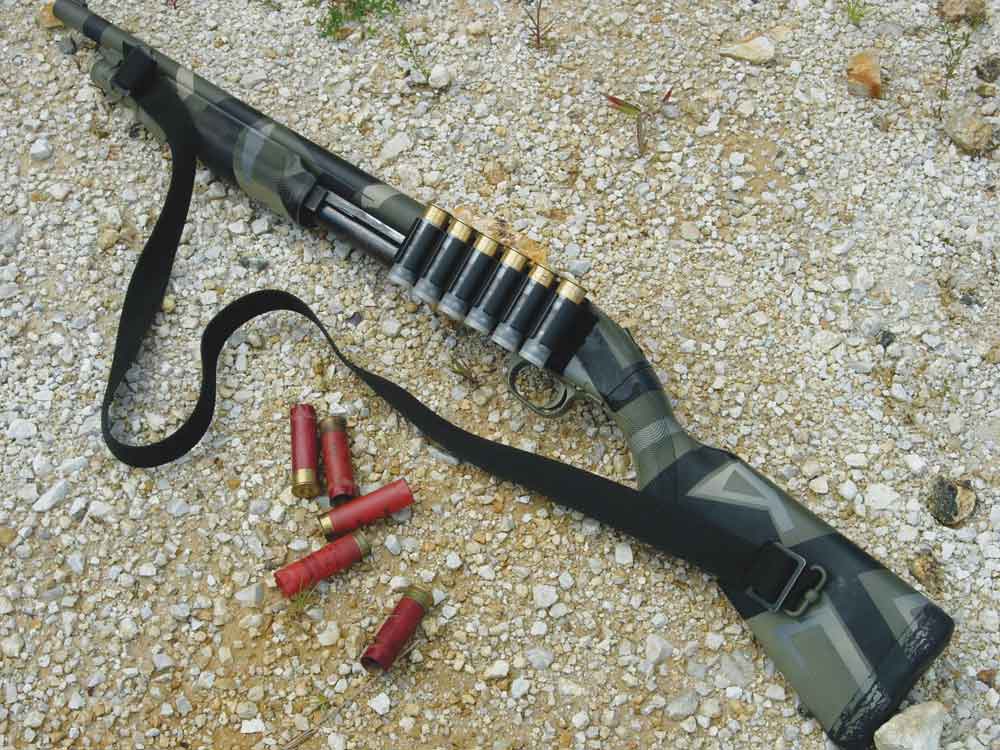 There are a variety of reloading techniques for the shotgun. The main thing to keep in mind is that you have to feed the machine. Shotguns have a limited round count, and while you shouldn’t need a lot of ammo, you never know what may be required to win the fight.

What I call a “tactical” reload, keeping the gun topped off, is a good shotgun skill to have and is easily performed. You fire two rounds, and then you feed two more fresh rounds into the magazine tube. By learning to consciously perform this task, you will ensure you never empty your shotgun.

There are a lot of names for the empty reload. The shotgun is empty, but you still need to be shooting. Basically, on a pump gun, it comes down to opening the action, shoving a shell into the port, closing the action, firing and repeating the process as necessary. This should be practiced while moving from a variety of different firing positions, and especially in the dark. The shotgun also allows you to load a different type of round during the confrontation, say switching from the buckshot in the mag tube by feeding in a slug and cycling the action to chamber it.

Choosing the right ammo is critical with the shotgun. One of the big concerns for home defense is over-penetration. Buckshot can travel through a lot of sheetrock and material until it comes to rest. Slugs can go through your house, out of it and into the neighbor’s home. Birdshot is often a much better choice. At the distances you’ll find inside your home, a healthy dose of birdshot in a tight pattern is very effective.

Once you determine the type of round you need, it’s off to the range to test and pattern. Patterning your ammo allows you to determine what brand/type of ammo works best in your gun and exactly how the round will perform at various distances. One of the common myths of a shotgun is that you just need to point it and blast away. Most beginners are amazed at how little the pattern spreads. This is especially true with modern defensive ammo that produces consistent and tight patterns. So, yes, you still have to aim the shotgun. Patterning the shotgun also provides you with data on your point of aim versus the point of impact of the shot or slugs. Should you find yourself in a unique situation and being forced to defend yourself from a threat at a great distance, it’s good to know in advance that you need to aim a little to the left to hit your target dead center.

Another point you need to consider is the shotgun’s “ready” mode. Again there are a lot of terms used, but one mode would be with it fully loaded, with a full mag tube and a round in the chamber. It’s ready for use, but one factor to consider is that a lot of shotguns have a free-floating firing pin.

Every time you load the shotgun there is a possibility of a “slam-fire,” or firing a round as the bolt chambers it. This also means that, with a round in the chamber, a sharp, sudden thump, like a car rear-ending your vehicle or hitting a large hole or speed bump can possibly cause a round to discharge from the shotgun.

Another ready mode would be having the magazine tube loaded, but with no round in the chamber. To make it ready to fire, you have to chamber a round. This takes time and must be a habit, so if this is your mode, then part of retrieving the shotgun includes chambering a round. Another factor is the noise of racking a round into the chamber.

One school of thought is that this will scare away an intruder. The other side of that coin is that it alerts the threat that you are armed, and they may choose to start firing first.

Using any firearm well is an art. The same applies to the shotgun, and maybe more so than other weapons. In some ways shotguns are simple, but then there are other aspects, such as keeping it loaded and firing under duress, that can be more complicated. These are shotgun skills that need to be mastered. Shotguns are versatile weapons, but they won’t do everything. However, with the right equipment, and plenty of training and practice, you can become a shotgun artist — a skill that will serve you well.

Does Your Shotgun Fit?

One of the first steps in selecting or outfitting a shotgun is making it fit correctly by choosing or modifying the weapon so it matches your body size. Start with the stock. To shoot and manipulate it efficiently you need the proper LOP — length of pull — which is the distance between trigger and the back of the stock. Most shotguns come with a long LOP. Most people need a short length LOP. Manufacturers offer youth models, which are about the proper size for most adults, or you can install a youth stock on a shotgun. Just watching someone firing a shotgun that doesn’t fit is a painful experience. With a long stock, you can’t seat it into the actual pocket of the shoulder. Most people end up holding it outside the pocket and on the deltoid muscle, producing pain every time they press the trigger. This leads to a big flinch with each shot and creates ugly, and unnecessary, bruising.

The proper LOP assists the shooter in becoming more accurate, in recovering from the recoil and in manipulating the weapon properly. There’s a lot of information on determining the proper LOP on the Internet, but ultimately it should be determined by what feels and works best for you.

Editor's Note: This article is an excerpt from the March 2015 issue of Gun Digest the Magazine.