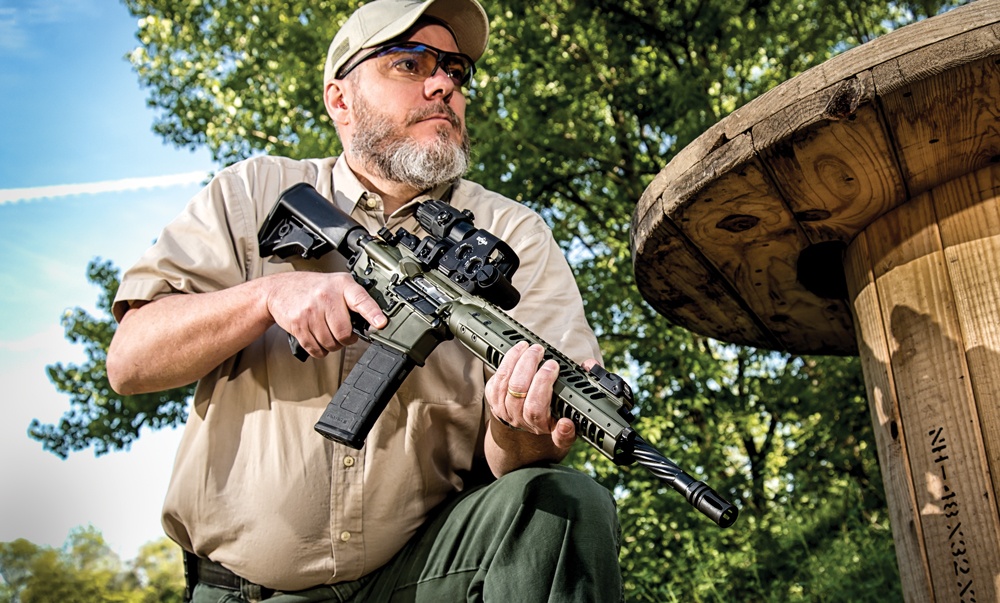 Boasting a patented short-stroke gas-piston operation, the LWRCI M6IC-A5 is a rugged-built rifle ready to answer the call of duty.

They say competition breeds innovation, which couldn’t be more true than it is for LWRC International (LWRCI). The company was founded to pursue the development of a short-stroke, gas-piston-operated firearm that would replace the M4 as the main service weapon for the U.S. Army.

One of the latest rifles from the manufacturer is the LWRCI M6IC-A5 chambered in 5.56 NATO and available in OD Green, which, like the Incredible Hulk, is a highly evolved and technologically advanced version of a Bruce-Banner-like classic, Eugene Stoner’s AR-15/M16. As with the original Individual Carbine design, the hallmark of the A5 is LWRCI’s patented short-stroke, gas-piston operation, which is designed to improve upon the original direct gas impingement system developed by Stoner in the 1950s.

The short-stroke, gas-piston system is constructed with aerospace-grade superalloys that can withstand extremely high temperatures without losing their strength or becoming fatigued. This makes the LWRCI M6IC-A5 highly reliable even in the worst conditions. Because the A5 is duty built for tip-of-the-spear military personnel around the world, durability and functionality are non-negotiable. Piston Driven
One of the known issues with the direct gas-impingement system developed by Stoner is that hot gases and carbon from the discharged cartridge are dumped into the action of the rifle where they strike the gas key, pushing the bolt carrier rearward against the buffer spring and thus cycling the action. This causes carbon buildup in the action and eventually contributes to functionality issues. If nothing else, this necessitates more regular weapon cleaning.

The beauty of the short-stroke, gas-piston operating system, however, is that gases from the spent cartridge move through the gas block where they strike a piston—the piston then drives the bolt carrier rearward while the dirty gases exit the firearm clear of the action itself. Combined with LWRCI’s nickel-boron coating and the superalloy components used in the piston system, this means the action stays cleaner, longer, thus reducing carbon buildup that leads to malfunction.

The tradeoff, of course, is that piston-operated platforms typically cost more than their direct gas-impingement counterparts. Some have pointed out that the piston system increases felt recoil, but the difference is negligible, especially with the 5.56 NATO/.223 Rem. cartridge.

For some people the increase in cost is worth it, particularly when the mission profile includes the discharge of high volumes of ammunition and minimal time for cleaning. For the warfighter, reliability is obviously paramount, and the cost is often negligible in comparison to the value gained. For the weekend shooter, the cost may not be necessary but could nonetheless be desirable. Historically, the other problem has been the way in which the piston operating system has been applied to the AR platform. Early on, several manufacturers tried to take Stoner’s design and modify it for use with a piston system, but without considering the effects this would have on components that weren’t designed for that purpose. Ultimately this led to issues like carrier tilt and damage to the lower receiver.

What LWRCI and others have done, however, is engineer the AR concept and components specifically for use with a short-stroke, gas-piston operating system. Rather than being an afterthought, the short-stroke piston operation is foundational to the LWRCI M6IC-A5.

The AR Evolved
Among the standout features on the new A5 is a machined Monoforge upper receiver with an integrated rail base that is lighter and stronger than previous two-piece designs. The rail comes pre-drilled for a host of rail segment configurations to meet the user’s needs and preferences, including the option to install a quad rail via the retaining screw holes.

The upper also eliminates the need for a standard barrel nut, and instead is secured by a proprietary non-indexing torque ring. This ring system provides even pressure around the barrel for optimal fit. Not only is the upper and rail design functional, it’s also visually appealing. Available Cerakote finishes include Flat Dark Earth (FDE), Olive Drab Green (ODG) and Patriot Brown (PBC), and then of course as Henry Ford always said, there’s black. LWRCI prides itself on providing the customer with top-tier quality parts in its firearms, according to Jeff Clemmer, vice president of product development, which is why it manufactures its cold hammer-forged barrels in house. The barrels are forged from 41V45 steel alloy and are treated with NiCorr surface conversion technology, which the company claims is more resistant to wear, heat and corrosion than hard chrome.

The LWRCI M6IC-A5 features eye-catching spiral fluting to provide a barrel that’s 20 percent lighter than those of similar diameter. The barrel is pretty damn sleek to look at, but the spiral fluting also allows the barrel to cool faster and, according to LWRCI, provides greater accuracy. Featuring a scallop-cut design on the front of the handguard, the A5 also has an easy-to-access, two-position gas block for use with or without a suppressor and includes a standard A2-style flash hider.

As a duty-built rifle, the LWRCI M6IC-A5 is fully ambidextrous, allowing the shooter to manipulate the firearm from a number of different positions and/or around, over or under barriers. This includes ambidextrous safety selector, charging handle and mag release.

The bolt and carrier group feature LWRCI’s patented nickel-alloy coating, as does the trigger unit. The nickel-alloy coating, according to the company, provides a permanently lubricated surface that never rubs off or attracts debris. Two barrel length options are available, either a 14.7- or 16.1-inch configuration, with not even half a pound of weight difference between the two. The rifle tested was the 16-inch version.

Range Tested
Accuracy testing was conducted at 100 yards from a bench with a Steiner M5Xi 3-15x50mm Military optic, while close-range target work was performed with EOTech’s HHS II EXPS2-2 with G33.STS magnifier. Velocity was measured with a Competition Electronics ProChrono chronograph from Brownells.

The first load tested was the Nosler Custom 69-grain Match Grade, which posted an average velocity of 2,507 feet per second (fps), a standard deviation of 15 fps and an extreme spread of 27 fps. The best group of the accuracy testing came with the Nosler Custom, which produced an uber-impressive group of just .254 inch. The average group was 1.28 inches. The second load tested was Hornady’s 55-grain V-MAX, which is quite typically a top performer. The 55-grain V-MAX posted a miniscule best group of .361 inch and an average group of .80 inch. The average velocity was 2,793 fps, with a standard deviation of 27 fps and an extreme spread of 49 fps.

Third and finally, HPR’s 62-grain Black Ops was tested. Packaged to perfection, the Black Ops load produced a best group of 1.38 inches and an average of 1.67 inches. The average velocity was 2,694 fps, with an extreme spread of 32 fps and a standard deviation of 21 fps. One of the main advantages with the LWRCI M6IC-A5 is that you get a highly-advanced, highly-functional, short-stroke, gas-piston operated AR right out of the box for $2,749 (MSRP). Sure, you could make similar upgrades yourself, but let’s face it — not everybody wants a do-it-yourself AR build. Even then, very few DIY builds would rival the A5.

The A5 also comes fully loaded with Magpul pistol grip and magazines, as well as a nickel-boron coating on the trigger, bolt carrier and group, and barrel. Flip-up sights come standard, while a continuous top rail provides a great number of day and night optic configurations. The rifle is also fully ambidextrous, incredibly ergonomic in design and functional to operate. Color options match an already sleek design, and you know you’re getting an aerospace-grade gun with unsurpassed longevity.

Editor's Note: This article appeared in the July 2015 issue of Gun Digest the Magazine.