Heckler & Koch didn't shoot from the hip with the HK P30SK, producing a well-balanced, high-performing subcompact, engineered to deliver when it matters most.

In the late 2000s, Heckler & Koch of Germany introduced the U.S. to its P30 semi-automatic pistol, a double-action, polymer-framed pistol with a high-capacity magazine and a revolutionary polygonal barrel. The response was overwhelmingly positive, and the P30 became a hit with American shooters who appreciated its high level of engineering and fastidious attention to detail. After all, HK’s catchphrase is Keine Kompromisse!, or “No Compromise!” for those not fluent in German.

Because the slick German semi-auto was so successful stateside, it seemed only natural that HK would target the burgeoning American concealed carry market. And it did, just not right away.

The HK P30SK (SubKompact) is a scaled-down 9mm version of the popular P30 semi-auto. Even though the P30SK simply looks like a shrunken P30, it took HK three full years of engineering and development to translate the full-sized semi-auto into a compact carry version.

The mechanics remain much the same between the two guns, but the ergonomics of the P30SK were redesigned to make this a stand-alone handgun instead of a cropped-and-chopped version of another model. The SK shares the same basic DNA as its alterer bruder, including a single-action/double-action design with large ambidextrous slide stop levers, luminescent three-dot sights and a polymer frame with a nitro-carburized steel slide with a corrosion-resistant blued finish, but with a much more compact design that makes it a great choice for concealed carry.

While striker-fired guns are all the rage, including HK’s own VP9 and VP40, double-action semi-autos such as the P30SK still have a loyal following and still make perfect sense as a concealed carry gun. The double-action trigger pull is heavy — about 12 pounds — but it’s smooth, and it’s easy to pull this gun from a concealed holster and fire the first shot quickly and accurately. Subsequent shots feature a much lighter 5.5-pound single-action trigger pull with modest take-up and a crisp, clean break.

Most shooters don’t really appreciate how good or bad a trigger pull really is until they begin firing shots from a sandbag on the range. Bad triggers make this a real chore because they are heavy and creepy, never offering a clean snap. The team at HK did a great job on the trigger with this gun, and after a few shots off the bags I could predictably take up the slack in the trigger, press evenly and count on being surprised at the shot. The trigger pad is also very wide and comfortable. The P30SK grip geometry is excellent. It features a textured side and rear panels that are neither slick nor so aggressive they hurt the shooter’s hand. The cross-directional texturing keeps the gun firmly planted in your paw, and the P30SK, like the P30 before it, features interchangeable rear and side panels.

Each new gun comes with three different backstraps and three different sets of side panels, so when HK claims this gun offers a perfect fit, it means it. Removing the rear and side inserts requires the use of a punch and a hammer, but once the pin is free you can mix and match component parts until you find the perfect combination.

The P30SK is available with or without a manual safety, which is understandable. Some shooters vehemently support carrying guns with no manual safety, while the other camp is equally dedicated to manual-safety-only guns.

No matter which doctrine you follow, there’s a P30SK for you. Both versions come with hammer and firing pin safeties but no magazine disconnect, so you can fire the gun without the mag in place. There’s also a special Law Enforcement Modification (LEM) model that comes with a bobbed hammer and a double-action-only (DAO) trigger with a crisp 5.4-pound pull. If you haven’t shot the HK P30 line of pistols, you will have to familiarize yourself with the location of some of the controls. The extended ambidextrous slide release is mounted along the top of the frame just below the chamber.

It’s not a traditional American styling, but it serves a very important function — when the gun is holstered, it’s impossible for an assailant to drop the magazine from your firearm. And once you become familiar and comfortable with the system, you’re probably going to like it. When the mag runs dry, simply press down on the paddle with your trigger finger, drop the magazine and reload. The system is fast and intuitive.

The P30SK has a decocker, but just like the magazine release, it isn’t in the traditional position. Instead, it is located just to the left of the hammer. This too serves a very important function.

When you are clearing the gun in the middle of a gunfight, you won’t accidentally hit the decocker since it’s tucked out of the way. Simply press the button and the hammer drops, and, as with the magazine release lever, it becomes second nature once you do it a few times.

Some pistols look and feel cheap. Others feel like they are well-built and robust, and there are a handful of pistols that feel like they are so solidly constructed you could wither away on the range trying to get them to fail. The P30SK is that third kind of pistol. It is made of quality parts that are well machined and so tightly fitted that it feels like a custom gun. The interior parts are polished free from machine marks. The slide is tight and smooth, and the slide/frame fit is precise.

On the range, the P30SK performed very well. This is likely due in part to the barrel’s polygonal rifling, which substitutes the standard lands and grooves for a bore that has been octagonally reamed for a better gas seal. The P30SK comes with front and rear adjustable three-dot luminescent sights that are dovetailed into the slide, ideal for close-range work. 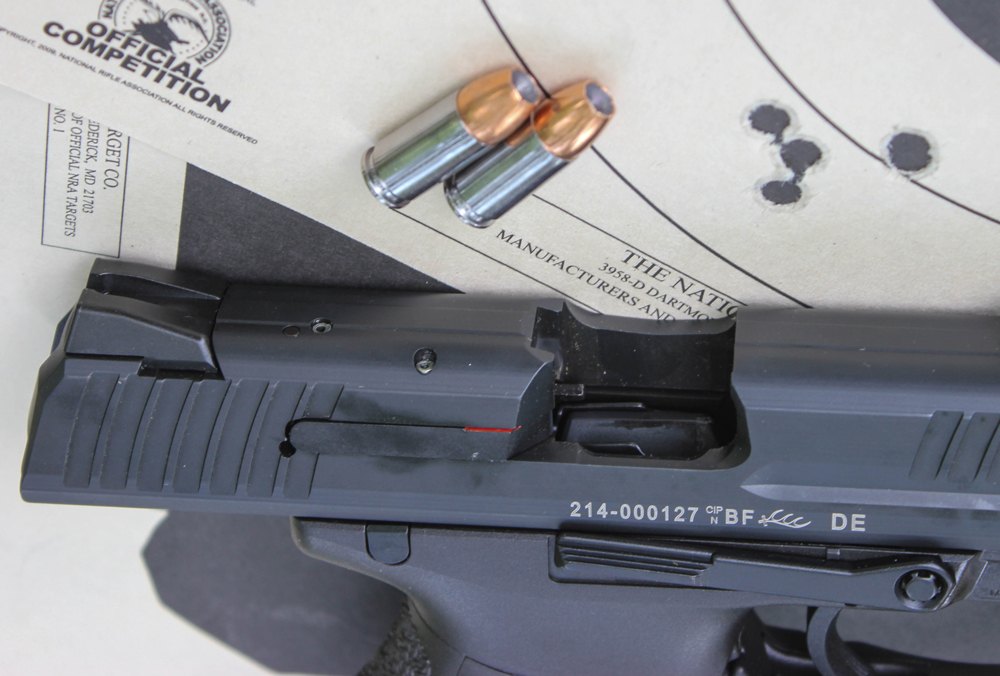 For the 15-yard accuracy test, I mounted a Crimson Trace Rail Master green laser on the P30SK accessory rail. The green laser offers a more precise aiming point, giving a clear picture of a handgun’s overall accuracy potential without variations due to sight design. With the laser in place, the P30SK was extremely accurate. At 15 yards, groups hovered just above an inch.

Normally, during these range tests you have one brand of ammo that is a clear favorite, but after testing three different loads — Hornady’s 100-grain Critical Defense Lite, SIG Sauer’s 124-grain Performance Elite and Nosler’s new 124-grain Defense — I realized I would have to measure the groups to have an idea which ammo was the most accurate in the P30SK. As it turned out, the SIG won the day, but both the Nosler and Hornady ammunition were nipping right at its heels.

The oversized extractor worked perfectly, and the only ammunition with which the P30SK took issue was the light Hornady load, which resulted in a couple stovepipe jams. This is likely due to the fact that the Hornady ammo is loaded to produce less recoil, and the P30SK hadn’t been properly broken in.

I set the Hornady ammo aside, test-fired the heavier stuff, and then went back to the Hornady ammo. After that, there was only one stovepipe, which seems to be a sign that once the HK is broken in it will work with lighter loads.

The accuracy results from the test can be found above, showing the outcomes of the test with all three ammo types. As you can see, the accuracy was very good, especially for a gun with a 3.27-inch barrel. Chances are you’ll never need to shoot a 1-inch group at 15 yards with your P30SK, but if the need arises, this gun will do it. The P30SK performs as well on the line as it does on the bench. It is balanced well and comfortable to shoot, and with an overall length of just 6.42 inches and a height of 4.57 inches, it is indeed compact.

It’s a bit wider than many competing carry 9mms at 1.37 inches, but that third of an inch of width helps keep this gun planted during shooting, and it’s still an easy gun to conceal. The abbreviated grip leaves the average shooter’s last finger without a home, but the P30SK is still manageable.

Semi-autos have gotten easier to disassemble for routine maintenance and cleaning, and HK is not the type of company to allow itself to be out-engineered. As a result, takedown of the P30SK is extremely simple.

You drop the magazine and clear the gun, pull the slide back far enough that the rectangular cutout in the metal slide is aligned with a matching piece on the slide stop, press a pin from the opposite side until the rectangular metal piece slips through the gap in the slide and then turn the gun upside down and pull the slide forward. With the slide removed, the guide spring and barrel simply fall into your hand.

It’s about as simple a takedown regiment as you’ll find on a compact semi-auto, and once you’ve practiced, it will take you far less time to actually break down your gun than it has taken me to explain the process. There goes your last excuse for having a dirty pistol.

HK resisted the urge to cut down their P30 pistol to grab a share of the compact pistol market because that meant cutting corners. Instead, the company has taken the time to produce a well-engineered, well-designed carry gun that is built to last.

Will the newer VP9 and VP40 spawn similar compact carry variations? (Editor's Note: Indeed they have, as is evident with HK's recent introduction of the new VP9SK). I’d venture to say it’s likely, but it’s not absolutely necessary, because the P30SK is a fine carry gun that lives up to the HK name and commitment: Never compromise.

Editor's Note: This article appeared in the August 2015 issue of Gun Digest the Magazine.