Magnum Research has delivered a winner with its recent Baby Desert Eagle III in 9mm. It's a rugged, steel-frame gun that proved both accurate and reliable.

Having previously had an opportunity to put the .40-caliber polymer-framed version of the Baby Desert Eagle through its paces early in 2016, when an all-steel version of this pistol in 9mm showed up unexpectedly, I didn’t waste time gathering ammunition and heading to the range. After all, here was a rare opportunity to test two versions of the same pistol, in different calibers, just to see how well they stacked up to one another — and the publicity. What might have been a boring experience the second time around was actually rather revealing.

Magnum Research, owned by Kahr Arms, imports the Baby Desert Eagle. The gun is no lightweight, hitting the scale at 38.6 ounces (unloaded). Out of the box, it feels a bit heavy, but it is a stout pistol that gives the immediate impression that it won’t break when the going gets tough. 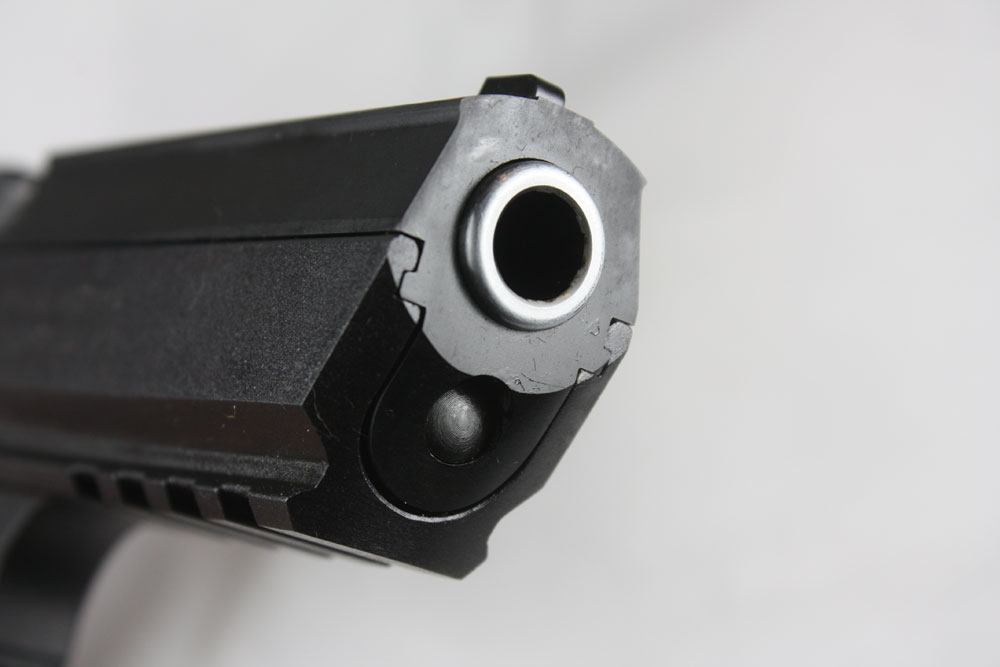 This pistol has a 4.52-inch barrel, and it comes with either two 10- or 15-round magazines, depending upon the jurisdiction. My test piece had the 15-rounders, and both feature steel bodies with bright red synthetic followers and black synthetic floorplates. They can be disassembled easily for cleaning. The steel frame in this double/single-action pistol features an integral accessory rail ahead of the trigger guard. The thin polymer grip panels are held in place with a single screw, and they are textured on the rear for a firm hold. The front strap is grooved to enhance the grip, and the squared trigger guard has grooves and is sized large enough for use while wearing gloves.

The rear of the frame features an ample beavertail that some might suggest is a bit long. In my opinion, this absolutely precludes the possibility of the slide biting your gun hand during a cycle, and anybody who has ever suffered such a pinch will appreciate that.

For all intents and purposes, this Baby Desert Eagle version is a “Desert Eagle” in name only. While visually similar to the original legendary pistol, when you tear it apart, it is a rather conventional semi-auto internally, and it spits out lead with the best of them. 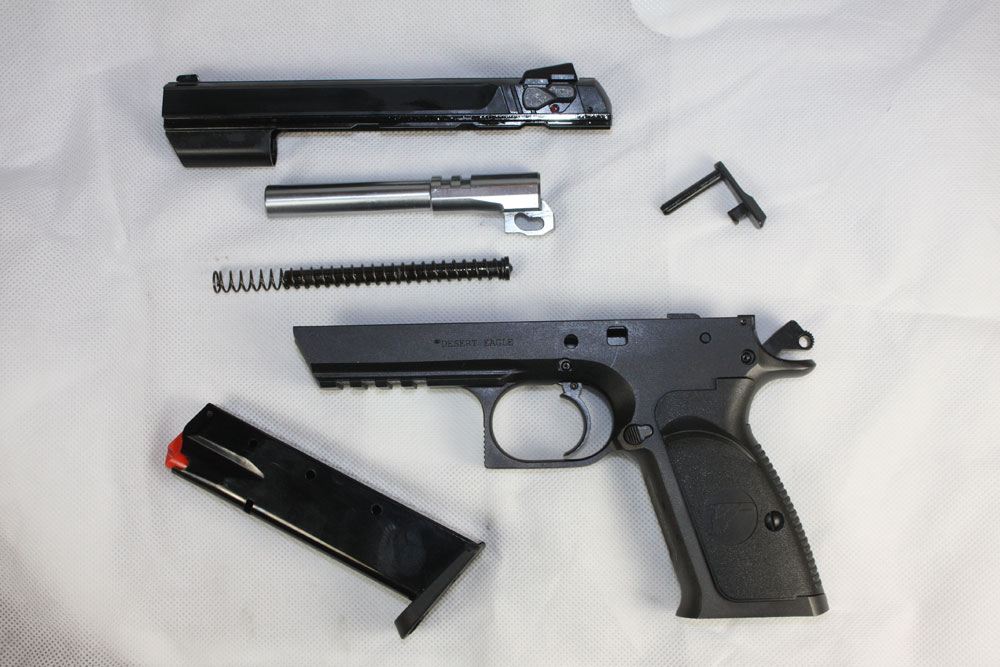 Takedown is remarkably simple. Pair two small dots at the rear of the slide and frame, pop out the slide stop/release (right to left) and the slide and barrel come forward off the frame. The barrel can then be removed for a full cleaning. It all goes back together by reversing the steps.

I will say this up front: Be sure to clean the shipping oils from the rails and other surfaces, and add a good lubricant to the rails before shooting. Ditto, add a couple of drops of oil to the full-length recoil spring guide. I had a single malfunction on the third shot that was my fault for simply giving the gun a good surface wipe without making sure the rails and guide rod were properly lubed, but a drop or two of Outers gun oil had it running like a sports car in short order with both FMJ and JHP rounds from Black Hills, SIG Sauer and Browning. Fitted with low profile three-dot sights dovetailed on the front and rear of the slide, my test pistol shot a bit low at 10 and 25 yards, but not so much that I worried about how it might perform in a gunfight. It’s worth noting that my earlier experience with the polymer-framed model also saw it shooting a bit low.

My groups, fired from a sandbag rest, were fairly consistent with the exception of a flyer here and there, regardless of the bullet weight and type. The pistol seemed to like 124-grain bullets best, although I did get some decent results with Browning’s heavier practice and street ammunition.

Thanks to its weight, the recoil of the 9mm ammunition was easily manageable. And some of that ammunition was pretty zippy. The hottest load out of this pistol was the 115-grain SIG Sauer FMJ, averaging 1,248 fps, and right behind it was the 124-grain Black Hills JHP crossing the screens at an average of 1,239 fps. The 115-grain SIG JHP moved out at 1,210 fps, and the 124-grain SIG JHP left the muzzle at 1,178 fps. Browning’s 147-grain BPX JHP clocked in at 1,076 fps, while the Browning 147-grain FMJ moved out slightly faster at 1,094 fps. That’s going to get anyone’s undivided attention. 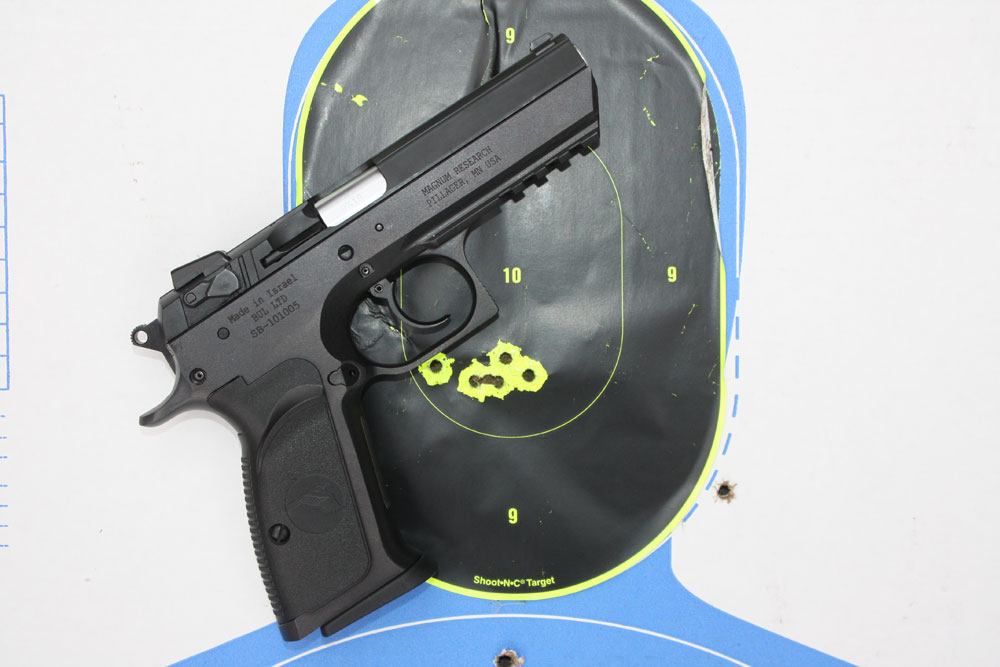 At 12 yards, all of these rounds grouped within 2½ inches, and while I was shooting, I focused my attention on some chunks of broken clay targets at the 25 yard line, and either broke them smaller or came close enough to put the hurt on a larger target.

While I found the double-action trigger squeeze to be a bit of a stretch in my average-sized hand, once the pistol went to single action, it was far more comfortable. There was a bit of creep, but once I got used to it, it really didn’t affect marksmanship. 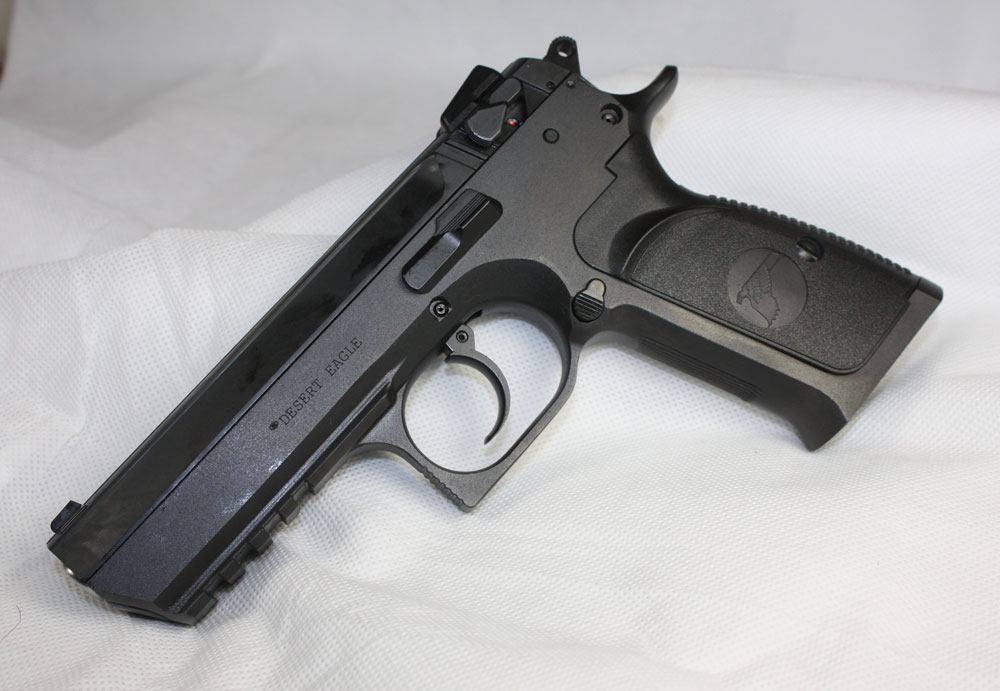 Like many 9mm pistols that seem to be based on the inside-the-frame CZ 75 design, the Baby Desert Eagle has a slide-mounted decocker/safety that is positioned where the rear cocking serrations are located. This makes for a bit of an awkward cycling of the slide, but one gets used to it. The pistol functions when the lever is in the “up” position, and it is safe with the lever down.

Though not as light as its polymer-framed sibling, the all-steel model in 9mm is a comfortable shooter, and for someone looking for a tough, full-size pistol of modern design in that caliber, this one might be a good choice. It may take some handgunners a bit of getting used to, but at the end of the day, this import will seem right at home.

Editor's Note: This article is an excerpt from the Summer 2017 issue of Gun Digest the Magazine.