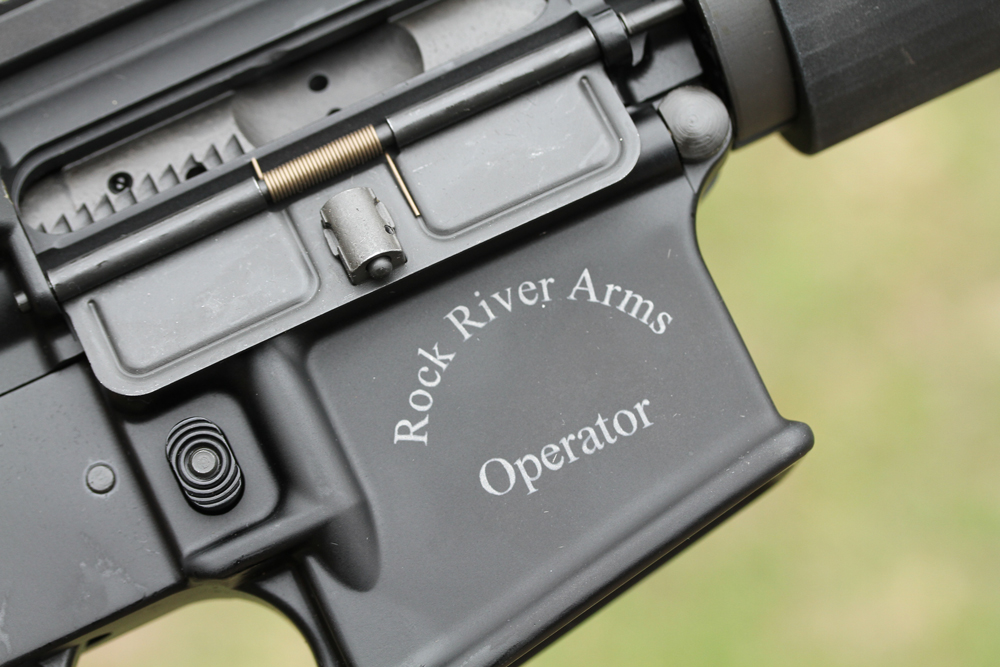 The Rock River Arms Elite Operator is a tele-stocked carbine in 5.56. The stock is a close-appearing copy of the mondo-expensive SOPMOD stock that your tax dollars buy by the truckload.

OK, I have to ‘fess up on this one. The ads you’ve been seeing for the Rock River Arms Elite Operator series? That’s due to me. Well, due to me and a couple other of my gun writer compatriots. You see, at an industry gathering where Rock River was showing us the parts and pieces that would go into the new series of rifles, they came up with an idea: name the gun. So, we dutifully took the forms, scrawled our names on them, and jotted down a few ideas for names. I have to confess I wasn’t really in the naming frame of mind. Perhaps I’d had too much coffee.

Or perhaps I was just itching to get out to the range and actually, you know, shoot guns. I put down all the tongue-in-cheek names I could think of, along with a few obvious satirical ones (there’s a reason some PR people groan when I walk into a room) and to finish it off I added a few that might actually be useful. I’m surprised they didn’t just toss my list when they saw my name.

And yes, being a gun writer can be (but isn’t always) just as much fun as you think it is.

You guessed it; Operator was one of the last ones I scribbled down. Now, I can’t take full credit for this, as two other writers came up with the same name. Soon afterwards we had rifles to inspect and test. I opted to test the top of the line model, the Elite Operator. The other two are the Entry Operator and the Tactical Operator.

Rock River Arms is located on the western edge of Illinois, right near the Quad Cities area, a location known for its manufacturing capacity in times past, and when rational people ran the country the region was well-thought of as a cradle of manufacturing and arms industry. Rock River also used to make semi-custom and custom 1911s, but when the AR-15 market exploded they set aside all the 1911 tools to concentrate on the product of the age: the AR-15. I had a chance to visit them just as they were transitioning to making just ARs, and it was sad to see the last of the 1911s being worked on, knowing there would be not more for a while.

The Elite Operator (or to give it its full title: the RRA LAR-15 Elite Operator) is a tele-stocked carbine in 5.56. The stock is a close-appearing copy of the mondo-expensive SOPMOD stock that your tax dollars buy by the truckload. At more than $100 less in cost than the USGI SOPMOD stock (and a complete assembly, at that) the Rock River stock is more than just a good deal.

It has six positions, and instead of the two battery compartments being opened on the front, with an o-ring to keep them sealed, the two compartments on the Operator stock are hidden. First, you use the push button to unlatch the buttplate, and slide it down, then you pry the two o-ring sealed covers off. They are large enough to grasp, and thus you can really shove them in for a good seal. As a bonus, if you lose the o-ring covers, the buttplate will still keep your stuff in the tubes, albeit without the waterproof seal.
The stock is well-shaped to provide a good cheeckrest, and it slides back and forth smoothly and clocks solidly in place. Plus it doesn’t rattle or wobble.

The Operator series also come with an ERGOgrip, a rubber pistol grip that replicates the shape of the MP5 grip. A lot of people like it. As with a lot of the options on an AR, it can be a very personal thing. When I first saw them, I started out liking the ERGOgrip but have come to find it not suited to my shooting style. If it works for you, good – get it or keep it. If not, it is easy enough to change. A lot of rifles come with this grip, so I have to assume that a lot of you like it.

All the Operator series come with a 5.56 chamber, a forged A4 upper, a 16-inch chrome-moly steel barrel, chrome plated, with a twist of 1:9. The barrel is capped with an RRA tactical muzzle brake, an item I find useful on a competition range but much less so for defensive use. Especially in any kind of teamwork, a muzzle brake makes your shooting easier by dumping hot gases to the side, where your teammate may well be. But muzzle devices are easy enough to change, and if I don’t get too many complaints from the guys on the line at the next LEO class, I might leave it on for a while.

They also all come with the RRA Star safety, an ambi safety that has a raised, acorn-shaped knob on it. I’m going to have to take the grinder to the right-side acorn, as it rides right underneath my trigger finger. Now, this is not just a personal matter, but a very peculiar quirk of my shooting style. I choke up with my shooting hand very high on a pistol grip. So high that my trigger finger is actually coming down to the trigger on an AR. As a result, I find most ambi safeties on an AR, regardless of the design, to be problematic. This is no slam against Rock River, and in fact their design is less objectionable to my hand than many others. You may not have a problem, and in fact, a lot of the officers in our classes really, really like the Rock River design.

Inside the Operator series is the Rock River two-stage trigger. As a competition trigger, it is great. As a duty trigger, especially if your sidearm happens to have a heavier, longer trigger pull, then the mis-match can be a source of friction. As I spend a lot of time with heavier, mil-spec triggers, I’ll probably get inside and actually increase the trigger pull of the operator, just so it is more like the sidearm I’ll have on.

Last up, but very important, they all have the current USGI front sidemount sling swivel, attached between the legs of the front sight assembly. All three have a fixed, normal front sight tower.

They all come in a case, with two magazines, manual, and warranty.

The Elite Operator differs from the other two in having a special handguard; the Entry and Tactical have M4-type plastic handguards. (The Entry and Tactical differ from each other in the barrel; the Entry has an M4-style profile, while the tactical has a lighter barrel, shaving a bit over half a pound from the full-up weight.) The Elite handguard is a free-floated aluminum handguard with rails on the cardinal points, but rails that are only half the length of the handguard. Most users don’t need rails that go all the way back, so why make them that way?

As a final lagniappe, Rock River knows that what the end-user needs are options and extras. So when the Operators rolled out, they came with some very nice extras. You could have your choice of one-inch or 30mm scope rings, a one-piece unit that clamps right onto the top rail of the receiver. And you got to pick from four different BUIS/handle setups, from a regular A2 handle and sight to the RRA tactical handle, the Dominator2 that allows you to put a red-dot on the removable rail/BUIS, and a plain old RRA standalone sight that would be an entirely serviceable sight all on its own.

Now, the bonus items may well have been changed, dropped or modified by the time you get this book, so don’t go hounding Rock River for the extras that “Sweeney promised me.”

How does it shoot? Nice would be a word to use. Accurate would be another. An eight-pound (before sights and ammo) AR carbine in 5.56 doesn’t exactly smack you in the chops every time it goes off, and the muzzle brake does a lot to remove what little steam there might be in the recoil. The trigger is clean and crisp, and has a short re-set (for those who care about re-set), so shooting quick pairs or follow-up shots is no problem at all. As with all aluminum handguards, if you shoot a lot, quickly, you’re going to heat up the handguard. So it would be best (if you’re a “heavy on the trigger” shooter) to have a set of nomex gloves in your shooting gear, just in case.

Also, the black aluminum will absorb heat from the sun, so if you live in a desert or desert-like area, you’ll want to be careful picking it out of the rack. But that is not a feature unique to the Elite Operator; all aluminum-handguard rifles have that predicament.

The 1:9 twist is plenty good enough for all bullets up to 68 grains, and like the rest, it may or may not like a particular 75- or 77-grain load. Only testing will tell, and I’m not worried. It isn’t like I have a garage full of cartons of Mk262 Mod 1 ammo. It shoots just fine with M855 green tip, so I’m set.

If you like the RRA half-quad aluminum free-floated handguard (that’s what it is called, off of the Elite) you can get one from Rock River. It is a standard stocking item, and they’d be pleased as punch to send you one. You can even get it with the top rail full-length, just in case you want to mount something that can’t or won’t fit onto just a partial upper rail.

The shipping box is a real bonus. A hard case with latches on three sides (hinge on the other), it takes the rifle in its assembled form. You can have it in the case, ready to go (well, not loaded, that would be stupid) and won’t have to slap the two halves together once you’ve opened the case. While it might not survive being run over by a vehicle (and then again, it might) the case will certainly protect your Rock River Operator from normal abuse: dropping, falling off benches, getting kicked across the room by your clumsy buddies, etc.

Did I send this one back? Are you crazy? After all, I named the thing. Now go out there and buy one for yourself, so Rock River thinks I actually knew what I was doing.

This article is an excerpt from The Gun Digest Book of the AR-15 Vol. III.