In the .22 WMR vs .22 LR debate, it’s difficult to claim the rimfire king has been dethroned. The .22LR remains the top choice for all but a few niche applications.

Certainly, side-by-siding the .22 Winchester Magnum Rimfire (.22 WMR) and .22 Long Rifle (.22 LR) isn’t akin to, say, comparing the .45-70 Government and .38 Special. No, indeed the popular rimfires are much closer in performance and application than the straight-walled rifle and pistol cartridges. But there are stark enough differences and nuances to the .22 cartridges to warrant some discussion, especially if you aren’t familiar with one or both. Though, given the sheer profusion of the Long Rifle, both being foreign seems a stretch.

In essence, the .22 WMR vs .22 LR discussion boils down to application. While the .22 LR is a generalist extraordinary—capable hunter, unparalleled plinker, dead-nuts target cartridge—the .22 WMR excels in one category. It’s a hunter and even here the terms might too be broad. The magnum rimfire’s specialty, where it makes its bones and finds few its equal is varminter. Pest control, that is.

Yes, it’ll pop prairie dogs from sunrise to sunset. Mangle marmots with the best of them. And flay felonious foxes on the hoof from the hen house. True enough, at a much closer range and without as much authority, the .22 LR will do the same, just as the .22 WMR will murder tin can and spinner targets on a lazy summer afternoon. But there are some good reasons why it worth the effort to keep each rimfire cartridge in its wheelhouse.

Brief History Of The .22s

As always, it worth looking back at the history of a cartridge to get a better sense of its present use. For the .22 LR, it goes way back.

Designed in the early 1880s by Steven Arms, the Long Rifle was an amalgamation of a couple of other .22 rimfire cartridges. Stevens took the .750-inch case from the .22 Long and the 40-grain heeled bullet from the .22 Extra Long to create what we know today as the .22 Long Rifle. Union Metallic Cartridge Company produced the first factory .22 LR ammunition, a 40-grain round that clocked in at 1,082 fps from a rifle. Since, the .22 LR has gone on to become among the most-shot cartridges in the world, with somewhere in the neighborhood of 2.5 billion rounds produced annually.

The advent of the .22 WMR came much later, the late 1950s, in the first serious attempt in the 20th Century to improve the range and killing capability of the .22 caliber. By all accounts, it succeeded marvelously. Utilizing the .22 Winchester Rimfire case and extending it to 1.055 inches, Winchester greatly increased case capacity, thus the velocity of the magnum rimfire. Furthermore, they topped it with a tougher jacketed bullet to ensure its projectile didn’t come apart at its top-end velocities. Today, the .22 WMR is still the hottest rimfire of that caliber, capable of pushing a 40-grain bullet from a rifle muzzle at 1,900 fps—in some cases even more.

As should be obvious from the above section, the magnum rimfire has a decided ballistic edge in the .22 WMR vs .22 LR discussion. At least in terms of its velocity and range. But that doesn't necessarily mean it's a more talented cartridge than the .22 LR. A quick example. 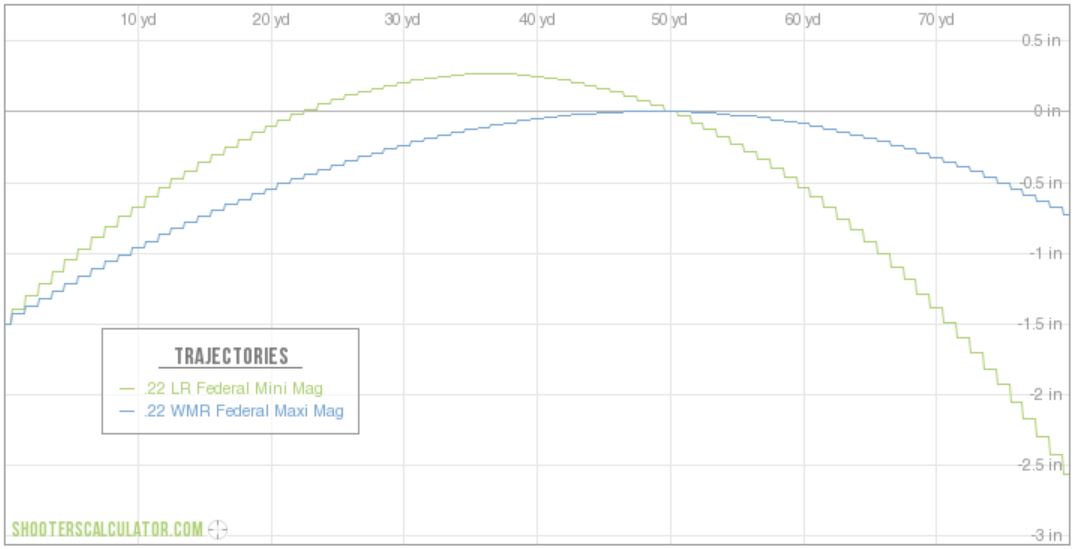 Extend the range, things become even blunter. Given the Long Rifle round goes sub-sonic around the 30-yard mark, its range is somewhat limited. It only suffers around 2.5 inches of drop at 80 yards, in turn—with the aid of a good riflescope—could pick off a prairie dog at that distance. Much further and it’s pushing things with its quickly degrading trajectory. The .22 WMR on the other hand remains supersonic out to roughly 150 yards and drops 11-inches less than the long rifle at this range. So, it reaches much further.

The magnum's hitting power is where things get tricky. At 50 yards, it delivers 110 ft/lbs of energy—more than twice as much as the smaller .22. Though, this isn't a case where more is better. While the .22 WMR will put a varmint on the ground for good, it potentially proves too much for game meant for the table. Tree squirrels for certain, but at closer ranges, it will bloodshot the likes of cottontails and jackrabbits. Not so the .22 LR, which at most normal hunting ranges delivers enough to put an animal down and not much more.

Terminally, the .22 WMR offers greater penetrating potential, which makes it more adept than the .22 LR at snuffing larger critters such as coyotes. Though, it’s a stretch to call it a dedicated predator cartridge—perhaps an occasional one. Additionally, this characteristic perhaps makes it better suited to self-defense than the Long Rifle and some ammunition companies have developed loads for just such work. This isn’t to say either .22 is ideally suited for dealing with two-legged predators by any stretch of the imagination. No arguments, they are both deadly. However, it’s questionable if it’s wise to rely on either to neutralize a threat. But if one of the .22s is all that’s on hand, they’re better than nothing.

The Many Bullets Of The .22 Magnum

Advances in bullet design have touched all corners of the firearms world including rimfire cartridges. This is a boon for the dedicated .22 LR shooter, who now finds some interesting additions—monolithic copper hollow-points, for instance—in his arsenal. Nice as this is, by and large, solid lead and copper-plated lead bullets remain the staple and give a decided edge to the larger cartridge in the .22 WMR vs .22 LR conversation.

Much like its centerfire cousins, the magnum rimfire mainly utilizes jacked lead-core bullets, which allows it to take advantage of some large technological leaps of recent decades. One that quickly jumps to mind, polymer-tipped hollow points, such as Hornady’s V-Max bullets. In addition to improving the bullet’s ballistic coefficient (how efficiently it cuts the air), it also improves terminal performance by initiating the bullet’s expansion. But the magnum rimfire also uses tried-and-true bullet construction to improve its hunting versatility. For meat hunters, soft-point, controlled-expansion options such as CCI Gamepoint, help to ensure less damage is done to the game.

Long Rifle Still The Most Affordable .22

Truth be told, this is one of the big dividing lines between the cartridges, the difference-maker for most shooters. It always comes down to money, right?

In short, you’ll always get more shooting done with a .22 LR, simply because it’s a more affordable cartridge. In saner times, when ammunition isn’t akin to Unobtainium, Long Rifle will run you around a dime or less per trigger pull. While .22 WMR, expect it to run $.20 or more per squeeze. Affordable when measured against centerfire cartridges, it still adds up and certainly makes the larger cartridge less attractive for pleasure shooting.

Gunning Up The WMR And LR

Here’s the good news, no matter where you fall in the .22 WMR vs .22 LR discussion, your cartridge is on equal footing when it comes to firearms. Rifle, revolver, pistol—you can find an iron chambered for either cartridge. Go something like the Ruger Single-Six Conversion you can shoot both with a simple swap of the cylinder. Hey, might as well take advantage of similar bullet diameters. (Note, the diameters aren't exactly the same the—.223 for .22 Long Rifle and .224 for the .22 WMR.)

The one difference, on average, you’ll find more affordable guns in .22 LR. No, there’s not a conspiracy against the magnum cartridge, it’s simply a matter of more manufacturers make .22 LR guns. These include very economical options typically angled at beginning shooters. As far as what sort of gun each gun excels from … all of them—you simply need to determine what type best fits your applications.

What Are They Good For?

We pointed out at the beginning of the article, the .22 WMR excels in one particular niche—varmint hunter. Does this mean it can’t be used as a meat hunting cartridge or for target shooting? Perish the thought. With greater velocity, shooters utilize the cartridge for long-range rimfire shooting. A scaled-down firearm—say a 6-inch barreled revolver—tames it enough to work on edible game at closer ranges, if there’s a steady enough shot behind the trigger. But overall, most cherish the magnum rimfire as among the most economical options to ride an acreage of ground squirrels or exterminating vermin such as skunks. Well out of spraying range, mind you.

As for the .22 LR, what can’t it do is a better question. While its killing power isn’t as great as the .22 WMR, particularly at longer range, it’s still the go-to cartridge of bunny hunters and other small-game enthusiasts. And it's equally as potent on varmints, it just won't catch them as far out or product as dramatic results as the magnum.

Additionally, its resume as a target round is impeccable. Among the fastest-growing precision shooting competitions, NRL22, is tailored to the Long Rifle and it’s a staple of bullseye matches. Perhaps its only limit is its range, but that’s bothered few the past 100 some year.

And price? Even in lean years, the .22 LR remains the most abundant and affordable cartridges. Plain and simple, you'll get more shooting done with the old standby.

Most shooters are well served having guns chambered in both the .22 LR and .22 WMR. Neither is going anywhere any time soon and each absolute joys to pitch downrange.

What if it's one or the other? In that case, if you happen to be a farmer or rancher that requires an economical option to keep ground squirrels out of the hay or prairie dogs from tearing up an alfalfa field, the .22 WMR is perhaps the best choice. The cartridge owns the pest-control wheelhouse and stands tall in this role.

For the rest of us, the .22 LR is the logical choice. It's simply the more versatile of the two cartridges. Be it drilling bullseye or putting small critters out of their misery, the Long Rifle is a proven asset. And one that won't break the bank. Honestly, no collection is complete without one.