The world is awash with excellent .22 Magnum ammo. Here are some of the top choices that bring out the best in the mini magnum.

What Are The Best .22 Magnum Ammunition Options:

For more than a half-century, one .22 rimfire cartridge has ruled them all—the .22 Winchester Magnum Rimfire (.22 Magnum for short). There’s no comparison. Plain and simple, with more case capacity the cartridge shoots flatter and longer and hits harder than any of its small-bore rimfire brethren. Though, it’s not all rainbows and mist-ified prairie dogs when it comes to the big little cartridge.

Talented as the .22 Magnum is, it presents some problems. Sure, the cartridge outdoes the time-tested .22 Long Rifle in most categories but still proves too little for some tasks, too much for others. As luck would have it, there are workable solutions to these performance issues. First, is choosing the appropriate gun for your particular application. The second is choosing the right ammunition.

Luckily, the world is awash in specialized .22 Magnum ammo for target shooting, hunting, pest control and, yes, self-defense. Ferret out the right load, this cartridge is a serious contender in all four arenas.

Quite simply, .22 Magnum ammo in this category has to walk a fine line. At once, it must have the red-hot velocities and range advantage the cartridge is known for, but without overdoing terminal performance. If you don’t have something for the pot, what’s the use of taking the magnum on the hunt?

Typically, your best bet is ammunition modeled after large-game hunting cartridge, particularly a controlled-expansion bullet. These projectiles have a somewhat thicker jacket and don’t dump all their energy on impact, thus thoroughly perforate a critter, while leaving something for the plate. Sporting a dimple-tipped soft-point bullet, Gamepoint performs reliably and makes the .22 Magnum a legitimate squirrel option. Though, it’s not a bad choice for pelt hunters who prefer taking a lighter rifle into the field. CCI offers two loads of the .22 Magnum ammo—40-grain and 35-grain—with the heavier load perhaps a more adept jack-of-all-trades. With a listed velocity of 1,875 fps, it's hot, but much tamer than the 35-grain ammo, which cooks at 2,100 fps. A very reliable feeder, as is most soft-point ammo, Gamepoint tends to play nice with most semi-autos. Good news when you’re chasing fast quarry, like rabbits or foxes. www.cci-ammunition.com 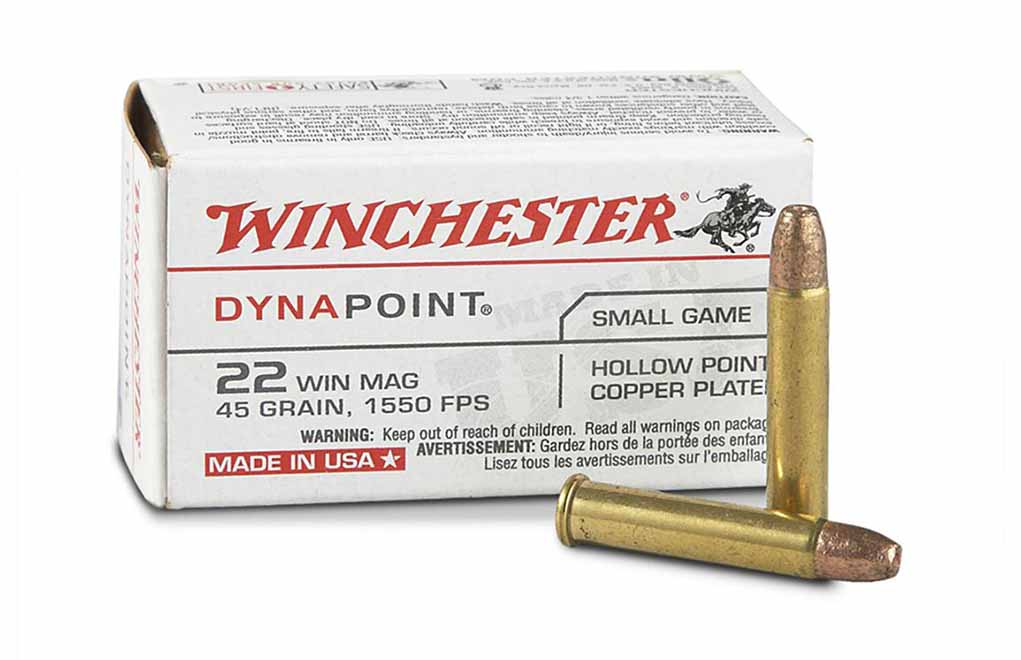 Perhaps only second to CCI in .22 Magnum ammo options, Winchester has a load for nearly any endeavor. When it comes to meat hunting, few beat its 45-grain Dynapoint. Admittedly, it’s among the tamest option out there with a very middling velocity for the magnum cartridge—1,550 fps. Yet, for closer shots in thick woods, the option offers up just the right amount of performance, without being overwhelming. The Dynapoint bullet is top-notch, a copper-plated hollow point. In addition to reliable expansion, it holds together well to produce a deep and deadly wound channel. winchester.com

Putting varmints out of their misery is where the .22 Magnum excels and where you’ll find the most selection in ammunition. In general, this class of ammo is topped with thin jacketed bullets, pushed to top velocities—a deadly combination. Not only does this give these options devastating terminal ballistics, with bullets that dump their energy quickly and explosively. But also the ammo that goes to the limits of the cartridge with near pin-point accuracy. Keep the expansion rate in mind when shopping pure varmint ammo, some may not be adequate for larger critters, such as coyotes. POP! Those with any experience with Speer TNT bullets of any caliber get the allusion. A thin gilding metal jacket and soft lead core make for one of the most explosive projectiles on the market, just the ticket for sending pests to varmint Valhalla. The bullet's design is further enhanced with a wide hollow-point guaranteeing an almost immediate energy dump and devesting results. CCI’s backs up the .22 Magnum ammunition’s performance with a charge that generates a muzzle velocity right around 2,220 fps out of most long guns. At 30-grains, the stuff is grand medicine for woodchucks on down. But given its rapid expansion is marginal on larger vermin. www.cci-ammunition.com 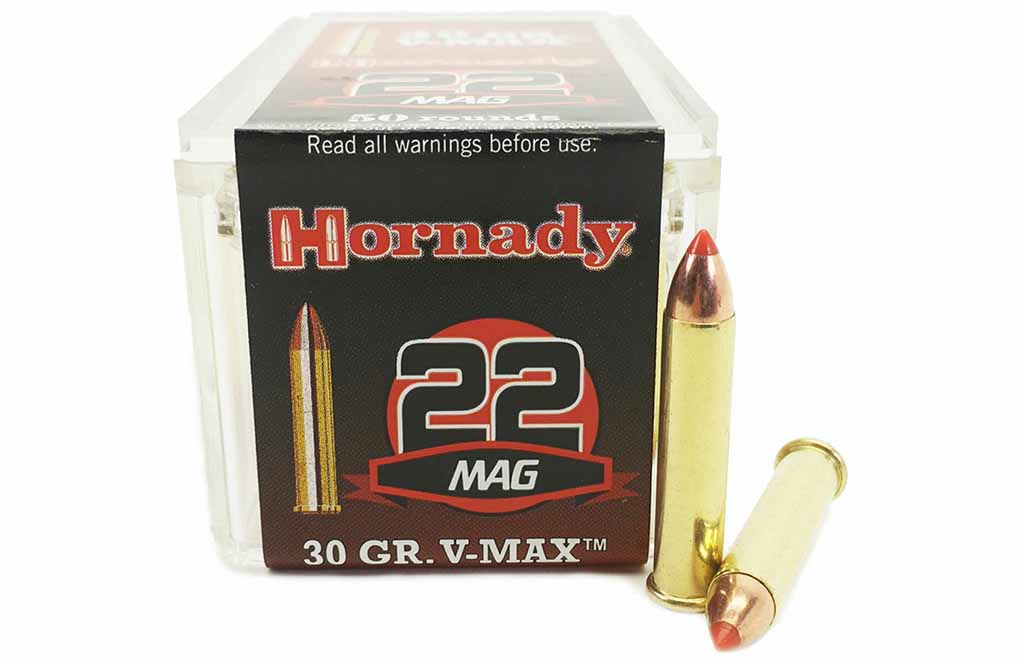 For some, you aren’t shooting varmints if you aren’t shooting with Varmint Express. Like the other loads in the iconic Hornady line, the .22 Magnum ammo features a ballistic-tip V-Max bullet, a technology the company pioneered. The feature pulls double-duty, improving the bullet’s ballistic coefficient (how efficiently it cuts the air) and terminal performance. Both are in play with Hornady’s 30-grain load. Expect a legitimate 150-yard option out of most rifles and near point-blank shooting out to that distance on a standing prairie-dog-sized target. Once it reaches its destination, don’t expect much left. Moving at 2,220 fps at the muzzle, the V-Max bullets positively detonates. www.hornady.com While Aguila made headway with its centerfire ammunition in recent years, its bread-and-butter is choice rimfire options. Of these, its Silver Eagle 40-grain .22 Magnum ammo is among the most versatile. Honestly, it walks the line between hunter and varmint ammunition—though tends more to the latter category. Additionally, its weight and semi-jacketed bullet design give it the chops to tackle any varmint—rat, raccoon, coyote or marmot. Nickel-coated brass is a nice touch as well, not only making it corrosion resistant, but also smooth feeding. A reliable option if you happen to favor semi-autos. www.aguilaammo.com

There is nothing too technical about this class of .22 Magnum ammo. They’re simply the affordable, accurate and reliable options you’ll take to the range or out for an afternoon of plinking. Much like their centerfire counterparts, range fodder is typically topped with a FMJ bullet. Thanks to the stout construction of their bullets, these loads also work where maximum penetration is at a premium. In more abundant years—not 2020 or 2021—Range Dynamics is a very affordable and enjoyable choice for range work. The Italian manufacturer sticks with a winning and familiar formula with this .22 Magnum ammo, topping it with a 40-grain bullet and kicking it out the muzzle of most long guns at 1,900 fps. This produces the results shooters look for out of the cartridge, giving it a range of 150-yards, maybe a smidgin further in some cases. Handgun shooters should equally find the flat-nose FMJ round responsive and just the stuff to stay in the running in a bullseye competition. fiocchiusa.com Again—current price trends aside—Federal’s .22 Magnum target ammunition doesn’t dent your pocketbook. At the same tick, you won’t compromise with the Champion line. Little surprise, the ammunition boasts a flat-nose FMJ bullet that comes out at 1,900 fps. Why change what works? www.federalpremium.com

It should be pointed out the .22 Magnum isn’t a ideal self-defense cartridge. No doubt about it, the cartridge is deadly. But it’s questionable if it has the chops to reliably stop a threat. Particularly if you compared the .22 to proven self-defense options, such as 9mm, .40 S&W and the like. That said, the cartridge might be some people's only option. In turn, it worth discussing appropriate .22 Magnum self-defense ammunition. A long-running .22 Magnum ammunition option angled at self-defense, Hornady milks the most potential out of the caliber for the application. It’s an interesting concoction. Penetration is always a concern with a rimfire load, ensuring it has enough gumption to get to vitals. Averaging around 12-inches of penetration in bare ballistic gel, Critical Defense hits the mark. And Hornady takes it a step further by improving ammo’s wounding capacity with FTX Bullet. The same as the centerfire Critical Defense ammo, the rimfire round boast a hollow-point bullet with FlexTip polymer insert. The insert keeps the bullet from clogging and initiates reliable expansion for a larger wound channel. Best of all, the 45-grain load is optimized for performance out of the small carry guns typical for the caliber—leaving a 1.875-inch snubbie at 1,000 fps. www.hornady.com