Ruger hit a grand slam with its first Ruger 22 pistol, introduced to the shooting public in 1949. Here are Gun Digest's top picks of Ruger rimfire handguns.

When an advertisement for the “.22 Ruger pistol” appeared in the August 1949 issue of the National Rifle Association’s American Rifleman magazine, firearms history was made. The ad presented the very first Ruger 22 pistol to the shooting public, and it also introduced the name Sturm, Ruger and Co., Inc. to an industry that one day would be dominated by the company.

At a glance, the image of the Ruger pistol was very familiar; it bore a striking resemblance to the German Luger. Not only were the names similar, the overall look of the new handgun—the profile, angle of the grip, shape of the trigger guard, the tapered barrel and design of the front sight—said “Luger.”

This was not a negative, as the Luger was one of the most famous and recognizable guns in the world. However, the similarities ended with the outward appearance, for the Ruger’s operating mechanism and blow-back action were nothing like that of the toggle-locked, recoil-operated Luger.

The introductory price for what would soon become known as the Standard Model was $37.50, well positioned to compete with the other .22 semiautomatic pistols on the market.

This was about half the price of the popular Colt Woodsman, and was also less than the lowest priced High Standard .22 pistol, those being the only manufacturers of rimfire pistols in the country at the time.

Primarily based on that ad in American Rifleman, workers at the Ruger plant in Southport, CT were soon very busy filling orders. By October 6, 1949 the first shipment of 100 pistols was on the way to retailers, wholesalers and individuals. The new pistol was an immediate success and the Ruger name was on its way to becoming a major player in the firearms industry.

The Ruger company placed this ad in the August 1949 issue of American Rifleman, the NRA’s membership journal and the only true “gun” magazine at the time.

From 1949 to 1951, the Standard Model had a Ruger red eagle medallion inlay on the left grip panel. The medallion was designed by Bill Ruger’s partner and co-founder, Alex Sturm, who was an artist and writer, in addition to being a collector of fine firearms.

The red eagle became the logo for the company in its advertising, on letterheads, catalogs and business cards, as well as the grip panel of the pistol.

This was changed to a black eagle beginning with serial number 34369, in honor of Sturm who died on November 16, 1951 from viral hepatitis at the age of 28.

The black eagle grip was on all Ruger Standard .22 pistols until 1999, when the red eagle medallion was resurrected for a special 50th anniversary model.

(Approximately 25,600 pistols with red eagle medallion on the grip were manufactured before the death of Alexander Sturm, although serial numbers exist beyond 35,000. This is due to the fact that blocks of serial numbers were often set aside and then used at a later date.)

The Standard Model was based on a simple and reliable blowback design that would function with both standard and high-speed .22 Long Rifle ammunition. Features include a tubular receiver with a cylindrical bolt, blue finish, checkered hard rubber grips, wide grooved trigger, thumb safety, fixed sights and a nine-shot detachable magazine.

With the original 4 ¾-inch barrel, weight is 36 ounces. Approximately 890 pistols were shipped via REA in a wooden “salt cod” box. From 1956 to 1967 about 5,570 “U.S.” marked Mark I Target Models were shipped to various agencies of the U.S. military. No NIB examples are believed to exist as all of these pistols were used for training purposes.

Some were fitted with silencers and used in the tunnels of Vietnam. The serial numbers on some U.S.-marked guns measure 1⁄8-inch in height, while standard serial numbers measure 3⁄32-inch.

Changes for this model were mostly on the inside and included a 10-round magazine instead of the original nine, a faster lock-time, a magazine release button that could easily be moved to either side of the grip, and a device to hold the action open after the last shot was fired.

A new safety allowed the pistol to be loaded or unloaded, or the action to be manually operated, with the safety on. With the Mark II there was an optional stainless steel finish.

The original price for this model in 1982 was $147.50. Two special “Friends of NRA” models were manufactured for the National Rifle Association’s auctions in 1997 (blue finish) and in 2001 (stainless). This special model is a civilian version of a special model made for the federal government as a training pistol for U.S. military personnel. It has an adjustable rear sight, 6 7⁄8-inch bull barrel and came with either a blue or stainless finish.

These models were made with a tight chamber to enhance accuracy. A very limited number with a “U.S.” marking on the right side of the frame—perhaps no more than 25—are believed to have found their way to civilian hands.

One of these models was sold at auction in December 2013 for more than $1,500. The civilian Government Model was identical but did not have the government markings. In 1992, a variation with a slab-side barrel was introduced in stainless steel.

Introduced in 1993, the Model 22/45 featured a composite (Zytel) frame patterned after the shape of the grip frame on the Government Model 1911 .45 auto pistol and was designed to appeal to the many shooters who favor that model.

Other changes included reshaping the bottom of the magazine and moving the magazine release button to the same position as is found on the Model 1911.

This further refinement of Ruger’s original .22 pistol was introduced to the marketplace in 2005 and as of 2014 is the current model in production.

New features included placing the magazine release button on the left side at the rear of the triggerguard, where it is located on most modern semi-auto pistols. 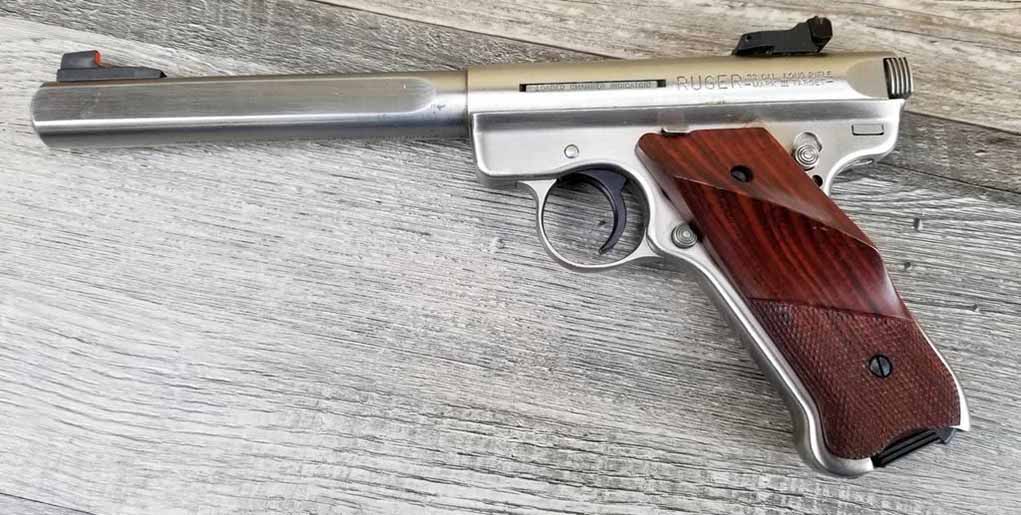 A variant of the Target Model series, the Competition model was introduced in 2005. It comes only in a stainless finish, and has a 6 7⁄8-inch slab-side barrel and checkered brown laminate grips with a thumb rest. Weight is 45 ounces. 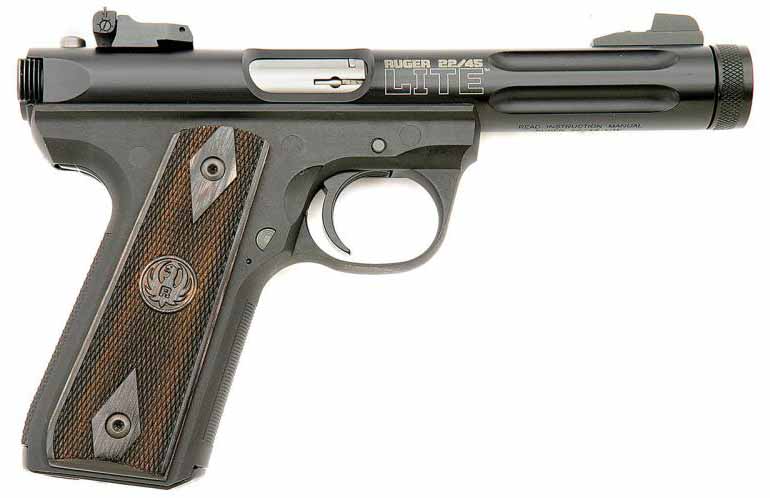 
When Bill Ruger rolled out his Standard Model .22 pistol in 1949, it’s doubtful that even he could have imagined the success the little semi-auto .22 would bring. It seemed everyone in America wanted the cheap .22 pistol (“cheap” as in “inexpensive”).

The Standard Model would eventually beget a brood of variants that would cover everything from backyard plinking and small game hunting to target models. These would stand shoulder-to-shoulder with the High Standard Supermatic and Smith & Wesson Model 41 on the firing line of NRA Bullseye competition.

The Standard Model and Mark I Target would eventually evolve into the Mark II, Mark III and — the latest — Ruger Mark IV. Today’s Mark IV .22 pistol represents the greatest design change since the advent of the Standard Model.

They were plagued through the Mark III evolution with difficult disassembly and reassembly. The Ruger Mark IV now features an easy push-button takedown, which snaps back together after cleaning.

If competitive match shooting is in your future, check out the Ruger Mark IV Competition and Ruger Mark IV Target as affordable alternatives to a Model 41.

The Charger was introduced in 2008 with a 10-inch barrel and a gray/black laminated pistol-grip stock with a unique ergonomic fore-end. A bipod is included.

Capacity of the 10/22-type rotary magazine is 10 rounds and the weight is 52 ounces. An accessory rail is mounted on top of the receiver. The Charger was in production from 2008 through 2012.

This model was introduced in 2012. It is a traditional double/single-action semiauto chambered for the .22 Long Rifle rimfire cartridge and operates with a straight blowback design. (Unlike the SR9, SR40 and SR45 centerfire models, the SR22 is not a striker-fired pistol.)

With its polymer grip frame and aluminum slide, the gun weighs only 17.5 ounces. The barrel length is 3.5 inches with the overall length measuring 6.4 inches. Magazine capacity is 10 rounds. The three-dot style sights are adjustable and there is a Picatinny rail for lights or other accessories.

Other features include an external hammer, a loaded chamber indicator, and ergonomic rubber grips that come in two interchangeable styles.

Operating controls include a safety/decocker lever and magazine release button, both ambidextrous. Finish is black matte on the frame and either a black or silver anodized slide. A threaded barrel is an available option.

Inspired by the classic Colt Single Action Army, the Single Six in .22 LR was first introduced with a 5 ½-inch barrel. Later models were added with a 4 5⁄8-inch, 6 ½-inch or 9 ½-inch barrel lengths. The Single Six could also be used with .22 Short or .22 Long ammunition.

As the name suggested, the cylinder held six rounds but, as noted above, the original model could only be safely carried with the hammer over an empty chamber.

Grips were checkered hard rubber with a black eagle medallion inlay on each side. Varnished walnut or stag grips were available as an option with true ivory grips added in 1954.

The standard model had a blued barrel and cylinder with an anodized aluminum grip frame. The earliest Single Sixes featured a flat loading gate and rounded profile front sight and are referred to by collectors and Ruger aficionados as Flat Loading Gate models.

A lightweight variation with an aluminum frame and/or cylinder was introduced in 1956.

The Super Single Six model was introduced in 1964 with upgraded features including an adjustable rear sight, a ramp front, and an integral sight rib. Most Super Single Sixes came with interchangeable cylinders for .22 LR and .22 WMR.

There was a factory recall of the .22 WMR cylinders, meaning that samples with both cylinders are rare.

About 1000 Bearcats were sold with the WMR cylinders, between serial numbers 93-00500 and 93-01944. A “timing” problem made them unsafe and therefore the magnum cylinders were recalled, but not all were returned to Ruger.

The rarity of samples with both .22 LR and .22 WMR cylinders makes them more valuable but the WMR cylinders must not be used. As stated on the Ruger website: Firing a .22 Magnum cartridge in a cylinder not correctly timed with the barrel may result in excessively high pressures, causing the cartridge case head to fail.

This can result in personal injury to the shooter or bystanders from pieces of cartridge case brass.

Current production revolvers are available only in .22 LR with a 4.2-inch barrel and either a blue or stainless finish.

This article is an excerpt from the Standard Catalog of Ruger Firearms.