For the serious one-cartridge shooter, these three .357 Magnum guns set you up to handle any situation.

What Are The Ruger .357 Magnum Options:

The idea of having one gun you could trust to sort out all your problems is appealing and has merit. Like grandpa said, “Beware the man with one gun.” However, unless you only have a limited assortment of problems to solve, a one-gun answer will be, at best, a compromise. I don’t believe there’s a one-gun answer for everything—or even most things. But what if we took a different approach and instead of relying on one gun, we relied on one cartridge?

This drastically changes the conversation, because by settling on a single cartridge we can rely on multiple guns to shoot it. Of course, it also limits possibilities. For a serious one-cartridge solution, we have to turn to a revolver cartridge that can serve triple duty in a concealed handgun, a general-purpose sidearm and a rifle. In a perfect world, you’d be able to carry all three at the same time without undue discomfort.

There are really only three options to choose from: the .327 Federal Magnum, the .357 Magnum and the .44 Magnum. The .327 would give you an edge in a concealed-carry revolver because it offers six shots instead of five. The .44 Magnum would reign supreme in a rifle because of the power it can deliver. The problem with the .327 is that Henry is the only company making rifles for it, and the problem with the .44 is that even compact revolvers aren’t all that compact … and they hurt on both ends.

That leaves the .357 Magnum. And quite frankly, while it might seem like a compromise or that you’re settling, it’s a fine choice. From a self-defense standpoint, the .357 Magnum has a stellar reputation for stopping fights. As an everyday sidearm or as a predator defense gun, with the right ammo it can deal with small and large four- or two-legged critters, and even big bears. And in a rifle, the .357 Magnum is surprisingly effective.

The guns chosen would be important, but the key to versatility and success with this one cartridge approach is the ammunition.

The Ruger LCR is a magnificent little creation of steel, aluminum and polymer. Ruger offers a version with a hammer and one without. With its 1.87-inch barrel, the LCR weighs only 17.1 ounces. A soft rubber Hogue grip is standard, and the suggested retail price is $669. This little revolver is as comfortable to carry as it is to conceal.

You could argue that the trigger is a little on the heavy side, but the primary problem with such a lightweight, compact, .357 Magnum revolver is holding onto it when shooting full-power loads. For this reason, many who carry .357 LCR opt for .38 Special +P ammunition.

The use of .38 Special ammunition in the LCR is actually a really smart choice, if—and that’s a big if—the right ammunition is chosen. After a good bit of terminal performance testing, the two standout loads for this little revolver are the Buffalo Bore Heavy .38 Special +P 125-grain LV (low velocity) JHP and the 135-grain, Speer Gold Dot .38 Special +P. Both penetrate between 11 and 12 inches and expand to just a shade more than a half-inch. This revolver/ammunition combination fills the everyday carry, defensive handgun need.

The next slot we need to fill is a general-purpose handgun—one that you can use for hunting, predator defense and even protection. Single-action revolvers are often looked at as antiques or curios more suited for recreational shooting. The truth is that a high-quality, single action is rather versatile, and short of high-end custom creations, no single-action revolver has a better reputation than the Ruger Blackhawk. The standard Blackhawk with a 4.62-inch barrel retails for the same price as the LCR, but a better option is the .357 Magnum/9mm Luger convertible model, which costs about $100 more.

In this modern world of high-tech controlled-expansion projectiles, hardcast bullets get overlooked. They’ll out-penetrate every other style handgun bullet and, with their flat meplat, they do a terrific job of damaging tissue. For the best hardcast ammunition out there, turn to Buffalo Bore. Their Heavy Outdoorsman 180-grain load will generate 1,379 fps and 759 ft-lb of energy from a 4.62-inch barreled Blackhawk. I’d like to be able to tell you how deep one of these bullets will penetrate, but after stacking gel blocks 36 inches deep and failing to stop one, I gave up.

This revolver, paired with a Galco 1880’s holster and cartridge belt, is easy to carry. Just as importantly, the cartridge belt provides a way to transport a lot of ammunition that’s close at hand for the single action, the LCR and the rifle.

When selecting rifle chambered in .357 Magnum, the tendency is to go with a lever gun. That’s a choice that’s hard to argue; my Marlin 1894 SBL is a fast-handling, sweet-shooting rifle. However, this three-gun battery is missing the ability to put bullets on target with extreme precision. To do that best, a magnified sight is needed. Sure, you can put a riflescope on a lever gun, but it destroys the handling qualities of the piece. Fortunately, Ruger makes the 77/357, a reasonably compact bolt-action rifle that weighs only 5.5 pounds, is a full pound lighter than the Marlin lever gun, and comes with a barrel that’s 2 inches longer. Retail price: $999. A Leupold VX-3i, 1.5-5X20mm riflescope only adds 9.3 ounces to this rifle and provides plenty of magnification to take the .357 Magnum cartridge to its maximum practical range. And, these rifles will shoot; 1 to 1½-inch 100-yard groups are common. The trick is finding a load that can stand up to the added velocity you’ll get from the 18.5-inch barrel.

The reason this is so difficult is because .357 Magnum ammunition is manufactured to work in handguns with barrels ranging from very short to about 6 or 8 inches. Bullets that’ll expand and hold together at handgun velocities tend to come apart when fired from a rifle with as much as 500 more fps behind them.

I had to do a lot of shooting to discover a bullet that’d stand up to the velocities the Ruger 77/357 was capable of generating. One that worked marginally well was the 125-grain Barnes TAC-XP load, but even that bullet blew off all of the petals at about 8 inches of penetration. I was having no luck until a box arrived from Federal containing some samples of their new .357 Magnum HammerDown load. Optimally configured for lever-action rifles, HammerDown uses a bonded bullet. Out of the Ruger 77/357, it penetrated 22 inches and expanded to .474 inch. This is elk-capable ammunition. 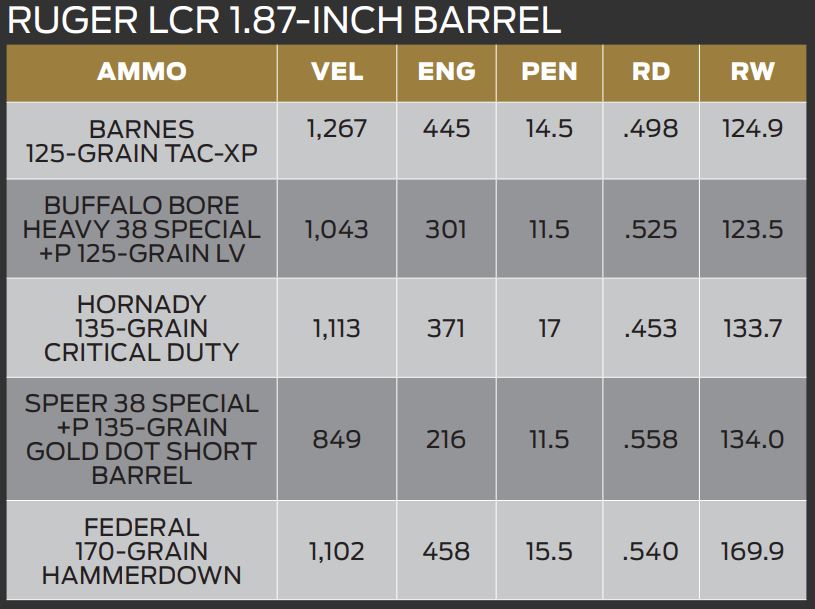 One of the most appealing aspects of three guns that utilize one cartridge is the possibility of one load that could work reasonably well in all of them. If you thought finding a bullet that could withstand rifle velocities was hard, finding one that’d deliver decent expansion and penetration out of a 1.87-, 4.62- and 18.5-inch barrel proved to be a monumental task. After more than a dozen loads failed to deliver the desired performance, almost as an afterthought I tried the 135-grain Hornady Critical Duty load. I wouldn’t say this load was perfect for all three firearms, but it could suffice as a one-load option. Out of the snub-nose, the bullet expanded 1.26 times its original diameter and penetrated 14 inches. Out of the Blackhawk, expansion came in at 1.64 times the original diameter, with 13.5 inches of penetration. And out of the 77/357, the bullet deformed with a frontal diameter measuring 1.4 times the unfired diameter with 17 inches of penetration.

The HammerDown also delivered good terminal performance from all three firearms. As noted, it worked great in the rifle, and out of the Blackhawk and LCR we got a glimpse of what performance further downrange would look like. From a terminal performance only standpoint, it performed better than the Critical Duty load. However, out of the little, lightweight LCR, recoil was brutal. After five shots, I felt the effects in my hand for the rest of the day. Call me a wuss if you like, but HammerDown ammo out of an LCR is a long way from fun.

The one-cartridge alternative to solving all your problems might be worth considering. Of course, if some of your problems include cape buffalo or prairie dogs, finding a one-cartridge solution gets impossibly complicated. However, for most shooters, there’s not much a fella couldn’t handle with a .357 Magnum, three good guns and a lot of ammunition.