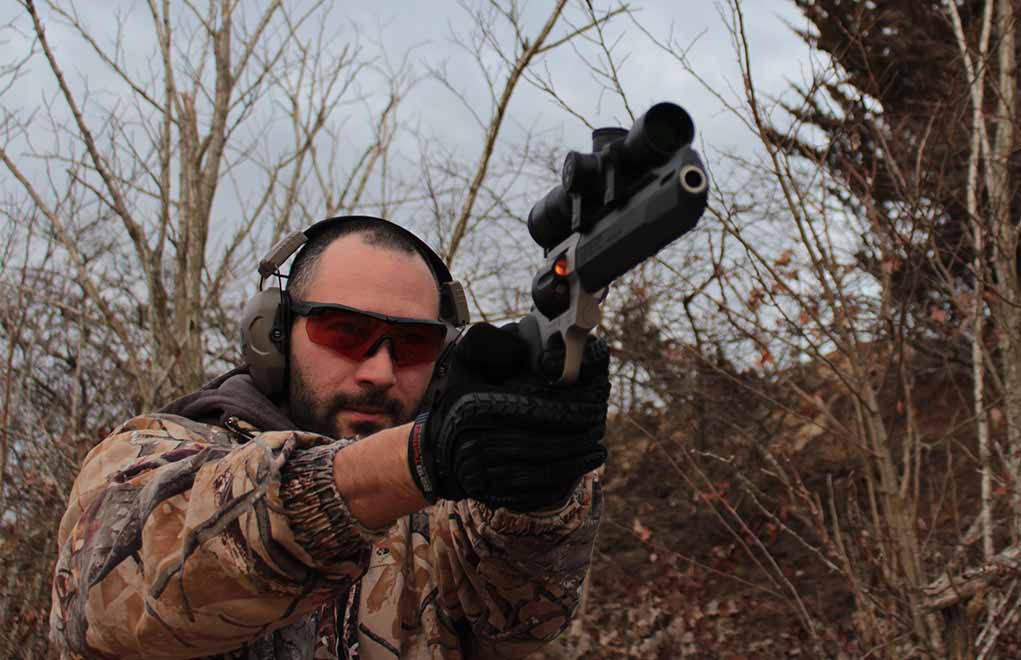 How The Raging Hunter Is Ready To Put Meat On The Table:

I’ll never forget my first deer hunt in the thick woods of upstate New York. In my naiveté, I decided to bring the most accurate rifle that I owned, albeit the heaviest.

About three miles into the woods is when that 12-pound, heavy-barreled .308 Winchester really started to feel like, well … 12 pounds. When I got to my buddy’s tree stand, I hobbled up the trunk to the makeshift 2×6 platform and hoisted this behemoth, my pack and everything short of a cup of coffee (which hurtled to the ground during this transaction) into my position and waited for first light.

Once that first crack of daybreak illuminated the horizon, I decided to take out my rangefinder and get an idea of what distances I would be working with. To my surprise, I found out that my clearest shot was only going to be a bit more than 50 yards. I never thought it possible—but I had brought too much gun!

Since that day, I have left my bench gun on the bench and started dragging out lighter and shorter rifles. This certainly was easier, but at the end of it all, it was still too much for heavily wooded areas.

The thought of handgun hunting entered my mind, but I have never really gotten too comfortable with big-framed revolvers, and I certainly wasn’t going to sacrifice lethality for ease of shooting.

That all changed at the Quail Creek Ranch in April 2018, when I laid my eyes on one of only three Taurus Raging Hunters in the country. I instantly noticed that it was unlike any other hand cannon on the market. It had balance, comfort—and was just gorgeous!

Taurus’s idea was to build on the success of the other Raging Revolvers and create something that would produce enough energy to humanely dispatch deer-sized game and still remain enjoyable to shoot and easy to carry. In addition, pistol optics are also commonplace now, so why not incorporate a simple mounting option while we’re at it?

The final product was chambered in .44 Magnum for its efficiency and availability—and was now in my hands! Writer Katie McCarthy stood next me as we fired cylinder after cylinder into a Revolution Targets Double Torso spinner until we got it flipping, end over end, like the world’s most inefficient windmill. Oh, the fun of unleashing massive rounds with little consequence to the wrists or forearms!

Later that day, we were all challenged to shoot at a random board of playing cards. The shooter with the four best hands would win their pick of any gun they shot that day. Seven well-placed shots landed me triple jacks with an ace-king kicker, for which I collected a handsome pot: a Raging Hunter of my very own.

What they did to me really wasn’t fair: giving me a taste, letting me leave with a shiny certificate stamped “IOU”… and then making me wait just shy of a year to get the Raging Hunter in my hands! Demand was so high for the gun, and the importing process was so painfully slow that things literally got held up on the dock.

Well, it finally arrived. It was exactly as I remembered—except that I had been sent the ultra-sexy, matte, two-toned version! I picked it up, quickly remembering the recoil-reducing rubber grips and the balanced feel of the steel-sleeved aluminum barrel. The words, “Raging Hunter,” were engraved along the side, with laser-sharp edges accentuated by slick angular cuts along the entire length of the barrel. Topping it off was a 13-slot Picatinny rail—perfect for mounting your favorite sighting system or even a flashlight in a 45-degree offset.

Reunited With The Raging Hunter

I was especially excited for the chance to try out different rounds to see the gun’s true accuracy potential (short of handloading). I requested a “dealer’s choice” of ammo from my friends at Federal Ammunition, who sent over some rounds in the 240- to 280-grain range.

Before hitting the range, I mounted up a Nikon Force XR 2.5-8x handgun scope ($289.99; NikonSportOptics.com) in a pair of Warne Mountain Tech steel rings ($139; WarneScopeMounts.com) to assure a solid and repeatable shot picture.

That range day wasn’t quite as cozy up north as it was down in Florida. My test day consisted of cool temperatures, intermittent showers and a 5 to 10 mph crosswind. I figured I would test this gun at the distances for which I would likely use it, so I set up an MTM High-Low Shooting Table ($129.99; MTMcase-gard.com) at just about chest level to give me a natural pistol shooting position.

I cradled the gun in a Caldwell Rock Mount rest and commenced to fire off the standard five five-shot groups with each type of ammo. I was delighted that all performed well inside of “minute-of-deer.” However, I was especially impressed with the 280-grain Federal Premium Vital-Shok round that features a Swift A-Frame bullet. These groups were consistently inside of 3 inches, with my best group of the day landing well inside that.

Interestingly enough, this round had the least amount of felt recoil—even though it was slinging the heaviest bullet. My overall experience was terrific (remember, I had fired more than 100 rounds of full-power .44 Rem. Mag. loads without issue). Recoil was certainly there, but it was mitigated by the integral muzzle brake that reduced and redirected the impulse, allowing for a fast follow-up shot if needed.

Back at the Lab

After returning from the range and changing into dry clothes, I decided to give the gun a quick cleaning and experiment with some holster options for field carry. Cleaning was exactly what you would imagine: Open the cylinder and then brush and patch the six chambers and the barrel.

I pulled out my Lyman trigger gauge while I was at my workbench and measured an average trigger pull of just 4 pounds, 1 ounce in single-action mode. Getting the pistol into single-action is a very smooth, quiet maneuver, so I don’t really see the point of having to fire a double-action shot; but even the full trigger squeeze isn’t half bad.

After wiping off my Raging Hunter, I tried on two different holsters from Uncle Mike’s. The 8.37-inch barrel is certainly hard to accommodate. However, Uncle Mike’s makes a holster big enough for it—and even one big enough to carry it with a scope. Both models are available in either left- or right-handed configuration to accommodate southpaws … or the other 90 percent of the population.

As I packed away the Raging Hunter, I imagined the real-life adventures I would share with this gentle giant. One thing is for sure: I won’t be dragging a shotgun into a tent anymore, because the Raging Hunter is much easier to wield in an emergency—especially in a confined space. CCI even makes two different shot loads that it will chamber to help with pest control or maybe even a little small-game hunting. Walks through the woods just got about 7 pounds lighter; and, with a good shoulder rig, there’s no reason not to climb into your tree stand with it on (unloaded, of course).

Overall, I was quite impressed with how well Taurus managed to tame the signature caliber of a young Clint Eastwood and create a monster gun that has a surprising amount of utility.

For more information on the Raging Hunter, please visit taurususa.com.

The article originally appeared in the October 2019 issue of Gun Digest the Magazine.