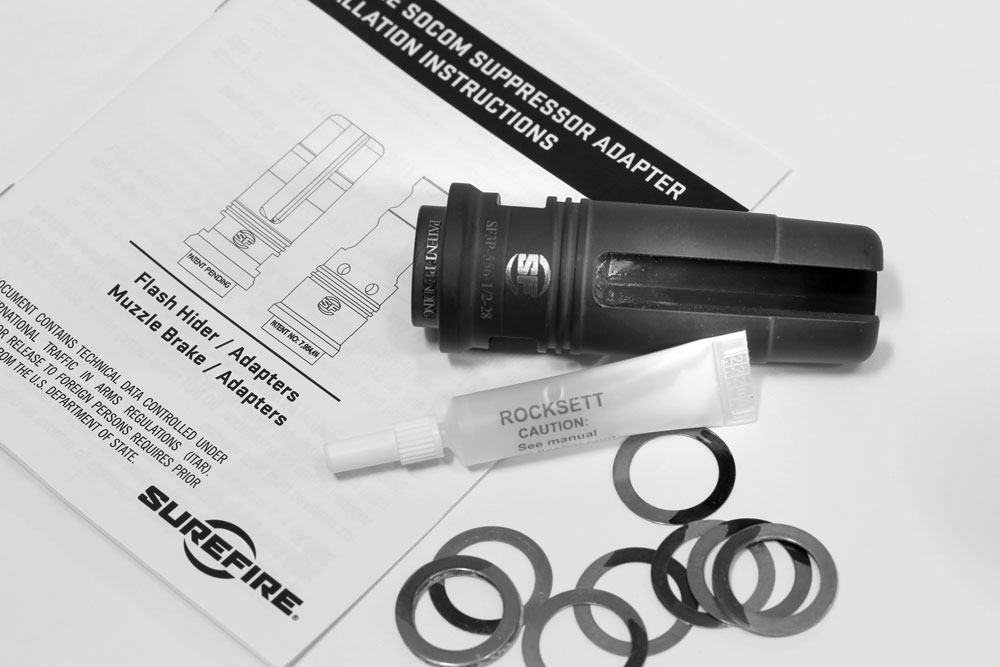 You are not going to attach your expensive new suppressor to the firearm of your choice with hose clamps and duct tape. You need something more permanent, rigid, aligned and reliable.

The mounting methods to attach a suppressor to a firearm fall into a few categories: direct thread, quick-attach, booster, integral, and exotic and rare.

Quick-attach is a development that comes to us for a particular reason – cost. Direct thread is a secure, rigid and easy method by which to attach a suppressor. But, once a suppressor is torqued in place, you need a wrench to remove it, and you need that wrench to install it on the next firearm. If you have a suppressor and two or three or more rifles you want to use it on, the wrench-and-direct-thread method gets old fast.

So, the makers came up with a mount called a “muzzle device”: one that threads onto the muzzle and stays there for the service life of the barrel. The muzzle device has a cylindrical or coned bearing surface, and fast-pitch threads and a ratchet or locking system. You can install the suppressor by hand in a few seconds and, assuming it isn’t too hot to handle, swap it from one rifle to another as quickly. No wrench needed.

A few details need explaining. “Fast-pitch” in this context does not describe a softball league, but the number of turns it takes to tighten a suppressor, or any threaded fastener. Let’s take the common 1⁄2-28 thread for a 5.56 mount. If the threaded portion, the shank, is half an inch long, then it will take fourteen complete rotations to get it all the way tight. A fast-pitch thread will be so coarse that it takes maybe two full rotations to tighten the suppressor, maybe one-and-a-half. Also, the threads on the muzzle device will often not be the common “V” threads you are familiar with, but have a profile known as Acme threads, which are flat-topped pyramids, not a pointy V.

Muzzle devices can be, and usually are, more than just mounts. At the very least, they are also flash hiders. So, if you have the rifle with the mount but for some reason are shooting it without the suppressor, you still have a barrel with a flash hider on it. Some are made as muzzle brakes. When the suppressor is on, the muzzle brake feature doesn’t happen. When the suppressor is off, the muzzle device works just like a brake or comp on a competition rifle. The shooter next to you will not be as enthused about that as he or she was when you were using your suppressor.

Finally, all this adds weight. Yes, it is only a few ounces, but it still adds weight. If you went with, for example, a titanium suppressor because you wanted it to be light, and then you go and add a steel muzzle device for mounting it, you just took away some of the lightweight advantage you paid a lot of money for.

A QC/QA suppressor and three muzzle devices (to mount on three different rifles) can end up costing as much as two direct-thread suppressors from the same manufacturer. Not to pick on them, but since I’ve got their catalog open on my desk at the moment, let’s look at a pair of SIG silencers (that’s the term they prefer), the SRD556 and the SRD556-QD. The QD version costs $100 more and weighs 3.5 ounces more. It does come with the muzzle device, but if you wanted to mount your SIG silencer on another rifle, you’d have to buy another QD mount, at $69. Which, by the way, is half what other muzzle devices cost for comparable suppressors. So SIG is giving you a real break here.

So, if you have two SRD556s that comes to $1,090 (MSRP). A single SRD556-QD and two muzzle devices comes to $780. Yes, it will take you a while to get to the point where it is cheaper to buy the direct-thread version in volume, but I hope you get the point. At some point, it is cheaper, and with other manufacturers, it will happen sooner.

You can make a fast-pitch thread on a mount and put a ratchet on it to lock it in place, but there are still many ways to do that. One is to make the ratchet spring-loaded and have it engage teeth on the back end of the muzzle device. Once you screw the suppressor down enough to reach the teeth, the ratchet starts engaging. When it bottoms out, you’re locked onto the last tooth it could reach.

Another way to do it is to spring-load the latch, but instead of grabbing onto teeth, it overlaps the rear shelf of the muzzle device. Here, when the latch gets past the rear shelf, the spring pops it back down, and it prevents rotation to unlock. Here we have the advantage of directional forces. That is, the suppressor wants to rotate to unlock. But the latch pivots in and out from the bore axis, not in the direction of the bore itself. The rotational forces can’t overcome the latch.

Another way to do this is one Surefire uses, a collar with an eccentric opening. The off-center hole of the collar means that when you rotate the collar it pivots to catch the rear shoulder of the muzzle device. Again, the rotational forces act in a different direction than the one the collar moves in.