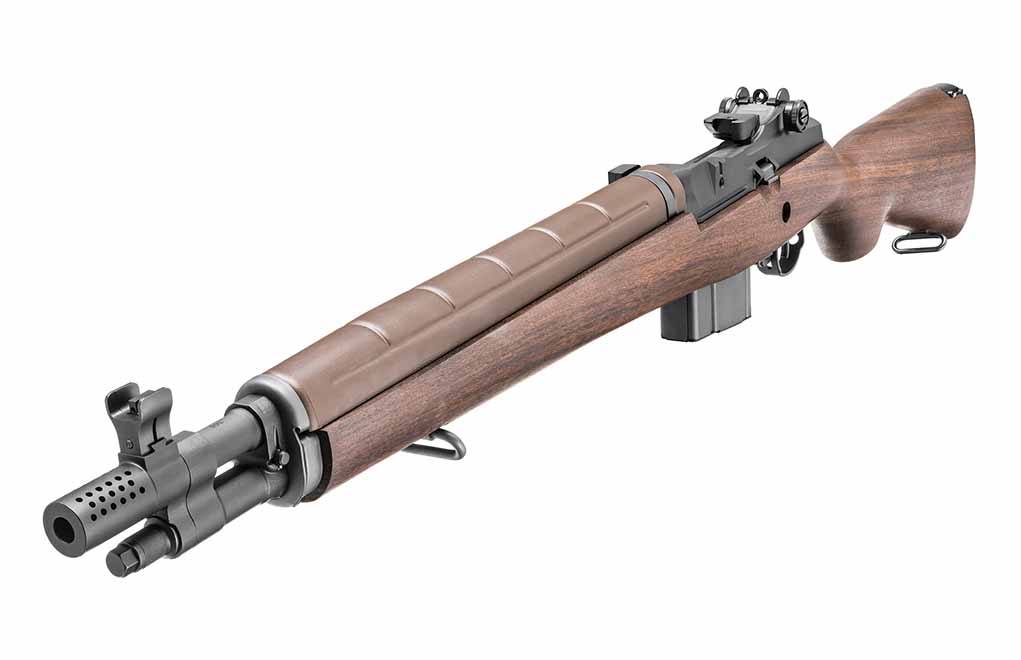 A throwback tribute to an M1 Garand that never made it past prototype, the M1A Tanker nonetheless looks like a slick little carbine.

Springfield Armory's looks to throwback with its new M1A Tanker, but there's not much to throwback to. Marketing mainly. That's pretty much all that exists when it comes to the gun inspiring the addition — the Tanker M1 Garand.

Essentially, this variation of the old warhorse, at least the ones that made it to market, was cooked up after World War II by enterprising dealers of military surplus. Shorten up the barrel a bit (to 18 inches typically), call it a “Tanker” Garand, let the gun buyer's imagination put it in a Sherman at Arracourt or the Bulge. Solid plan. A couple smaller gunmakers still turn them out.

To be completely fair, there were a couple prototype Tanker Garands produced — the M1E5 and T26. But neither made it much further than testing. Word is they were pretty tough on their internals and produced a muzzle blast akin to a small supernova. Though there were some field modified abbreviated Garands made on the fly during the war, but they most likely didn't go by the “Tanker” moniker.

Bubbles burst and wet blanks thrown, Springfield Armory's new M1A Tanker looks like a riot. Essentially a SOCOM in a wood stock, but for those who like walnut (count me among their ranks), it should make a dandy carbine. Of course, no Ping after you thumb off eight, but a removable box magazine. That's a fair trade-off. Just don't expect to win authenticity points if you bring one to the next World War II recreation society meet up.

GENESEO, ILL. – Springfield Armory® is proud to announce the newest member of the M1A™ family, the M1A™ Tanker.

Inspired by the shortened “Tanker” Garand rifles of WWII, the M1A Tanker combines handiness and maneuverability with full-size firepower. This Tanker configuration of our famous SOCOM 16 features a vintage walnut stock that pays tribute to those who have carried Springfield Armory rifles into battle for over 200 years. The M1A Tanker is a maneuverable and compact rifle, featuring a 16.25-inch parkerized barrel, nearly ten inches shorter than the M1A standard model, for quick-handling in close quarters.

The all-new walnut stock is mounted with an enlarged “ghost ring” aperture, adjustable for windage and elevation, and the front sight features an XS sight post with a tritium insert for fast, low-light target acquisition. Weighing in at only 8.75 lbs., the M1A Tanker tames the formidable .308 WIN/7.62 NATO round in a small, lightweight package. The Springfield Armory designed muzzle brake cuts recoil and enables fast follow-up shots on target.

“Our M1A SOCOM 16 was honored with the Golden Bullseye Award for “Rifle of the Year” in 2005. Because of the enduring popularity of that model, we wanted to offer that same rifle with a new walnut stock for a variation we know our customers will love,” explains Springfield Armory VP of Marketing Steve Kramer. The M1A Tanker accepts the same magazines as other M1A models, so users can choose from 5, 10, or 20-round magazines. A ten-round parkerized magazine is included with the M1A Tanker.

Ready for defensive use in any scenario, the M1A Tanker provides the reliability you expect from the legendary M1A platform, in a powerful, lightweight package.

For more information on the M1A Tanker, please visit www.springfield-armory.com.