There are some specific factors in play when choosing an AR for home defense. Here’s what to consider.

What sort of AR do you need for home defense?

When choosing a firearm for home defense, there are a lot of different areas to consider. Stopping power is a primary concern, but you also have to be concerned about over penetration. And you need a weapon that’s easy to use for all members of the family. Most people immediately think about pistols and shotguns; however, the AR platform has a lot of advantages over both of these and might be your best choice for home defense. 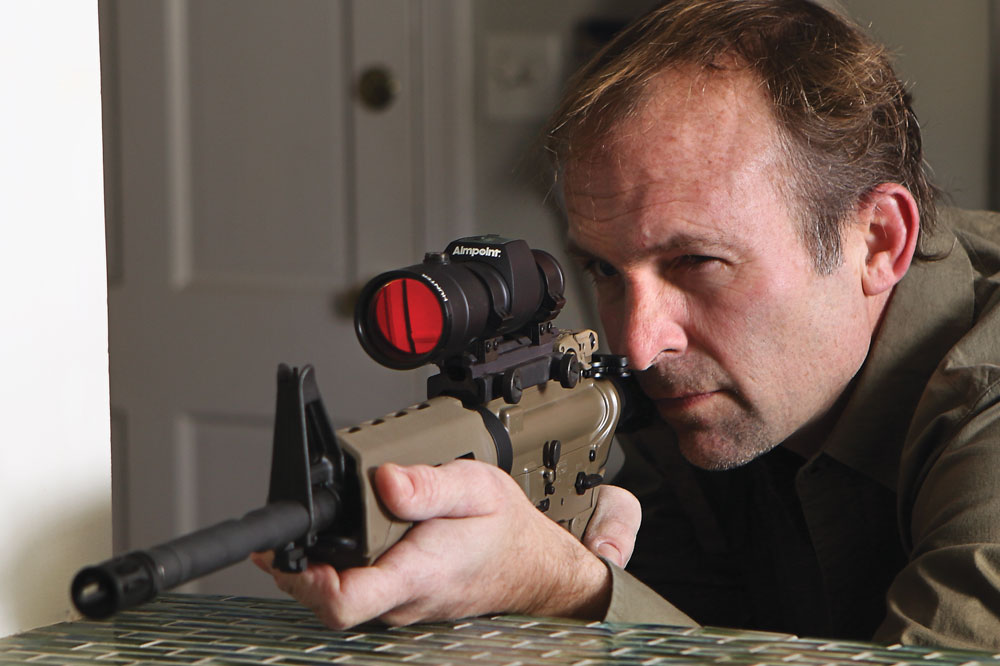 The Power To Stop

The first category to examine is stopping power. If forced to shoot, you need to stop the attacker as efficiently as possible … and handguns come up short in this category. Handgun rounds almost always require multiple hits — in the right locations — to stop an attacker. The numbers and stats you see most often in defensive pistol shootings are three and four shots fired. The only advantage of pistols is that they’re small, easy to conceal and light to carry. Inside your home, concealment is not an issue.

On the other hand, shotguns have excellent stopping power. But, even with typical defensive loads — buckshot, slugs or even birdshot — over-penetration is a major concern. Plus, no matter how good you are, surgical shots with a shotgun — for example, dealing with a hostage situation — are extremely difficult.

Rifle cartridges also have excellent stopping power, but the problem with most rifle rounds is over-penetration — except for the .223 Rem./5.56 NATO, a lightweight bullet moving at high velocity. Once that round hits anything denser than air, it begins to tumble, fragment or expand, dissipating and dumping its energy quickly.

The .223 Rem./5.56 NATO — as long as you’re not using one of the penetrator rounds designed to punch through material — will penetrate less material than most handgun, rifle or shotgun rounds. There is plenty of research on this to study, but just keep in mind there are always exceptions.

You’ll also want to avoid rounds designed for long-range shooting, which are heavier in order to maintain accuracy at extended distances. Your best bet is a round specifically designed for self-defense, which have excellent stopping power and have a very minimal chance of over penetrating. Another advantage of the .223 Rem./5.56 NATO is that it’s light in recoil, which means almost anyone in the family can handle it.

In addition to light recoil, the AR is user-friendly. Stoner was a genius when it came to ergonomics, and all the controls for the AR are in just the right place. It’s one of the easiest weapons to operate, and the AR works well for both right- and left-hand shooters — as long as you have the right techniques. My favorite ARs are lightweight, at about 6 pounds. This makes them easy to handle, especially indoors, and anyone with normal upper body strength can use it properly. Plus, you can set the AR up with adjustable stocks and other goodies, allowing you to “custom” fit it for whoever is using it. In short, the AR is one platform that will fit everyone.

One concern voiced by a lot of shooters contemplating the AR for home defense is the overall length. Try this: Have one person mount up an AR carbine with a 16-inch barrel, and have another person stand next to them holding a pistol extended out at arm’s reach. The location of the muzzles will be about the same. And if the carbine is a little bit longer, it’s more than worth it for the additional stopping power.

Still, if length is a worry, you have a couple of options. There are SBRs, or short-barrel rifles, readily available with a barrel less than 16 inches in length, but an SBR requires approval from the ATF and a fee for a tax stamp.

Today we have AR pistols. An AR pistol uses the same parts as the rifle or carbine and shoots the same rounds, but it has a short barrel — all without filing Federal paperwork, waiting on approval and paying the tax fee. Plus, with an AR pistol, you don’t have to get approval to travel out of state with it like you do an SBR. (Keep in mind that it’s your job to adhere to all local, state and federal laws when it comes to any firearm.)

All firearms for home defense should have a light on them, and the AR is no exception. The light is needed to locate, identify and, if necessary, accurately engage the threat. With the AR, this is easy: Regardless of the type handguards your AR has, there’s a mount to attach a light to it … plus anything else you want.

I’m right handed, so I prefer the light in an 11 o’clock position and as far forward as possible. This positions the light in the right place for working right- and left-hand corners, or over the top of an object. (Left-handed shooters will want a 1 o’clock mount.) I use a push-button tail cap, with momentary and constant on, and I easily operate the light with the thumb of my support hand while the rifle is shouldered.

Add a red-dot sight — and maybe a laser — and you’ve got a lightweight, ergonomic home defense weapon. Yes, you’ll lose a little velocity due to the length of the barrel, but it’s still a lot better than any handgun round, and, again, with limited penetration concerns.

The final category to think about is the psychological advantages of the AR for home defense. In the “me” category, the AR provides a warm, fuzzy feeling. I know it will stop the threat efficiently; that’s definitely a plus in the confidence department. We also can’t discount the psychological effects on the threat. I’ve seen numerous people that had pistols pointing at them and weren’t too worried about getting shot. I’ve never seen someone facing a rifle that said, “Go ahead and shoot me.” I’m sure it’s happened; I’ve just never seen it.

Equipping yourself with a firearm for self-defense is all about finding the right weapon to fit your needs. Maybe the AR isn’t for you, but don’t dismiss it without giving it serious study and consideration. When faced with a violent attacker, your job is to stop the threat as efficiently as possible. This is especially true inside your home, where avoidance or escape might not be an option. With the proper training and practice, the AR platform in .223 Rem./5.56 NATO will serve you exceptionally well.