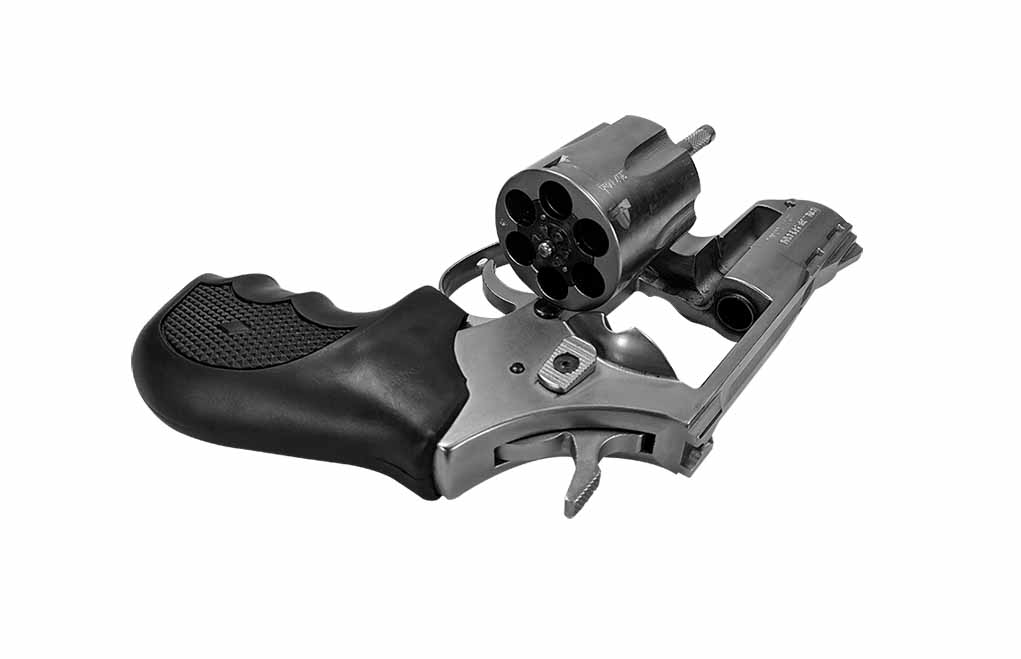 What Are The Top .38 Special Revolvers For Carry:

Conjuring images of hardboiled detectives in fedoras, there is still something alluring the .38 Special revolver. Particularly the snub-nosed variety. Among the most concealable of handguns and steadfast as a faithful dog, there’s peace of mind in the tried and true wheelie. Though, it is a bit of an anachronism at this point.

True enough, the .38 Special revolver falls short on several accounts compared to today’s semi-automatic pistols. Yet, there is a place for the handgun in modern-day concealed carry, especially at the price many solid makes and model move for today. We’ll look at some of these affordable .38 Special revolver options in a moment. But before we head there, let's touch on some pros and cons of the platform.

Why You Want A .38 Special Revolver

Revolvers, to utter the word is to conjure up the idea of dependability. There’s truth in the stereotype. Overall, the platform is among the most reliable, in double-action format generally an aim and shoot affair. A round fails to fire, simply pull the trigger again and the repeater moves on to the next round.

This isn’t to say the handgun is impervious to malfunctions. They happen. When they do the mishaps are catastrophic compared to a semi-auto pistol. Tap and rack isn't going to solve a pulled bullet or stuck case in a revolver. That said, malfunctions of these magnitudes are exceedingly rare in a fully functional wheelgun shooting good ammunition.

On top of reliability, revolvers—those meant for concealed carry and especially the snubbie .38 Special revolver—are exceptionally easy to keep under wraps. Widthwise, the guns run thicker than the average concealed carry pistol. But with a barrel less than 2-inches and an overall length that rarely exceeds size of your hand, the snub nose .38 Special revolver cuts a low profile. 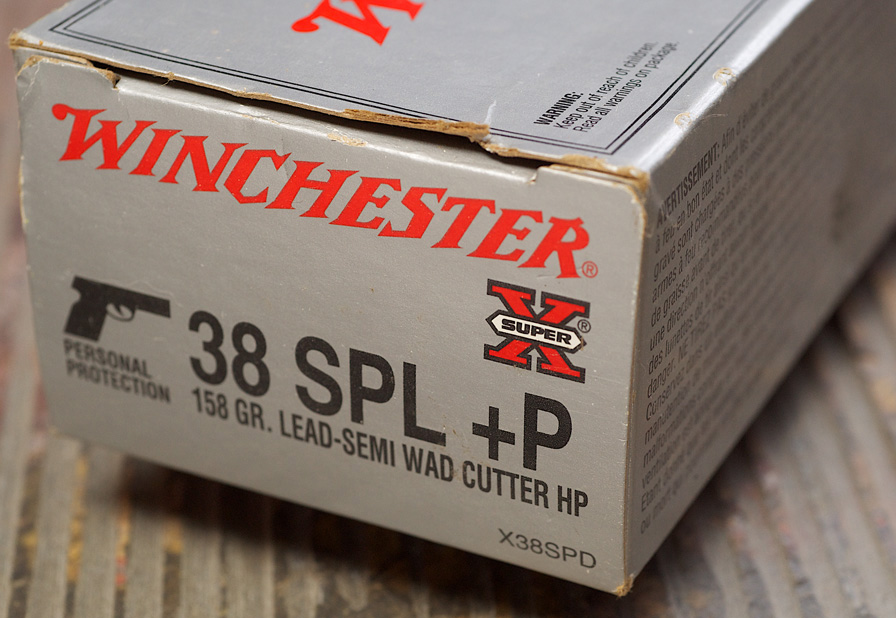 This leads to an intriguing aspect. More so than many semi-autos out there, the small wheelie is more compatible with different carry positions. If the hip doesn’t work for you, the handgun is a natural pocket pistol, carries great with a quality ankle rig and is dynamite in a belly band. Flexibility in concealment and body placement—along with its reliability—also makes the petite .38 Special revolver among the best backup guns ever set in cold steel.

Mild to shoot and deadly accurate at typical self-defense ranges, there is plenty to like about the .38 Special cartridge in and of itself. In fact, it’s among the most pleasurable to send downrange even in +P and out of small revolvers. When you’ve seen a shooter struggle to keep a .357 Magnum or even the 9mm out of light pistol consistently on target this advantage becomes clear. Round placement is the key factor in neutralizing a threat. Most can place rounds with a .38 Special.

Why You Don’t Want A .38 Special Revolver

Picking up where we left off, there is a downside to the caliber—its terminal ballistics. Long ago, due to its performance through barriers—particularly sheet metal and windshields—the FBI deemed the .38 Special unfit for service. Incidentally, these tests (the post 1986 Miami Shootout ballistics testing project) also eliminated the 9mm—which the bureau now carries (go figure). So, don’t expect to pack a thunderclap, especially out of a snubbie .38.

That said, with the right ammo the revolver performs. The key here is finding the right ammo, which means doing your homework to hound dog a round that consistently penetrates and expands. Don’t think this is an exercise exclusive to the .38 Special. Any caliber and handgun requires due diligence. Though, given the lower velocity at which the cartridge operates, acceptable options might not be as clear cut as they would be in, say, .45 ACP or .357 Magnum.

Additionally, the .38 Special revolver doesn’t have much ammo on tap. Concealed carry models, five rounds is the norm, though there are 6-round options. Walking hand-in-hand with capacity is reloading. Suffice to say, the process is neither as fast nor as simple as with a semi-auto pistol. 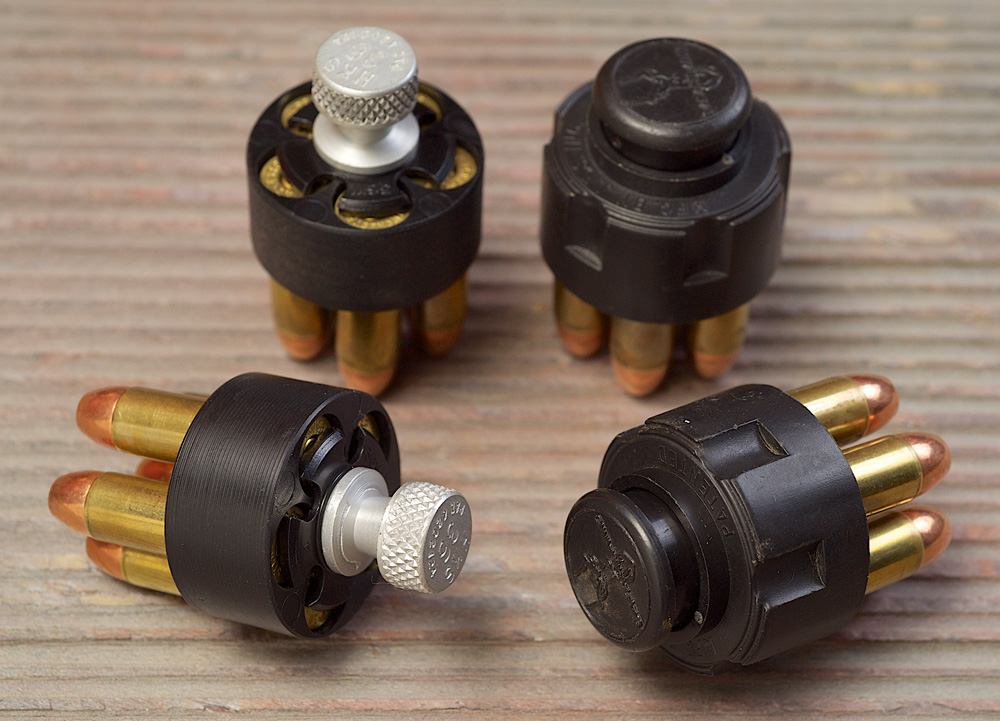 Speedloaders save time and get a revolver back into a fight more quickly than without. But even with an aid, the procedure takes a fair amount of fine motor skills and a cool head. Adrenaline coursing through the veins, both will be in short supply in a lethal-force encounter.

Finally, when it comes to challenges, there’s the revolver’s trigger. As previously mentioned, double-action triggers have advantages, but for those unfamiliar with them accuracy enhancement isn’t one of them. DOA triggers are heavy, making it difficult to hold on target through the break. It takes practice, plenty of it—with a bit of hand strength—to master this aspect of the revolver.

It’s worth a brief word as to the stipulations for this list. There are four criteria which we used to choose .38 Special revolvers:

Reliability: The guns are well made with a reliable track record.
Concealability: We’re looking at concealed carry revolvers, in turn, we’re sticking with snub-nose .38s.
Price: Aiming at the more affordable end of the market, we’ve set the ceiling at a $600 MSRP, which should give nearly every shooter access.
Accessibility: All the models are currently in production, thus found at most gun retailers. Since its introduction, the Model 642 has been a favorite among armed citizens, blending all the assets shooters expect in a Smith & Wesson. Chief among these is performance. The Massachusetts gunmaker turns out quality handguns that over the years have earned the reputation for reliability and accuracy.

Boasting an aluminum alloy frame, the “Airweight” is among the lightest options (14.6 ounces) in its class. The .38 Special revolver is also no bigger than a minute. Measuring in at a tick over 6-inches in overall length, the 642 opens a wealth of possibilities in carry style and position.

A concealed hammer and integral rear sights make the 5-round revolver a smooth draw and +P rating helps it pack a punch. But, keep in mind, this option is strictly double-action-only handgun.
MSRP: Starting at $477; smith-wesson.com The LCR has won accolades for its concealability. For a good reason, Ruger’s carry-tailored .38 Special revolver is small, light and easy to keep under wraps. However, the 5-round wheelie has some other overlooked and highly desirable aspects. Perhaps A-No. 1, the +P-rated revolver’s fantastic trigger.

While the LCR’s pull is still long and heavy compared to semi-auto pistols, it's about as smooth as they come from the factory and is nearly impossible to stack. This goes a ways in improving the DAO revolver’s accuracy and makes it a solid option for those just learning the platform.

In addition to this, Ruger has engineered a level of customizability into the gun not found in many other revolvers. These include a swappable pinned front sight and an easily exchangeable grip system.
MSRP: $579; ruger.com 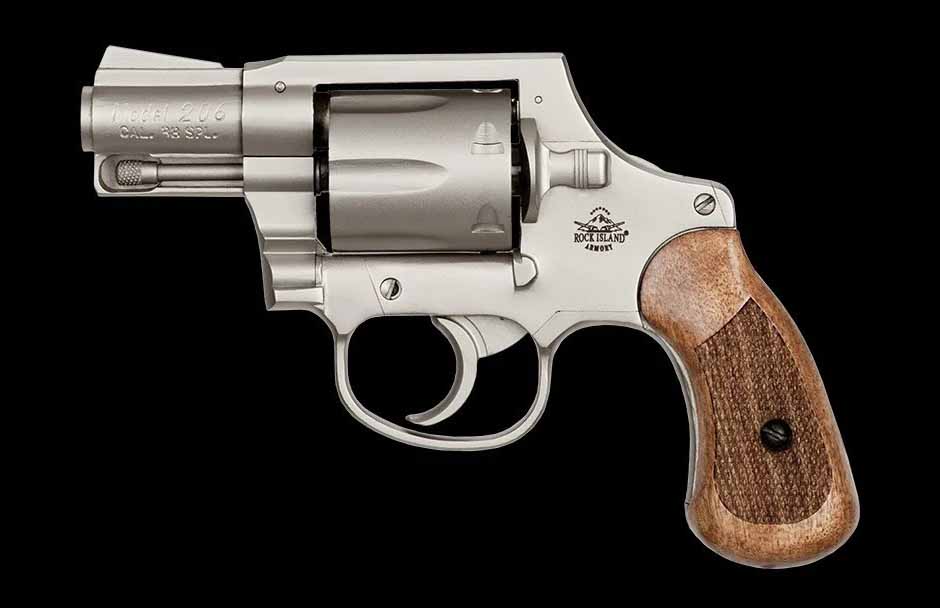 Better known for its economical 1911s, Rock Island is also a competent revolver-smith. Look no further than the M206 for proof. Classical in design (somewhat reminiscent of a Colt Detective Special), the spurless .38 Special revolver adds a touch of aesthetics to its solid and dependable performance.

A bit heftier (24 ounces) than many modern snubbies, its carry position might be a bit more limited for most. Yet, the extra weight makes the 2-inched barrel M206 an absolute kitten to shoot, thus improves its accuracy potential, particularly shot to shot. Fairly standard fare, the gun comes with a ramp front sight and integral rear sight, and it boasts a desirable 6-round cylinder.

Now to a bit of controversy. The revolver’s literature and rollmark list it as a .38 Special, not +P. However, Armscorp claims you can run a limited amount of the higher pressure ammo through the gun. It’s a gray area for sure, one that makes some uneasy about using +P ammo in the gun at all.
MSRP: $492; armscor.com 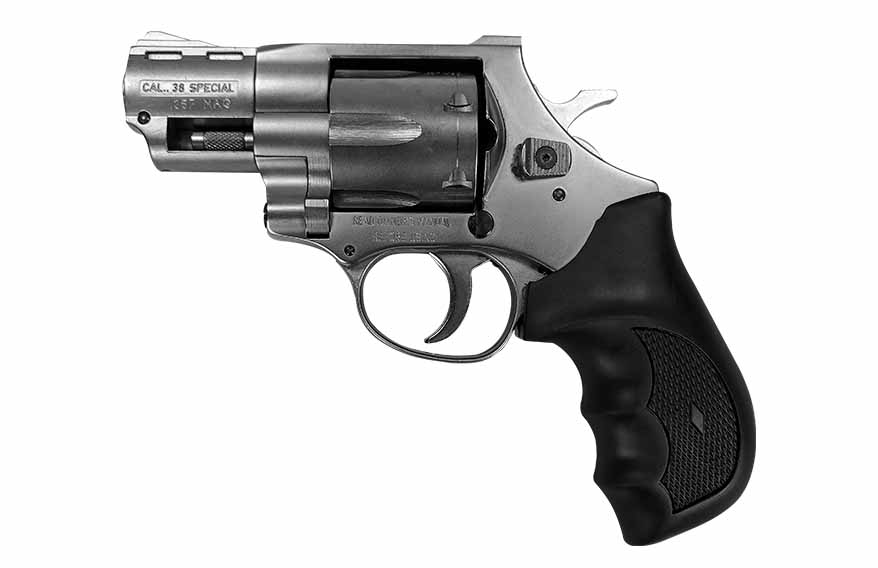 Outside the air gun world, Weihrauch isn’t a well-known name in America. However, the German gunmaker has a long tradition with revolvers, particularly those aimed at self-defense. And in recent years has offered one on the U.S. market—the Windicator.

Imported by European American Armory, the .38 Special revolver is fairly spartan. At the same tick, the 6-round wheelie is well made, dependable and concealable. Overall, not a bad mix.

The gun is among the heaviest on this list at an ample 1.7 pounds. That said, like any heavier gun it tames the already mild .38 Special considerably, improving its shot-to-shot accuracy.

Notably, the gun has an exposed hammer and spur, which give you the best of both worlds—single and double action. The former is much preferable to the latter, with the Windicator’s DA pull very heavy in compared to its American counterparts.

Though don’t let this scare you off, the gun still proves a great value and reliable. What else could you want from a concealed carry revolver?
MSRP: Starting at $345; eaacorp.com 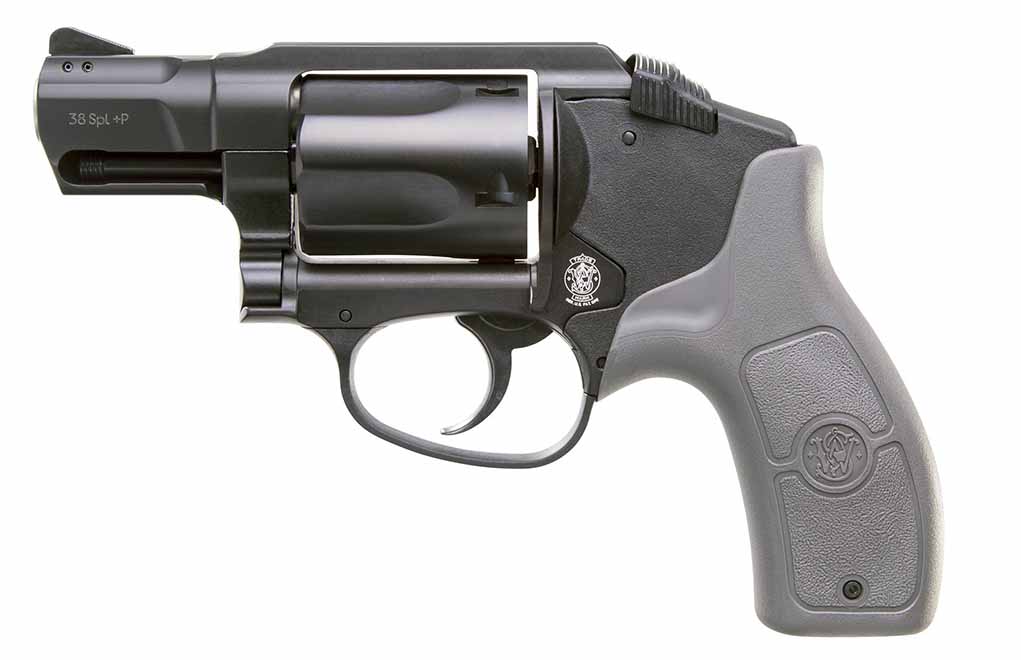 “Tactical revolver” sounds like an oxymoron but is what Smith and Wesson pulls this off with its M&P Bodyguard 38. Lightweight and configured to optimize manipulation, the .38 Special revolver is a marked break from S&W dogma … but works. In particular, Smith & Wesson moved the cylinder release from the left side to the rear of the frame, making it ambidextrous and giving shooters greater access during reloads.

Additionally, the gunmaker has dehorned every square inch of the 5-round revolver, ensuring it draws smoothly and without a hitch. Aiding in this is a low-rise ramp front sight and smoothed stainless steel cylinder.

Utilizing an aluminum alloy, the Bodyguard 38 comes in at a scant 14.4 ounces, making it acceptable for almost any conceivable style of carry. And a +P rating gives the handgun added punch.
MSRP: Starting at $402; smith-wesson.com As far as .38 Special revolvers go, the 856CH isn’t going to win any beauty contests. (What concealed carry snubbie is?) But it will perform when you need it to, which makes it an attractive option.

Part of the rebooted 856 line, the CH features a DAO spurless hammer, cutting down the gun's overall profile. It’s very reminiscent of the Taurus 85, but with one major difference—the 856 carries 6 rounds, as opposed to 5.

Boasting an aluminum-frame and carbon steel 2-inch barrel and cylinder, the revolver tips the scales at a flat 1-pound. It’s a nice middle ground, enough weight to tame +P ammunition, but not too much to make the gun cumbersome.
MSRP: $364; taurususa.com If concealability is at a premium, the Off-Duty is the answer. Among the smallest and lightest .38 Special revolvers available, the minuscule wheelie is a second thought to tote. Even better, if you’re looking for a back-up gun, the revolver was practically made for this duty.

Boasting an aluminum-alloy frame (stainless steel barrel and cylinder), the revolver tips the scales at 12 ounces, which is somewhat a blessing and a curse. On the one hand, the revolver is an absolute second thought to tote and can be carried anywhere. As far as pocket pistols go, it’s a knockout. The flipside, even the tame .38 Special can make the light gun hop in your hand.

Charter Arms mitigates some of this with a contoured, rubberized grip. Your pinky will hang, but overall it gives you good control over the revolver. As to other assets, it’s streamlined, with an encased hammer, so snags aren’t a worry. And the Off-Duty is quick to manipulate with a left-side cylinder release.
MSRP: Starting at $420; charterfirearms.com