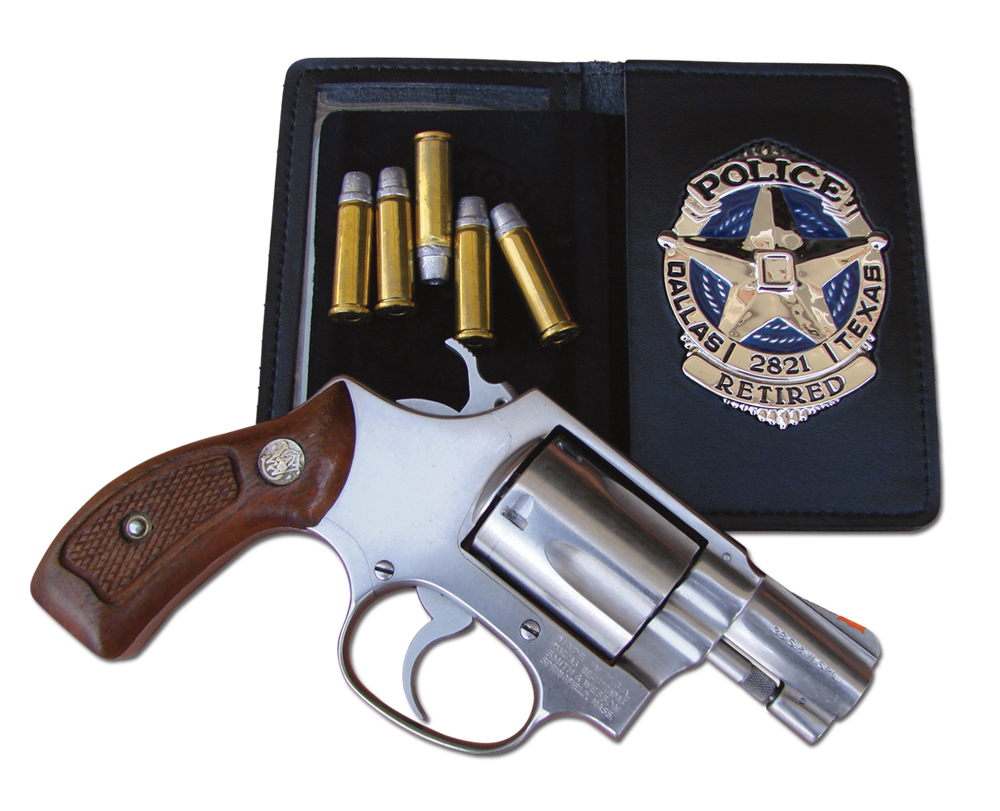 A retired detective reflects on what it really takes to shoot a .38 snubnose revolver.

Unfortunately, an inexperienced shooter often buys a snubnose as a first handgun, a decision that is usually a mistake. For several reasons these guns are best utilized by experienced handgunners. The small size, low weight and very short sight radius serve to amplify a shooter’s lack of skill. This often leads to an unfair evaluation of the snubnose as being inaccurate. A larger, heavier revolver is more forgiving in terms of an inconsistent grip, less-than-perfect trigger control, recoil and recovery from the same. Also, the greater distance between front and rear sights allows for slight errors in sighting that affect a bullet’s point of impact far less than with a 2-inch barrel.

A ruler and a postage scale indicate there is not a great deal of difference between the Colt Detective Special and the Smith & Wesson Chiefs Special. However, the fingers, hands and extended arms of many shooters indicate otherwise. Colt stocks (call them “grips” if you wish) are somewhat larger than the more compact and more easily concealed round-butted J-frame stocks. Many find the Colt’s to be more comfortable for shooting. For years, S&W marketed an optional square grip frame on the Chiefs Special for this reason. Some aftermarket stocks were made large; a Chief so equipped was easier to shoot but more difficult to conceal.

Snubnose revolvers have considerably more recoil than their larger and heavier counterparts. However, it is tolerable, particularly in the all-steel guns, and with standard pressure ammunition rather than +P cartridges. The lightweight models are, of course, less comfortable to shoot. Double-action trigger pulls are fairly heavy, but can be well managed with practice. Some shooters make the mistake of trying to fire too many rounds during one trip to the range. Any shooting after fatigue sets in is a waste of time and ammunition, and snubnose .38s provide a shooting workout; they are not plinking guns. One box of ammunition expended per session is plenty.

Regarding ammunition, the choice for use in a snubnose .38 is a bit more critical than it would be for a larger revolver. Sights are reportedly regulated for heavier bullets at standard velocity. I’ve found this to be roughly true, mostly at distances of 15 to 25 yards. Many snubnose guns shoot the popular lighter bullets (110-125 grains) low, often six to eight inches low at 15 to 25 yards. For defensive use that may be tolerably close, but ultimately that’s a decision for the shooter. At very close ranges, however, it’s of little consequence.

The argument with respect to the use or non-use of +P ammunition in snubnose .38s will likely go on forever. Most self-anointed Internet “authorities” should be considered unreliable sources. The best suggestion for one advocating the use of +P in a particular revolver is to simply contact the gun manufacturer to find out if the product is rated for such ammo. Velocity suffers in short-barrel firearms and sometimes the difference between standard-pressure loads and +P is not as great as some would like to believe. Also, whether +P or not, many hollowpoint bullets cannot be depended upon to reliably expand at modest velocities.

While not often mentioned, it would be a wise move to select at least three or four commercial loadings for evaluation. Shoot at 15 and 25 yards and stick with whatever provides the best combination of accuracy, closeness of point of bullet impact vs. point of aim and acceptable recoil. A secondary consideration should be +P or standard. It’s better to hit with standard-pressure ammunition than to miss with +P.

Other important factors sometimes ignored are muzzle flash and fast recovery from recoil. Snubnose guns can produce considerable muzzle flash, which can often go unnoticed except in very low light situations. The flash, coupled with recoil can hinder recovery for subsequent shots. Some ammunition makers advertise products that produce less recoil and lower muzzle flash. These would certainly merit consideration when making selections.

As for shooting practice with a snubnose revolver, some advocate practicing at very close distances simply because, “It’s a snubnose and you can’t hit anything with one anyway.” There is little or no benefit in practicing at three, seven or 10 yards. Granted, most defensive shooting incidents occur at very close range, but shooting targets at such distances does little to improve one’s shooting skills. It does, however, serve to hide a shooter’s shortcomings. At 15 and 25 yards one’s deficiencies become blatantly evident. Learning to shoot and practicing at the longer ranges eliminates the need for practice at shorter distances, other than to check point of impact vs. point of aim.

Laser grips, night sights, fast reload devices and other gadgetry can be found useful to varying degrees, but like the snubnose .38s, such accessories are not for beginners. A wise decision would be to expend available funds on ammunition and range practice to the point that shooting basics become ingrained. If a burning desire for aftermarket gizmos goes unquenched after shooting skills are mastered, only then should optional equipment be considered. This approach works out much better than the other way around. Regardless of the ads and sales gimmicks that serve to sell merchandise, none of the products being hawked will transform an inexperienced handgunner into a proficient one.

Depending on one’s needs a holster may or may not be a necessary acquisition. However, a holster may be required for a concealed carry qualification course. A big advantage of a snubnose .38 is the fact that it can easily be carried concealed on a person without the use of a holster and instead in a coat pocket, waistband, etc. Of course, some may not “carry” a gun at all, instead preferring to have one within reach.

I was a vice detective for many years. Such an assignment was (and probably remains) 100 percent undercover work. A handgun not only had to be small, but well concealed to the point that the carrier could pass a cursory (fortunately sloppy!) pat-down search by some street hustler. Holsters are of little use for such duty. I tried an ankle holster briefly but found it worthless due to pain from prolonged wear.

Most of the time I carried a 2-inch Smith & Wesson Chiefs Special as it came from the box. A brief trial with aftermarket rubber grips may have made the gun a bit easier to qualify with, but added to overall bulk. With no regret, I replaced them with the original tiny S&W wood stocks.

What about grip adapters? While these items have enjoyed a renewed popularity in recent times, I question whether it’s from actual usefulness or simply a fad. They do add an appealing look to many revolvers and there are claims that they provide a better grip. That may be true for some shooters. My experience with grip adapters has been on J-frame S&W revolvers only and my conclusion is one of indifference. However, since they are on the inner frame area (rather than the outer), they add almost nothing to the overall bulk of a revolver.

Never did I feel undergunned or find a snubnose Chief lacking in any way. Most of the detectives I worked with were similarly armed, though a few carried Colt snubnose guns. I’m unaware of any shooting incidents involving vice detectives where bad guys got up and ran off after being struck by anemic bullets fired from short-barrel .38 Special revolvers.

Speedloading devices have been around for years. Some like them; others can’t see a need. Depending on several factors, they are often too bulky for adequate concealment. In my experience, the time and effort required for familiarization and practice with such implements is about the same as that necessary to master fast manual loading.

Glow-in-the-dark “night sights” and laser grips may have a place in the specialized niche of snubnose .38s if used by experienced handgunners. Mistakenly, like the unskilled rifleman who thinks a light trigger pull and a high magnification scope will offset his shortcomings, revolver sighting contraptions are not learning tools. It’s also important for a shooter to remember that reliance on any device requiring battery power to function can easily become a liability at the worst possible moment. Again, money for such items, especially for the beginner, is far better spent on ammunition and learning to shoot well.

While I am a snubnose .38 enthusiast and have had long experience with them, I sincerely hope that no one has been led to believe that the small-frame Colt and Smith & Wesson revolvers are the best choice for any situation requiring a handgun. Far from it. These guns are specialized tools and are perfectly adequate for their designed purpose. Despite technological advances over many years, the usefulness of the small-frame snubnose .38 is no less now than it was generations ago.

This article is excerpted from Gun Digest 2015. To get your copy click here.