The evolution of the concealed carry gun continues. These are some of the hottest new CCW handguns for 2018.

What are the hot new handguns this year for everyday carry?

The biggest segment of the firearms market is that of concealed carry handguns. In recent years, the number of ordinary citizens who carry a handgun as everyday practice has expanded almost exponentially. Not only are more people carrying, but people who never previously considered firearms ownership are now committed concealed carry citizens.

The result of this paradigm swing is a booming market for effective concealable guns, and the industry has done an admirable job of filling that niche. At one time the choices for concealable handguns were small revolvers, pocket-sized .25s and somewhat antiquated .380s. Now we have reliable 9mm semi-autos that weigh only a few ounces more than those diminutive, awkward and underpowered .25s.

It’s a fact that in today’s market, it’s harder to find a bad handgun than a good one. Polymer frames, modern manufacturing techniques and an industry that pays attention to the market have allowed lots of good choices to those who’ve decided to take an active part in the defense of themselves and those they love. We now have so many excellent designs that the current effort is to improve and refine those excellent designs. Clearly the most popular concealed carry handgun in America by sales is the Smith and Wesson Shield. It’s affordable, reliable, compact and chambered for the most popular self-defense calibers. It’s offered both with and without a manual safety to accommodate both schools of thought. As an overwhelming success, it’s no wonder Smith and Wesson has upgraded it with the same 2.0 features as the double-stacked M&P series.

I don’t subscribe to the mindset that defensive handguns should have light and crisp triggers, but it’s important that the trigger be both safe and manageable. The common complaint with the earlier Shield was a less-than-precise trigger with an indistinct reset. The 2.0 series has rectified the issue of trigger reset. It’s now much more positive and tactile with the added bonus of a crisper and more defined break. Add the much improved grip surfaces and already excellent sights and you have a defensive handgun that fits almost every need. With two magazines, MSRP is $479 and $649 with the Crimson Trace Laserguard Pro laser/light option. 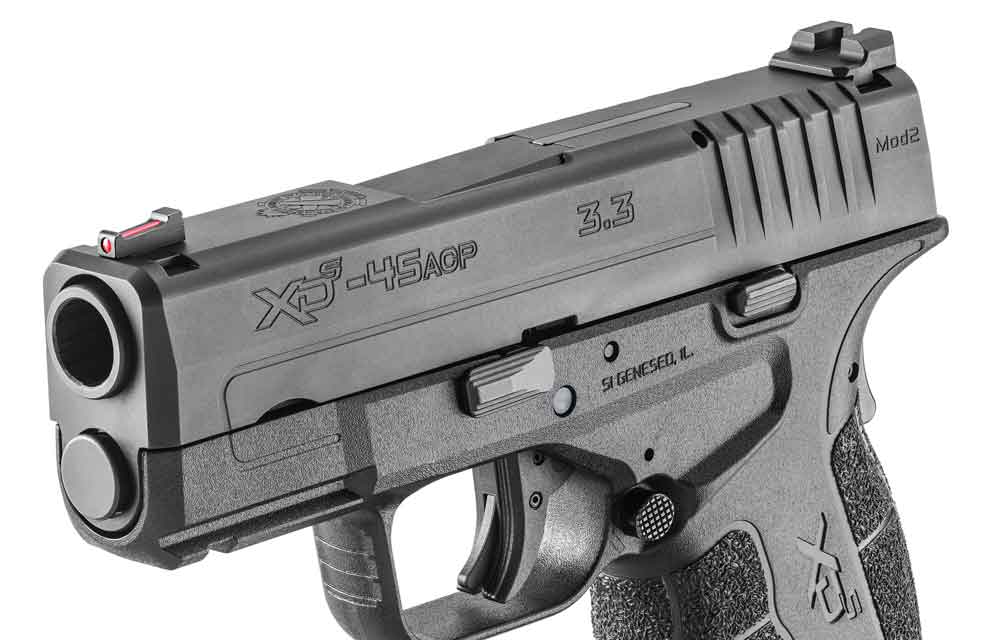 Since its inception, the Springfield Armory XD series of pistols built in Croatia has had a very strong following. The single-stack compact XDs series has found favor with concealed carry citizens because it’s easy to conceal and easy to shoot well. I particularly like the grip safety. There’s a massive difference of opinion on whether defensive guns should have manual or passive safeties, and the passive grip safety on the XD series is almost unique in polymer striker-fired pistols.

The new XDs Mod.2 extends the line, incorporating the refinements of the Mod.2 series with the power and penetration of the revered .45 ACP round. The undercut trigger guard and improved grip shape allow the shooter to grip higher, meaning better recoil control, and that’s augmented with the upgraded Grip Zone grip texturing.

The sights have been improved as well with the addition of a tritium front sight and a serrated U-notch rear sight that allows for using the front of the rear sight to rack the slide against a solid object. The trigger is also enhanced for a shorter reset. It comes with two magazines, one flush-fit five-round mag for concealability and a six-round backup magazine. The overall weight is 21.5 ounces with the flush magazine, and MSRP is $593. Certainly, the most innovative new concealed carry handgun, and probably the most unconventional handgun in several years, is the Bond Arms Bullpup 9. It’s based on the Boberg XR9-S, an innovative but somewhat expensive and problematic pistol developed in 2003. In function, the Bullpup 9 is a remarkable departure from conventional semi-automatic pistols in that the magazine feeds from the rear instead of the front. The system uses a rotary barrel lockup with the barrel rotating on a cam similar to that of an AR-15 rifle bolt inside the bolt carrier.

The pistol feeds from a magazine located below the chamber in the barrel, with the round coming from the magazine much like a tubular fed firearm. Instead of the magazine spring pushing the round backward, there are a pair of tongs similar to a conventional extractor that strip the magazine rearward, and a lifter then positions it for the slide to carry the round into the chamber as the recoil spring brings it back into battery.

The obvious advantage of this is the short overall length in relation to barrel length. For example, a 3.3-inch barreled Springfield Armory XDs has an overall length of 6.3 inches and the Bullpup 9, with a barrel length of 3.35 inches has an overall length of just 5.1 inches. Another advantage of the Bullpup 9 is an extremely light operating spring. As the slide pulls the round rearward out of the magazine, it creates resistance to the slide’s travel. This additional resistance to the slide allows the use of a much lighter spring than would be normal for the weight of the slide in a 9mm pistol. The result is a slide that’s remarkably easy to cycle, which is an important issue for users with lower hand strength.

With a weight of less than 19 ounces and a thin profile, the Bullpup 9 is an attractive option for concealed carry. The trigger system is double-action-only, providing second-strike capability. Sights are dovetailed three-dot; grips are engraved laminated rosewood. It comes with two magazines and has an MSRP of $977. One of the most respected and successful handgun designs has been the 1911. In recent years there have been miniaturized versions of the 1911 design, and they’ve found favor with concealed carry citizens. Springfield Armory now has its own version of a reduced 1911 in .380 ACP. The 911 uses a T6 aluminum frame with a Black Nitride or stainless 416 slide. Grips are G10 with texturing on the front strap and mainspring housing.

The ambidextrous safety differs from the 1911 design in that it allows racking the slide to charge the chamber while the safety is engaged. The single-action trigger combined with a G10 Hogue trigger shoe allows a light and crisp trigger break. Sights are a green tritium front sight inside a yellow luminescent circle and a tactical rack rear sight with green tritium inside of white luminescent circles. It comes with a six-round flush magazine and an extended seven-round magazine for backup. MSRP is $599 for the standard version and $789 with an integrated green Viridian grip laser. While all the above have been performance enhancements to existing models, Ruger’s EC9s is an economical enhancement. The Ruger LC9 went through an upgrade in 2011 with the introduction of the LC9s, an enhanced version that featured a striker-fired instead of a hammer-fired action and had a much better trigger. The LC9s has eclipsed the earlier version, and it’s been dropped from the catalog. While the standard LC9s has an MSRP of $449, the EC9s has an MSRP of $299.

Primarily, besides the price, the difference between the EC9s and the LC9s is the sights. In the original version, the sights were dovetailed into the slide and the EC9s has sights that are integral to the slide. Currently, the Ruger website no longer shows the standard LC9s but lists a collection of standard guns with different color schemes specific to different distributors. Smith and Wesson’s M&P line has been extremely successful and the 2.0 upgrade makes the series even better. Recently, the company introduced the M2.0 Compact, bringing functional, much-needed upgrades to an already excellent firearm. Depending on your carry method, the M&P9 might be a bit large for daily concealability, but it’s certainly a viable option if it fits your lifestyle.

The improvements in the M2.0 series corrected issues that kept a good pistol from being an exceptional pistol. The ability to properly grip a pistol increases both first-shot effectiveness and speed in delivering fast follow-up shots, and the new aggressive texturing on the grip is a vast improvement. Competitive shooters who use the M&P pistols universally modify their guns to make them easier to grip by stippling or adding aggressive panels. The new grip surface negates that need. The other complaint with the M&P line has been in the trigger reset, and that’s also been corrected with the bonus of a lighter pull weight and crisper break. Four interchangeable inserts make it possible to fit any hand. MSRP is $569. There’s a hot market for concealable 9mm pistols, and recently there have been two schools of thought: One school of thought is that a slim and lightweight gun is a better choice because of comfort and concealability; the other places more importance on magazine capacity. Both camps have reasonable reasons for their preference, but both will agree the other’s position is realistic.

Just revealed at SHOT Show is the Sig P365, a gun that reasonably will accommodate both groups. With a slight trade-off in width, the P365 provides 10-shot capacity with a 1.06-inch width and a weight of just 17.8 ounces. Described by Sig as a Micro Compact, it’s a polymer-framed, striker-fired gun that easily fits into the standard for small 9mm pistols. It has a stainless-steel, Nitron-finished slide and barrel and three-dot Tritium sights. Grips are interchangeable for better purchase and upgradable for a laser.

The trick is in a magazine that’s tapered, wider at the bottom and tapering off to a single-stack magazine width. Magazines are available flush and with an extended floor plate to provide a full grip. It also comes with a 12-round magazine for backup. MSRP is in line with other compact nines at $599.