The Remington New Mexico AR from Remington's Law Enforcement division is a capable rifle that can meet a variety of needs.

At its annual new products media seminar held this past October, Remington and Remington Law Enforcement showed off its latest AR-15 rifle, the R4 New Mexico, a rifle made for a law enforcement agency located in the state of the same name. “Oh, another AR,” I thought. “Uh-huh.” I didn’t yawn. Yet, the truth is, it’s pretty tough for me to get excited about yet another AR in a firearms world (and market) already awash in AR-15s.

But something in the New Mexico’s spec sheet did catch my attention: a barrel twist rate of 1:7.

I regularly use the .223 Rem./5.56mm for deer and hog hunting and have taken a good number of each animal with the round, including a 310-pound West Texas boar. The AR-15 will do the job—but not if you’re flinging 45-grain varmint loads out of the barrel. 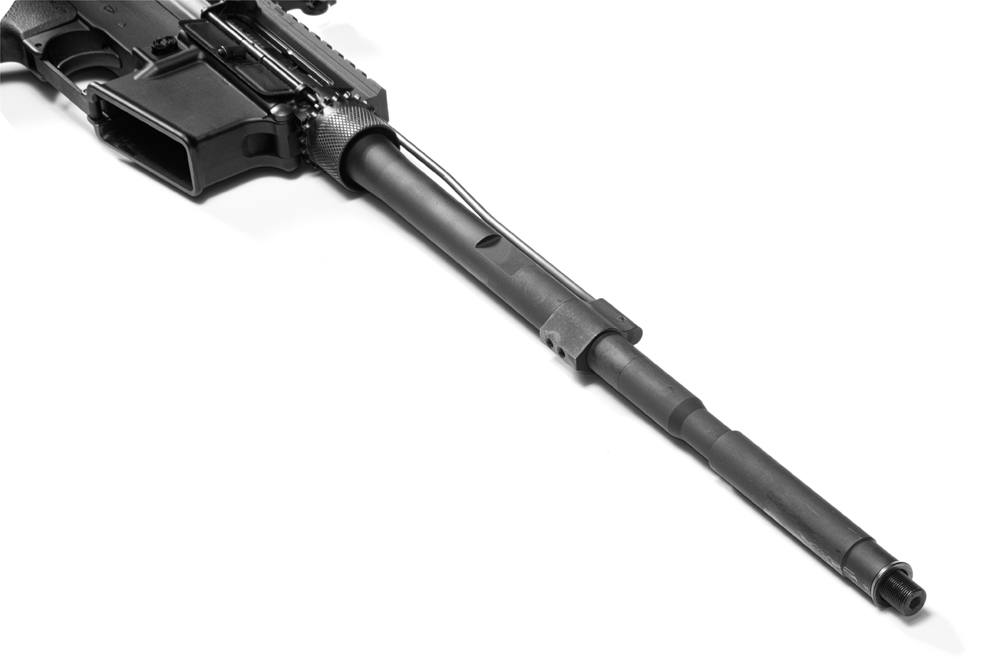 For deer- and hog-sized game, I find solid bullets between 62 and 79 grains work best. But these heavier, longer bullets require barrels with a twist rate of 1:7—not the 1:8 and 1:9 that tend to be the norm—needing the faster twist rate to stabilize. You can fire these stouter bullets in barrels with 1:8 and 1:9 twist rates, but they are less accurate; in some cases, I’ve had these bullets tumble in flight, leaving keyholes in paper targets.

So, because of that 1:7 twist rate, I took a closer look at the New Mexico, liked what I saw, and asked Remington for a production unit for testing and evaluation. The rifle arrived in December 2016. Ready to Hunt
The New Mexico comes standard with Troy Battle Sights, front and rear. I removed them and installed an optic on the rifle, a new EOTech Vudu 1-6x24mm, a compact, first focal plane scope with an illuminated BDC reticle.

I was leaving for a hunt soon and wanted to take the New Mexico, so my initial time with the rifle was simply getting used to it and zeroing it for the hunt. Zeroing was very easy, first at 50 yards and then onto the 100-yard targets. Within a few shots, I was placing rounds at or near the bullseye.

The hunt consisted of five days in the Mississippi Delta, mostly from enclosed stands. I did a good deal of walking to the various stands, toting the New Mexico on a two-point sling. The rifle was an easy carry at about 6.5 pounds, and its compact size made it a nice fit inside the stands. It rained over half the time, and the Mississippi Delta was a regular mud fest. So I hunted with a wet and muddy rifle more often than not, and that provided a good, if unintended, field test for the hard-coat black anodized finish on the receivers and the barrel’s manganese phosphate parkerized finish. Wet or muddy, all the New Mexico required was a quick wipe down and it was ready to go. I found no rust anywhere on the outside of the rifle, even after being home a couple weeks and (having forgotten to care for the rifle) finding it in a gun case with dried mud splattered from flash hider to the front half of the handguard.

I took two deer with the New Mexico, one at 212 yards, the other at 242 yards. Both were whitetail does, right around 100 pounds each, and both dropped to through-and-through lung shots. I was impressed with the rifle’s accuracy and utility as a hunting weapon. At the Range
Back home in Wisconsin, I took the New Mexico to the range for a more thorough examination. For accuracy testing, I selected three brands of .223 Rem. ammunition: Federal Premium Vital-Shok with a 62-grain Trophy Bonded tip; Fusion MSR and its 62-grain solid bullet; and Remington Hog Hammer, launching a 62-grain Barnes TSX bullet.

I also brought along a couple .223 Rem. ammo brands loaded with lighter bullets to see how these performed, too.

I shot from a sandbagged rest at 100 yards, outside; the temperature stayed right at 38 degrees Fahrenheit, with no breeze, and an overcast sky.
My very best four-shot group came in at 0.54 inch (measured with my Tool Shop electronic calipers) using the Fusion MSR. The best five-shot group was 0.61 inch with the Remington Hog Hammer.

After I was done with the various 62-grain loads, I also tried out Hornady’s Superformance with a 53-grain V-MAX bullet and pegged five-shot groups of 0.80 and 1.53 inches. Horandy’s Full Boar load with a 50-grain GMX bullet produced 0.95- and 1.20-inch groupings.

From beginning to end, accuracy was outstanding, and I was most impressed with the last two groups with the Hornady Full Boar. By this point, I had fired over 120 rounds through a barrel that hadn’t been cleaned by me, ever. The barrel itself was hot enough to blister the skin. I was nearly two hours into the evaluation, so I wasn’t at my sharpest, either. And the very last five-shoot groups were still right around 1 inch. That’s some accuracy from a semi-automatic rifle with a 16-inch barrel.

In all the shooting I did—hunting and at the range—I never had a jam, a failure to fire or a failure to extract. The bolt stayed open at the end of every magazine.

The trigger is standard Mil-Spec, but at the higher quality end of Mil-Spec. I’ve used other Mil-Spec triggers that felt like a small file being pulled across sandpaper. Not so here. The trigger on the New Mexico snaps off very cleanly and pops back into the firing position quickly, with little to no overtravel. Some may still want to install an after-market trigger, and that’s fine, but most shooters will do fine without that addition. 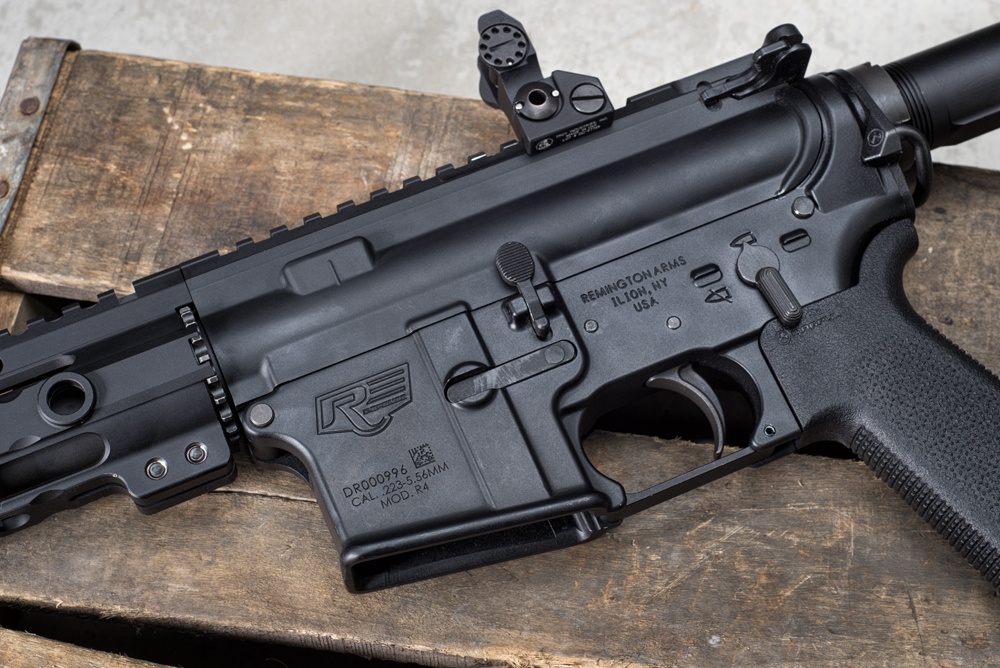 LE Roots, All-Around Versatility
Remington Law Enforcement (LE) made the New Mexico on a contract with the New Mexico State Patrol after that agency did its own extensive testing with several AR’s.

“They wanted the reliability and the heart of the Mil-Spec AR-15 platform,” said Robin Eaves, of the Remington LE Division’s sales department. “But they wanted it to be lighter and slimmer than many of the ARs currently on the market —more of a ‘one-size-fits-all’ AR for a police force made up of hundreds of individual troopers.”

Much of that was achieved with the use of the SSK 12 mid-length Keymod rail system made by Midwest Industries, plus a Magpul Slim line stock and grip. Other features include a 16-inch M4 profile barrel, made of 4150 CMV steel. The chamber and bore are chrome lined, and the full-auto-rated bolt carrier group has a properly staked gas key. The New Mexico uses a carbine-length, direct impingement gas system and a low-profile gas block. Though the New Mexico was made for law enforcement, anyone can purchase the rifle as long as they go through a Law Enforcement firearms dealer or distributor. LE officers can buy a New Mexico at a substantial discount. Eaves added that other LE agencies are now looking at the New Mexico as their duty rifle, too.

For law enforcement, hunting or recreational shooting, a shooter will find a very accurate and extremely reliable rifle in the New Mexico. It’s a rifle that will protect an officer on duty, punch paper and bring home the wild bacon (or venison), too.