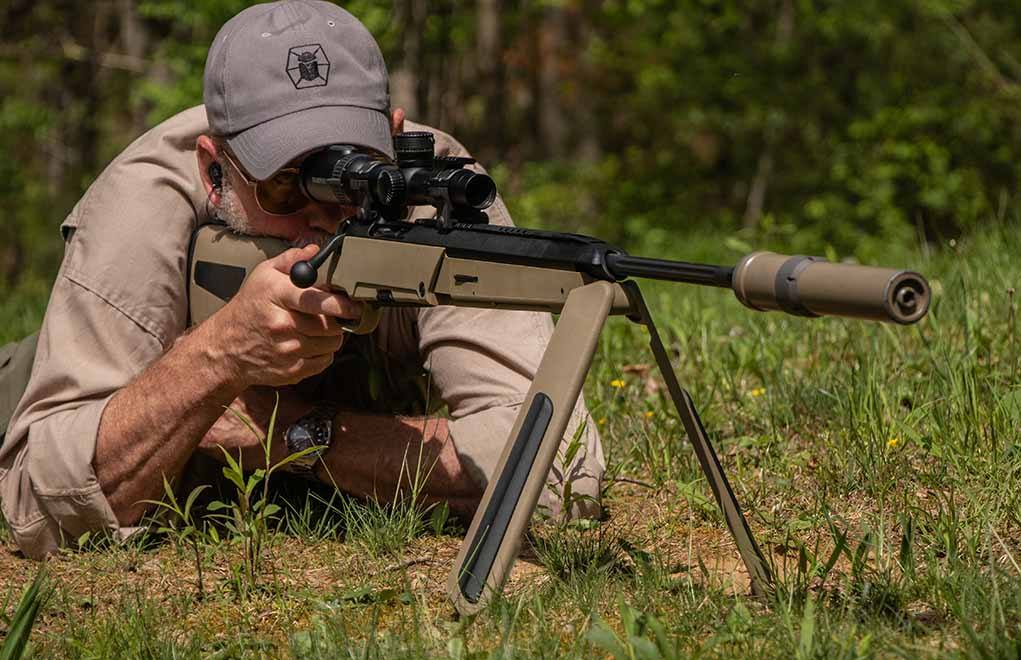 The 6.5 Creedmoor has swept the rifle world, but is its performance up to snuff in the multi-purpose Steyr Scout rifle?

Why The Steyr Scout Rifle Beat Others In This Class:

The Steyr Scout Rifle has been around since late 1997. It was inspired by former Marine Lt. Col. and American Pistol Institute (now known as Gunsite Academy) founder Jeff Cooper. Steyr followed a codified blueprint established by Cooper. Its goal was to build a rifle complying with his notion of what an ultra-handy, general-purpose rifle should be. Cooper believed in the one-rifle concept, offering that while it might not be perfect at everything, it was capable of doing just about anything.

When introduced, the Steyr Scout Rifle had a suggested price north of $2,000. That was a bit steep for everyone except Cooper’s followers and those who bought into the concept of a one-rifle battery. Ultimately, the rifle would also be offered in .243 Winchester, 7mm-08 Remington, .223 Remington and the heavy-hitting .376 Steyr. Over time, all but the .308 Winchester (the original chambering) were dropped from the lineup.

However, for 2019, Steyr introduced its Scout Rifle chambered for the 6.5 Creedmoor.

The 6.5 Creedmoor is not a cartridge many would think suitable for scout rifle chambering. One of the aspects of a scout rifle Cooper felt was paramount was that it be compatible with a cartridge of universal distribution. His thinking was that this would allow the owner to secure ammunition almost anywhere.

He also felt the cartridge should be suitable for game weighing up to around 1,000 pounds. Some of those who attend the scout rifle “church” argue that Cooper would never have approved. Others feel the 6.5 Creedmoor is just a long-range cartridge.

For starters, if a cartridge is suitable for long-range use, then by ballistic fact, it will also work at closer distances. So, that argument has no standing.

The 6.5 Creedmoor—a very close ballistic twin to the Swedish-moose-killing 6.5×55 Swede cartridge—will work well up close and is really only limited at distance by the projectiles it fires. As for what Cooper might have thought about this combination: With all due respect, who cares? Not only is he not here to voice his opinion, but who’s to tell you what cartridge best suits your needs.

Based solely on its configuration, and from a pragmatic position, the Steyr Scout Rifle is a truly fantastic general-purpose rifle. By the same token, the 6.5 Creedmoor is a fabulous general-purpose cartridge. I’ve used it with great success for everything from coyotes to moose and have used or seen it used on targets as close as 40 yards and out beyond 500.

What many are not familiar with is the Steyr Scout Rifle. So, let me explain why it’s so special.

The stock on the Steyr Scout Rifle is made from polymer. When it was introduced in 1997, that was less common than it is today. But this is not just a plastic stock. You see, the engineers at Steyr, with input from Cooper, created a stock that was, by any measure, well ahead of its time.

Let’s start with one of the least obvious features: the negative drop at the comb.

Most rifle stocks show drop from the nose of the comb to the heel. This has been a long-standing tradition, and it’s how stocks are shaped so shooters can get their eye behind open sights. The problem with this concept—and it boggles the mind that we’re still building stocks this way—is that it increases felt recoil because it drives the comb into the shooter’s cheekbone. Not only that, but common open sights are now about as rare as unicorn poop. The comb on the Steyr Scout Rifle rises from the nose to the heel. This helps to better position the eye behind the optic and allows the comb to slip painlessly past the shooter’s cheekbone.

But, wait … there’s more. The stock is fitted with a spacer-style length of pull adjustment. Yeah, I know, that seems common today. But remember, this rifle was introduced in 1997. As with many modern rifles, you can adjust the length of pull by removing or adding spacers. The butt of the stock also has storage for an additional detachable magazine, and there’s a hidden compartment in the grip cap in which you can store other essentials. One of its least-known features is a double-detent magazine well that allows you to hold the full magazine in reserve as you feed and fire individual cartridges. And, get this: Integral to the forearm is a retractable bipod with a built-in cant feature.

Steyr built its Scout Rifle around the company’s SBS bolt system, which very well might be the safest bolt-action ever engineered. It has a three-position safety that is configured as a roller wheel and is located on the top center of the grip just behind the action. The roller wheel has a lock button that must be depressed to move the wheel to the center or most-forward position. And, while in the most-rearward position, the bolt is locked, and the sear and firing pin are blocked. This design feature was incorporated so that paratroopers could safely jump from airplanes with a loaded and ready-to-fire rifle.

When the safety wheel is moved to the center position, the rifle is still on “safe,” but the bolt can be operated, allowing the weapon to be unloaded or loaded in that condition. And then, of course, the most-forward position is the “fire” position. The concept takes a bit of getting used to, but after a day on the range, you learn to depress the actuation button on the safety to release it and slap the bolt, locking it down when shooting is complete.

Perhaps the most distinguishing feature of the Steyr Scout Rifle is its full-length rail. Integral to the action, and encircling the barrel in a free-float format, this rail allows for a multitude of sighting options. You can mount a traditional rifle scope, scout scope or a red-dot or reflex sight. With quick-detach rings, you can do all this without loss of zero and switch between the system that best suits your needs at any given time.

Cooper had a serious distrust of optical sights. Supporting his position was that prior to the turn of the century, the failure rate of optical sights was pretty high. Because of this, he mandated that a Scout Rifle be fitted with emergency backup iron sights. Steyr listened to Cooper: The Steyr Scout Rifle has a flip-up rear aperture sight and a pop-up post front sight. They are fully adjustable for windage and elevation.

Steyr recognized that suppressed fire is becoming more prevalent in America; so, to make its 6.5 version of the Scout Rifle even more appealing, the company added a threaded muzzle. If there was one thing Steyr got wrong, it was the thread pitch used, which is ½X20. This means you’ll need an adapter to attach almost any suppressor. Of course, I would be remiss if I didn’t mention that one of the attributes—maybe the most important one—of the Steyr Scout Rifle is its handiness. Attaching ½ pound and 8 more inches to the end of the barrel destroys the handling characteristics of this rifle. That having been said, you might want to use your Steyr Scout in a situation for which handiness is not at the top of the list.

To test the 6.5 Creedmoor version of the Steyr Scout Rifle, I mounted a Swarovski 1-8X Z8i riflescope in the traditional position. I also attached the thread adapter and screwed on my StingerWorx Hunter suppressor. Then, from the bench, I fired five five-shot groups with three different loads. The best group fired was well under an inch, and the largest didn’t even approach 2 inches. The average for all 15 groups with three different loads was 1.01 inches. That’s about on par with the accuracy I’ve seen from the half-dozen or so Steyr Scout Rifles I’ve fired that were chambered for the .308 Winchester.

I’ve worked with two 6.5 Creedmoor Steyr Scouts, and with one, this occurred 100 percent of the time. With the other, it occurred about 50 percent of the time. As a side note: If the magazine is in the retracted position on the second detent and has rounds in it, you can drop that 6.5 Creedmoor cartridge through the port, and it will go right into the chamber when you close the bolt.

We’ll likely never know how Jeff Cooper would have felt about a Steyr Scout chambered for the 6.5 Creedmoor. We know he was OK with the rifle in .243 Winchester, 7mm-8 Remington and .376 Steyr. We also know he despised the rifle in .223 Remington.

In my opinion, the 6.5 Creedmoor, because of its versatility and light recoil, is an excellent addition to the Steyr Scout Rifle. I think it will help Steyr sell more rifles, and I think it will introduce more folks to the scout rifle concept Cooper spent so much time developing.

And, I should probably add one more thing: With the purchase of any Steyr Scout Rifle, Steyr is offering two days of free Scout Rifle training at the Steyr Academy—that’s a $650 value.