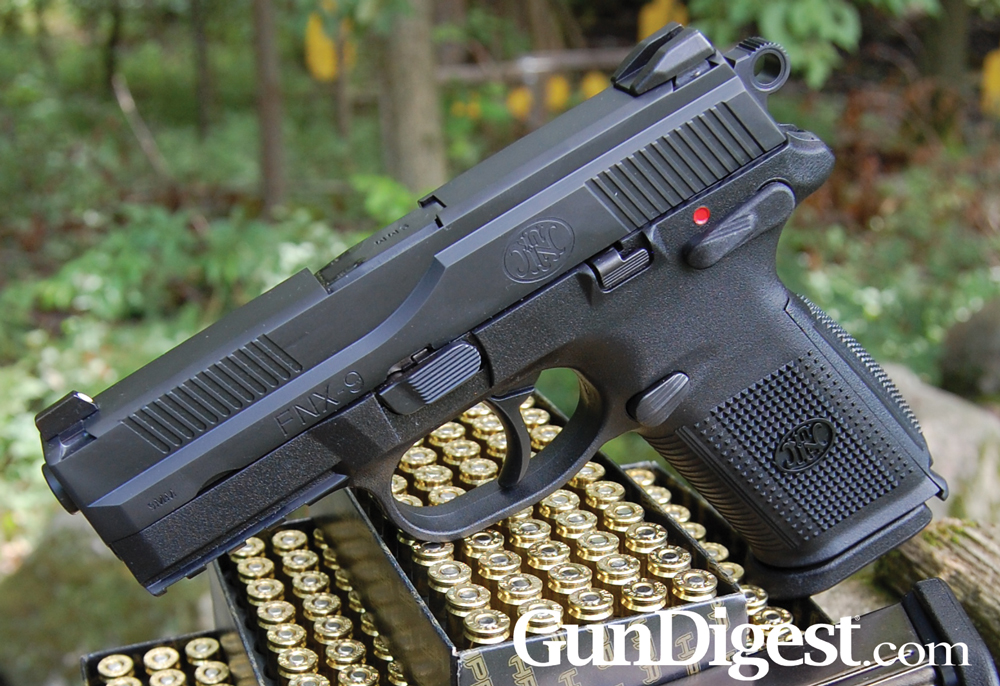 Many people have never heard of it, and if you’re not careful, just saying the name “FNH FNX” can sound like you’re mad or something is wrong. In the case of this polymer 9mm duty pistol, however, almost everything is right.

A little bit of history: European firearms manufacturer Fabrique Nationale (FN) has been producing legendary firearms since the late 1800s, including collaborative products with the late John Moses Browning. In 1977, FN acquired Browning Arms and in 1989 FN became The Herstal Group.

The FNH FNX design includes a polymer frame with a serious gripping surface, a trigger guard that’s large enough to be used with a gloved hand, a tactical rail, a larger ambidextrous magazine release, and an ambidextrous decocker/safety.

In double action mode — available only if you use the decocker to lower the hammer — the trigger stroke was still smooth but very long, so much so that some of the shooters who were helping me wondered if something was wrong with them or with the gun.

The decocker/safety was easy to engage, fairly positive in its travel, but too easy to decock when merely trying to take off the safety. This would result in the need for the long, double action stroke to fire the gun. Of course, a shooter could manually pull the hammer back and return to Condition 1.

When decocking the FNH FNX, the right side of the ambidextrous decocker/safety switch would at times push against my hand, which was annoying. The decocker/safety was not as crisp as other levers or switches I’ve used and let down the hammer with a fairly loud thud.

Regardless of the position of the hammer, a shooter could activate the safety. With the safety on, the FNH FNX allows a full trigger stroke but with no activity in the fire control system. In other words, while some safeties prevent any trigger motion, the FNH FNX’s safety actually disables the fire control system, allowing the shooter to pull the trigger all the way back in single action or double action mode. The FNH FNX is easy to shoot and very accurate in single action only mode. The single action stroke, in fact, is clean and crisp but with more takeup than you would expect. The break surprised the shooters every time. The gun’s trigger was smooth-faced and caused no problems with fingers after squeezing off hundreds of rounds.

The FNH FNX sported a smaller than normal slide release lever or button, which we never used. The shooters preferred to tug the slide manually to let it close and pick up ammunition from a fresh magazine.

The FNH FNX’s larger than normal ambidextrous magazine release reliably ejected empty magazines, as long as we used the release on the left side. Pushing the release from the right side would release the magazine but hold it in place.

The sights on this pistol offered a typical three dot configuration, but with a large white dot on the front sight and regular size white dots on rear sights. Although only slightly bigger than what we were used to in a front sight dot, the larger dot on the FNH FNX’s front post was very helpful in aiming. We put all 400 rounds down range and the FNH FNX reliably ejected all of them. Out of 400 rounds, however, seven failed to go into battery. Each of these mishaps resulted in the nose of the round sticking into the top of the chamber. These stuck rounds were never the first round of a magazine but usually the second or third or fourth in line. More telling: The failures to go into battery only occurred with the less experienced or weaker shooters in our group. I attributed these few problems to limp wrists.

The FNH FNX’s three included magazines each hold 17 rounds of 9mm ammunition. As such, a 50-round box of ammunition was enough to fill two magazines with 17 rounds and an additional magazine with 16 rounds.

We experienced no sore fingers from shooting the FNH FNX but several sore thumbs from loading the magazines. High Precision Range (HPR), a relatively new ammunition manufacturer based in Peyson, Ariz., supplied 400 rounds of 9mm ammunition for this test. For the record, every HPR round looked good in the box, loaded well, fired reliably and accurately, and impressed all the shooters involved in this test.

The FNH FNX 9mm is made in the USA and retails for $699. With its first outing resulting in 400 rounds of HPR 9mm ammunition easily, safely, and accurately down range, you too might have the opportunity to introduce your friends to a gun with an enviable and interesting lineage, one that gets just about everything right.

This article appeared in the Gun Digest the Magazine 2013 Shooter's Guide.