No reason to crutch on mil-surp, here are seven top Mosin-Nagant ammo options for hunting and target work.

What Are The Top Ammo Choices For The Mosin-Nagant:

Giant sardine cans of mil-surp ammunition. If you’re like most shooters that’s what you feed your Mosin-Nagant. Why not? Despite being decommissioned decades ago, the leftover 7.62x54R ammo remains plentiful and, more importantly, cheap. Except, like a diet of junk food, you aren’t really getting the most out of old warhorse when you graze it on this stuff.

Certainly, it’s good enough for most range work and emulsifying the odd watermelon here and there. But it’s not exactly the top-shelf ammo you’d want to bet your life on when reaching out past 200 yards consistently. Plus, much of it is harder on your Mosin-Nagant than a Siberian winter.

This is because it’s corrosive, leaving a residue of potassium chloride and/or sodium chloride in your bore. Don’t get that gunk cleaned out and quickly, you’re looking at pitting your rifle’s bore. Plus, it isn’t exactly the cleanest stuff in the world aside from its caustic elements. In either case, you’ll invest a share-and-a-half of elbow grease keeping your Mosin-Nagant clean. If that’s not enough to sway you, mil-surp ammo is old. Decades upon decades in most cases. While that doesn’t make it trash, it doesn’t exactly make it treasure either. If it hasn’t been stowed correctly in whatever Eastern Bloc warehouse it wiled away the fall of communism, its performance can degrade to the point of frustration. It’s cheap and will feel that way with every trigger pull.

When it comes to Mosin-Nagant ammunition, there’s a better way. While it isn’t exactly falling off the shelves like 5.56mm, there is a load of freshly loaded and modern 7.62x54R ammo on the market that can breathe new life into your Eurasian icon. Modern bullets, cases, propellants and primers work wonders for the rifle’s accuracy and aptitude at a variety of tasks. So if you aren’t well versed in Mosin-Nagant ammunition options (at least the ones chambered in the good old 7.62x54R) we're here to catch you up to speed with the top choices presently available. 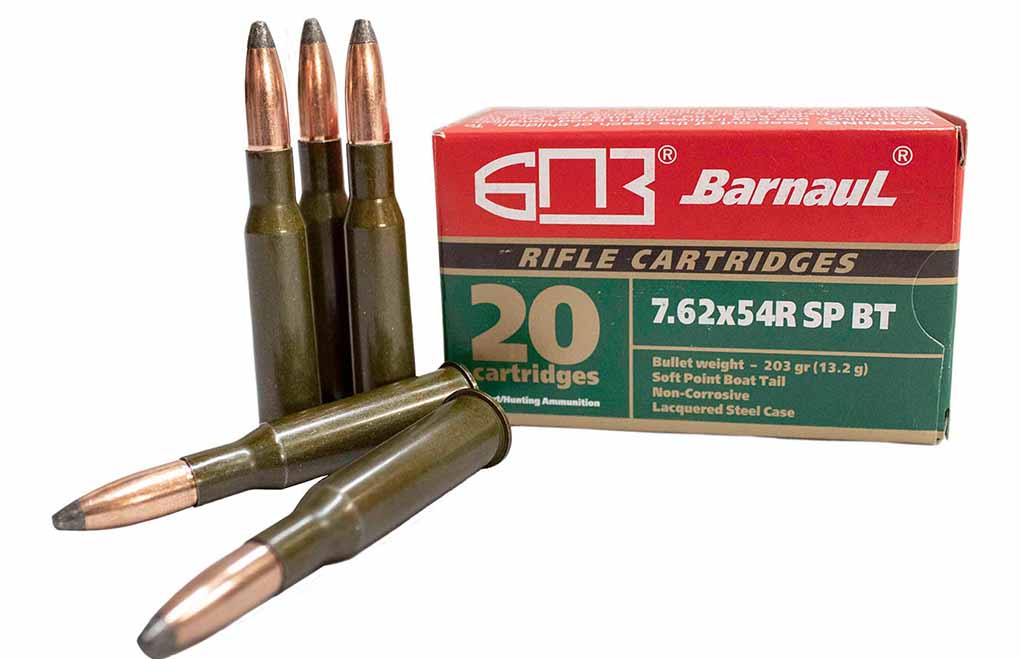 Compared to its full metal jacket ammo, Barnaul’s SPBT isn’t as easily found. Yet, the 203-grain round is worth the hunt. Offering excellent ballistics in a weight appropriate for almost all North American large game, the ammo is a do-all. Mercifully, Barnaul uses non-corrosive primers in the ammo, however, with a steel case. It’s lacquered, so it feeds and extracts easily—especially in the bolt-action Mosin-Nagant. And unless you’re working the bolt like a madman, you aren’t going to cause any undue fatigue to your rifle. One of the few American-made options in Mosin-Nagant ammo, Winchester’s 180-grain 7.62x54R option isn’t flashy, but gets the job done. It’s topped with a plain old cup-and-core soft-point bullet, but moving 2,625 fps the round is a capable medium- and large-game option. The one drawback, it doesn’t offer the same weight retention of more modern bonded-core bullets, but don’t let that scare you off. Our grandfathers slew deer by the droves with similar projectiles. A big bonus, the cases are brass, which means you can reload the buggers. Most bullet weights for the 7.62x54R—at least the hunting-appropriate type—tend to the heavier side, 180- and 200-plus-grains. That what makes PPU’s 150-grain option so intriguing. Certainly, it’s appropriate for elk, moose and black bear, but it’s also quite proper for medium-sized game such as hogs, antelope and whitetail. Compared to other Mosin-Nagant ammo, it moves at a good clip, with the listed velocity at 2,838 fps.
But if light and fast isn’t your cup of tea, never fear, PPU also has a 180-grain offering with the same cup-and-core bullet. Another plus, PPU’s stuff is completely reloadable—brass cases compatible with boxer primers. Big-name American ammo-makers somewhat turn their back on the 7.62x54R, but that doesn’t mean you can enjoy the performance of their products. Graf & Sons teamed up with Hornady to produce an exceptional hunting round, utilizing one of the legendary bullet maker’s most icon projectiles. Topped with a 150-grain SST polymer-tipped bullet, Graf & Sons’ Mosin-Nagant ammo boasts among the best BC/velocity profiles in the cartridge. True, it tends to the lighter side. Don’t let this dissuade you. It hits deer, hogs and coyotes like a bolt from the blue, and is a bit easier on the shoulder in the process. Also, if you need dead-nuts range fodder, nobody going to fault you for pitching it at targets. 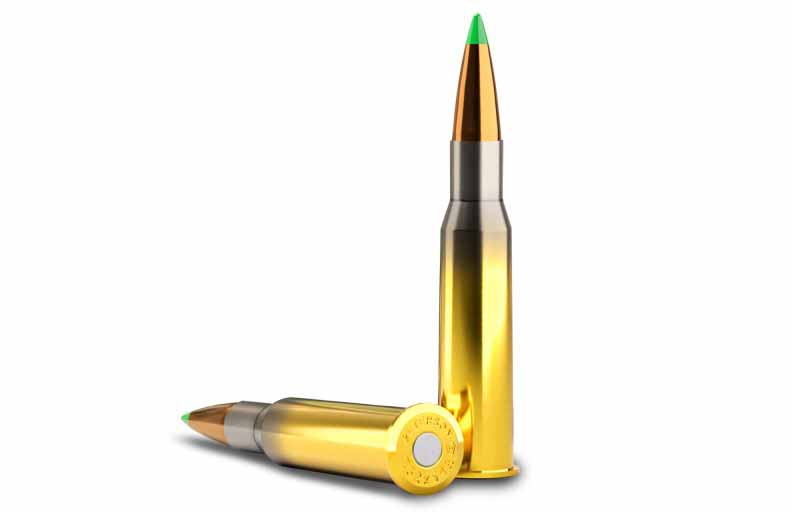 Sierra Tipped Gamechanger for the Mosin-Nagant? A rarified proposition once reserved for reloading geeks is now available to the masses thanks to the Peterson Cartridge. To start, the choice of a 165-grain Tipped Gamechanger, well … chef’s kiss. An unfortunately overlooked weight class in .30-calibers, 165-grain bullets tend to offer the best of all worlds, offering excellent velocity with an exceptional BC. In this case, a whopping .511 BC. Expect the ammo to push your warhorse to its and your limits on the hunt and deliver once on target. The polymer-tipped bullets are renowned for their terminal performance, knocking holes in game that put and keep them down. Also, don’t hesitate spending some of Peterson’s ammo at the range. The results are satisfying. Wait … DoubleTap? That DoubleTap? Yes, the very same one rife with live-saving defensive ammunition options also has you covered when it comes to lead-free hunting ammunition for your Mosin-Nagant. Of course, the company turns to Barnes for the bullet—a 123-grain TSX solid-copper projectile that cooks from the muzzle. Is 3,325 fps fast enough for you? Dollar to donuts, it will be for any game at the receiving end. Don’t let the light weight of the bullet give you the jitters if you’re aiming at big game. Tough as a hickory stump, solid copper projectiles punch well above their weight; in this case, expect it to perform on par with 150-plus-grain bullets. Sellier & Bellot gets you on target with an exception match-grade round designed precisely for drilling the bullseye. A boat-tail hollow-point kept to tight tolerance, the 174-grain option has the chops to extend the reach of your Russian bang-stick, accurately so. The bullet has an exceptional ballistic coefficient (.500) and leaves the muzzle at a respectable 2,585 fps. Again, Sellier & Bellot load the ammo with brass cases, so they're reloadable. But the ammunition performs solidly enough it’s difficult to resist just shooting another box of the factory-loaded stuff. An affordable target-shooting option, Barnaul’s 185-grain Mosin-Nagant ammo has the assets to make your range-time fruitful. Boasting a full metal jacket boat-tail bullet, the round has excellent ballistics and consistent performance. Barnaul lists the BC of the bullet at .524, with a muzzle velocity of 2,470 fps. Perhaps the biggest plus for economical 7.62x54R ammo, it's non-corrosive, so you don’t have to worry about scrubbing your rifle’s bore immediately after some trigger time. Though, like all of Barnaul’s offerings, it’s steel cased, so spent rounds don’t represent reloading opportunities. Wolf has made a name for itself as the purveyors of some of the most economical ammo around—this goes for the 7.62x54R. And it’s difficult to go wrong feeding your Mosin-Nagant with its tried-and-true 174-grain Polyformance ammo. As straight forward as it gets, the ammo is topped with a plain old full-metal jacket bullet that’s pushed 2,558 fps at the muzzle and will hit the mark. The case is steel, but coated in a polymer to ensure smooth feeding and extraction, as well as making the ammo waterproof. For everyday target work with your Nagant, it’s difficult to do better at the price Wolf generally demands. Designed for match-grade performance, PPU 182-grain match ammunition ups your Mosin-Nagant’s game. The Serbian company keeps the tolerances tight with very uniform full-metal jacket, boat-tail bullets that do a good job at bucking the wind. They also load them fairly hot for 7.62x54R—with the ammo’s muzzle velocity listed as 2,626 fps. The cases are brass, so they are reloadable. Additionally, PPU’s match ammo can usually be found at a reasonably decent price.

.45 Long Colt: Why Is The Ol’ Cowboy Cartridge Still With Us?