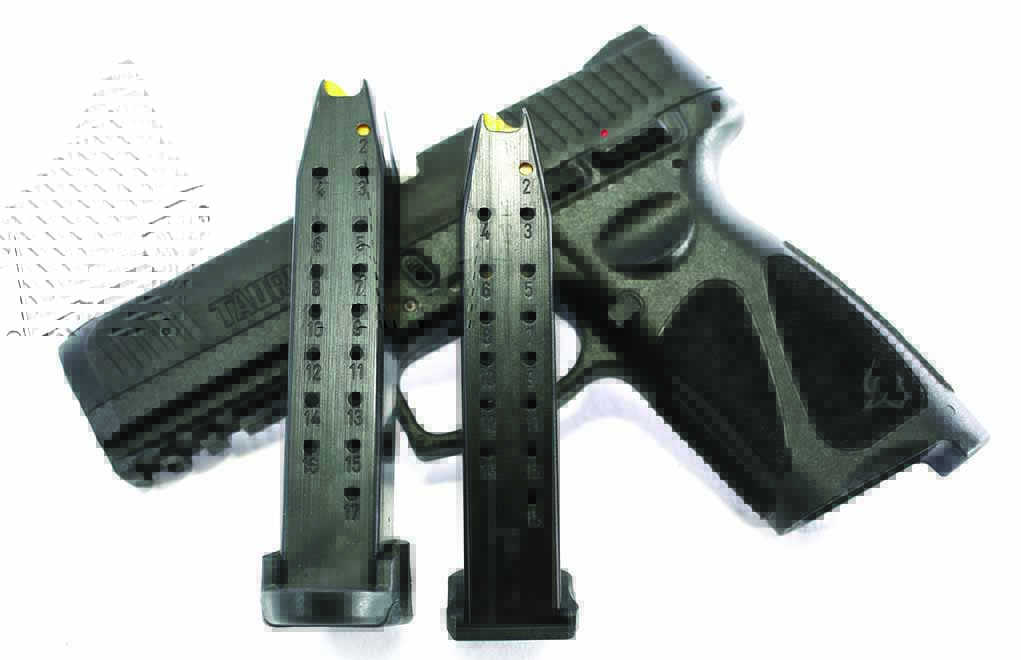 What Sets The Taurus G3 At Top:

Let’s be clear about what the world is: The “big dog”—the one everyone has been going up against for a long time—is Glock. Every time we gun writers receive a new polymer-framed, striker-fired pistol, we wonder, Is this one the Glock-killer?

That’s what I was thinking when they finally let us see the new Taurus. It was at a writer’s event in Florida some months ago. The G3, or at least a pre-production prototype of it, was there for all to hold … and shoot.

I had a big match coming up in a few weeks, and they wanted us to put the firearms through their paces. So, why not? After I’d done my due diligence and tested all the others, I parked myself at the G3, pulled up a carton of ammo and hammered the plate rack. And hammered and hammered.

Once I got into the groove and was building skills (and burning ammo), I tested the Taurus G3 some. No, I couldn’t make it malfunction shooting one-handed, no matter how much “limp wrist” I gave it. I could make it stop by pressing my thumb against the slide, but big deal—I can do that with almost any pistol. It locked open when empty, magazines dropped free, it never failed to go bang! when asked to, and when I was doing my part, the plates got hammered.

A G2 With Attitude

Taurus has been working diligently to produce the pistols that consumers wanted. Starting with license-made clones of the Beretta 92, it branched out to striker-fired pistols and produced a veritable catalog of models and variations. One that stood out and found wide acceptance was the G2c, a compact pistol with a double-stacked magazine. While a lot of people are quite happy with a 9mm with a stubby barrel and a baker’s dozen of rounds onboard, others want a full-sized pistol. As a result, Taurus took the framework of the G2 and expanded it. Hence, the Taurus G3—the successor to the G2.

Starting with the slide and barrel, the Taurus G3 has a 4-inch barrel, which is considered “full sized” in the modern world. Coming from a time when a 5-inch Government model was full sized, modern 9mms seem a tad short to me, but this is what the world is.

And Taurus has delivered. The slide is beveled on the front end, heavily so, to make it easier to re-holster. There are cocking serrations fore and aft, but they’re not the holster-shredding kind; rather, they’re restrained and low-profile. But they work.

You get a choice with Taurus and the G3. You can have a blued slide, which is nitro-carburized for a corrosion-resistant and extremely hard surface. Alternatively, you can opt for a matte stainless slide—more choices right there than the Austrian gives you.

The ejection port is large, and the extractor is external, robust and sculpted to be out of the way of your hands or exiting brass. And, for those who have to have it, there’s a loaded chamber indicator up on top of the chamber. It’s a witness hole, so you can see the rim of a cartridge in the pistol’s chamber.

The sights are low-profile, three-dot, and I have to imagine that if those don’t do it for you, aftermarket sight-makers are ready to provide you with whatever night sight options you desire.

The barrel is chambered in 9mm Parabellum (the .40 is well and truly dead now. “He’s dead, Jim” hardly begins to describe it), and the barrel locks in the slide by the now nearly universal method of locking into the ejection port. It has an integral feed ramp.

Just beneath the slide, on the left side, you’ll see the slide stop lever, and behind that is the thumb safety. Yes, a thumb safety on a striker-fired pistol. Remember that Glock-killer question I asked? One of the things a certain segment of the shooting populace desires is a thumb safety. (And what’s the one thing Glock has never provided? Yep. Taurus does.) Don’t like a thumb safety? Don’t use it.

Ahead of those—but on both sides—is the takedown lever/tab/gizmo. And just forward of those is a pair of dished spots, one on each side of the frame. This is an index point for your trigger finger when it’s off the trigger. Now, your finger has a spot.

Out on the front end, the frame has an accessory rail. You know the drill: lights, lasers, dual use, whatever.

The trigger has a safety lever in the center of its face. No depress the lever. No discharge the pistol. Plus, if you back up to the slide for a moment, you’ll find the expected striker-blocking safety internals.

The rest of the frame is an interesting bit of engineering. The material is polymer, yes, but it’s a relatively hard formulation with very little flex to it. And with this material, Taurus has applied a pattern of stippled patches right where your hand or hands would be making contact. So, you grab it, and it grabs you.

To aid in this process, Taurus also added subtle palm swells and a pair of dished areas where your thumb or the base of your trigger finger can dwell, adding to the “I’m not letting go” attitude of the G3. Taurus calls these “thumb shelves,” but they aren’t shelf-like enough for me to agree with that term. Still, they work, and that’s what matters.

Taurus says the trigger pull is 6 pounds. When I dry-fired it right out of the box, I thought, They can’t read a scale! But no; 6 pounds it is. However, it’s so clean and crisp that it seems lighter. In a world of spongy, gritty trigger pulls on striker-fired pistols, this is nice, very nice.

To add to the “not like the others” list of Taurus G3 details, how about re-strike capability? Yes, we’re all conditioned to snatch the slide back to eject a dud round when we hear the dreaded click, but re-strike means you get a second chance at it should you need it.

The magazines are steel, and you have a choice of 10-, 15- or 17-round magazines (10 for those of you who live in one or another “people’s republics” and 15 or 17 for the rest of us). The pistol sent to me came with one each of the 15- and 17-rounders. The 17-round magazine has an additional baseplate gap filler, so there isn’t a gap between the frame and the magazine end. It looks good and keeps your hand (or at least mine) from getting wedged in the gap.

When it came time to spend the day with the Taurus G3, it was raining (actually, it went from raining to pouring to “get in the boat” and then back to pouring). I was underneath the covered firing line, but that meant I could only be shooting to 100 yards. So, once I finished the chrono work and accuracy (cardboard targets just about melt in a hard rain), I had to plink on the 100-yard gongs (oh, I know—poor me!). I had a gratifying percentage of hits on the gong, and the misses were all right around the edges of it. Yes, I had fun.

The Taurus G3 is a worthy contender for the “king of the hill” contest with Glock … except for one thing: price. There, the Taurus G3 wins, hands down. With a G19 currently showing up in gun shops right at the $500 level, the Taurus G3, with a list price of $345, wins. For the cost of the ’19, you can get a G3, a third magazine for it and 1,000 rounds of practice ammo. That’s a hard hand to beat!

For more information on the Taurus G3, please visit .