Barrel length does affect accuracy, muzzle velocity and delivered energy when testing various classes of rimfire ammo. But other variables tend to play a major role as well.

What Does Barrel Length Affect:

It could be argued that the 125-plus-year-old .22 Long Rifle is America’s most beloved cartridge. It is, after all, most shooters’ first powder-driven rifle. And nearly any household with even a modicum of firearm interest harbors one, if not several. Further evidence is revealed by the fact that Americans annually burn through upward of three billion .22 LR rounds. Whether poking holes in paper, plinking cans, collecting small-game table fare or eliminating pests, most reach for a .22 LR.

Not all .22 LR ammo is the same; even labels like “subsonic,” “standard,” “high” and “hyper-velocity” are somewhat arbitrary. I’m often asked for .22 LR buying advice, as in, “What shells shoot best?”

That’s a loaded (pun intended) question, because every .22 LR shows decidedly individual tastes. Whether shooting a $1,600 Anschutz Luxus 1761 bolt or $170 Marlin Model 60 auto-loader, what shoots exceptionally from one might prove anathema in the other. Accuracy is dependent on a particular rifle’s “tastes.” Finding accurate ammo involves first choosing several brands/labels that offer the performance parameters desired and then auditioning each.

However, do certain .22 LR brands or bullets provide inherent accuracy from a wide variety of rifles?

My greatest curiosity was how .22 LR barrel lengths directly influence velocity. Recently, chatting with a gun-counter expert and noting the 28-inch barrel worn by a particular .22 LR rifle, I predicted the extra-long tube would erode velocity. My theory followed that the weak starting velocity and energy friction actually slow .22 LR bullets in barrels measuring more than a certain length (although I couldn’t guess where that threshold lay).

The expert scoffed, insisting that .22s were no different than centerfire rifles, generating greater velocity in proportion to barrel length via increased pressures. Which of us was right? Finally, one aspect of real-world .22 LR function regularly overlooked is delivered energy on live game. The .22 LR offers pretty puny numbers from the muzzle; they quickly deteriorate as yardage is added due to poor ballistic coefficients. So, just because you can hit, say, a rabbit at 150 yards, it doesn’t mean that enough energy is transferred to assure a quick recovery of said rabbit. So, what is the maximum effective range of common .22 LR ammo?

To put these questions to rest, I requested a CZ-USA Model 455 Varmint bolt-action rifle engineered to allow quick, simple barrel swaps. Three barrel lengths were included in my order: 16.5, 20.5 and 24 inches. Out of further curiosity, I requested Savage’s A22 auto-loading rifle (20.5-inch barrel) to determine if auto-cycling perceivably influences .22 LR velocities.

Testing spanned a week’s time (1,600 rounds fired) atop an MTM CaseGard K-Zone rifle rest in cool, early-spring temperatures and highly variable winds (5 to 12 mph). Five five-shot groups were carefully assembled at 50 yards with each load/rifle/barrel, with no time provided between shots for cooling (the barrel was allowed to cool every 25 shots while making the 100-yard round trip to change targets). A Hoppe’s Bore Snake was deployed every 50 shots.

In the same barrel length, Savage’s A22 performed well with the same American Eagle ammo the CZ didn’t like—while shooting dismally with Remington’s Golden Bullet and Aguila’s Supermaximum that the CZ did like. Unlike the CZ, the A22 assembled tight groups with Eley wares; and, like the CZ, it got along well with all Winchester loads. 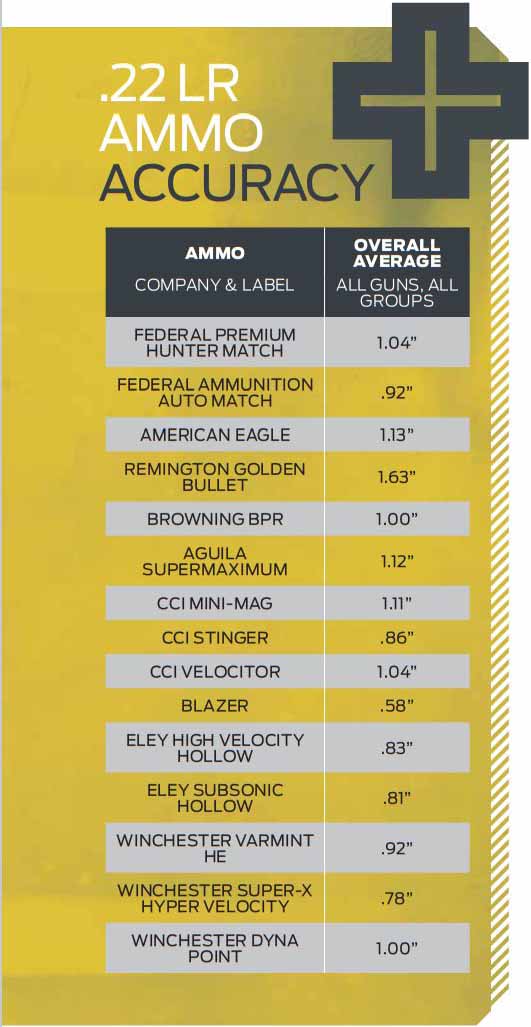 Average velocities were established by setting two chronographs end to end and six shots from each ammo type fired from each rifle/barrel. A bore snake was run through each barrel between ammo strings.

Here’s where things really turned interesting: I’d somehow expected a convenient linear velocity progression in direct relation to barrel length and ammo classes that would allow quoting easy rules of thumb. That proved to be a naïve assumption.

Velocity differences between CZ’s 16.5- and 24-inch tubes were more definitive … but again, they were exceptions. The Browning BPR posted nearly identical numbers, while the CCI Velocitor actually gained 10 fps with the longer tube.

The lowest losses between shortest and longest tubes occurred with Winchester HE (minus 3 fps), Eley High Velocity Hollow and Winchester Super-X HP (minus 7 fps) and American Eagle (minus 10 fps). These numbers could be considered well within standard deviations so as to prove essentially equal. The greatest velocity losses occurred with Federal Hunter Match (minus 55 fps), Eley Subsonic Hollow (minus 48 fps) and Winchester DynaPoint (minus 39 fps), indicating that generally, slower ammo experiences more velocity loss in longer barrels than faster loads (however, the two fastest loads lost 29 fps [CCI Stinger] and 36 fps [Aguila Supermaximum] in the longest barrel).

Out of curiosity, I also fired the slowest and fastest loads (Eley Subsonic Hollow and Winchester Super-X HP) through a Huntertown Arms Guardian 22 suppressor to determine if velocity was affected. There was zero deviation in average velocity by either of the ammo brands.

Being a rabid small-varmint shooter, I’ll offer some educated guesses based on field experience as related to kinetic energy (KE) minimums required to anchor small game and burrowing rodents (remembering that shot placement is just as important on small critters as on big ones). I recommend 65 ft-lb KE minimum for tree and ground squirrels and cottontails, and a minimum 75 ft-lb for prairie dogs and jackrabbits.

Regarding squirrels and cottontails, Aguila’s Supermaximum, with its light, 30-grain pill, and Eley High-Velocity Hollow and Winchester DynaPoint hollow-points, with their slow starting velocities, are out at 150 yards (a darned long LR shot!). Eley Subsonic Hollow is out at 100 yards.

When targeting prairie dogs and jackrabbits, Remington’s Golden Bullet HP is pushing the very limits at 150 yards. Aguila’s Supermaximum and ELEY High Velocity Hollow are out at 100 yards; and Winchester’s DynaPoint just hangs in there at that distance. Eley Subsonic Hollow is barely adequate at 50 yards. Browning’s BPR, CCI Velocitor and Winchester Super-X HP were the hardest-hitting rounds at all ranges, particularly for extended yardages.

I’d hoped to offer some concrete wisdom after crunching the numbers. I only came away with general insights. Taken as a whole, I was correct with my “shorter-tube-boosts-velocity” theory. That said, you can’t kill what you can’t hit, so accuracy must remain the first priority.

Accuracy in your particular rifle comes down to test-firing as wide a variety of ammo as possible to find one your rifle prefers. On that note, as a small-varmint shooter, I was delighted to discover that hyper-velocity ammo isn’t as inherently inaccurate as I once believed.

Finally, varmint and small-game hunters must heed energy numbers in relation to range to assure quick, humane anchoring of burrowing rodents and sure recovery of edible small game.