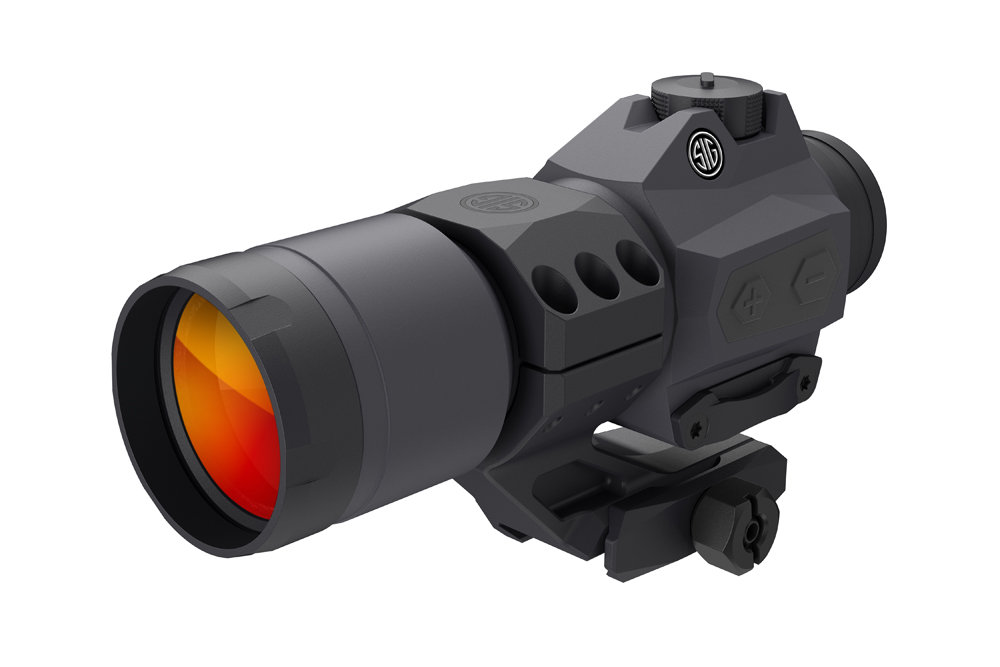 The new SIG Sauer ROMEO6 is a full-size 30mm red dot optic with a robust, waterproof and fog-proof design that's ready for any tactical application.

SIG Sauer's electro-optics divisions has been fairly busy in its short few years in the industry, and this year looks like it will be no exception. The optics manufacturer has recently announced several new products, including a brand new full-size red dot sight.

Unlike a couple of its previous red dots, which are relatively low profile, the new SIG Sauer ROMEO6 red dot features a full-size 30mm tube design. The ROMEO6 appears well suited for a host of tactical applications as well as general range use, and it will be available in two different models: the ROMEO6T and ROMEO6H.

Both models of the new SIG Sauer ROMEO6 are available in either a Ballistic Circle Dot or Circle Plex quad reticle. Each offers crystal-clear viewing in a range of lighting conditions for rapid target acquisition in close-up engagements. In addition, each reticle style on the SIG Sauer ROMEO6 allows the user to toggle between four different selectable reticle options. With the Ballistic Circle Dot reticle, users can pick between a 2 MOA dot, a 2 MOA dot with ballistic holds, a 2 MOA/65 MOA Circle Dot or a 2 MOA/65 MOA Circle Dot with ballistic holds. These ballistic holdover points subtend for the 5.56 NATO and 7.62x51mm NATO cartridges. Meanwhile, the Circle Plex quad reticle offers similar aiming options, but the 2 MOA dot is swapped for a 1 MOA central aiming feature in a plex-type reticle for more precise mid- to long-range shooting, especially when paired with SIG's upcoming JULIET4 4x magnifier.

The ROMEO6H is more like the base model in the new ROMEO6 series, with the ROMEO6T offering additional features such as a solar panel with two super capcitors that offer up to 9 hours of battery-free life if the traditional battery runs dead. The ROMEO6T is also built to 810G Mil Spec, featuring a durable 7075 aluminum housing for hard use. It is waterproof to IPX8 standards, while the ROMEO6H is waterproof to IPX7 standards. Both are fog-proof and utilize a rugged 1.53-inch mounting system.

As with many red dots on the market, the new SIG Sauer ROMEO6 line offers true unlimited eye relief, meaning the shooter can acquire the correct aiming point no matter where the eye is positioned behind the sight. Also similar to many of SIG's prior electro-optics products, the ROMEO6 comes equipped with the manufacturer's MOTAC (Motion-Activated Illumination), so the battery isn't wasted when the device is not in use. It simply powers up when motioned is sensed, and turns off after a period of inactivity.

Both of the new ROMEO6 red dots utilize ultra-efficient red LEDs for daylight visibility with extended runtime, as well as Mil Spec objective coating to limit downrange light leakage. And of course, both are backed by SIG's excellent fully transferable unlimited lifetime guarantee.

The new SIG Sauer ROMEO6H and ROMEO6T are available for $539.99 and $719.99, respectively. For more information on the new ROMEO6, visit the SIG Sauer website.