Back in early November of 2015, during Colt's first Media Day event at the legendary Gunsite Academy in Paulden, Arizona, Colt introduced its new Competition Pistol – and several other new products – to a small number of gun writers and editors. The event was an excellent showcasing of Colt's upcoming new products for 2016, particularly after some of the hardships the company had recently gone through, and the Competition 1911 was one of the major highlights of the event. I was lucky enough to be among that group, and I was able to shoot the new pistol long before it was officially introduced ahead of the 2016 SHOT Show.

I remember being fairly impressed with the Competition pistol (in both 9mm and .45 ACP) and thinking that Colt was onto something with it. Apparently, Colt and the shooting public agreed because the U.S. manufacturer announced in early November of this year that it would be bringing out stainless steel versions of the classic Competition pistol. This was, of course, in addition to the company's announcement a few days prior that it would also be offering the Competition 1911 in .38 Super. In short, buyers – and the folks at Colt – liked the Competition pistol well enough that the manufacturer decided to expand its lineup, adding both .38 Super and stainless steel models. 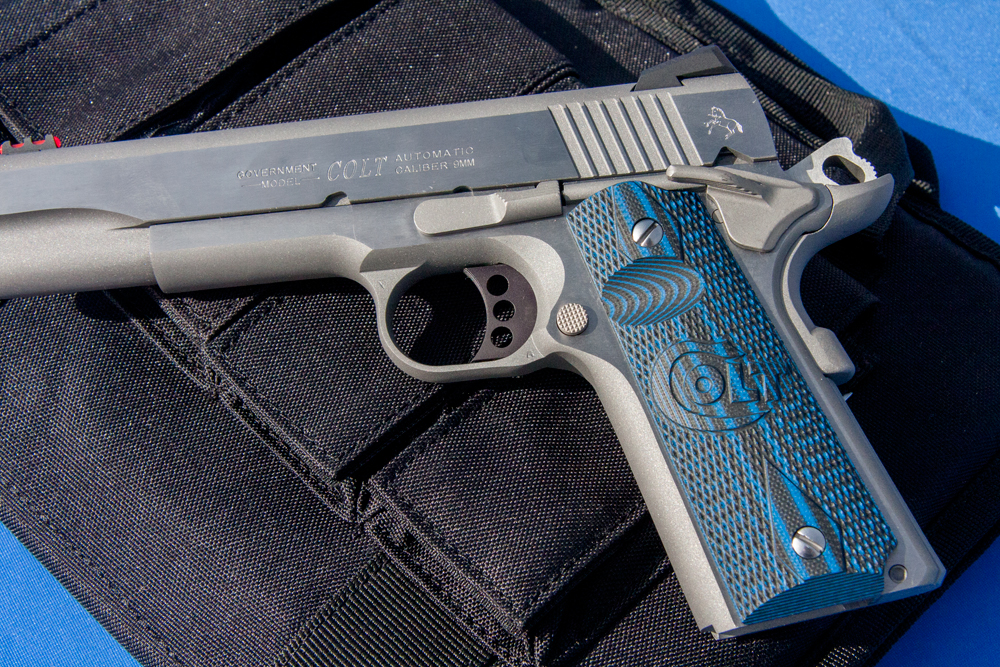 Not long after Colt's announcement about the stainless steel models, I was back at Gunsite again for Colt's 2016 Media Day to learn about the company's upcoming new products for 2017, as well as recent introductions such as the stainless Competition pistol that had already been announced. Naturally, I got a chance to see and shoot the new stainless models and, as with the original Competition pistol, I came away just as impressed.

Like its predecessor, the new Colt Competition Stainless pistol is built to be a rugged racer, perfect for the competitive circuit or for simply honing your skills at the range. Because of this, across all models the Competition comes equipped with great features such as Colt's Dual Recoil Spring System, a National Match barrel, Novak adjustable fiber optic sights and a three-hole aluminum 4.5- to 6-pound trigger. The Dual Recoil Spring System is something I experienced for the first time at Colt's 2015 Media Day, and it has become a standard feature on most, if not all, of Colt's newer handguns. This system is designed to reduce the shooter's felt recoil while also extending recoil spring life and thereby delaying the inevitable replacement. Shooting can be a subjective experience that is often not the same for everyone, but I can say that, for me, there's a noticeable difference in recoil with Colt's Dual Recoil Spring System, and I find I'm able to shoot accurately at a faster pace. And after hearing other writers and editors discussing the system at both Media Day events, I don't think I'm alone in that feeling.

The impact of the National Match barrel, Novak adjustable sights and three-hole aluminum trigger is also pretty easy to see, as the new Colt Competition Stainless pistol seems every bit as accurate as its predecessor. Whether chambered in .45 ACP or 9mm, I had no trouble hitting the steel targets Colt had set up about 15 to 20 yards downrange with the new Competition Stainless. This likely would've been the case with a Competition pistol chambered in .38 Super as well; however, one was not available for testing during the event. Like the earlier pistol, the Competition Stainless features custom blue checkered and scalloped G10 grips, an upswept Beavertail grip safety and an undercut trigger guard. This allows for more secure positioning in the user's hand, and the checkered G10 grips are textured enough to prevent slipping without gnawing at your hands.

Obviously, the main difference between these new models and the original Competition pistol is of course the stainless steel slide and frame finish. The new Colt Competition Stainless has a brushed stainless finish that is both visually appealing and corrosion resistant, and at only $100 more than the MSRP on the standard models, it's not an outrageous upgrade for those who want it.

Another, slightly more subtle, difference from the original Colt Competition pistol I shot at the first Media Day event is that instead of a blue fiber optic front sight, Colt has moved to a red fiber optic. I actually liked the blue fiber optic when I first shot the gun back in 2015; however, there were a number of other shooters at the time who noted that standard colors, such as red or green, would offer greater visibility, particularly in lower light. Colt obviously listened to some of that feedback and made the change. In terms of dimensions, weight and capacity, the new Colt Competition Stainless versions are identical to previous models. Weight across all models is consistent at 36 ounces, as is overall length at 8.5 inches. Capacity is eight plus one in .45 ACP and nine plus one in 9mm and .38 Super.

The new stainless steel Colt Competition pistols are available now and range in price from $1,049 to $1,099, with the .38 Super model fetching the highest price. For more information on these new Colt Competition Stainless models, check out the specifications below or visit the Colt website.