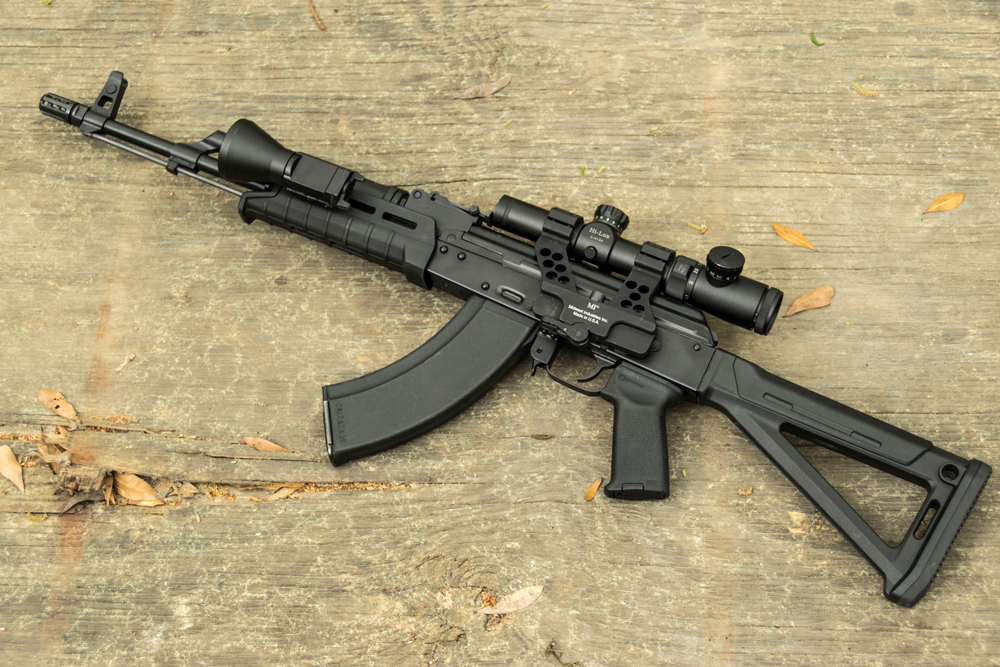 The AK platform poses unique challenges when it comes to optics. Here are some AK optics options for shooters who want to stretch out their rifle's range and capabilities.

“Kalashnikov rifles are inaccurate, crudely-made guns all but worthless past 100 yards.” If you’ve heard this, or something very similar, from either shooting buddies or cantankerous gun shop staff, you’re not alone. While the best-known myth of the AK-47 is its unstoppable reliability, its alleged inaccuracy is a close second.

You read that right. The AK may be inherently less accurate than rifles with less reciprocating mass or free-floating barrels, but the little Avtomat is still capable of successfully engaging targets well past 300 yards. There’s a catch though: The AK has more than just its violent, long-stroke piston-driven action working against it; it also suffers from lousy iron sights and rounds with a drastic ballistic curve.

The solution to these performance impediments is a simple one; something distant shooters and marksmen have known for decades. A shooter can’t hit what they can’t see. So take the obvious step and purchase an optic for your AK. Unfortunately, it’s not quite that simple. Utilizing optics on Kalashnikovs is a somewhat tricky proposition. Thankfully, we’ve assembled this concise guide for your journey to reaching zen-like precision with your AK (or something like that).


The biggest hurdle to overcome when installing optics on your Russian lead-slinger is finding the best way to attach them to the rifle. While most modern rifles have rails of some built in to the receiver or barrel itself, the AK comes from an era when only spotters and snipers utilized optics on combat.

Well, there is one other type of soldier equipped with optics: night sentries.

Japanese night raids in the pacific theater of operations taught the USMC the value of illuminating the inky-black perimeter around forward operating bases with a modified version of the M1 Carbine equipped with an infrared scope, the T3. Along these same lines, the Soviet military developed the AKMn in 1954. This rifle featured an effective flash suppressor and a side rail mount for enormous Soviet night vision scopes.

For nearly six decades, the Soviets utilized this mount for specialized units and rifles but waited to equip their standard infantry rifles with these rails until the early 1990s. The design is largely unchanged, with all standard-pattern AKM side rails capable of using the same mounts. Non-standard mounts like those found on Yugoslavian/Serbian rifles exist, but for the sake of brevity, I’ll stick to Soviet-pattern.

What this means for shooters is that in order to mount optics to their AK without modifying it or buying new parts, they must utilize a side rail mount. Shooters willing to replace parts or install new ones have more options, but side mounts are the most common and easiest to utilize.

Which brings me to my first recommendation. I have run a ton of different mounts on dozens of AK carbines, and after running plenty of “good” mounts I finally found a perfect one. This may not seem groundbreaking to most readers, but rarely in the gun industry is something objectively superior in all regards to its competitors: The RS Regulate AK-300 is one such product.

At least for shooters looking to mount Trijicon ACOG magnified scopes or Aimpoint 30mm reflex sights. The reason is due to the modularity and flexibility of the system. I say system because, unlike most mounts consisting on a singular component, the RS Regulate is a two-part system. Just like AR-15 receivers, the mount has an upper and a lower.

RS Regulate does this so shooters can buy special uppers designed for specific optics, like their ACOG-friendly AKOG. Another benefit of this modular design is that it allows you to keep a desired upper, while purchasing a different lower that either affects the fore/aft position of the optic or which side rail it mounts to—including the atypical mounts found on Yugoslavian and Serbian rifles like the NPAP.

What’s more, the mount allows for lateral alignment with the rifle’s barrel. Because of the “L-shaped” design of side-mounts, if the rail or mount doesn’t align the optic directly over the barrel, you will have to deal with point of aim/point of impact horizontal alignment issues. Not totally unlike fighter planes of WWII with wing-mounted guns that had to be adjusted for point of convergence, or where the path of both barrels meet.

That said, unmagnified optics like reflex sights aren’t as affected by these alignment issues as magnified ones. Simply due to the size of the sight’s aiming dot—a four MOA dot represents a one-foot circle at 300 yards. Because of this, these types of optics aren’t typically used at longer ranges where any misalignment concerns are drastically multiplied.

While the AK-300 series of mounts are great for magnified optics and reflex sights alike, for RMR-style mini red dots, I prefer a scout-type setup. This raises some unique issues with the AK, since the vast majority of available models on the market lack a monolithic rail.

Which leaves two options: Replace the rear sight assembly with a picatinny rail segment, or utilize a railed handguard. Each has its own pros and cons. The replacement segment is very minimalistic and lightweight, but it tends to mount too high with most optics and is situated slightly too far back for my personal taste. Ideally, a red dot could be installed on the muzzle itself, but that isn’t realistic.

The next best thing on the AK is to install one on a railed handguard. There are a few options available, but every polymer one I’ve tested failed to correctly hold zero. So shooters will have to use either a steel or aluminum railed handguard.

The problem with these is that they’re usually bulkier and heavier than either wooden or polymer handguards, and they consequently make the rifle feel sluggish and nose-heavy. One of the few exceptions comes from one of my favorite AK aftermarket parts makers: Manticore Arms.

This small machine shop has been churning out specialty parts for Tavors, Steyr AUGs, AR-15s and AKs for years. One of its best-selling products is the ALFA Rail. Available in standard and extended lengths, the ALFA rail is a KeyMod aluminum handguard that closely matches the shape and size of wooden handguards.

It features KeyMod slots on both sides as well as 45-degree offshoots, permitting shooters to mount lights, lasers, foregrips and other accessories however they want. Not only that, but it also includes a Picatinny railed upper handguard. This is one of my favorite aspects of the ALFA.

Like other railed handguards, it lets shooters mount reflex optics in a forward location, ideal for sights of this type. Unlike most railed handguards, the ALFA is lightweight and lacks all the jagged edges of competing designs covered in picatinny rails.


Choosing optics isn’t always an objective process. While light reception is important, some people just prefer certain brands, reticles and even tube diameters. Thankfully, the list of compatible AK optics is much shorter than those that function correctly with the AR-15.

First off, most optics designed to co-witness with an AR-15 are a poor choice for the AK. This is because they mount far too high to be comfortably used by the shooter. One exception is the Primary Arms PAC5X scope.

Normally, the PAC5X prismatic scope would sit far too high to be considered an ideal optic for an AK, or AKM carbine. However, the PAC5X utilizes the same mount as the Trijicon ACOG. This is important, since RS Regulate makes an upper for their scope rails that fits ACOGs perfectly.

Thus, shooters can utilize a fixed magnification, ultra-bright prismatic scope like the PAC5X on a platform that rarely sees such high-end optics. What’s better is that the PAC5X is available with a 7.62x39mm BDC reticle, making it a great fit for the traditional AKM carbines chambered in the Soviet cartridge. Shooters looking to run one on a 5.56mm or 5.45mm AK can utilize the 5.56mm BDC version, which affords them the benefits of a high-end, ultra-bright optic with many of the same features, at a much more affordable price.

Shooters looking for a different magnified scope option should take a look at offerings from Hi-Lux. Shooters can mount the new Hi-Lux CMR-AK762 optic with ease on their AK’s side rail, with either a 30mm RS Regulate upper, or a Midwest Industries mount.

In either case, the optic’s adjustable magnification and built-in 7.62x39mm BDC help stretch the relatively slow-moving .30-caliber round’s legs. This makes the CMR optic a great tool for shattering myths about the round’s allegedly limited range.

As far as reflex sights, any will do so long as they can be used on a pistol slide as well. Though this isn’t so much a requirement as a helpful suggestion. The last thing a shooter wants after sinking money into upgrades and accessories is to find that their new optic sits too high to be comfortably used with standard AK buttstocks.

Obviously, this is just a small sample of the sight options available for the AK platform today. As the rifle gains more and more followers and owners, the aftermarket parts trade will swell alongside it. So if you don’t see an option on this list that fits your definition of the perfect aiming solution, sit tight—the next best optic might be just around the corner.

Editor's Note: This article originally appeared in the May 2016 Issue of Gun Digest the Magazine