Vintage and modern classics, these seven Marlin lever-action rifles are certain to be gems of your gun safe.

What Are The Classic Marlin Lever Guns:

Clouds of dust kicked up by thundering hooves across the sunbaked prairie. The American West continues to stir the imagination, despite its long-ago closing and subsequent taming. Though, artifacts from that bygone era linger and are as striking now as they were in the days of Doc Holliday and Bat Masterson. Among these is the most quintessential of American firearms—the lever-action rifle.

While Marlin Firearms was never strictly a “lever-gun” company, it produced its fair share of outright classics in the style and still does today. In fact, there are many who stand by the idea the Marlin lever-action rifle is the finest lever-action rifle ever conceived and set in blued steel. It a contention that’s difficult to argue against.

Side-ejecting, solid-top receiver, pistol-grip stock—its rifles were innovative. And they got the job done—be it knocking over tin cans or a bull moose. It might even be said that a collection without a Marlin lever-action rifle is incomplete.

Let’s rectify that. Here are seven classic lever-actions from the iconic company that are as great now as they were when the first hit the scene. Add one to your rack and you’ll understand why the Marlin lever-action rifle is still with us today.

Rimfire and lever-actions fans shed a tear when, in 2007, Marlin ceased production of what arguably is among the greatest .22 rifles ever produced. (Technically the company does still make the 39A, however, it’s a custom order.) Billed as the oldest continuously manufactured rifle in the world, more than one shooter cut their teeth on the trusty, quick and accurate plinker.

Smoothness of action and an exceptional trigger endeared the Marlin lever-action rifle to generations. And there were some knowing marksmen who were found at the business end of the 39A—not the least Anne Oakely (technically its precursor, the 1891). The fact it had a 21-round  tubular magazine (when load with .22 LR ammo), was easily taken down into two pieces and had a heavier barrel than many .22 LRs, also didn’t hurt in driving the gun’s popularity.

Today, if you find one, it’s worth snatching up. Well-made and sharp shooting, they continue to be as fun as they ever were.

Arguably, the Levermatics are a bit obscure at this point. But as those who’ve been behind the trigger of one can attest, they’re something special. Maybe one of the most underrated brush guns to come down the pike.

What makes the family (56, 57, 57M and 62) so dandy—aside from a removable box magazine—is a frighteningly short lever throw. The lever travels less than 2-inches, in turn it’s possible to operate it without taking your hand off the grip. Needless to say, this makes the rifles fast.

Based on the Kessler Lever-Matic shotgun, Marlin licensed the designed after the other company went bankrupt. Not impossible to find, the hammerless lever-actions had a relatively short production run—just about 15 years in the 1950s and 1960s. Primarily a .22 LR and .22 WMR, the Marlin 62 did offer shooters a centerfire option chambered .22 Jet, .256-Magnum, .357-Magnum and .30 Carbine. Though, no matter the caliber, the Levermatic proves an absolute blast. 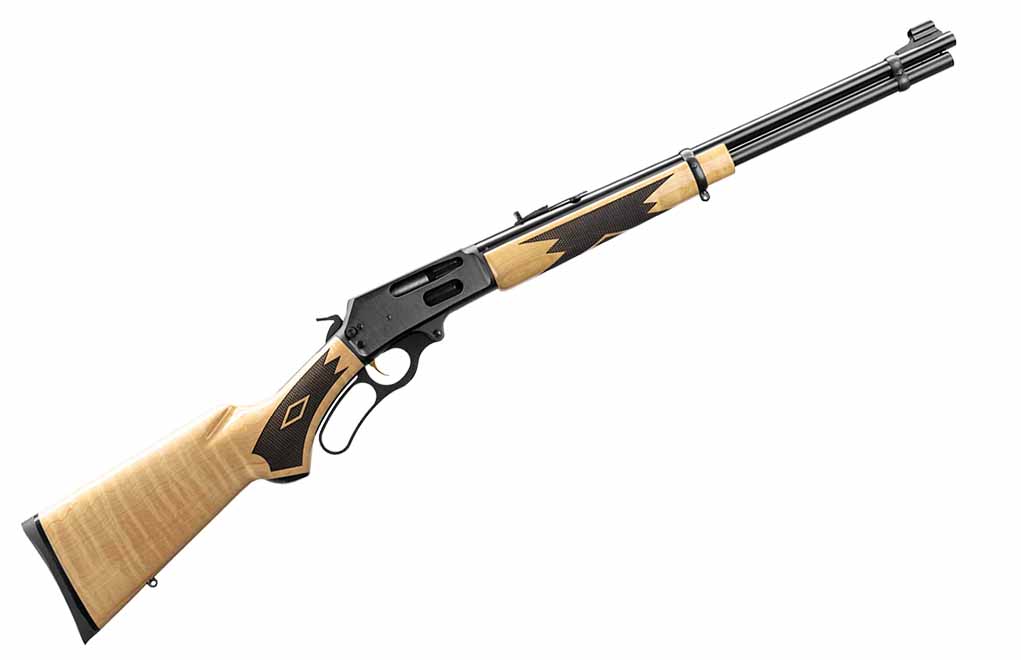 A deer slayer through and through, this Marlin lever-action has a veritable mountain of venison to its name. Though, its time as a hunting season favorite came somewhat further down the line than some other lever guns.

While the Winchester 94 could make this claim well before the Marlin 336 (and its predecessor the 36), it did falter somewhat as the sport progressed. Top ejecting, the Winchester didn’t play nice with scopes. The side-ejecting Marlin .30-30, on the other hand, was just the ticket to ensure hot brass cleared out without so much as a hiccup.

Hitting the scene in 1948, the 336 was an excellent advancement from the 36. Moving away from the 36’s traditional square bolt, Marlin not only made the 336 arguably stronger than its predecessor, but also much smoother in operation. Strange as it might sound, the Marlin 1894 owes a debt of gratitude to Elmer Keith and Phil Sharp. Without the pair’s pioneering work developing a hot-rodded .38 Special cartridge—now known as the .357 Magnum—the famous Marlin lever-action rifle might have been a footnote in history. Heck, by 1935 the gun was all but written off by the company—out of production and starting be become forgotten … almost. Wisely, with renewed interest in pistol-caliber long-guns thanks to the magnum cartridge craze, Marlin didn’t go back to the drawing board to make a gun chambered for them. Instead, it stuck with the established and effective design of the ‘94 and reintroduced it in 1969.

Like most Marlins, the advantage the ’94 brought to the table was its side-ejecting system. Overall, simpler and arguably stronger than top-ejecting lever-actions, it was an easier rifle to keep in working order and have ready at a moment’s notice. Proof of this concept came in the rifle’s earlier days when it became the choice of Canadian and Alaskan gold prospectors, who found top-ejecting lever-actions had a tendency to freeze solid. Not good in brown bear territory. 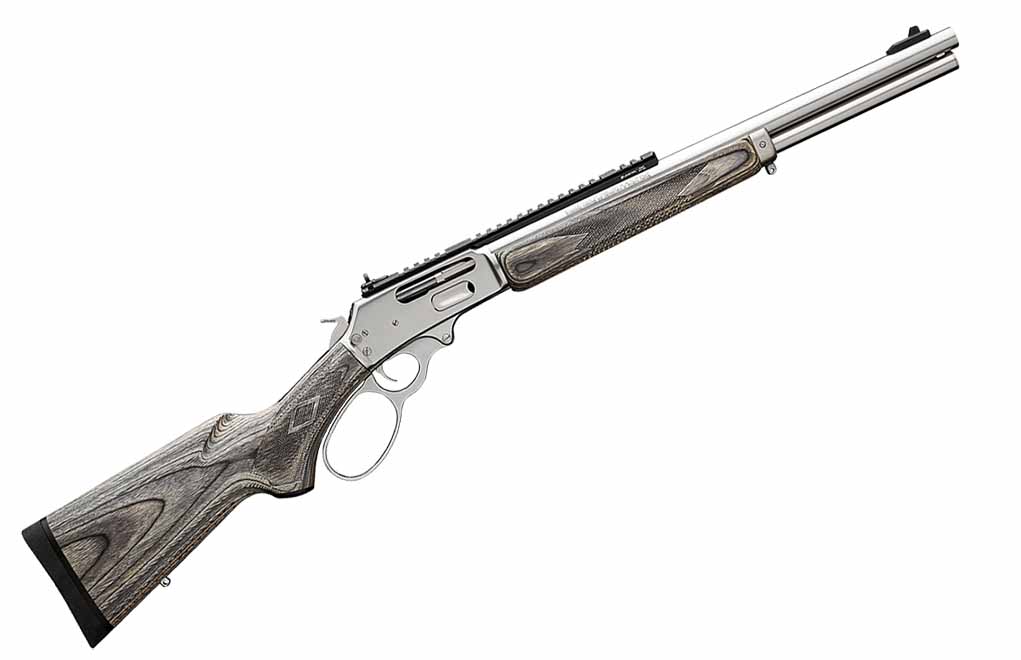 Undisputed muscle in the field, when most shooters think big-bore lever-guns they think the monstrous 1895. It’s been that way for more than 100 years, though the behemoth has had a tough slog generating true interest until recent times. When it first hit the scene, bolt-actions and high-velocity cartridges were all the rage; then, when it reappeared in 1972, it was the time of the belted magnum. A rifle chambered for .45-70 couldn’t hold a candle to that … or could it?

It seemed it could, once certain states loosened deer regulations to include straight-walled rifle cartridges. Sure, the Marlin 1895 wasn’t going to pitch a .45-70 bullet a quarter-mile, but it didn’t need to in these regions.

Early on, the Marlin lever-action rifle boasted the same square-bolt, side-ejecting design of nearly all of the company’s guns. Things changed later in the century, with Marlin opting for the round bolt of the 336, only more beefed up for the rifle’s large cartridges. In addition to .45-70 Government, the rifle is also available in .444 Marlin—the powerful modern straight-walled cartridge Remington developed for Marlin. Despite the company calling this version of the rifle the Marlin 444, it is essentially the same gun.

Sure enough, this Marlin lever-action rifle is tougher to find than the rest. And it might not be the first thing you’d strip off the rack come hunting season. But if you enjoy historic firearms, then the 1889 is worth the hunt.

A watershed rifle, the gun pretty much set the tone for the Marlin rifle as we know it today. The company’s first solid-top, side-ejector rifle that’s pretty much been Marlin’s groove ever since. Essentially the design makes for a more rugged gun, given it has a locking lug, and safer, thanks to a firing pin system that prevents firing until the bolt is closed.

On top of all this, it can shoot! Again, Anne Oakley was known to favor the rifle, among other crack shots. The rifle can be found in a variety of chamberings, including .32-20 Win., .38-40 Win. and .44-40. No matter what it shoots, it’s among the all-time classics.

First off, the Model 1893 will run you a pretty penny, unless you find an absolute rag of a specimen. However, if truly iconic rifles are your thing, this Marlin lever-action is a must-have. It was the belle of the company's catalog from the turn of the century until the advent of the 336 action.

Initially, the 1893 was a black powder rifle, but earned its popularity as Marlin's first gun chambered for smokeless powder cartridges. This included a chambering for the deer-hunting favorite .30-30, as well as .32 Win. Spl. and .25-36. A staple of deer woods coast to coast, hunters flocked the rifle, with some 1 million made over its production cycle.

In addition to being a top shot, it has everything you want in a classic Marlin: solid-top receiver, square bolt and beautiful stock and lines. It's no wonder the '93 continues to draw top dollar at auctions.