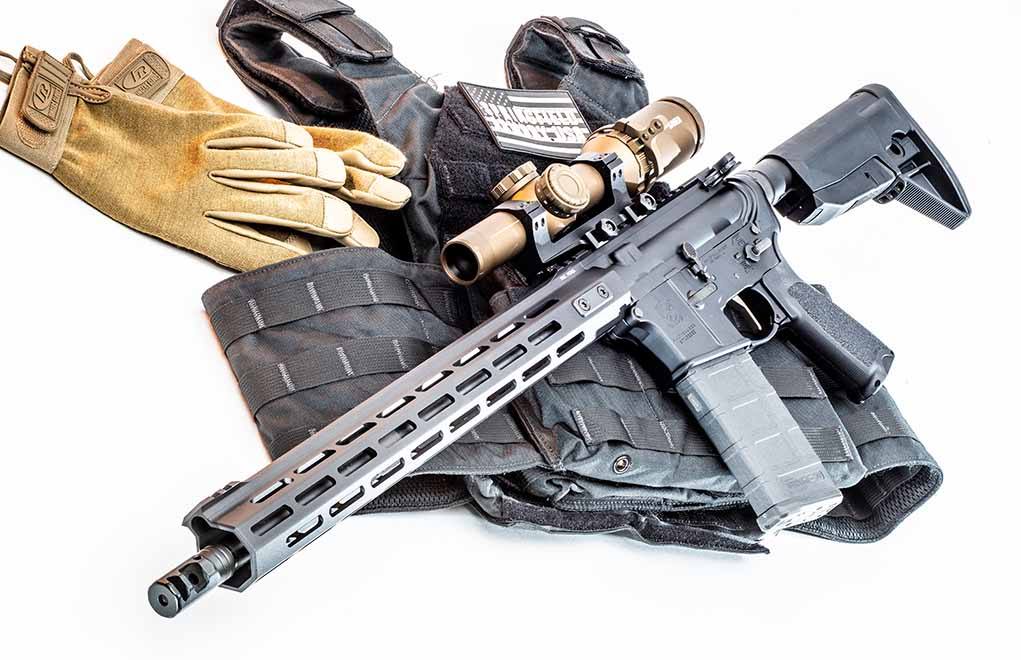 What Makes The SAINT Victor Stand Out From Other AR-15s:

Ok, ok, it’s an AR-15 carbine chambered in 5.56 NATO, and that isn’t exactly new. Or news. But it does illustrate something I think is wrong with a lot of modern society: In the view of many, unless you’re completely upsetting the system, you are a hack. If you aren’t coming up with a revolutionary replacement to the old, you are a slacker. If you aren’t causing people’s heads to spin, you’re a poseur.

The problem with that viewpoint? Not everyone can be an Einstein, a Copernicus, a Salk. And because it isn’t easy, the end result for a lot of people who try to live up to this new standard is simple: They re-invent the wheel, add a spoke, name it after themselves and scare up praise to the skies.

The Sum of Great Parts

There’s another path: You incrementally improve each detail, every aspect of something, and the end result is that old adage, “The whole is greater than the sum of its parts.”

Ok, so Springfield sticks with mil-spec on the receivers. They’re both machined from 7075-T6 forgings and are then given a Type III anodizing. The mil-spec crowd can have no complaints here.

Also, the two receivers are fitted with Springfield’s Accu-Tite tension system. This is a nylon-tipped screw in the lower receiver. It’s covered by the pistol grip (so your buddy can’t go messing with it and think he’s funny); and, when properly adjusted, it bears on the bottom of the rear lug of the upper. This means each upper/lower set closes up and locks in place without wobble. If the fit should wear, you can adjust it — albeit not easily. But it isn’t meant to be easy, just handy, and the wear would take a long time anyway.

Inside the upper receiver is an enhanced M16 bolt carrier and a bolt made of 9310 alloy steel. Yes, yes, the mil-spec is supposed to be Carpenter 158, an alloy that was state-of-the-art circa 1958. There have been a lot of advancements in steel alloy and heat-treatment technology since then, and Springfield has taken advantage of this.

Springfield installs a GI charging handle. I have to give the company a thumbs-up on this one also. Too many charging handles are too big and get caught on clothing and gear. For competition, yes … a big handle is good — but not for general use or personal defense. If you want something bigger or ambi, it’s easy enough to install one.

The back end of the carrier assembly has the lower receiver sporting a mil-spec-diameter buffer tube (aka “receiver extension”) that’s also 7075-T6 aluminum and given the same Type III anodizing that the receivers have.

The lower receiver has the expected controls, mag catch, bolt release and selector. However, the markings for the selector are not mil-spec. The “safe” and “fire” markings are each in a rectangular box (with the “safe” having an X through it), and the “fire” and its box are then in a larger border. These markings are on both sides, even though the Victor does not have ambi controls. The magazine well is marked on the left side with the Springfield logo, along with “multi caliber” and the serial number. On the right-hand side, the magazine well is marked “Springfield Armory SAINT.”

On the end of the receiver extension, Springfield has installed the most excellent Bravo Company Gunfighter Mod 0 stock, complete with a non-skid pattern molded into its rubber buttplate. Light, compact and lacking edges or protrusions that can hook on objects or gear, it’s adjustable for length of pull on the six-position buffer tube.

The receiver plate has a QD socket at six o’clock for those who want to use a single-point sling. (I don’t, but the location is out of the way and not a hindrance to other slings or rifle manipulation.) The castle nut that locks on the buffer tube is properly staked, and the Bravo stock has both a slot for a sling and a socket for a QD sling swivel. Inside, the buffer weight is marked “H,” indicating it’s the heavier version … and that’s a good thing.

Where it Counts: The Insides

Inside the lower, Springfield installed a single-stage trigger assembly, but this manufacturer does more than just throw in mil-spec parts: The internals are carefully machined and fitted and then given a boron-nickel plating. The trigger wears an almost-flat blade or paddle. It rides over a Bravo Company trigger guard, curved and not folding.

The upper receiver is a flat-top mil-spec forging with forward assist and a dust cover door on the ejection port. The bolt inside the upper receiver mates with a standard barrel extension that’s installed on the 16-inch barrel. The barrel is made of chrome-moly-vanadium steel; and, once it has been profiled, drilled and rifled, it gets a Melonite treatment. This is the latest high-tech surface treatment of steel alloys. It both hardens the surface and increases corrosion resistance. You don’t need to chrome-plate a bore once the barrel has been Melonite treated.

The twist is 1:8 inches. This is the new standard, because 1:9 is just on the border for stabilizing anything heavier than 75 grains. Likewise, 1:7 is sometimes too fast for bullets lighter than 55 grains. The muzzle end of the barrel received a set of threads in the standard 1/2×28 pitch with a muzzle brake installed. (California models lack this.) You can swap the muzzle brake for a flash hider if you want, because the thread is standard.

Underneath the handguard, on the barrel, is a gas block and mid-length gas tube. The Victor is a classic direct impingement design, so you have lightweight and reliable operation.

Outside of the barrel, Springfield has installed a 15-inch free-float handguard with M-Lok slots. Springfield even went a step further: Instead of a full-length top rail, it carved off the rail behind where the front sight is to a few slots before the receiver. This allows you to get a really firm grip around the handguard. Those of you who shoot thumb-over style will find that the handguard accommodates your grip just fine. In addition, a nice detail on the folding sights is that the rear can be folded with either the small or large aperture at the ready. You get to choose which you want there when the sight pops up.

The back end of the handguard overlaps the receiver with a robust shell of aluminum — so much so that Springfield had to mill a slot in the handguard back there to provide clearance for the ejection port door hinge pin. These big sections absolutely prevent handguard rotation. If you’re strong enough to rotate the handguard with these locking it, you don’t need a rifle … your bare hands are probably enough.

The end result is a set of features that add up to a lot more than the typical M4gery, even more than the usual raft of “improved” carbines. At 6¾ pounds, the bare Victor is light, handy, well-balanced and fully featured.

The Trials of the Victor

In testing, I found that the trigger was very nice and easy to use. The Victor was quite accurate, and because it wasn’t a fat quad-rail handguard, it was easy to shift from target to target.

The muzzle brake calls for some comment. It’s a dual-port design with a pair of vertical vents to aid in keeping the muzzle down. I can tell you that it works. The muzzle did not come off the target when chrono-ing and doing drills. In fact, the muzzle brake was so effective — diverting so much gas to the sides and back — that I had to shift my shooting position next to my chrono. The Labradar cranks on the radar beam when the vibration of a shot tells it to. The blast from the muzzle brake was so jarring if directed at the Labradar that it (the Labradar) could not read bullets until I shifted my position to keep the direct blast off the box. The Victor locked open when empty and cycled with all loads. The 16-inch barrel gave a good amount of the potential velocity to be gained from the 5.56 NATO ammo, and I had no surprises in velocity or accuracy. No doubt, the mid-length gas system also aided in the soft recoil, because the gas hammering into the carrier comes later in the cycle at a lower pressure and provides more of a push and less of a jolt.

Should You Consider It? In a world of commodity-grade ARs that can be had for $600, is the Victor worth the upgrade? I say, “Yes!” You get sights on the rifle, and you get a first-class barrel that has been Melonite treated. You get a top-level stock and a very nice trigger. The handguard free-floats the barrel and has plenty of M-Lok slots for mounting gear.

Is it a ready-to-go competition rifle? No. But those start at twice the cost of the Victor. And it isn’t mil-spec — it’s better.
If you want to get started, the Victor is a great base carbine to build on. And if you want something that’s ready to go and not expend any extra effort, the Victor is for you.

Just in case you hadn’t made the connection, Saint Victor was beheaded in 303 A.D. in Milan, then a city of the Roman Empire called Mediolanum and the base of Emperor Maximium, co-emperor with Diocletian. Who says the model names of firearms can only be modern tactic-cool?
“Never a victim. Always a Victor.” Sounds good to me.