Working with ballistic gelatin is not hard or easy, but it is quite involved.

What Are The Basics Of Mixing Ballistic Gelatin At Home:

A block of ballistic gelatin is not a “bad guy,” but bad guys don’t show up at test labs asking to be shot.

Gelatin (type B) is obtained by the partial hydrolysis of collagen derived from the skin, white connective tissue and bones of animals. Gelatin consists approximately of 86 percent protein, 12 percent moisture and 2 percent ash (“mineral salt”). Typical food-grade gelatin will not provide the consistency required for ballistic testing. Ballistic gelatin provides a repeatable medium for testing a bullet’s penetration, expansion and integrity, all of which influence the bullet’s terminal performance.

Most shooters mix the gelatin in open molds placed in a refrigerator. Gelatin doesn’t have an appealing odor and, until it sets up, it can spill. I found that an easy way to make ballistic gelatin is to use half-gallon cardboard milk or orange juice containers with a screw-off top for a mold. (No, this does not conform to FBI testing standards, but because I don’t work for the FBI, I don’t care. If you’re conducting your own terminal ballistics tests, you shouldn’t care either.)

To contain the bullets from most defensive handgun cartridges, you will need three 4.66-pound blocks formed in these half-gallon containers. If you place them end to end on a flat surface, you will have 24 inches of gelatin to shoot into.

It’s generally rather easy to shoot twice into one end of the three blocks and twice into the other end. This procedure allows you to test at least four bullets with three gelatin blocks; and the center gelatin block becomes the catch block.

As long as bullet paths do not cross, your results should be sound. Actually, tests have shown that even when they do cross, results vary by such a minimal amount that it’s statistically irrelevant.

What You’ll Need and How to Make It

Heat the water to 140 degrees (F) and add 1.7ml of foam eater and 0.5ml of cinnamon oil. Foam eater cuts down the foam while mixing, and the cinnamon oil aids in the prevention of bacteria and lessens the nasty smell.

With the help of a friend, pour the water into a bucket while pouring the gelatin in at the same time. Then, aggressively stir the mixture for about 10 minutes or until the gelatin is dissolved.

Using a funnel, fill the half-gallon container through the screw-off cap. Screw on the cap and let the container cool for four hours at room temperature. (Write the time and date on the containers with a marker pen). After cooling, place the container in the refrigerator for 24 hours. The temperature should be about 39 degrees (F).

The temptation will be to adjust your percentages of the mix by the size of blocks you wish to make. You can concoct your own open-top molds, but it is unnecessary for handgun bullet testing. The problem with this is that working with more than a half-gallon becomes tedious in a home kitchen, and the potential for a divorce-causing mess exists! Spill this stuff inside your refrigerator, and your wife will say words she’s never said as she throws things that should not be thrown. Mix your gelatin—one at a time—in an enclosed half-gallon cardboard container.

The FBI requires that gelatin blocks be calibrated. This is done by firing a .177 steel BB at 590 fps +/-15 fps into the gelatin. The BB should penetrate 2.95 to 3.74 inches. I used to do this, but after never having a block fail the test, I stopped. 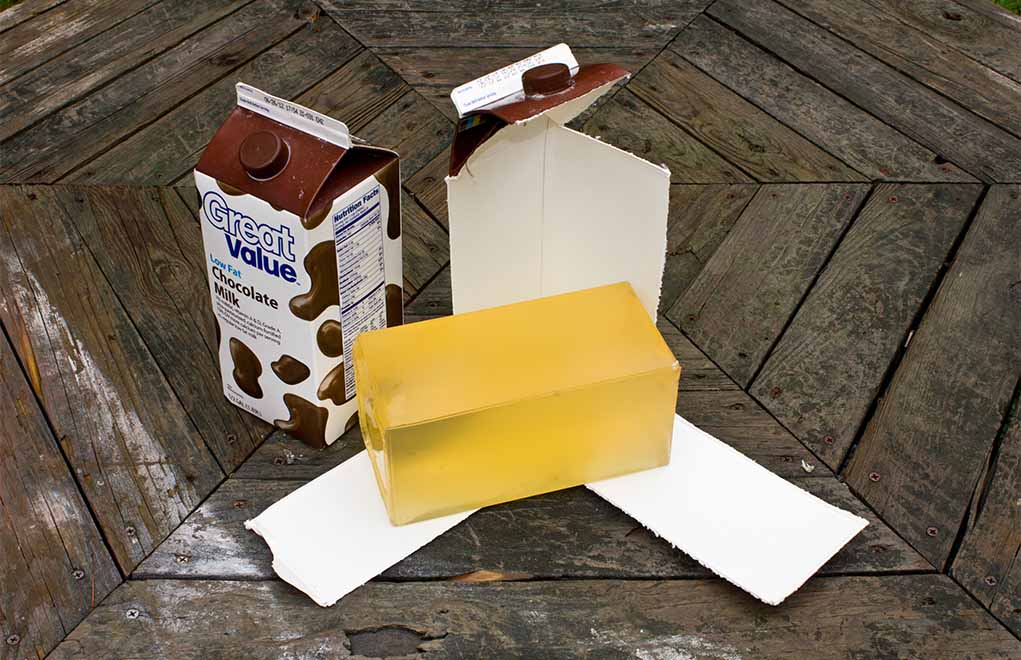 Do you have to calibrate your blocks by the FBI method? Only if you are the FBI. Can blocks that have not been calibrated yield inconsistent results? Yep. Nevertheless, tests have shown that slight variations in block consistency only minimally impact the results. Follow the preparation instructions, and your tests will provide meaningful information.

The cardboard containers make transporting gelatin to the range in a cooler easy. When you set them out to shoot, simply peel the cardboard off. Always shoot into gelatin on a safe range, and don’t assume the bullet will stop in the gelatin or that it will not come out the side. It is not safe to stand beside gelatin blocks when they are being shot at. When shooting ballistic gelatin, all common firearms safety practices should be observed at all times.

Why Test via ballistic Gelatin?

What should you do with the results, and why should you test in ballistic gelatin? You can use the results to compare how various bullets perform in your handgun. You can also place different types of clothing or barriers in front of the gelatin.

Granted, a lot of this information is available on the Internet for a lot of different loads and barriers. However, there is no substitute for doing and learning on your own.