An excellent representation of sniper rifle technology from the 1940s, the Springfield M1904A4 is still plenty enjoyable and accurate today.

The beginning of World War II found the United States short of many weapons, not the least of which was an inventory of sniper rifles.  Armorers in France converted sniper rifles from both M1903 and M1917 rifles during World War I, but between the wars sniping was one of many things that was neglected.  In fact, even after American entry into World War II in December 1941, sniping continued to be neglected and it wasn’t until January 1943 that the Army issued a directive to Remington Arms to set aside 20,000 M1903A3 receivers for conversion to sniper rifles.

There were no formal accuracy requirements for the M1903A4; at least we couldn’t find any standards in any of the four reference books we consulted in preparing this article.  According to Bruce Canfield, there was no special care taken in manufacturing the M1903A4 rifles and their accuracy was no better than standard service rifles. The trigger on our test rifle, for example, was the same as our standard Remington M1903A3, hardly sniper-grade, with two-stage 5.5-pound break and significant overtravel.  There were other shortcomings, as well.  Since no sights were fitted and the commercial Weaver telescopic sights were easily damaged, a damaged scope left the sniper with a very expensive club!

Moreover, the scope wasn’t moisture resistant – a real problem in the South Pacific Campaigns. The Redfield “Junior” mount was nothing more than a commercial unit and the retaining screws reportedly loosened and fell out regularly, and replacements were difficult to obtain through the supply system.  To ensure that the screws of our personal M1903A4 stayed put, we removed them and put Loctite on them. Moreover, the gross elevation of the Redfield mount was adjusted by inserting or removing shims.

We had to shim the mount on our M1903A4 in order to properly boresight and zero it, since it had never been fired when we purchased it.  Initial windage was set by adjusting the large screws visible at the rear of the scope mount.  Whatever shortcomings it might have had, the M1903A4 was the only version of the M1903 to have been manufactured at the factory as a sniper rifle.  All others were field conversions.  The M1903A4 was intended as a stopgap until the M1 Garand could be redesigned as a sniper rifle, but in the end only a very few M1C sniper rifles saw action in World War II, while the M1903A4 was used in every theater of operation throughout the war.

Because there was no way of predicting whether or not a M1903A3 being manufactured as an M1903A4 would deliver acceptable accuracy, all M1903A4s were marked, “US Remington Model 03A3,” but the markings were different from standard M1903A3s in that they were offset to the left so they would not be covered by the Redfield scope mount.  The idea was that if the rifle wasn’t sufficiently accurate, open sights would be installed and the rifle issued as a standard M1903A3.  Thus, there are no M1903A4s marked as such as far as we have been able to determine.  We should also note that every M1903A4 was made by Remington.  Smith Corona, the other M1903A3 manufacturer, didn’t make any M1903A4s.

Like all M1903A3s, the M1903A4 may be found with any number of variations.  Most had four-groove barrels, but some two-groove barrels were fitted as is the case with our rifle.  According to Major General Julian Hatcher, probably the foremost authority on early- to mid-20th Century military small arms, the two-groove barrel had little, if any, negative effect on accuracy.

In the case of our M1903A4, we have to agree, since it has a two-groove barrel and delivers very good accuracy. M1903A4 stocks were generally the Type C full pistol grip, but many, like ours, were fitted with the semi-pistol grip “scant grip.”  About the only constants were the lack of open sights, the unusual markings, the bolt handle that was forged with a concave shape to clear the telescopic sight and the stock notched to accommodate the non-standard bolt handle. There were two telescopic sights used, both variants of the 2.5x Weaver 330.  The first scopes were marked commercially and had either tapered post or crosshair reticles.  Later scopes were marked M73B1, the military designation for the Weaver 330.  Our M1903A4 was fitted with the tapered post version of the commercial 330, although our rifle’s serial number indicates that it was in the last production batch of 6,300 M1903A4s. The final M1903A4s were manufactured in June 1944 when the M1C started being delivered in sufficient numbers to begin replacing the M1903A4.

There seems to be disagreement among the M1903 authorities on total numbers of M1903A4s manufactured.  According to Canfield and Clark Campbell, the number was 28,365.  On the other hand, Brophy states that 29,964 were produced. We probably will never know exactly just how many were manufactured, except that the M1903A4 represents a tiny fraction of the more than 1 million M1903A3 type rifles produced by Remington during World War II.  When Smith Corona production is added to the mix, the total M1903A3 production rises to nearly 1.5 million.  So it is clear that the M1903A4 is one of the rarest production M1903s ever made, which has driven prices into the $3000 range for an example in good condition.

The M1903A4 soldiered on after World War II, despite M1C and M1D sniper rifles that supposedly replaced it.  M1903A4s were drawn from storage for the Korean War and surprisingly also saw service in Vietnam during the early stages of the conflict before other, more modern sniper rifles could be procured.

This made the A4 the last version of the M1903 to remain in military service.  The M1903A4 thus saw active military service for over 20 years, indicating that it must have had some positive attributes.  Just how good was the M1903A4 for its intended purpose?

According to Brophy, the M1903A4 was “…at best a poor excuse for a sniper rifle.”   The M1903A4 had no special attention given to its accuracy or its suitability for use as a sniper rifle.  The Weaver scope had the benefit of being cheap and available and little else other than being simple to install.  But in the context of the time, the M1903A4 wasn’t really significantly inferior to sniper rifles from other nations.  The Russian PE and PU sniper rifles with their 3.5x scopes were really no better, nor was the German 98K.

The British Number 4, Mark 1(T) wasn’t either.  All were essentially bolt-action service rifles that were pressed into sniper service, except for a few 98Ks that were specially made up as sniper rifles.  The M1903A4 was actually no better nor worse than other sniper rifles of the time.

When compared to sniper rifles from the Vietnam era, the M1903A4 comes off as inferior, but at the time of its introduction it did its job and from what research we have conducted, did it relatively well. As mentioned, our test M1903A4 was unfired when we discovered it in a local gun store and purchased it at a very reasonable price.  Since it was new, we were advised by some that the rifle should remain in unfired condition to preserve its collector value.  Nonsense.

We don’t own firearms that we don’t shoot and so shortly after obtaining our M1903A4, we boresighted it and headed to the range to zero it.  We zeroed the rifle using Black Hills 168-grain match grade ammunition, but for this evaluation we also tested the ‘03A4 with Greek 1985 production military M2 Ball, duplicating the World War II 150-grain military load. 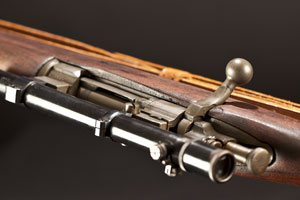 We also tested Serbian Privi Partizan 180-grain ammunition, imported by Wolf.  The Black Hills match delivered 1.25 minute of angle (MOA) at 100 yards.  Translated into layman’s terms, that is 1.25 inch at 100 yards, 2.5 inches at 200 yards, etc.  For what it is worth, MOA (one inch at 100 yards) accuracy is considered acceptable for modern sniper rifles, so the ‘03A4 – at least our ‘03A4 – gives up little to modern precision rifles in terms of accuracy.

Surprisingly, the Greek 150-grain ball ammunition was as accurate as the Black Hills 168-grain match, probably because the M1903A4 was designed around the M2 ball round.  The Seriban Privi Partisan was about two MOA at 100 yards.  The bottom line is that our M1903A4 delivered acceptable accuracy that would probably improve once the barrel was broken in by having a couple of hundred rounds fired through it.

The M1903A4 is an excellent representation of sniper rifle technology of the 1940s.  As we have mentioned, sniper rifles of both our allies and enemies weren’t superior to the ‘03A4 in any meaningful way and the rifle delivers good accuracy using quality modern match or service grade ammunition.  World War II snipers didn’t have access to match-grade ammo like their modern day counterparts, so the Greek ball ammunition test groups are probably more in keeping with battlefield reality.

Probably the most significant shortfall of the M1903A4 was its scope, but it must be remembered that during World War II, everything was in short supply and the Army had to get its scopes from a company that could deliver the necessary quantities within a short time, so it went with the Weaver 330, which was good enough for the task at hand.  All in all the M1903A4 was satisfactory for its intended purpose and like most soldiers and Marines of the period served its country well.

Everyone who shot our “old soldier” was overjoyed at being able to shoot a rare piece of American military history.  We probably will not shoot our M1903A4 frequently, as it is too rare and valuable for frequent trips to the range, but rest assured that it will continue to do what it was designed to do – shoot with reasonable accuracy from time to time and deliver some enjoyment in the bargain.

This article appeared in the January 31, 2011 issue of Gun Digest the Magazine.